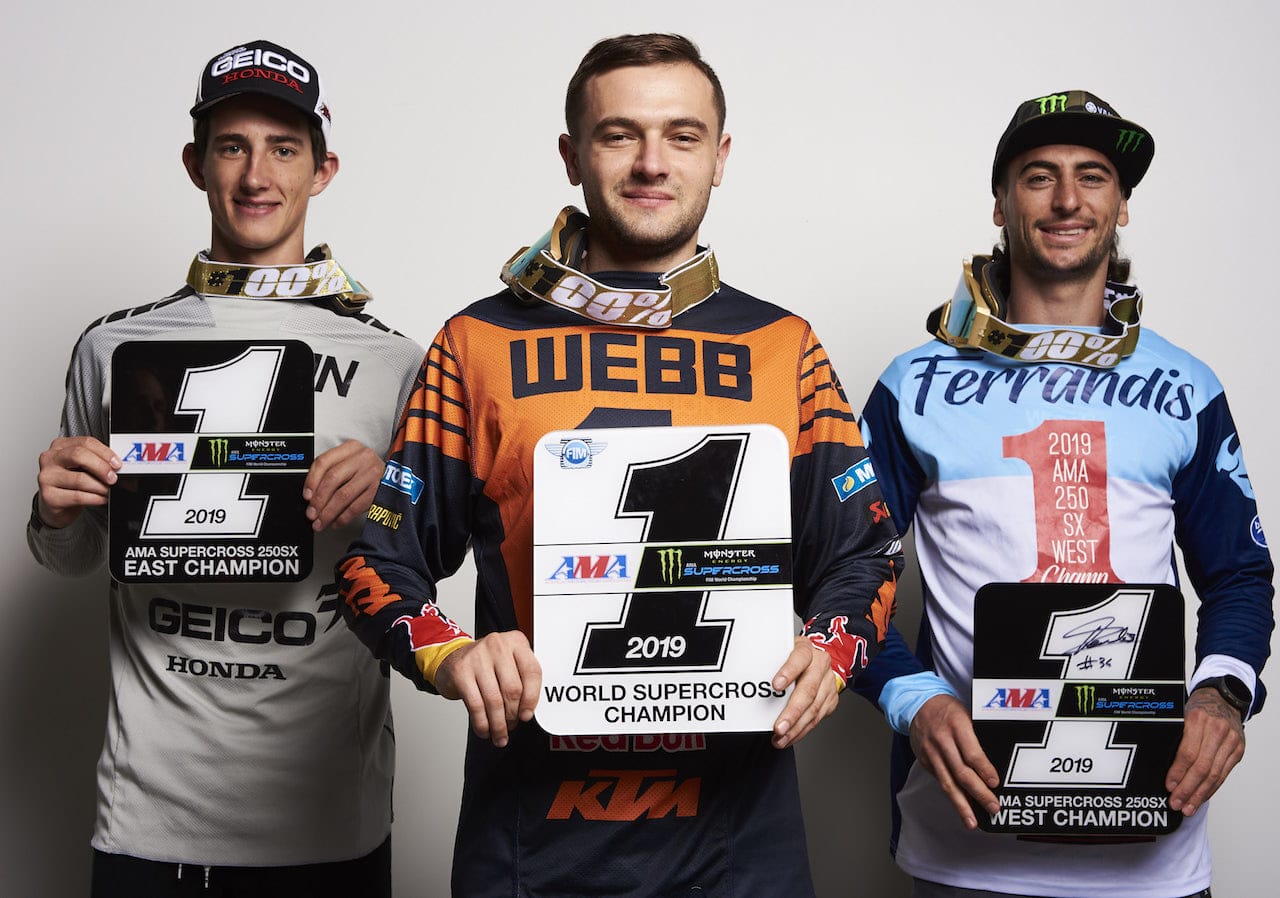 For the first time in 27 years, one goggle company swept all three Supercross Championships.

With all three 2019 Supercross Champions wearing 100% goggles, and the opening round of the Pro Motocross season approaching rapidly, the timing was perfect for the launch of the all-new 100% Armega Goggle. 100% invited us down to their offices in San Diego to check out the launch, learn about the new product and go test it out on a private track.

David Bailey kicked off the event with by giving us the history and background of the 100% brand, along with racing footage from the early 1980s that was filmed by David Bailey’s Dad. David has been with 100% since the beginning and he’s still involved today by speaking events and helping with product development on the cycling side of the company. During his speech, David honored 100%’s original owner Drew Lien, by explaining his attention to detail and his passion for creating products that represent what the brand stands for, giving 100% effort.  David also commended the current owner of 100%, Ludo Boinnard for sticking to the roots of the brand and carrying the legacy by continually asking the question, “what would Drew do?” 18 of 100%’s top athletes were in attendance for the Armega Goggle launch.

During the presentation, some of 100%’s top athletes were acknowledged for their recent accomplishments and a few were interviewed as well. They each talked about being apart of the 100% brand and what it means to them. Marvin Musquin expressed that his parents have known Ludo and Mark, the owners of 100%, since Marvin was young and that they have been like family to him.  Cooper Webb mentioned that he’s been with the company since 2015 and he’s enjoyed winning four Championships with them. Cole Seely and Dean Wilson also shared their appreciation for 100%.

Peter Sagan was also at the launch of the new Armega goggle. If you haven’t heard of Peter Sagan, we call him the Ken Roczen of cycling. He is a six-time Tour De France Sprinters Champion and he has the bike skill to wheelie a 10-speed road bike with the skinny tires wherever he wants. Peter is not the normal cyclist, he is different from the rest and his presence adds a level of excitement to any race he competes in. A few years ago, Peter reached out to 100% and the sponsored ship began and 100% sunglasses were introduced into the cycling industry. Since then, the cycling division has been a huge success. Peter even wears 100% goggles around his neck on the podium, just like the Moto guys. The new goggle has a lot of cool new features like an ultra HD lens which improves clarity, a sweat management system to help keep the sweat from dripping into your eyes and onto your lens and a 6-point molded locking tabs that allows for an easy install and removal of new lenses. Marvin Musquin and Colton Haaker were having a good time catching up. Colton recently won the SuperEnduro World Championship and Marvin finished third in the 450 Supercross Championship. After the presentation, the showroom was full of Champions, factory riders and cameras as we got our hands on the new goggle. Justin Cooper had a great Supercross season, he finished second in the 250 East Coast Championship. Justin told us that he was excited to try the new goggle and he was looking forward to using it during the nationals. We got done at the offices just before lunch and we headed out to the top-secret Vogt Ranch to test out the Armega goggle. MXA’s Armega goggle case. Inside were two pairs of goggles, a t-shirt and tearoffs. Colt Nichols puts on the new goggle for the first time. The Star Racing Yamaha team came out to Vogt Ranch to ride the private track and try out the new Armega Goggle for the first time. The 2019 250 West Supercross Champion doesn’t have time to relax and celebrate his Championship. He’s still training full-time in preparation for the Pro Motocross series to start at Hangtown May 18th. Colt Nichols was on the gas. Colton Haaker was ripping around on a two-stroke. Justin Cooper was very impressive at the Nationals last year. He finished third overall in the 250 Championship point standings in his first full outdoor season. MXA INTERVIEW: RYAN VILLOPOTO’S THOUGHTS ON VEGAS, THE SEASON AND HIS PLANS