In 1929, Czech engineer Frantisek Janecek bought the rights to the German Wanderer motorcycle brand from Winklhofer & Jaenicke and moved it to Prague. Combining the first two letters from Jaenicke and Wanderer, he named his motorcycle company Jawa. After WWII when the communists took over Czechoslovakia, they combined the three major Czech motorcycle brands, with CZ and Jawa being joined and ESO being closed down in 1964. This eventually led to Jawa focusing on off-road bikes and CZ specializing in motocross bikes—although they both competed in both disciplines until 1972. Jawa last raced the ISDT in 1989.

Jawa dominated the International Six Days Trials (ISDT) during the 1960s by building a purpose-built machine designed for the rigors and rules of this competition. Jawa competed in Six Days in almost every displacement category: 50cc, 75cc, 125cc, 175cc, 250cc, 350cc, and 500cc. Typically, half of the factory Six Days machines built each year were reserved for the Czechoslovakian national team, all of whom were supported by the government through their military sports program. Jawa’s ISDT machines were hand-built using sand-cast cases and hand-laid fiberglass fuel tanks, air boxes, fenders and number plates. The magnesium side case splits vertically on each side, which allows quick access to the clutch and five-speed transmission on the right side and the magneto/points on the left. Especially unique is that the entire crankshaft, rod, piston and transmission could be removed without removing the engine from the frame. This design allowed the Czechs to work around the ISDT rule that required the engine to be wire-sealed to the frame. This was not considered cheating. It was just playing the game. The Jawa Gelandesport also featured the famous banana frame, a fully enclosed chain, dual-ignition coil system and a giant CO2 cartridge for fixing flats on the trail. The center stand was perfectly balanced so that the wheels could be removed with the bike on the stand. Only a handful of the Gelandesports were imported into America. Importer price was rumored to be $1500. Compare that to a 1968 Montesa 360 Cappra at $1140. 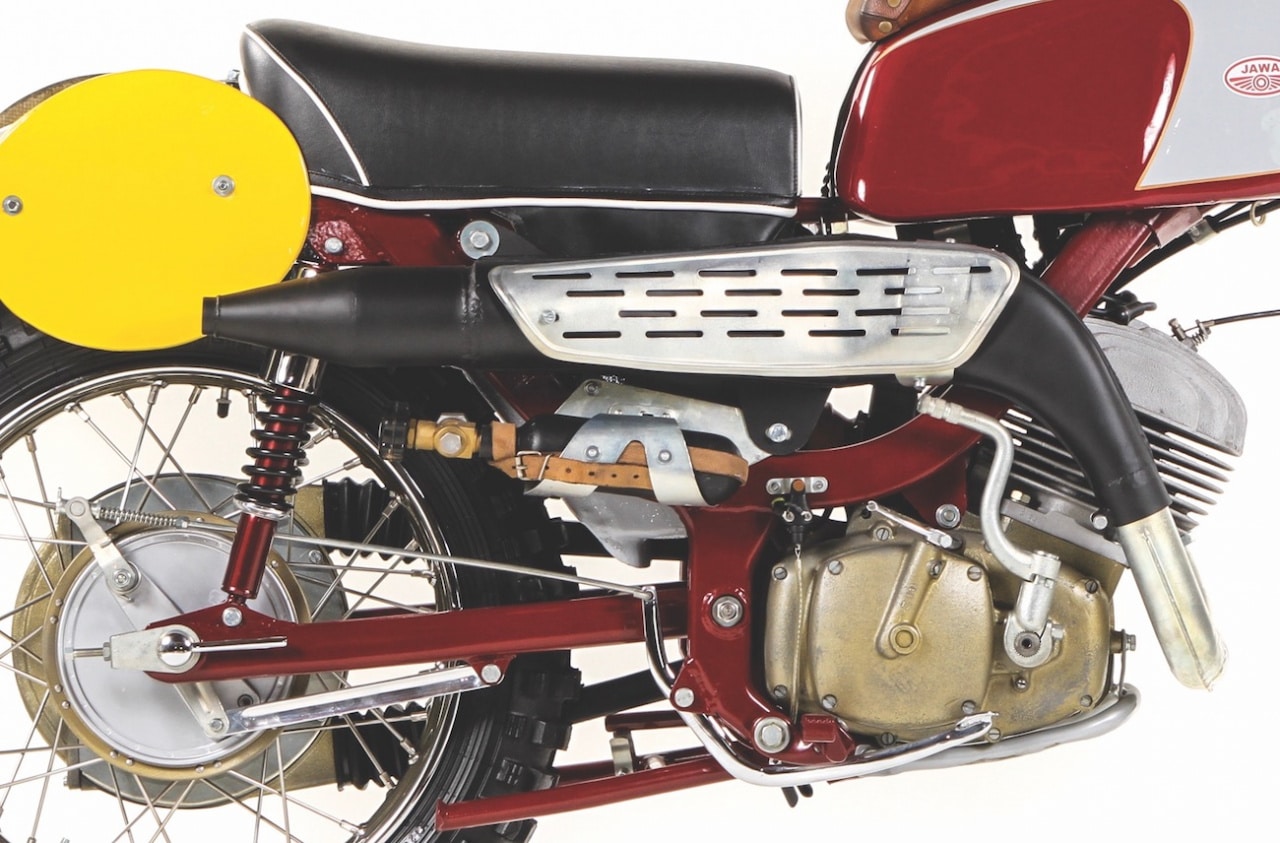 If you are in the market to collect a 1968 Jawa 350 Gelandesport, make sure it has complete hand-formed fiberglass bodywork, a giant CO2 cartridge, tank bag with tools, fully enclosed chain and distinctive two-piece exhaust system. They are currently valued at around $10,000. MXA’s featured “banana frame” was imported by North Bay CZ back in 1969 and is currently on display at the Early Years of Motocross Museum. TODAY’S BIRTHDAY BOY: THE WORLD CHAMPION WHO PACKED HIS BAGS AND HEADED TO AMERICA

HAVE YOU SEE THE NEW MXA? THE FEBRUARY 2022 ISSUE IS OUT…