If you are lucky enough to find a 2016 KTM 450SXF Factory Edition in your local friendly dealer’s showroom, or happen to be among the lucky motocross racers who already got one, here are some of the pertinent facts you need to know.

(1) The difference. Apart from the glitz and glam of gold-anodized parts, a front brake rotor guard, Akrapovic muffler and D.I.D. rims, the only significant difference between the current 2016 KTM 450SXF motocross bike and the 2016-1/2 KTM 450SXF Factory Edition V motocrosser is the WP 48mm AER forks on the Factory Edition V. There are some minor shock valving changes, but nothing wholesale—just more low-speed compression damping. For all practical purposes, the 2016 Factory Edition is a 2016 KTM 450SXF with air forks, orange frame and some added glitz.

(2) What does AER stand for? It is the Greek word for air. More accurately, it is one of two words that Greeks use for air. The other is aether, but that is typically used to describe the upper atmosphere above the clouds. AER is not an acronym for a made-up technical jargon; it’s just a way of spelling air without using the word air.

(3) Unique forks. The WP AER forks are quite unique in that they share very little with other motocross air forks on the market. In many ways they are ingenious in their simplicity. Only the left leg is charged with air, and that air is contained in a sealed cartridge (think of it as a bicycle pump). The standard air pressure is 156.4 psi—and KTM provides a pump with every Factory Edition V. Unlike PSF or TAC forks that use either a coil spring or separate balance chambers to eliminate top-out, the WP AER forks work on the same principle as a rifle. It used the compressed air that is generated from fork movement to dampen the fork on its return stroke. And, it does this with no moving parts. Instead, the air cartridge has a bump-out that works as a controlled leak when the 34mm cartridge rod piston goes by it. Thus, in one up-and-down stroke, WP is able to use the same air pressure in two different directions. The damping is in the right fork leg and consists of 36 adjustable clicks of compression (on the fork cap) and 36 rebound clicks (under the fork leg). The standard settings are 15 clicks out on both compression and rebound.

(4) Verdict. Every MXA test rider felt that the AER fork was a big step up from the current 4CS fork—this is especially appreciated by fast Intermediate and Pro test riders who weren’t the target audience of the 2016 WP 4CS setup spec. The AER fork is much more resistant to bottoming and very sensitive to clicks. We believe that these are the best air forks made—they are that good. Plus, they are simple to work on and easy to live with. Almost every speed test rider, from Novice to Vet to Pro, dropped the air pressure from the recommended 156.4 psi to something in the 140 psi range. As for ballpark numbers, we think that a fast rider will probably run between 145 to 150 psi with 16 clicks out on compression and 15 clicks out on rebound. The setting for an average Vet rider would be 140 psi (or less), 20 clicks out on compression and 15 clicks out on rebound. On the shock we ran 105mm of sag, the high-speed compression turned out to 2-1/4 turns, and the rebound turned in a couple clicks from stock.

(5) AER problems. Air forks aren’t the same as coil-spring forks. They follow the ground differently, and most test riders prefer coil-spring forks like Yamaha’s SSS Kayabas or WP’s Cone Valve kit forks. That said, most of our complaints about the WP AER fork revolved around getting the fork to settle into corners without riding too high. We tried everything from different race sag to every air pressure setting in the book, which allows a max of 217.6 psi and a minimum of 116 psi. We also had issues with the seat height of the Factory Edition V, even though it has the identical chassis as the 2016 bike. It was natural for the MXA gang to blame the chassis differences on the only major component that was changed—the AER forks.

(6) Guess what? The AER forks were to blame, but not in the way we first assumed. We discovered that the AER fork tubes are longer than the stock 4CS forks. How much longer? The AER fork tubes are 953mm long, while the 4CS forks are 941mm. That is 1/2 inch in America (approximately 12mm elsewhere). To test whether the forks were causing our handling issues, we slid them up until 12mm of fork leg stuck out of the top of the clamps. Voila! The front end felt better positioned on the chassis, and we got the seat height closer to where we wanted it. Depending on track designs, we raised the forks as much as 17mm above the triple clamps. Please note that we aren’t changing the frame’s head angle by doing this, we are returning it to where it should be.

(7) Model-year confusion. In the good old days, next year’s bikes were not released in August, September or October of the year before as they are today. If you wanted a 1973 Maico, you had to wait until 1973 to get one. They didn’t come out late in 1972, and certainly not in the middle of the summer of 1972. If it said 1973 on the inspection plate, they wouldn’t be in the showrooms until 1973 rolled around. Then, the men in the front offices realized that if they could get the 1985 models out in December of 1984, they would get a jump on the other manufacturers and sell some extra bikes to Sun Belt racers. Pretty soon those December releases became November, then October, then September. However, the new Factory Edition was either the latest 2016 model to be released or the earliest 2017 model. KTM bills it as a 2016 model, which has many people adding the one-half addendum to it—the 2016-1/2 KTM 450SXF Factory Edition. (9) The production rule. When the 1986 production rule was first implemented, Roger DeCoster was Honda’s world team consultant, and his riders were sitting on exotic, one-off, custom-made, $50,000 Honda works bikes. They shared almost zero parts with the production CR250s and CR125s of the time, and Roger liked it that way—what team manager wouldn’t? However, in one fell swoop the AMA production rule banned Team Honda’s works bikes, and sent Roger and his HRC minions back to the drawing boards to try to turn the production bikes into semi-works bikes. Don’t cry for Roger; he still had David Bailey, Ricky Johnson, Jeff Stanton, Jean-Michel Bayle, Doug Henry, Micky Dymond, Steve Lamson and Jeremy McGrath in his employ. They were good workers and got the job done on the production-based bikes. Now, 20 years later, Roger DeCoster is at KTM, and whether by design or accident, Roger found a way to defeat the AMA production rule, which requires all AMA Supercross bikes to start as off-the-showroom models. By the letter of the law, the KTM Factory Editions are off-the-showroom models, but in reality they are works bikes—although the 2016 model isn’t as much of a ground-breaking bike as the Factory Edition I or Factory Edition IV.

(10) How the homologation rule works. Under AMA rules no one can race a bike that isn’t sold to the public. All good. At least 400 bikes must be offered for sale to the public (this number is selected to keep the factory teams from building 10 bikes—and giving all of them to the race team). All good. Where the AMA homologation rule goes wrong is that the AMA does not demand that the 400 bikes be available to the public before the racing season starts. Instead, the first half of these bikes don’t have to be available until March 1, and the second half doesn’t show up until the Supercross season is over.

(11) What about Honda? KTM is not cheating. There is nothing stopping Honda, Yamaha, Kawasaki, Husqvarna or Suzuki from using the same loophole. But with the Japanese manufacturers’ strict adherence to their four-year production schedules, it would take Honda 20 years to produce five CRF450 Factory Editions of any value. As for Husky, KTM has to go to incredible lengths to produce 650 new bikes six months early—adding Husqvarna Factory Editions to the mix probably isn’t feasible from a production line viewpoint.

(12) Assembly line. For 2016 KTM sent 650 Factory Edition Vs to the USA and Canada, but other countries around the world will get a shot at the 2016 Factory Editions. 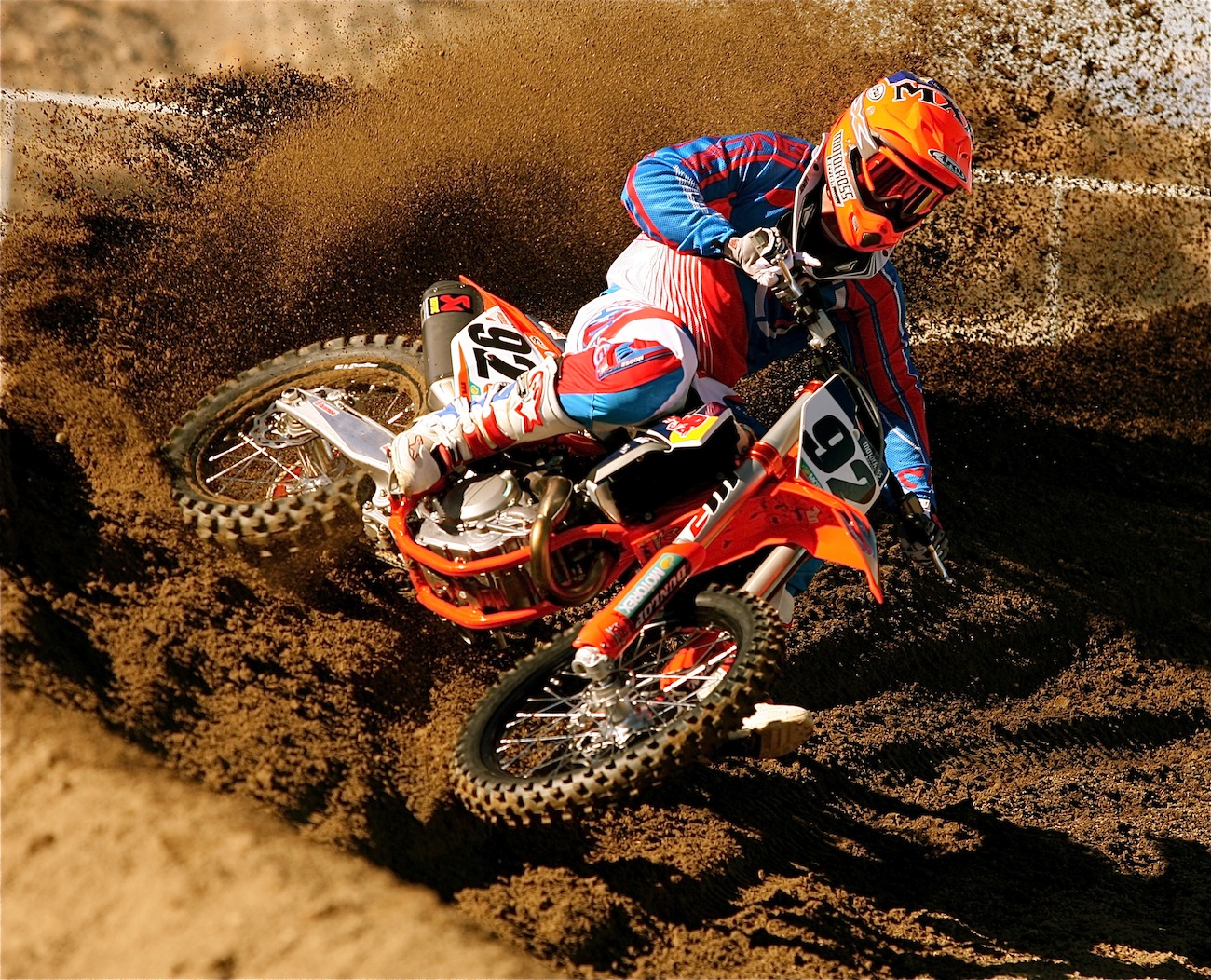 (15) The diet. KTM lost 3.5 pounds by spec’ing WP air forks and an Akrapovic muffler on the 2016 450SXF Factory Edition. The weight would be lower, but the Factory Edition gets a heavier ribbed seat cover, stick-on (instead of in-mold) graphics and a front disc guard.

(17) Akrapovic slip-on. Although we like the idea of the Akrapovic pipe as an add-on, when you think about it, most American riders have their favorite exhaust systems, and it isn’t Akrapovic. Thus, an Akrapovic exhaust isn’t really value added. And, we are suspicious that KTM just spec’ed a slip-on muffler because they can’t get the stock exhaust off the KTM chassis, either. We tested both the AKrapovic muffler and a srock 2016 KTM 450SXF muffler and the bike ran better with the stocker.

(18) Almost gone. Back in 2011 KTM’s management had plans to drop the 450SXF from their model line. They had drunk the 350cc Kool-Aid and were going to commit everything they had to that formula. Thankfully, Roger DeCoster told the KTM executives point-blank that if they didn’t have a 450SXF in their model line they would never get a top-flight AMA Pro to ride for their team. Without DeCoster’s persuasion, there would never have been a Ryan Dungey at KTM.

(19) Shock spring. MXA has whined incessantly about the rear-shock spring rate on the 2016 KTM 450SXF production bike. It is too stiff for anyone under 190 pounds. We were surprised to find the same 48 N/m shock spring on the Factory Edition V. We are positive that the stout 48 spring will be replaced with a 45 on the 2017 model.

(20) Cold-weather trick. There is a trick to starting the Factory Edition V when the weather is cold. First, press the starter button, but not enough to start the bike, just enough to get the fuel pump clicking over. This activates the LiFeP04 (lithium-iron phosphate) battery. Iron-phosphate batteries get stronger as they get warmer. Wait 20 seconds and repeat the same procedure. Depending on how cold it is, you may need to do this three times. Then, reach under the throttle body and push the yellow dial up. This is the cold-start button. And while most cold- and hot-start buttons are pulled out to engage them, the Factory Edition’s is pushed in. Now, push the starter button again. Don’t overdo it. Just hold it down for a few seconds and—voila—the bike will start. You will not need to do this trick after the first time the bike starts, but the colder the morning, the harder the bike will be to start the first time.