We normally ignore doomsday predictions. They never come true. Do you remember the Y2K hysteria, or the Nostradamus hype? There is, however, a new end-of-the-world scare! It is the much-hyped extinction of the two-stroke. Are we scared? No. Why not? Because no self-respecting motocross racer would move from a two-stroke to a four-stroke unless it was better. Two-strokes will thrive as long as they are competitive. And, when the day comes that they aren’t up to snuff, we won’t shed a tear if they join the dodo bird on the extinct list.

Yamaha is more than aware of the coming dominance of four-strokes in the marketplace (after all, they started the trend). And, if anyone will see the writing on the wall first, it will be Yamaha. The blue machines have reigned supreme in the 125 class since 1996, but 2003 marked the first year that YZ125 sales have dropped off. Were other brands stealing Yamaha’s YZ125 sales? No. Yamaha was stealing sales from itself with the YZ250F. What a wake-up call! Yamaha could easily have seen this sales dip as a precursor to the end of two-strokes (and saved all their R&D dollars for the upcoming battle in the 250F race with Honda, Kawasaki and Suzuki), but they didn’t. Instead they went back to work on the YZ125 two-stroke. 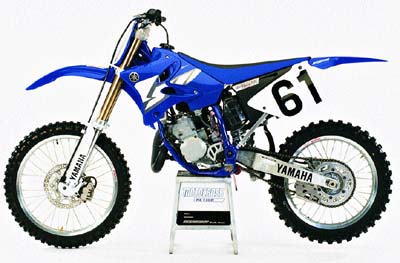 A: Believe it or not, they lowered the compression. That is blasphemy in the 125 class, where high compression is king. Increasing compression is the easiest way to create horsepower. It is also the quickest way to shorten the lifespan of a top-end. For ?04 Yamaha dropped the compression ratio from 11.0:1 to 10.8:1. It’s not a huge change. We couldn’t actually feel it on the track, but hopefully we’ll feel it at the piggy bank.

Since lowering the compression would decrease low-end bark, Yamaha extended the head pipe by 5mm. In case you don’t know, a longer head pipe produces improved low-end performance. Yamaha gave up some low-end in the cylinder head and then got it back in the exhaust system.

A relatively small mechanical part that produces a big impact on the ?04’s engine performance is the power valve governor spring. Last year the YZ125 powerband had a dip the size of the Grand Canyon when the Power Valve opened (directly between the low-end and midrange). No more! A series of minor Power Valve mods erased the dip and improve throttle response. Very sweet and very noticeable.

A: Apart from smoothing the corners on the exhaust ports, the answer is no. If you expected Yamaha to fight back against the YZ250F with a 39-horsepower fire breathing two-stroke, then you don’t understand the limitations of mass producing a pump gas engine (and Yamaha can’t asked its owners to run race gas).

A: This is a dog fight between two vastly different machines. One fighter is faster, has more torque, climbs better and has almost unlimited rev. The other is lighter, quicker, more agile and is able to trade its lack of max power for immediate throttle response.

Which is which? The YZ125 produces enough power to beat the YZ250F because the YZ125 power delivery is quicker and snappier, but it’s no secret that the YZ250F makes more power and delivers it over a broader range. The YZ125’s handling has the advantage of light weight (it’s a full 20 pounds lighter than the YZ250F in race trim). That agility lends itself to inside moves and quick thrusts.

If the track is fast, steep and hard, the YZ250F will shoot the YZ125 down three times out of five. But, if the track is tight, twisty, littered with technical jumps and stop-and-go corners, the YZ125 will riddle the 250F with bullets.

Q: DO I STILL NEED TO ADD A TOOTH TO THE REAR SPROCKET?

A: In stock trim, everyone loved how long each gear pulled, but worried about the amount of clutch needed to get out of corners in second gear. Going to a 49-tooth rear sprocket shortened the pull in every gear, but makes carrying second gear through the corners much easier. It also made third gear more usable. We have geared every YZ125 since 1996 down one tooth-we’re not going to stop now. Q: WHAT IS THE SINGLE BIGGEST IMPROVEMENT FOR 2004?

A: The MXA test rider’s main complaint last year centered on the old school, 46mm Kayaba bumper forks. Every manufacturer, save for Yamaha, had updated to bigger fork legs. Not that a larger fork diameter automatically equates to a better fork, but it does offer a more stable platform, less flex and voluminous hydraulic capacity.

Yamaha’s jump from 46mm to 48mm is the single biggest improvement Yamaha made to the 2004 YZ125. And the largest contributor to the new fork’s prowess is the longer hydraulic bottoming cone. Yamaha has eschewed its former rubber-baby-buggy-bumper bottoming system in favor of the very old fashioned, but effective, male/female bottoming cone design.

Q: HOW GOOD ARE THE 48MM KAYABA FORKS?

As for the rear suspension, it is almost faultless. Set the sag right to 100mm and leave it alone. It’s that good right out of the crate.

(2) Chain: It’s a piece of junk. Change it after the first month or you’ll start going through chain guides and sprockets at an alarming rate.

(3) Bars: The bend is fine, but now that Honda has become the first Japanese motorcycle to come stock with aluminum bars, everybody else, save KTM, looks behind the times. (1) Engine: Yamaha’s 125 engine is a modern marvel. It has almost no flaws. We even ran the stock jetting. Ride it, race it, love it.

(2) Suspension: Yamaha has struggled with their bottoming problem for almost a decade, but they took a quantum leap forward this year. The forks are big and they never clank.

(3) Saddle: We love gripper seats (especially ones that have gripper material on the sides and a semi-smooth finish on top).

(4) Footpegs: They are titanium. They would cost over $200 on the aftermarket.

A: In our heart of hearts we think that the Japanese manufacturers are going to cut-and-run on two-stroke development in the near future (our doomsday prediction is 2006), but until then we are pleasantly surprised with the 2004 Yamaha YZ125. It’s better than we expected. This could have been the year that all the YZ125 got was BNG (Bold New Graphics). Instead, Yamaha delivered a 125 that will once again be at the head of the two-stroke class. No doubt about it!

THIS WEEK’S BIRTHDAY BOYS: MARTY WOULD HAVE BEEN 64, BUT HE’LL ALWAYS BE…