This past two weeks have been busy for the MXA guys. We have been at Red Bud, Mt. Morris, Glen Helen, Piru and Racetown/395. We also had business meetings with Yamaha and Kawasaki and have been busy testing bikes and products on a daily basis. We don’t have a slow time, but since our primary focus is in testing motorcycles…and we especially enjoy new bike season.

Between our travels and meetings, we have started testing several 2012 bikes and while our testing of each bike takes place over a very long a period of time?we thought that every two-stroke fan would like to see a quick impression of the 2012 KTM 250SX (since we have raced it a couple times, worked with KTM on its setup and are moving forward on what we think will eventually be a fairly detailed analysis of how to make it work better). This isn’t a test in the true MXA sense of the word, but a quick view at what the bike is like. Over the last two weeks MXA has raced the 2012 KTM 250SX in six different classes. We have also shot the studio photos, ran the dyno tests (and tried a few different settings on the dyno), did the action photos, worked on the forks (twice), tested aftermarket pipe combos and, in general, drove KTM’s Tom Moen crazy with our requests.

Step one of our initial tests session, after all the previous steps, was to let a variety of test riders spend time with the bike. The first group included AMA Pro Dennis Stapleton, John Minert, John Basher and Bengt Johansson. Each rider got to ride as much as they wanted…and we acquiesced to each rider’s demands in terms of lever position, bars, clickers and, eventually, spring rates. Even through we covered the same ground several times, as we cycled through the test riders, we developed a log of what they liked, what they didn’t like, what they agreed on and what they didn’t agree on. We use this stage of testing to build a base of information that we use for the second stage.

Step two was to make the changes and start with a second group of test riders (this time Willy Musgrave, Billy Musgrave, Jody Weisel and Tom Hinz). These MXA test rider would race the bike in 250 Pro, Over-40 Pro, Vet Novice and Over-60 Expert (and we would take a 2011 KTM 250SX with us for comparison).

The third group of test riders included a few new faces (and we even borrowed KTM’s inhouse test rider Mike Sleeter and Dirt Bike magazines Pete Murray for a few quick laps). The bike was worked on for each test session, but the third group…in which some of the original first two groups came back for more motos… was riding a different setup from what we started with on day one. This round-robin approach is what eventually sniffs out the true nature of both the bike itself and the mods that work. No single test rider’s opinion (speed, talent or lack or common sense) dominates the test cycle?everyone’s opinion is solicited, but every opinion must go through the spin cycle of combined knowledge.

So what did we change?

(1) Handlebars. Every test rider felt that the stock Renthal 672 FatBars were too low. Depending on the test rider, we had three options. First, KTM offers a 5mm taller riser that is less expensive than new bars. Second, the Renthal 996 TwinWall or 604 FatBars are 12mm taller. Finally, the Renthal 997 FatBars is 19mm taller. We went with the 5mm risers.

(2) Fork springs. The KTM two-strokes are global-spec bikes. That means that, unlike the KTM four-strokes, the 250SX gets European spring rates. We aren’t saying anything negative about the Euro settings, but they don’t work. The stock fork springs are 0.44 kg/mm. We immediately switched to 0.46 forks springs for the first set of races, but didn’t get the kind of feel that we wanted. After that we moved to 0.48 kg/mm forks spring. We lowered the stock 390cc oil height down to 375cc to get better control of the midstroke.

(3) Shock link. The stock 2012 KTM 250SX shock spring is a 5.4 kg/mm. For most MXA test riders it was in the ballpark (albeit barely), but most test riders felt that the rear of the bike felt high and that the suspension wanted to drop into the stroke too quickly. To solve both problems we added a 1.25mm longer Pro Circuit shock linkage. It lowered the rear of the bike by 8mm and stiffened up the initial part of the shock’s stroke to make the bike feel more stable…plus it made the 5.4 shock spring fit a wider range of weights and speeds. We were able to move the forks up in the clamps an extra 3mm?which helped lower the bike some more. By fiddling with race sag and fork height we maximized the handling of what can be a really accurate machine.

(4) Jetting. It pinged with the stock 158 jet and needle. Our first step was to change to the optional rich needle (N1EH). For hotter days, faster riders or loamier dirt we would add the optional 160 main jet. In the heat of Summer we might downsize the pilot. 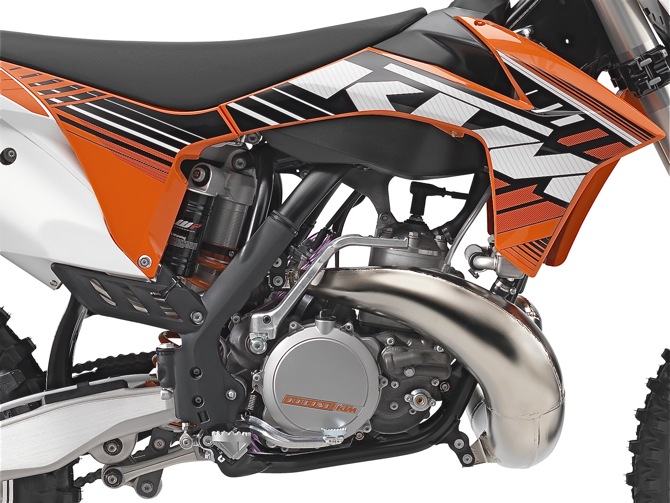 We kept switching test riders so that we could cross-check with them about the constantly changing setup. We took what we learned on the dyno and with the test riders and started to work with the powerband. It should be noted that our 2012 KTM 250SX made 50 horsepower on the dyno. That is a very big number. It ran well, but most MXA test riders felt that our 2011 KTM 250SX had more top-end power and a broader feel across the top (this was confirmed with back-to-back rides and with a dyno run on the 2011 model). Several MXA test riders preferred the overall feel of the 2011 powerband over the 2012.

We wanted the broader top-end back. Our first step was to replace the stock KTM muffler with a Pro Circuit R304 silencer. We gain one horsepower at peak (51 horse) and added about two horsepower as the engine went over the top of the curve. Historically, KTM’s stock silencers have been restrictive and this trick works on almost every year of 250SX.

Next, we added the famous Pro Circuit “Jeremy McGrath” pipe to the KTM. The McGrath pipe was developed back when Jeremy signed with KTM. The current pipe has little to do with Jeremy’s original pipe dimensions, but gets the moniker because Jeremy’s arrival at KTM jump-started Pro Circuit’s KTM test program. Although we didn’t gain any peak horsepower over stock with the Pro Circuit pipe and silencer combo, we gained a bundle of ponies above peak. And we mean a “bundle!”

WHAT DIDN’T WE CHANGE? We loved the no-tools airbox and the Twin-Air filter, but we do think that the smaller size of the new airbox (and the reed stops on the Moto Tassinari VForce3 reed block) might have something to do with the increase in midrange (the 2012 makes more peak horsepower than the 2011 model) and loss of over-rev (the 2011 has a broader powerband after peak).

We left the gearing stock and we had good luck with the stock Pirelli Mid-Soft tires (the four-strokes come with Dunlop MX51 tires).

We loved the hydraulic clutch…it is so good that it makes us dislike every mechanical clutch.

Every test rider loved the 260mm Brembo front brake…and given that it is the best brake in the business on a 450cc four-stroke, it was incredible on a two-stroke. Some test riders had to calm down their normally over-enthusiastic braking

We should mention that the MXA test riders felt that the 2012 KTM 250SX felt heavier than the 2011 PDS-equipped model. Guess what? It was five pounds heavier (we weighed it after the second week of racing and it hit MXA’s incredibly accurate scale at 217 pounds). Since we weighed last year’s 250SX at 212 pounds there is a price to pay for going to linkage. That extra weight comes from the the reinforced shock tower, longer shock, shock linkage and bolts. Even with the extra five pounds, the 2012 250SX was light (just not lighter than the 2011 no-link 250SX). Every test rider who came off of a four-stroke was amazed at how feathery it felt. And, MXA’s YZ250 two-stroke riders thought that it was lighter than their Yamaha’s by a significant amount.

Obviously, KTM’s change to shock linkage on the two-strokes for 2012 is a big deal…but, in truth, it’s not a big deal. Most test rider felt that the shock action on the 2012 and 2011 felt almost identical…but our 2011 shock did have a stiffer spring than it came with. MXA has had good luck with KTM’s no-link rear suspension, but only because we are able to change springs and settings to get it to work…we wouldn’t like it stock. The rising rate linkage allows us to get it in the ballpark quicker with less drama. But, we still think that we will go to a heavier shock spring on the 2012 in the long run.

FROM THIS POINT ON At this point, MXA is continuing to test the 2012 KTM 250SX. The first set of mods will be repeated with each race (and each new batch of test riders?we have ten to choose from). We have more fork and shock settings to try, want to fine tune the jetting, try to get more power with simple mods (even though the 250SX has more horsepower than any other 250cc two-stroke), test the optional power valve springs, and work out the personal glitches of each test rider (or at the very least try of understand their personal peccadilloes). We desperately want to understand our test riders, their problems and how to make them better people.

This process has really just begun. MXA doesn’t rush bike testing. KTM fans won’t see the full fruits of MXA‘s 250SX testing until the magazine that the test will be in comes out in late July. We have a lot to learn, and even more to try, before we are willing to commit wholeheartedly to our official opinion. We want to be sure about the advice and opinion we give…so we will spend as much time as possible getting it right.

But, without telling tales out of school? we like what we have seen so far…especially the fact that the 2012 KTM 250SX retails for $2000 less than its 450cc four-stroke brethren.

LOOKING TO RACE THIS WEEKEND IN SoCAL? HOW ABOUT BARONA OAKS?