This was truly a “Day to Remember,” but for me it was more like six days to remember. However, it was the 6th day that will be etched in my mind for as long as I live. I left on the Wednesday before the Monster Cup on my motorcycle for Las Vegas with the main objective of join Glen Helen manager Lori Wilson for a Thursday meeting with MX Sports to discuss the 2016 AMA Motocross Nationals. Wednesday night was fun as I joined Lori, her sister Karen and Ms. World Vet Motocross Alexis for dinner. Not so bad, three lovely gals, all to myself, and they even tried to teach me how to win at the slot machines. They failed! I enjoyed the meeting, as all of the MX National promoters were in the room. We have become a pretty tight group with only one goal: to put together an amazing MX National series.

I had to leave the meeting early and suffered through a horrible thunderstorm on the Goldwing on the way back to L.A., but arrived home safely that evening. My wife Dani and I were on the first flight out of Orange County the next morning so we could attend the Orlando, Florida, AIMexpo show and participate in the AMA’s Hall of Fame Banquet on Saturday night. Tom White on the big screen at the AMA Hall of Fame Awards in Orlando.

2015 Hall of Fame Inductee John Parham had a special dinner for friends on Friday night and Dani and I were able to join the fun. John is an amazing man and it is great to see him get this recognition. He chose me to be the “ring presenter” at the Saturday night Induction ceremony. Major honor! I also was asked by the AMA to emcee the Hall of Fame reception before the induction ceremony held in the Chapin Theatre. I just encouraged everyone to enjoy all the drinks they wanted in order to get full value out of the exclusive reception ticket. I didn’t have anything to drink as I stumble enough on stage with the microphone anyway and wanted to fully enjoy the induction ceremony.

If you’ve never attended the AMA’s Hall of Fame Induction ceremony, you are missing something very special. Chet Burks has been producing the videos for several years to honor these icons of the sport, and does an amazing job. Everything about this event is just way over the top! Congratulations to the class of 2015: John Parham – Industry and Ambassadors, Keith McCarty – Industry and Ambassadors, Rodney Smith – Offroad Competition, John Kozinski – Road Racing, Alex Jorgenson – Dirt-Track, and Richard Tear- link – Harley Davidson’s past CEO. Motorcycle Hall of Famer Wayne Rainey was recognized as the Legend.

We flew back to California early Sunday morning so I could ready myself for my early Monday departure to Bishop, California. This trip was special because Sunday, November 8, will be the 19th year at the World Vet that we have honored a person that made a major contribution to motocross in America with the Edison Dye Lietime Achievement Award. There are so many racers, promoters, and heroes that are worthy, but we really like to honor the early pioneers that have paved the way for this wonderful sport of motocross that we enjoy. This year we are going to honor Dave McCoy, the man responsible for the Mammoth Mountain Ski Resort, but more important to us, a pioneer in motocross as 2017 will be the 50th year of the Mammoth Mountain Motocross event. The plan was for videographer Mark Kalpakoff and photographer Richard Stuelke to join me for the 4-1⁄2 hour drive to Bishop to interview Dave. I must mention I was seriously jet lagged from ping-ponging from Anaheim to Vegas to Anaheim to Orland to Anaheim to Bishop, Valifornia. We leftt my house (with me driving) at 4:30 a.m. on Monday. We had lots of time to talk on the journey to Bishop. Both Richard and I had some concerns about how to tell Dave’s story in a ten-minute video. We realized that unless you’re a skier or have raced the Mammoth Motocross, people wouldn’t have a clue who this man is. Worse, we were concerned that we wouldn’t do a good job with the video honoring a100-year-old pioneer. We wanted to be sure that everyone at the World Vet Champiobshiop, where we would present the award, but also everyone seeing the video, would not fully appreciate this man’s contributions to the sport of motocross.

We arrived in Bishop in plenty of time for our 10:00 a.m. meeting at Jack’s Pancake Restaurant with the rest of our crew. They included Rick Johnson (Edison Dye Award recipient in 1997 and friend of the McCoy’s and Mammoth since he was 14 years old), Mammoth Motocross Race Director Mike Colbert and Dave’ grandson, Casey McCoy, who runs all the operations at Mammoth’s main lodge. Casey in particular wanted to see his grandpa honored in the right way. I had a vision of what I wanted us to accomplish with the video and discussed that vision with our team. We spent the next hour enjoying breakfast and preparing to go visit the man. The McCoy hacienda in Bishop, California.

We caravaned from the restaurant to the McCoy ranch (which is less than a mile off Bishop’s Main Street. Dave and his 95-year-old wife, Roma, live in a sprawling ranch style home with and uninhibited view of the Sierra Mountains behind them.I’ve got to tell you, as we parked in front of the McCoy home, I was a little nervous meeting this amazing man. At first it was just RJ, Casey, Mike and I that went inside to meet Dave. He greeted us in his office and what an office it was! Hopefully the images and video will do justice to this incredible room that showcases hundreds and hundreds of images and treasures from his amazing life. 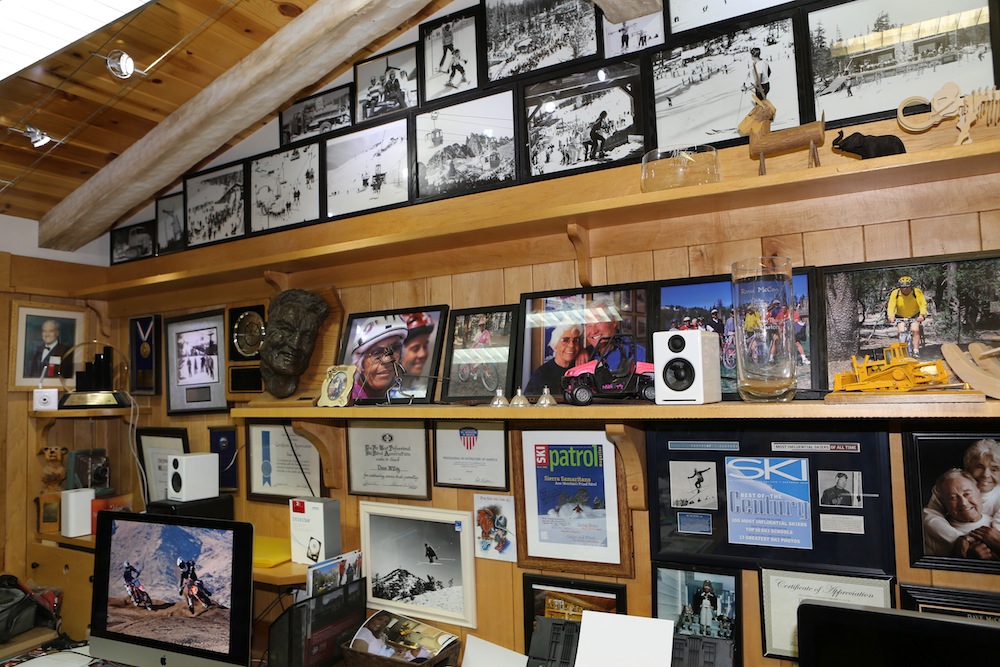 Hundreds of images and treasures from a life well lived.

Before I go any farther, I’d like to share how Dave McCoy I first became aware of Dave McCoy. At the end of my professional flat-track racing career and right at the time I started White Brothers, I needed to find an activity that would fill in for what I was missing as a Pro racer. I chose snow skiing, and spent the winter of ‘75-76 skiing every single weekend. I not only wanted to ski, but I wanted to know more about the legends of the sport. I purchased a book titled “The Other Side of the Mountain” written by E. G. Valens. It tells the inspiring, yet tragic story of rising skiing star Jill Kinmont. And, Dave McCoy was mentioned again and again in the book as Jill’s teacher, inspiration and mentor. A major thread in the story was the training he provided to take her to the very top level of the sport. I invite all of you to read the book. For the next few years I skied at Mammoth Mountain every chance I could get, and knew that it was because of Dave McCoy hat we had this World Class ski resort in our backyard.

It wasn’t until 1981 that I raced my first Mammoth Mountain Motocross, and I have not missed the event since. We should all know that it was Dave McCoy who started and grew this fabulous racing festival into a destination race that so many of motocross’ legends have supported long after their professional careers ended. No other track has hosted continuous races for 50 years. Rick Johnson and Dave McCoy swap racing stories during their trip around the ranch. Note that 100-year-old Dave is doing the driving and professional offroad truck racer Rick Johnson is the passenger.

Dave’s life has always been about enjoying the outdoors and since you can’t ski year around, he put the same emphasis on motocross as he did in skiing. In Dave’s office he a presence that is hard to describe. Dave is as sharp as a whip and he made all of us feel like we had been his friends for life. The walls of his office are covered with motocross photos and treasures that remind him every day of his passion for motocross. He shared story after story about his racing, the motocross event, training and riding with top riders like Jim Pomeroy, Warren Reid, and the man that was going to interview him in our video Rick Johnson. But I want to tell you about the memory that will be etched into my mind until the day I pass. We hadn’t been introduced to Dave’s wife Roma yet. She was in another room and while Rich Stuelke and Mark Kalpakoff were shooting their images, I went into the other room and introduced myself to Roma. I asked her to come in and join Dave in the office so we could get some pictures of the two of them. She stood behind Dave with both hands on this shoulders and said, “I want to tell you a story about this man! We were dating and I’m on the back of his motorcycle somewhere near Bakersfield and we hit a slippery patch—might have been oil, I’m not sure. The bike went sideways and he pushesd me off.” Note: We all are going, Wow that’s not good! She goes on, “Well, he crashes and I’ve fallen in a ditch and I’m okay. I hear him calling for me. ‘Roma, where are you?’ I didn’t answer right away, I made him wait and worry!” We all just busted a gut! I don’t think even grandson Casey had heard that one before. Roma worked at the Bank of America when she was young, but quit when the bank manager said she couldn’t ride on the back of Dave’s motorcycle.

Roma wasn’t done. She goes on, “He liked to pick me up on his motorcycle at the Bank of America in Bishop were I worked. I always wore a dress at the bank, and he was picking me up at the bank when I got off work. I didn’t have any problem with just lifting the dress up and climbing on the back of the bike. So, when I came to work the next day and the bank manager called me into his office. He said, ‘Roma, it doesn’t look good for our customers seeing you being picked up at the bank by that guy on a motorcycle, please stop that!’ So I told him, ‘I quit!’” She then wraps her arms around her husband, nuzzles up against his face, and tells us all, “I just love this man!” So, this the story of how I met the man who founded Mammoth Mountain, turned it into a world class ski resort and raced motocross his whole life—and 50-years-ago started one of the sport’s iconic races. If you aren’t racing at the 2015 World Vet Championship at Glen Helen on November 7-8, you will miss the Edison Dye Lifetime Motocross Achievement Award ceremony in the Glen Helen Museum on Sunday at noon, but you can see the video on Motocross Action’s website on the day of the event and on YouTube. Enjoy.