The 2018 MXGP of France concluded at the beautiful Saint Jean d’Angely circuit where Red Bull KTM Factory Racing’s Jorge Prado stole the show and the overall win. The whole weekend from Saturday morning until the final podium on Sunday, French fans filled the hillsides and watched the best riders of the FIM Motocross World Championship. An overnight storm naturally watered the track for today and even if it was soft in the morning it later developed into prime conditions. The occasional air horns and gas powered noise makers were drowned out by even louder cheers from the thousands of spectators. American Thomas Covington looked spectacular on both Saturday and Sunday. Thomas won the first moto Sunday and finished third in the second for 2nd overall. 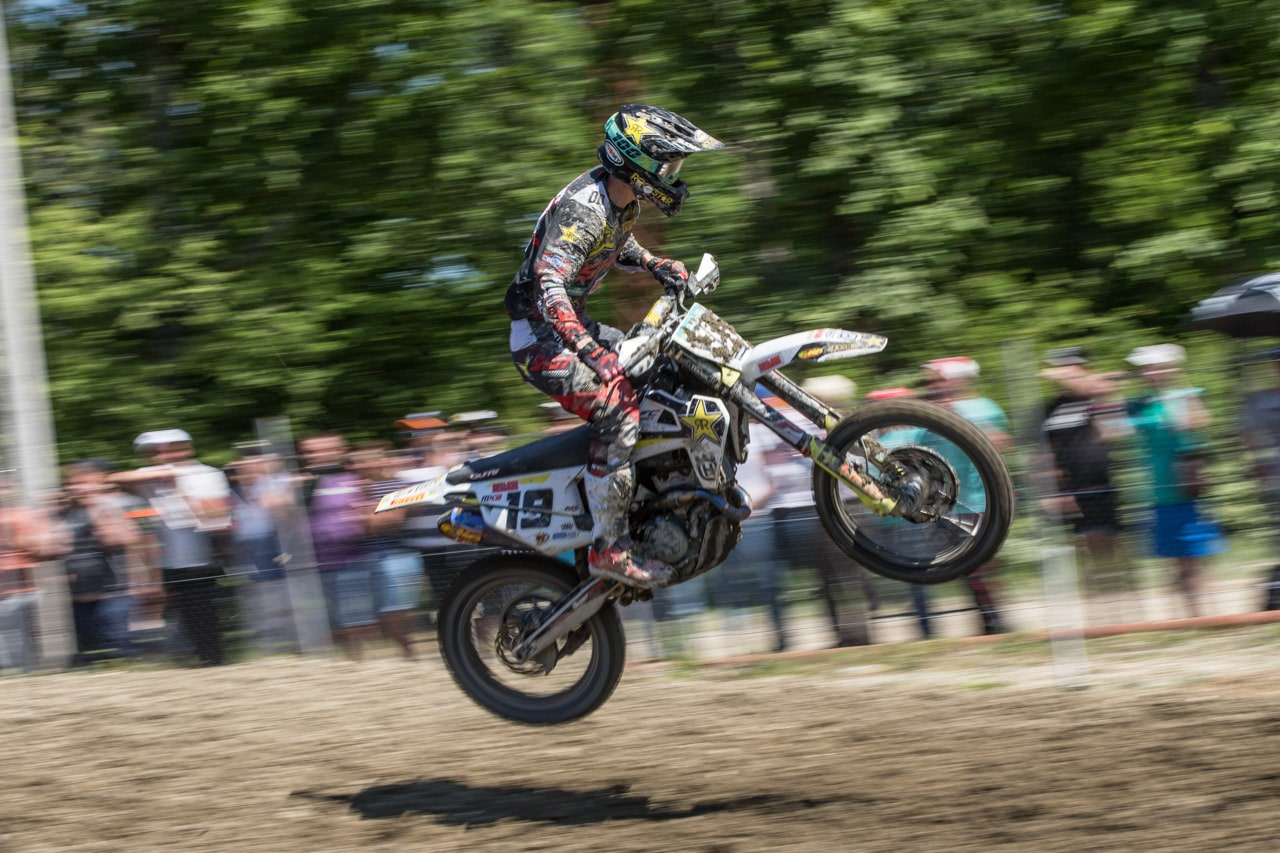 Several positions were shifted in the opening lap with Prado falling as and Jacobi losing spots to Rockstar Energy Husqvarna Factory Racing’s Thomas Kjer Olsen and Jonass. Prado’s crash dropped him to eighth but he rebounded quickly gaining 3 positions on lap 2.

Jonass meanwhile was battling with Jacobi for 3rd and the pressure of Prado closing pushed him back around the German. Prado then made a pass on Jacobi 2 laps later. Prado then had his sights set on Jonass and after chasing his teammate for laps took an outside line which then turned to the inside allowing him to push past.

Next to challenge Jacobi was Kemea Yamaha Official MX2 team’s Jago Geerts and Honda 114 Motorsport’s Hunter Lawrence. Lawrence went down on the start and was charging back to the front from 17th. Geerts passed Jacobi on lap 11 and 2 laps after Jacobi fell which helped Lawrence into 6th.

For the start of Race 2 Jonass returned to the front of the field but only until he fell on the first half of the opening lap. Jonass completed the first official lap in 17th while Prado pulled away from Geerts in the lead.

Yamaha SM Action – M.C. Migliori’s newly signed rider, Michele Cervellin, was 3rd the first laps before Olsen jumped past on a charge where he gained 3 positions in one lap. Cervellin also lost a spot to Covington and Team HRC’s Calvin Vlaanderen.

Pauls Jonass was on a mission to salvage points and did so climbing up the standings from 17th to 6th with his pass on Cervellin during lap 13. Kemea Yamaha Official MX2 Team’s Ben Watson was also fighting his way through the field and finished 7th.

When the checkered flag came out Prado took the win over Geerts and Covington who found his way past Olsen. On the overall podium Prado and Covington tied in points but the victory went to the Spaniard with his better performance in race 2. Olsen rounded out the podium making it the first time the Rockstar Energy Husqvarna Factory Racing team had both riders in the top 3.

Jorge Prado: “I was really happy with the riding, I didn’t expect to ride so well in these conditions. The second race was just perfect, it is a shame the Pauls crashed in the first lap, but it was good for me after I took the lead and got the win.”

Thomas Covington: “Overall it was a really good weekend for me, I have been struggling the first half of the season so it is good to get some consistent races in a weekend. I felt really strong, especially at the end, I really found my rhythm.”

Thomas Kjer Olsen: “It was a really good weekend for the team, I am happy for the team and for myself. I am really happy that I was able to pull off a 2-4 this weekend. I was able to be aggressive in the first few laps and I’m happy to be on the podium.”

Pauls Jonass: “It is not the best result, I lost some points in the championship but it is a long season so I’m not worried about that and I’m already looking forward to next weekend.” Thomas Covington got the MX2 qualifying race win in France.

The 10th round of the 2018 MXGP series is held in Saint Jean d’Angély, France. On Saturday, the MX2 qualifying race was won by the American, Thomas Covington. Thomas hasn’t got the results he had wished for so far this season. He hasn’t been the same since he tore his ACL at the 2017 MXdN in Matterly Basin riding for team USA. The KTM duo of Pauls Jonass and Jorge Prado who have took change of the MX2 series, thus far, finished second and third. Will this be the round that Thomas Covington breaks new ground and puts the KTM riders at bay? Breaking up the KTM party at the front of the field today was Rockstar Energy Husqvarna Factory Racing’s Thomas Covington. Covington, who had a strong start to the race in 3rd, by the end of lap 1 was into second past the fast starter of Henry Jacobi on his STC Racing Husqvarna.

Leading on from the end of the first lap was Red Bull KTM Factory Racing’s Jorge Prado. Prado, now known for his strong starting ability, was just alongside Jacobi in the first turn but Jacobi’s line uphill prevailed at first. The number one of Pauls Jonass finished less than two seconds behind Covington.

Among the most notable action on the start was the 3 rider crash involving Rockstar Energy Husqvarna Factory Racing’s Thomas Kjer Olsen, Kemea Yamaha Official MX2’s Ben Watson, and LRT KTM’s Davy Pootjes. All three took a minute to go again but each rejoined the racing and came through the pack. Olsen recovered to 13th, Watson to 12th, and Pootjes to 20th after another scare on lap 10 cost him a handful of positions.

Back at the front Red Bull KTM Factory Racing’s Pauls Jonass was giving chase to Covington who in turn was looking for a way around Prado. On lap 7, just before coming down the middle section of the track, Covington took the lead from Prado and by the bottom of the hill Jonass was around his teammate also. The remaining 6 laps Jonass chased Covington and even made some stabs at the leader but none were successful. Across the finish line it was Covington from Jonass, Prado, Jacobi, and Hitachi KTM UK’s Conrad Mewse who made a last lap turn pass on Team Diga Procross’ Iker Larranaga for 5th.

Thomas Covington: “I just really have to focus on my start tomorrow like Jeffrey said and we worked really hard this week to try and improve the bike off the gate, we have just really been working on starts this week and I think it is going to show”.