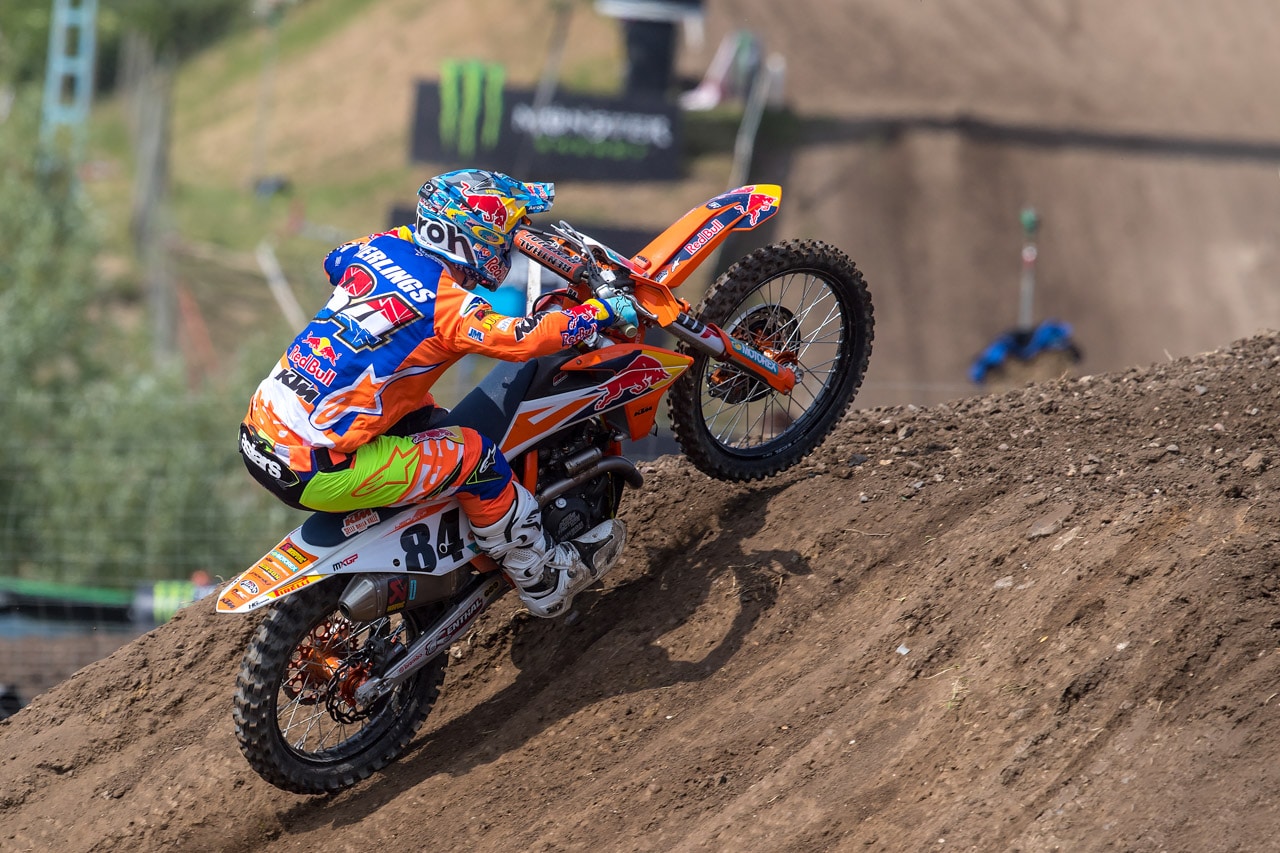 No one can touch Jeffrey Herlings.

The 8th round of the 2018 MXGP World Championship here in Teutschenthal, Germany has concluded. Again, it was KTM Factory rider, Jeffrey Herlings who dominated the field. His teammate Tony Cairoli, however, had a bad day finishing outside the top five losing valuable points. Honda’s Tim Gajser had his best race of the year going 2-2 for second overall.

MXGP WORLD CHAMPIONSHIP CLASSIFICATION (ROUND 8 OF 20) Jeffrey Herlings dominated here in the qualifying race in Germany.

The 2018 MXGP season continues this weekend here in Teutschenthal, Germany for the 8th round of the series. Points leader, Jeffrey Herlings continued his win streak beating out Gautier Palin and Tim Gajser. KTM’s Tony Cairoli had the second fastest lap time behind Herlings but had some trouble. Factory Honda’s Tim Gajser got on the podium here in Germany. The start of the MXGP qualifying race.

Red Bull KTM Factory Racing’s Jeffrey Herlings has been impressive to say the least this season and today the Dutch sensation put in another strong ride. Herlings led from the first corner after drag racing down the long Teutschenthal start and beating out Rockstar Energy Husqvarna Factory Racing’s Gautier Paulin.

A strong start also helped the #77 Gebben Van Venrooy Kawasaki of Alessandro Lupino to battle inside the top ten. Lupino and his privateer Kawasaki was running in 7th just behind Febvre on the opening laps but soon come under pressure the Monster Energy Kawasaki of Julien Lieber. Lieber made a pass just before the pair returned to the start straight and Lupino then tried to retaliate by jumping long to the inside but Lieber was unaffected by the move. Next to get by the Italian was Wilvo Yamaha Official MXGP’s Jeremy Seewer. Seewer, who won the MX2 overall here last year continued his charge forward also passing Lieber.

Back at the front of the field Cairoli was applying pressure to Paulin but then had a bike issue. The mishap forced Cairoli to stop and fix the front end of his machine before continuing. While the defending MXGP Champion was stopped, Gajser, Van Horebeek, Febvre, and Seewer all made it past. With only 3 laps remaining Cairoli was in 7th and unable to improve his position as Herlings took the race win with Paulin 2nd and Gajser 3rd.

Monster Energy Kawasaki Racing Team’s Clement Desalle, who celebrates his 29th birthday today, had to come back from last place after a crash on the first lap. Desalle managed to take his Factory Kawasaki up into 21st and will hope to rebound in tomorrow’s racing.

Jeffrey Herlings in the qualifying press conference said: “The start was fine, Paulin had a better jump but then I was on the inside so I had a few meters less and out dragged him so it was really good to start out front. The speed was good and my bike was very good so I’m looking forward to tomorrow.”

TM Racing Factory Team’s Max Nagl is hoping to come away with a season best result for his fans at his home GP but struggled in today’s Qualifying race when he scored an 18th place finish. Nagl in the press conference said: “As always it is really nice to be at your home GP and you expect something a bit special. The problem was that I was reallyfar outside on the start and I couldn’t do anything from there, you get pushed in the first corner and end up somewhere in the back of the field, then after I had a good ride and a good rhythm. Now I’m looking forward to tomorrow because we will have a bit better gate pick, a little more inside and hopefully we can make something good tomorrow, also for the fans it would be nice.” MXGP class rookie Jeremy Seewer will be one to watch here in Germany.

Cairoli not only won here last year over Herlings but 4 other times in his career while Herlings has been atop the Teutschenthal podium twice in the MX2 category. However Herlings does have the momentum so far this season with the Latvian win being the 5th victory of the 7 races so far.

Monster Energy Kawasaki Racing Team’s Clement Desalle has maintained his third place in the points standings with a 4th overall in Latvia just after his win in Russia. Desalle won the German GP at Teutschenthal in 2014, was 4th last year, and has reached the podium 3 other times.

Monster Energy Yamaha Factory MXGP’s Romain Febvre had a mixed weekend in Latvia when he battled with Cairoli for the lead in Race 1 eventually finishing 3rd but then crashed out of Race 2. Febvre, despite his injured right-arm will try to race this weekend and salvage points, the Frenchman did win the GP in 2015 and finished in the top 5 on 3 other occasions.

5th in the Championship at this point of the season is Rockstar Energy Husqvarna Factory Racing’s Gautier Paulin. Paulin just scored his second podium of the year last weekend in Latvia and was also on the podium here last year. Paulin has never won the German GP but has come in 2nd twice, in both 2015 and 2011.

Wilvo Yamaha Official MXGP’s Jeremy Seewer is one rider to watch seeing the MXGP rookie topped the MX2 class here in 2017. Also not to forget is Team HRC’s Tim Gajser, who crashed out here in spectacular fashion in 2017 while battling for the win, and TM Factory Racing’s Max Nagl as it will be his home GP