The Best in Pits gallery is from Raymond James Stadium in Tampa Bay, Florida. It was round 8 of the Monster Energy Supercross Series.  Above is a little detail on Dylan Ferrandis’s Kite hubs. Dylan finished second in the 250 East in Tampa. Colt Nichols hoped to follow up his second place finish from the Arlington SX last weekend aboard his Monster Energy STAR Racing Yamaha YZ250F, but he ended up 9th in Tampa. Progress has been creeping up in Cooper Webb’s program recently. Tampa’s 4th was his best result of 2018—and he got to lead for awhile. Its all about the little details. Above is the helmet of last week’s first turn victim Martin Davalos. Although he was a bit banged up, Davalos finished 5th in Tampa —aided by a last lap crash by Jordon Smith. Tyler Bowers was the most deserving Kawasaki privateer and got called up to fill in for Josh Grant, after Grant broke his leg last week in practice. Bowers first race on the factory KX450F was a 14th. 2017 Supercross 250 East champ Zach Osborne looked like he was going to win in Tampa, but he got zapped by the speed of Austin Forkner and Dylan Ferrandis. He still gets to keep his red plate for next week as he held on to a 5-point lead in the title chase over Forkner. Weston Peick finally had a bad race. His 12th came after crashing in Tampa’s white beach sand. Up to this point, Weston has been solidly in the top ten each week—and often in the top five. JGR definitely knows how to take care of an engine. The Suzuki boys have been really putting in the work to get the RM-Z250 competitive. This is Jimmy Decotis’ bike. Jimmy was 10th in Tampa. 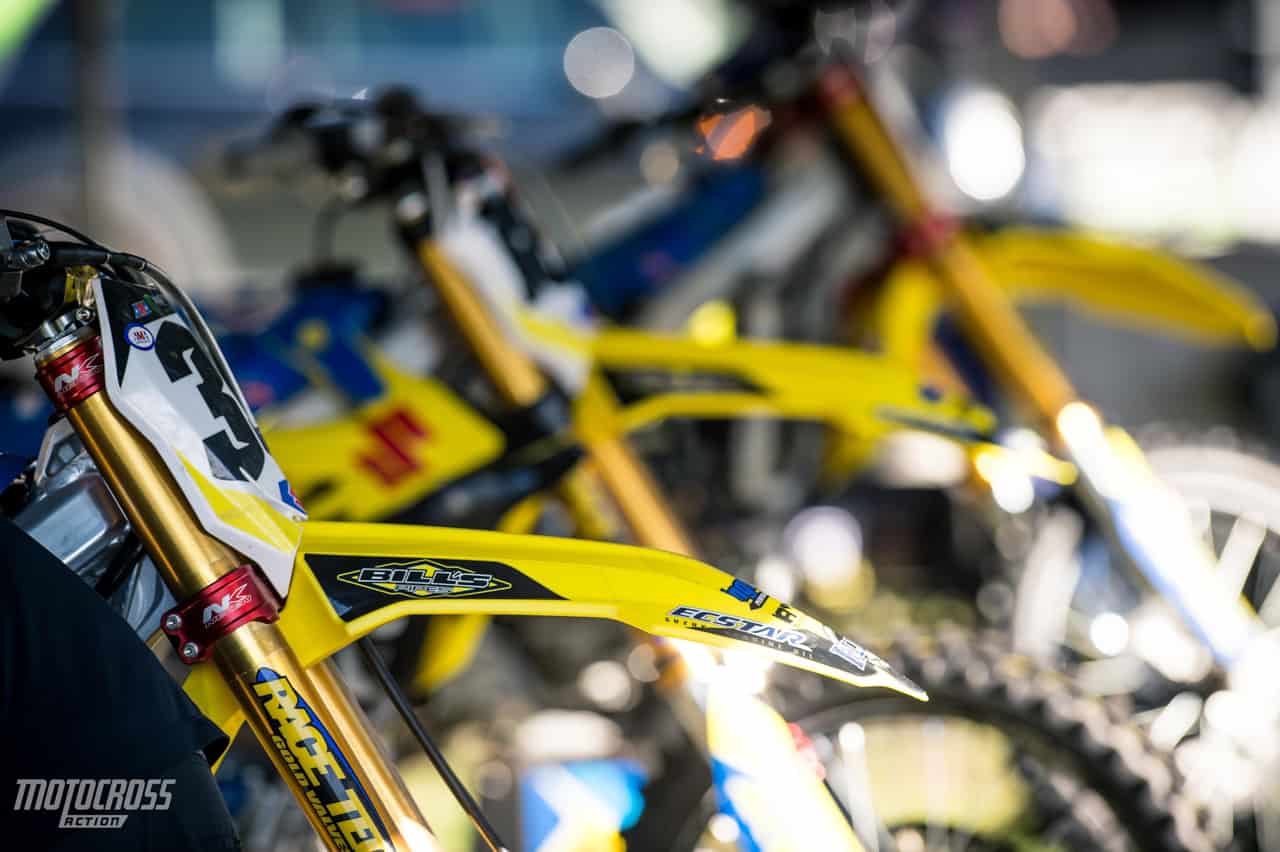 Marvin Musquin’s KTM 450SXF Factory Edition could easily have won the Tampa Supercross if Marvin had been better in the whoops. That has been his Achilles Tendon this year and it cost him a win in Tampa. Jason Anderson’s Rockstar Edition Husky FC450 gets it’s finishing touches before the action starts. Anderson’s 3rd was exactly what the points leader needs to do. If you can’t win it, then put it on the podium. Blake Baggett and his KTM 450SXF are gaining steam as the series progress (helped by the injuries to  Justin Barcia, Ken Roczen and now Cole Seely). 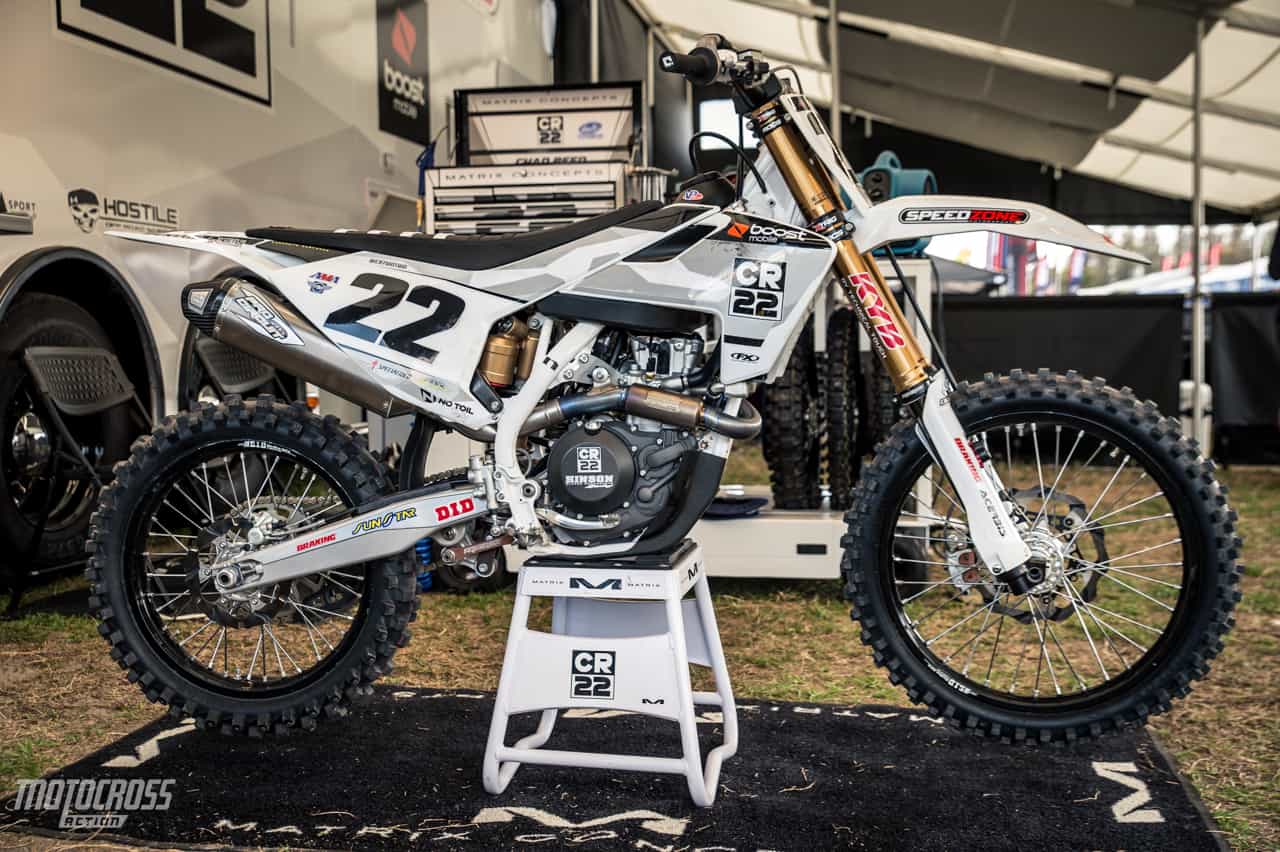 Chad Reed broke Mike LaRocco’s long standing record for the rider to race in the most Supercross main events (at 228). Unfortunately, Chad had electrical issues with his Boost Mobile Australia FC450 and pulled out of the Main to finish 21st (when he looked like he would finish in the top ten). Dylan Ferrandis’ Yamaha YZ250F is fast and when you put the Frenchman on it it is incredibly fast. Yes, a little wild at times, but it worked for him in Tampa. Dylan said that Tampa was really his first race in the 250 East series since he was taken out in last week’s first turn crash. Even though Ken Roczen is not racing, his bike is still under the Factory Honda tent. Starting next week, there will be no riders on the red machines because Cole Seely suffered a hip injury and could be out for a long time. Normally Honda would call up Fredrik Noren to fill-in, but Noren is having ACL surgery. Eli Tomac has no pressure. Eli’s chances of winning the 2018 title depends on bad luck hitting the riders ahead of him in points—which has already happened to Roczen, Barcia and Seely. Until then, Tomac just has to keep winning. 65 points is a big hole to dig out of, but it can be done.