The second round of the 250 East class of the 2019 Monster Energy Supercross series is held in the big state of Texas inside AT&T stadium. Austin Forkner was the dominate force at the first east round in Minneapolis, Minnesota. The question is, how will Austin handle the pressure of having a target on his back as being the guy to beat. Riders like Justin Cooper and Jordon Smith are not going to let Forkner run away with it. Tonight in Arlington is going to be some interesting racing in the 250 class.

Michell Oldenburg wins heat number one with Justin Cooper and Alex Martin in close proximity. In heat 2 it was Jordon Smith that got the holeshot but Austin Forkner was a close second. On the fifth lap Forkner made the pass on Smith for the win. Pro Circuit Kawasaki rider and 250 class veteran Martin Davalos rounded off the podium with Blake Wharton for forth. 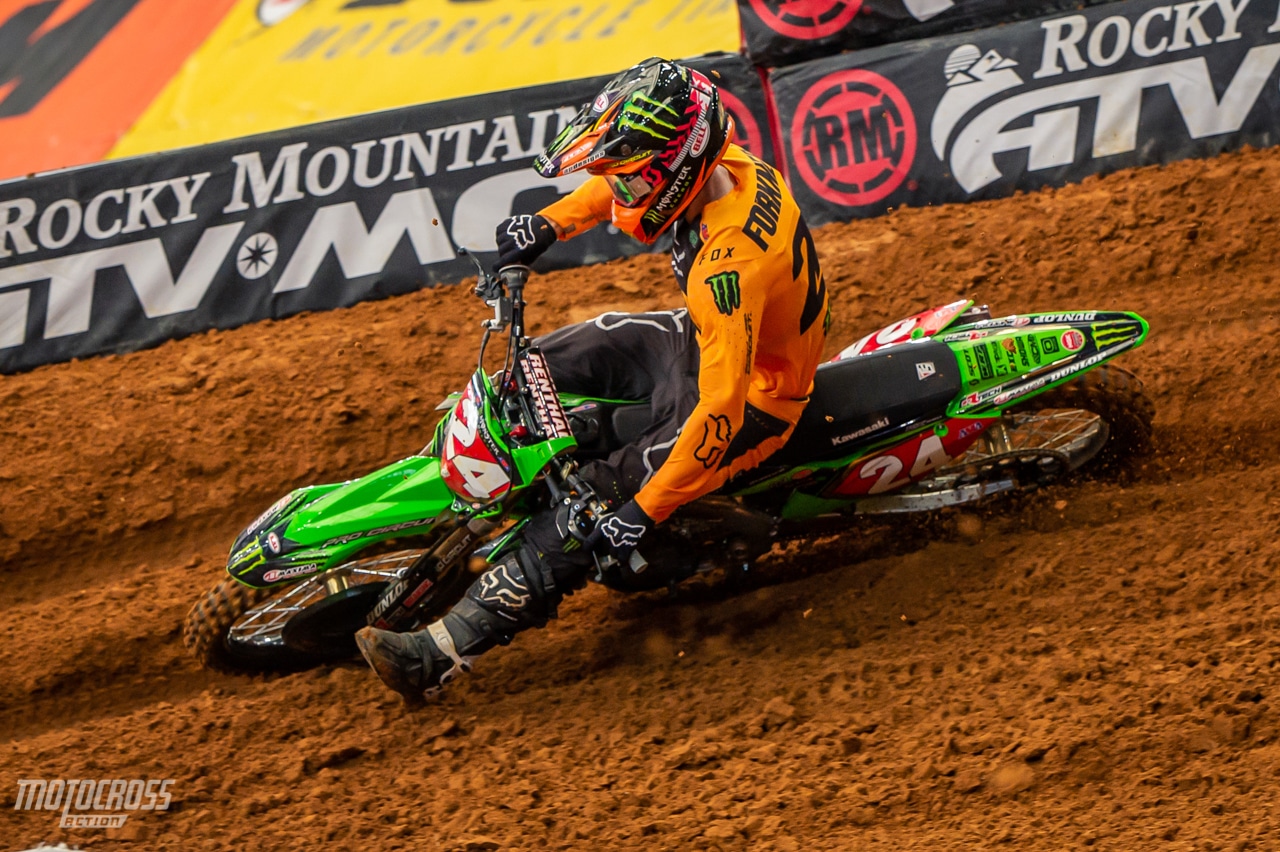 Austin Forkner wins his second race in a row.

Austin Forkner again led the first lap with the JGR Suzuki rider of Kyle Peters second and Chase Sexton third. Peters fell back to fifth on the fourth lap with Sexton and Jordan Smith two and three.  Alex Martin got a bad start and was in 13th on lap four. Sexton logged the fastest lap of the main on lap five to start closing the gap on Forker to the two second mark. Martin Davalos was in fifth on the seventh lap behind Cooper. Half way through the 250 main Smith started chopping the gap down on Sexton and Forkner. On lap ten Peters was back in seventh and Wharton in eighth. Sexton made a big mistake and Smith and Copper made their way by him on lap 13. On lap 14 Alex Martin hadn’t  make up much ground and sat in 9th.  On lap 16 Smith made a big mistake that put him back to fifth moving up Cooper in second, Sexton in third and Davalos in forth, but Smith made his way past Davalos the next lap. Forker won his second straight main event in the 250 East Coast series with Justin Cooper in second and Sexton rounding out the podium. Alex Martin made it to 8th and Blake Wharton didn’t finish the race. Austin Forkner has an eight point lead after the second round. Kyle Cunningham goes on to win the 250 LCQ.

Tj Albright came around the first lap of the 250 LCQ in the lead with Steven Clarke and factory Husky rider Thomas Covington in third. Kyle Cunningham came around on the first lap in seventh. On the third lap Clarke took the lead and Cunningham moved up to third hot on the tail of Albright with Ramyller Alves moving into the final qualifying position. Cunningham moved up to second on the forth lap and made the pass for the lead on the fifth lap. Something happed to Covington moving him back to 8th. Cunningham took the win with Alves in second, Clarke in third and Albright in the final transfer position. Henry Miller was fifth and Covington seventh.

Austin Forkner made the pass on Jordan Smith for the win. Mitchell Oldenburg gets his first heat race win of the year on his Star Racing Yamaha YZ250F.

250 EAST HIGHLIGHTS: WATCH THE 2019 ARLINGTON SUPERCROSS IN UNDER 1 MINUTE, 30 SECONDS