Austin Forkner goes 1-1-1 at the Detroit Triple Crown and continues his win streak!

The 2019 Detroit Supercross is in the books for the 250 class and Austin Forkner has continued his win streak in 2019! Jordon Smith fought through the night with an injury in his wrist to finish second place and Chase Sexton went 4-4-2 to round out the podium in third. Austin has stretched out his points lead to now thirteen ahead of Jordon Smith. Next weekend the 250 East will meet the West in Atlanta for the first East/West shootout of the 2019 season. It will be interesting to see the two Monster Energy Pro Circuit Kawasaki riders, Adam Cianciarulo and Austin Forkner battle for the points and the bragging rights. Austin Forkner finishes off the night strong with another win in the third 250 Main Event. Jordon Smith finished second in Detroit and he now sits second in the Championship point standings, thirteen points behind Forkner. Chase Sexton rode well in Detroit and he finished third.

250 CHAMPIONSHIP POINT STANDINGS (AFTER ROUND 3 OF 9) Austin Forkner is all smiles in 2019. He will keep the red plate going into next weekend’s East/West shootout in Atlanta.

Round eight of the 2019 Monster Energy Supercross season is in Detroit, Michigan. This is the third round of the 250 East division and so far Austin Forkner is undefeated. Jordon Smith grabbed the holeshot in 250 Main Event #2 but Forkner quickly made the pass on the first lap and checked out to take the win in the second 250 Main Event of the night. Jordon Smith held on for another second place with Alex Martin finishing third. 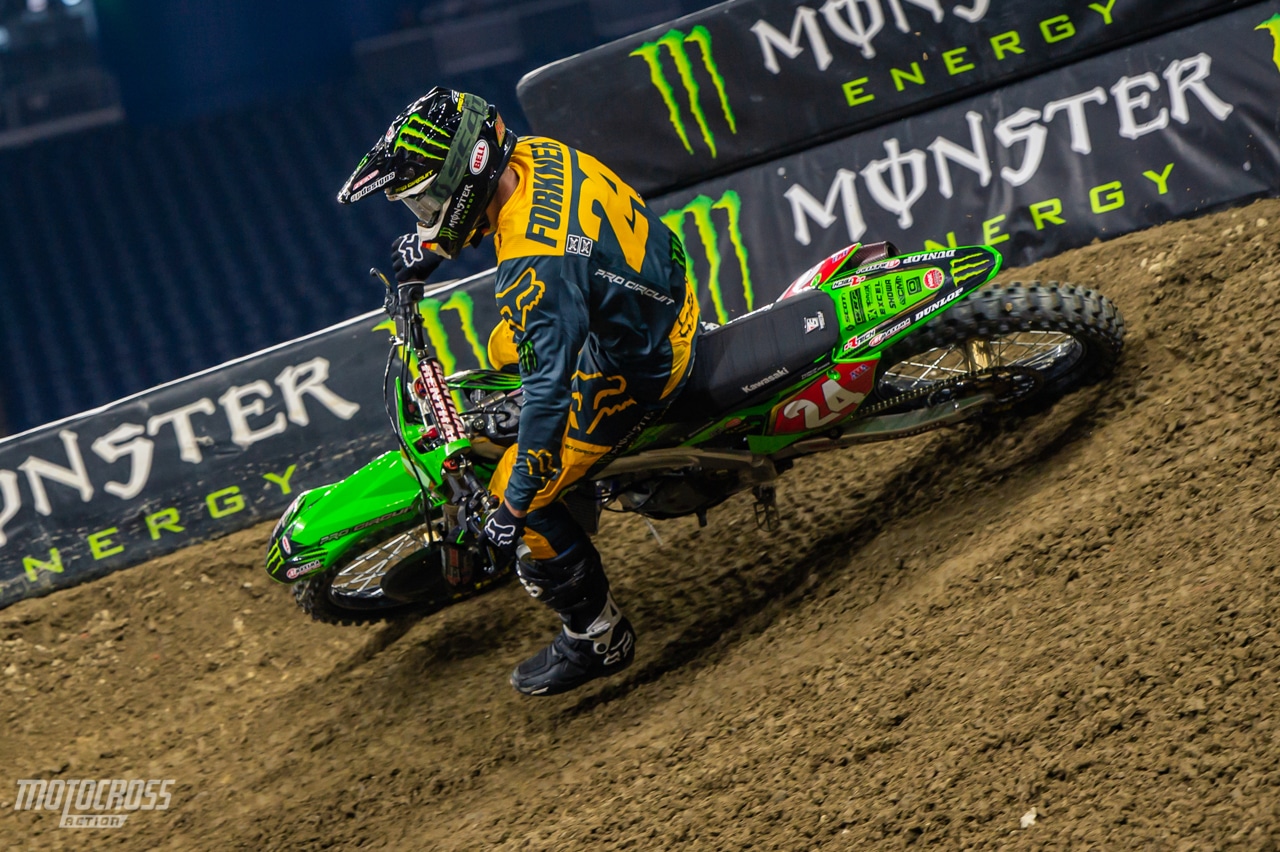 Austin Forkner has been untouchable so far. Jordon Smith has gone 2-2 so far tonight. One more main event to go.

Round eight of the 2019 Monster Energy Supercross season is underway and it was Austin Forkner who grabbed the first win of the night. Jordon Smith and Chase Sexton battled back and forth throughout the short 10-minute plus one lap race and it was Jordon Smith who held on for second while Chase Sexton made a mistake in the whoops, just one turn before the finish line. Sexton got a little sideways and went off the track. He went around the berm and got back on as quickly as possible, but he still wasn’t able to hold off Justin Cooper.

Austin Forkner got out front early and pulled away from the competition to win the first Main Event of the night. After Sexton made a mistake, Justin Cooper was able to grab third place in the final corner of the race.

BEST IN THE PITS | 2019 DETROIT SUPERCROSS