Team Netherlands went into the 73rd Monster Energy Motocross of Nations as heavy favourites and came out with their first ever victory in history as riders Glenn Coldenhoff, Jeffrey Herlings and Calvin Vlaanderen dominated the rest of the World.

Joining Team Netherlands for this special occasion was not only thousands of Dutch fans but also the King of the Netherlands. His Majesty King of The Netherlands Willem-Alexander took the opportunity to meet Youthstream President Mr Giuseppe Luongo, Youthstream CEO David Luongo, FIM Vice President Jacques Bolle and Organizer of the 2019 Monster Energy FIM MXoN Lee van Dam as well as take a picture with the Dutch team to mark this historic occasion.

Despite a rainstorm that lashed the white sand of Assen, thousands were in attendance with the stands of the TT-circuit filled with loud cheers and colours of the national flags. The atmosphere was incredible as 20 nations battled it out for pride and glory for their home country as well as the highly sought after Chamberlain trophy.

Team Netherlands’ Coldenhoff with a 1-1 score for the second year running, Herlings with 2-4 and Vlaanderen with 10-10 that saw them cruise to their win with 18 points (taking out the worst score of 10th).

Second overall was Team Belgium as Jeremy Van Horebeek, Kevin Strijbos and Jago Geerts were consistent enough for yet another podium with 47 points, and third overall was Team Great Britain with Shaun Simpson, Nathan Watson and Adam Sterry on 58 points.

Overall class winners were Team Slovenian’s Tim Gajser in the MXGP class with 1-2, Team Denmark’s Thomas Kjer Olsen in the MX2 class with 8-8 and Team Netherlands’ Glenn Coldenhoff in the Open class with his 1-1. 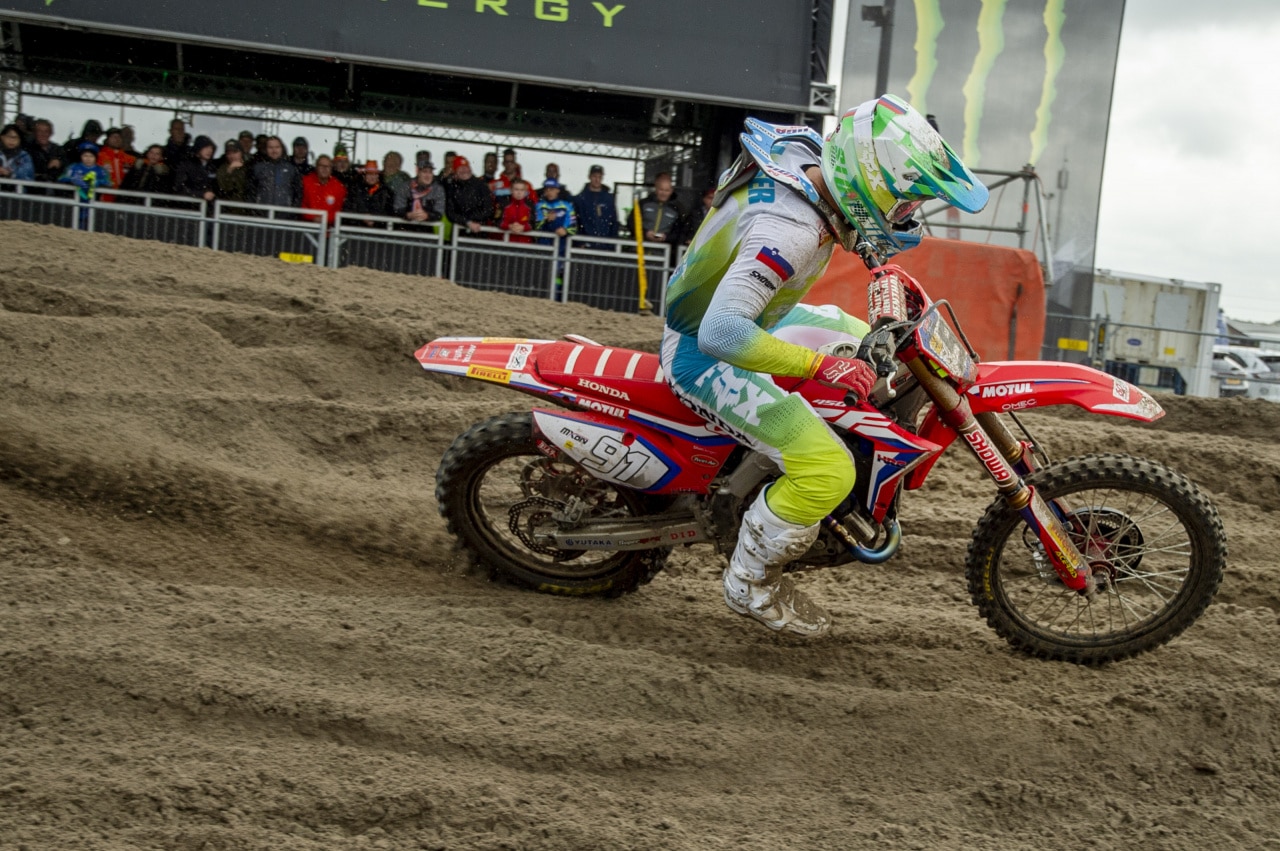 Webster’s bike got stuck in the mud and dropped well back in the field to 16th place as Cooper was still riding, but dead last.

Ferris went down and dropped to ninth place while after eight laps it was Prado leading with more than three seconds over Gajser. At lap 10 Gajser passed Prado for the lead while Seewer was third, followed by Van Horebeek in fourth and Monticelli in fifth. Herlings moved into fifth place and then passed Van Horebeek to move into fourth closing up on the leaders.

Herlings was on fire, two seconds a lap quicker than the leaders. After 14 laps it was Gasjer with six seconds over Herlings, then came Seewer, Van Horebeek, Paulin, Prado, Monticelli, Olsen, Fredriksen, and Vlaanderen into the top ten. Anderson was up to 14th place and Ferris 17th.

Herlings was right up on Gajser with two laps to go, as he moves into take the lead. As Geerts found himself in 20th place and then out of the race with a broken bike, Belgium suddenly dropped from second to fifth in the standings. Anderson moved up to 13thas Gajser took the win from Herlings and Seewer. The Netherlands going 2-10 for a big lead with Switzerland on 23 points and third were France also with 23 points. Glenn Coldenhoff of the Dutch team won the second MXoN moto after Gajser went down while in the lead and got past Van Horebeek.

Gajser rode really well in front with more than a two-second lead over Van Horebeek while Herlings was on the move as he passed Prado and Paulin. Gajser crashed and Van Horebeek took the lead and Coldenhoff was into second place.

Coldenhoff took the lead and the Dutch were on their way to the top of the podium. Herlings moved into 10thplace as the top ten was Coldenhoff, Van Horebeek, Gajser, Jonass, Seewer, Watson, Anderson, Simpson, Monticelli, and Herlings. Herlings then made the move into ninth as he passed Simpson and Anderson passed Watson for sixth position.

After six laps it was Coldenhoff with a six second lead over Van Horebeek, with Gajser third. Herlings crashed and dropped back to 11thplace. While Herlings moved back into the top 10 in ninth position, his team-mate Coldenhoff continued to lead over Gajser and Van Horebeek. Prado was up to eight place just behind Anderson and Watson.

Jonass moved past Van Horebeek for third place while Osborne continued to struggle in 16thposition. Gajser started closing up on Coldenhoff for the lead, and Herlings moved into seventh place, with Prado eight, Watson ninth and Paulin 10th.

Coldenhoff continued to control the race up front, leading by four seconds with Gajser second and Jonass third. Herlings moved into sixth place, dropping Anderson to seventh and Prado was also closing up on the American. Paulin dropped out of the race with machine problems and put Team Great Britain on the podium for the third year in a row. Coldenhoff won the race for The Netherlands ahead of Gajser and Jonass ensuring the first ever victory of Team Netherlands in history. Just like last year at the MXoN in Red Bud, Glenn Coldenhoff went on to won both of his motos for the Dutch team brining them to victory.

Jonass moved into third place and Vlaanderen did fly into eight place as he closed up on Osborne. Olsen also was on the move as he passed Vlaanderen and then passed Osborne. After four laps it was Coldenhoff with a 10 second lead, then Jonass, Simpson, Kullas and Ullrich.

Coldenhoff continued to lead with more than five seconds over Jonass, then Simpson with a further 33 seconds back while Kullas was still fifth. Then came Osborne, Ullrich, Tixier, Olsen, Geerts and Vlaanderen. Coldenhoff won the second heat from Jonass and Simpson. For the first time in history, the Dutch won the MXoN.