For the 6th round of the 2020 AMA Nationals, riders headed to Millville, Minnesota for the Spring Creek Pro Motocross National. Racers were blessed with beautiful weather and racing conditions in the cool Fall air and it was that time of the year for some exciting racing. Coming off a hot streak from qualifying, the Martin brothers dominated the clock and put down the fastest laps in the 250 class. It is no surprise that the two had a few tricks up their sleeves for unlocking their incredible speed, after all, it is their homegrown track. However, that is to say, that the competition was not playing around either. The top 6 riders were all within the same second of each other and to put it closer, first and second place was .01 second within each other. Star Yamaha riders Justin Cooper and Dylan Ferrandis followed Alex Martin closely and Jeremy Martin in the fourth position. Dylan Ferrandis won the second moto and took the overall

It’s no surprise that the Star Racing Yamahas took the second moto holeshot as Shane McElrath snagged the holeshot followed by his teammates Justin Cooper and Dylan Ferrandis. Alex Martin and his brother Jeremy Martin sat in fourth and fifth similar to the first moto. Within the second lap Jeremy Martin passed his brother for the fourth place position and it was a fight for third place for Jeremy Martin in order to keep the red plate. Then it was Alex’s turn to feel the heat behind him as Cameron McAdoo and Hunter Lawrence caught up to him.

Jeremy Martin gained some speed as well as he set his eyes on the Frenchman in front of him. Unfortunately for Ferrandis his teammates were the ones in front of him and he started matching their pace and didn’t want to take them out ,which gave Jeremy the perfect opportunity to catch up to him. The leader Shane McElrath went down in a turn and lost 4 positions but thankfully got up fairly quickly. Justin Cooper took the lead and the heat was on as there was a three-way battle for first place featuring the top two points leaders and a whole lot of pressure on his shoulders. Dylan Ferrandis made a clean pass on Justin Cooper but Cooper wasn’t done with the race yet. Unfortunately, Justin Cooper lost some speed through the large sand rollers giving Jeremy Martin the opportunity to make a pass. Jeremy Martin realized that he didn’t want to let Ferrandis have the chance to push away like the first moto, so he started closing the gap. For the rest of the pack, not many passes occurred, with Alex Martin in fourth place and Shane McElrath holding onto fifth place. Hunter Lawrence rode in the sixth position with second-place finisher in the first moto R.J. Hampshire in the seventh position. 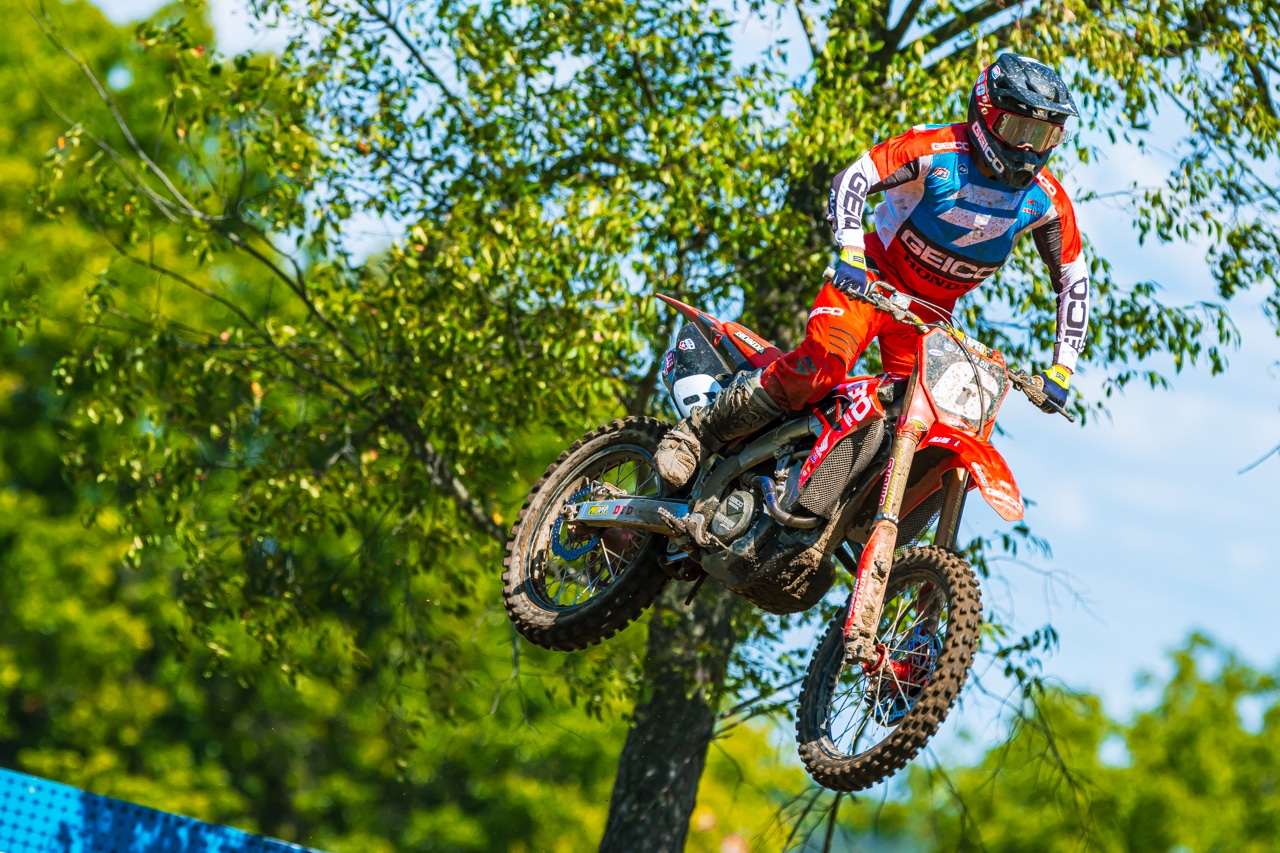 Dylan and Jeremy Martin had a second betweenthem but more than 9 seconds between second and third place. Each time Dylan got comfortable with his current position, Jeremy would push harder and make up a few bike lengths. For one half of the track Dylan was faster, but the other half Jeremy would make up considerably more time. With two laps left we saw an exciting battle between Shane McElrath and Jett Lawrence for seventh place. By the time the last lap came around Dylan Ferrandis and Jeremy Martin set a staggering 25-plus second gap on Justin Cooper. Jeremy Martin threw down his fastest lap of the whole race at the second to last lap  when Ferrandis made a mistake and you could hear the roar of the fans. The two riders went side-by-side as they drag raced to the finish line and Jeremy just could not catch up to the fast rider from France. Dylan Ferrandis took first place and the overall with a 1-1 to Martin second overall with a 5-2.