The 2020 Loretta Lynn National 2 turned out to be another extremely exciting day of racing for the 2020 Pro Motocross season. The weather and track provided the ultimate challenge for man and machine as riders and bikes were failing all throughout the day. Zach Osborne had the weight of the world on his shoulders coming into round two with the red plate and his bike didn’t even start in time to make the first and only Group A Qualifying session. Luckily, the Rockstar Husqvarna team got it running for the Group B practice and he was able to make it in that way. Osborne was able to recover from his stressful situation, however, Eli Tomac experienced issues that were out of his control. Click the ‘full coverage’ link below to read the race report from both the 250 and 450 classes to learn about Tomac’s issues and all of the other main topics from the day. Also, scroll down for the updated AMA Pro Motocross point standings after round two.

450 NATIONAL MOTOCROSS POINTS STANDING (ROUND 2 OF 9) Amazingly, Zach Osborne won his second 450 National in a row and extended his point lead over the rest of the field.

In the 450 class, Zach Osborne was able to come through the pack to finish 5th in the first moto and then come through the pack again to win moto 2 at the second round of the 2020 Pro Motocross season. The race win didn’t fall into Osborne’s lap through, he fought his way around Anderson, Musquin and Max Anstie to take the lead in the late stages of the race and he had to hold off a hard charging Marvin Musquin who was close at the finish line. Justin Barcia won the first moto and beat Broc Tickle (who finished second) by over a minute. Unfortunately, Justin Barcia had issues in the second race and eventually he DNF’d. Eli Tomac also got the short end of the stick at round two as his KX450 failed on him twice. Luckily for Eli, it stopped on the last lap of the first moto and Justin Barcia had already lapped his way to 10th place. This gave Eli an 9th in the first moto and when his bike stopped with two laps to go in the second race, he ended up 24th. Marvin Musquin rode well again at Loretta’s. He finished second in moto two, third overall on the day and he moved to second in the point standings. Justin Barcia is now third in the point standings.

250 NATIONAL MOTOCROSS POINTS STANDING (ROUND 2 OF 9) 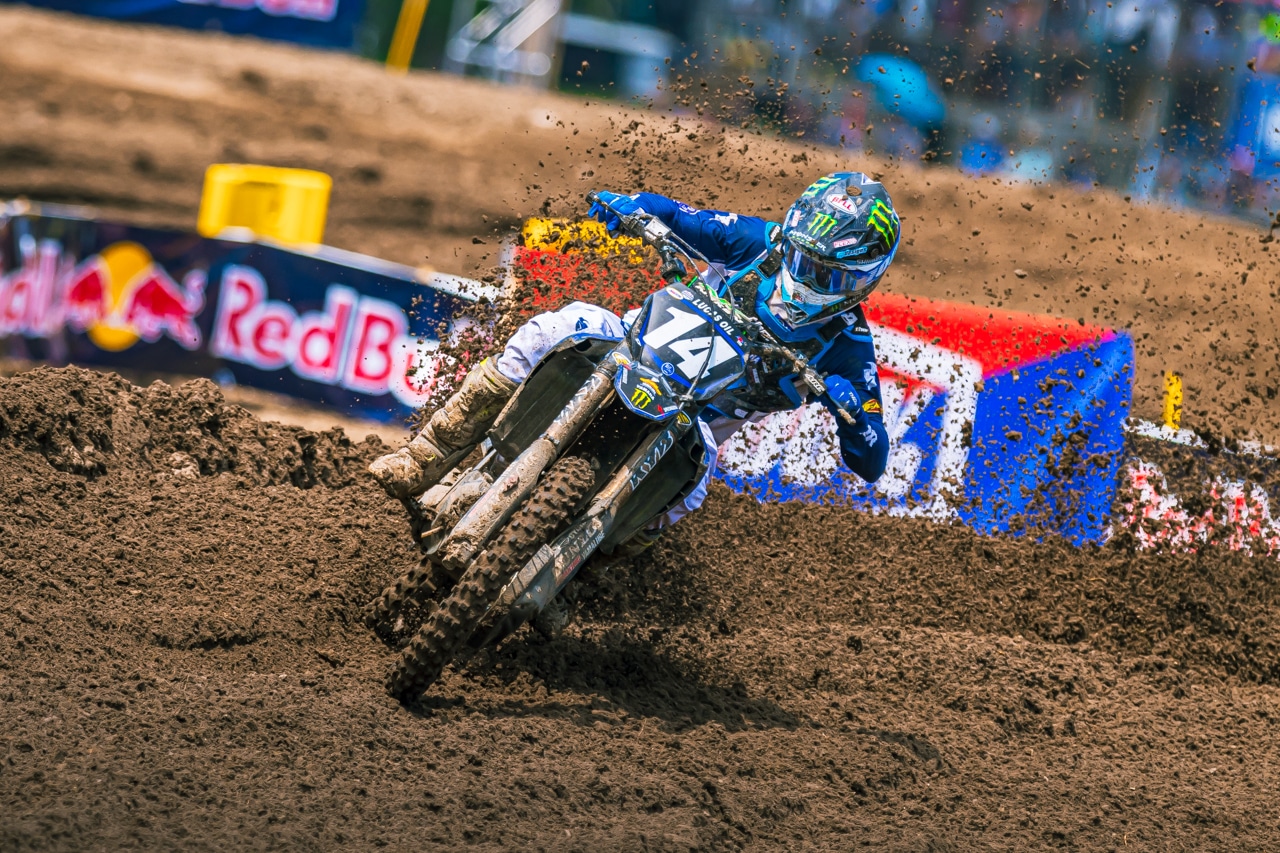 Dylan Ferrandis holds the 250 class points lead after round two.

The two front runners in the 250 class this summer are Dylan Ferrandis and Jeremy Martin. Ferrandis was dominant at the first round when he earned 1-1 moto scores. Round two wasn’t as easy for the Frenchman as he and the rest of the pack battled through the extremely muddy conditions to salvage his points lead. Jeremy Martin finished third overall at the season opener, but his consistent 3-2 moto scores at the 2020 Loretta Lynn National #2 earned him the overall win on the day and second in the 250 class point standings. Rj Hampshire came into round two hot off his second place finish the weekend prior. He carried that momentum into the first race where he won. Unfortunately for Hampshire, a bike malfunction ended his second moto early giving him an 1-18 score on the day. Jeremy Martin won the overall at round two and moved to second in the points. SEE THE LO”WET”TA LYNN NATIONAL, THE KAWLAMITY & STEAM CLEANING IN UNDER SIX MINUTES