Adam Cianciarulo got a lot of points after going 1-1 in Spring Creek.

The 2020 Spring Creek Pro National is under wraps and some absolutely awesome racing took place. Both the 250 and 450 class provided some edge of the seat racing, drama, and plenty of mechanical issues. Coming into the sixth round, points leaders Zach Osborne and Jeremy Martin were going to be tossed a few wrenches to dodge during the day. Jeremy Martin battling with Dylan Ferrandis and Zach Osborne suffering a devastating flat front, it was anyone’s game to earn some points chasing the championship. Zach Osborne came into the race sitting with a comfortable points lead but with 10 minutes left in the race, noticed something was wrong. After finding out it was a front flat tire and refusing to pit so that the mechanics could change it, it was a race against dropping to 20th place to maintain his points lead. Adam Cianciarulo would end up taking the win and earned a handsome amount of points after Marvin Musquin had problems of his own. Jeremy Martin also struggled to get a podium in the first moto and in the second moto battled with Dylan Ferrandis who ended up taking the victory and the red plate with him as they head to WW Ranch for some racing down south. With the current season of racing, we already knew that this year’s 2020 Pro Motocross Championship was full of surprises and we bet that some of the racers were surprised as well. Coming into the race, Zach Osborne had a comfortable lead in the points chase but it wasn’t until getting a flat tire with 10 minutes and two laps left in the second moto that things started to get shaken up. Refusing to pit at his mechanics, Zach did not want to take the chance of losing too many positions and risking the red plate disappearing from his clutches. Fortunately, Zach is a quick learner and slowly got some of his speed back resulting in him not losing a lot of positions and the red plate. Fortunately for Adam Cianciarulo, the odds were in his favor this race and so was his speed over the rest of the competition. Adam went 1-1 over the day earning him a large number of points due to the fact that another competitor, Marvin Musquin, also had a bike malfunction. Two good starts certainly helped Adam rise to the occasion to earn his first ever 1-1 victory in the 450 class. 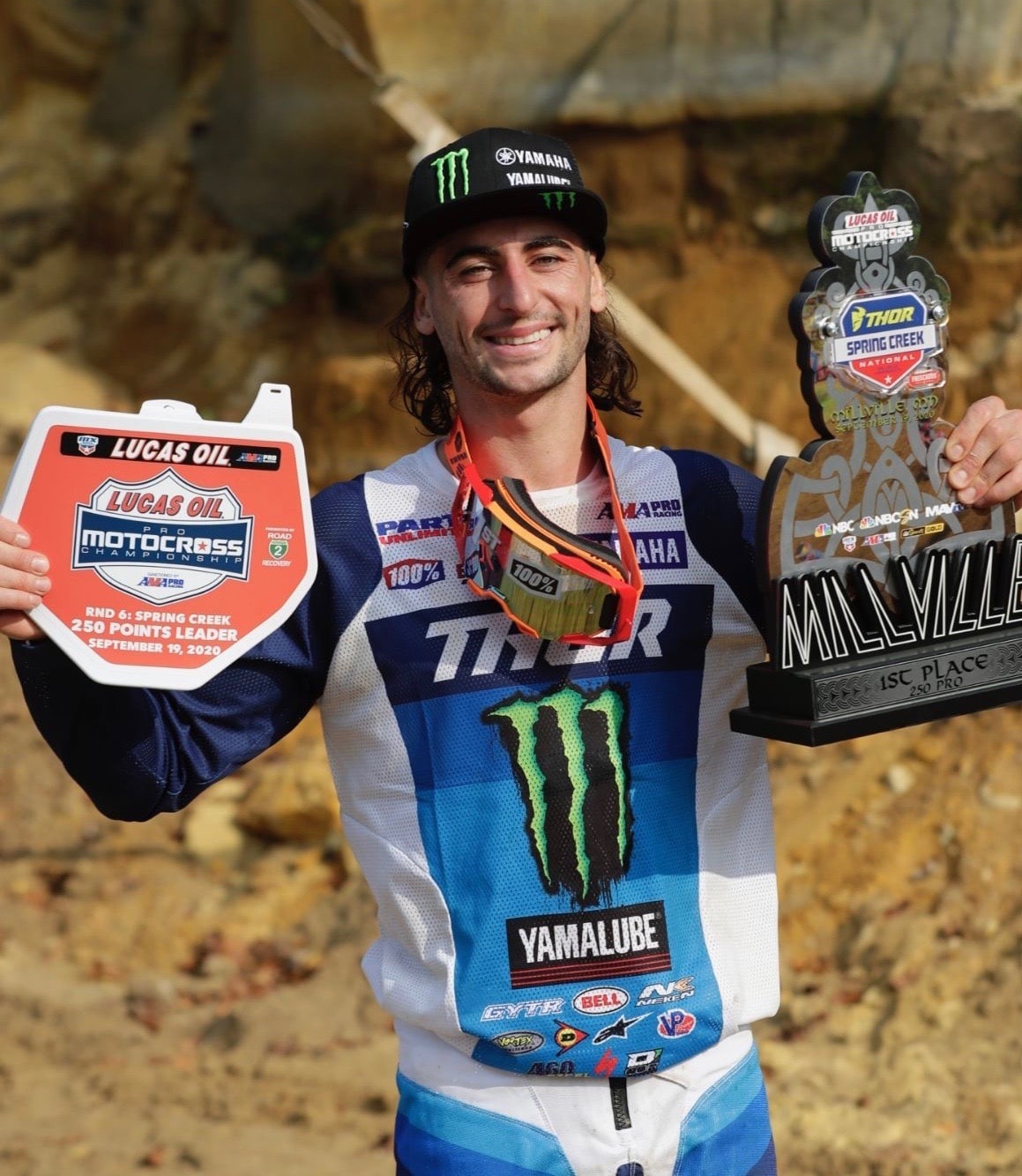 Dylan Ferrandis went 1-1 for the day and, with that, earned the red plate.

The racing that was exhibited by the 250 class has been the most exciting we have seen this season. With side-by-side battles going on, we were at the edge of our seats wondering who exactly was gonna walk away with the most points after the weekend. It was no surprise that Star Yamaha was going to be fast but of those riders, Dylan Ferrandis showed incredible speed. After qualifying first and second, the Martin brothers, who were quite literally at their home track, were also among those who we thought would do really well. And that they did. Unfortunately enough, Jeremy Martin’s incredible determination and speed was just not enough to get past the Frenchman. And after having a non podium first moto, the red plate was Dylan Ferrandis’s to take. R.J. Hampshire is third in the 250 Championship point standings.