The 2020 Anaheim 1 Supercross is officially underway. As usual, the 250SX West division is stacked with competition and the 2020 Monster Energy Supercross season is shaping up to be an exciting one. Dylan Ferrandis is racing to defend his number one plate and hopefully earn another title, Justin Cooper is searching for his first 250 Main Event win and Championship after finishing a close second in points to Chase Sexton in 2019 in the East Coast 250SX division. Qualifying behind Ferrandis and Cooper was Geico Honda’s Christian Craig who was recently released from his FIM suspension, just in time to compete at Anaheim 1. Austin Forkner had a few crashes during practice earlier today and after the final crash got up slowly, but he looks to be ok. Justin Cooper grabbed the holeshot in the first 250 Main Event of the 2020 Supercross season, but it was Austin Forkner who made a quick pass on Cooper to take over the lead. Christian Craig was third and Dylan Ferrandis was buried in the pack. Michael Mosiman started on the very outside gate and he made his way through the first turn well inside the top ten and after a few laps he found himself in fourth. Dylan Ferrandis made a move on Mosiman and set his sights on Christian Craig, Justin Cooper and Austin Forkner. Austin Forkner made a mistake in the first base line rhythm section and almost crashed, he was able to save it though and he was pointed backwards on the track when he collected himself. Justin Cooper and Dylan Ferrandis both passed Austin and they went on to finish just like that with Cooper, Ferrandis and Forkner one-two-three. Christian Craig finished fourth with Michael Mosiman fifth, Cameron McAdoo sixth.

*Austin Forkner was docked two positions for cutting the track.

*The AMA originally delayed posting the official results from the 250 Main Event. The reason being, Austin Forkner cut the track. After a mistake in the rhythm section, Austin found himself pointing backwards on the landing of a jump. Instead of turning around and going into the turn, he cut in between the tuff blocks and rejoined the track on the next lane over. No doubt, Austin would’ve lost more time if he had to turn around, but he also might have caused another crash by making a U-turn on the landing of the jump. The end penalty from the AMA was to be docked from third position to fifth in the race and in the point standings. Michael Mosiman won the first 250 LCQ of the season.

After crashing in his heat race, Michael Mosiman had to go through the LCQ to qualify for the Main Event. Michael grabbed the holeshot and the early lead. He rode a smooth race and pulled a big 23 second gap over Mitchell Falk who finished second on his new BWR Honda racing ride. Martin Castelo and Aaron Tanti unfortunately had a huge crash together on the opening lap of the LCQ and they both got up slowly. The real battle of the race was for the transfer position, Chris Howell fought a hard LCQ and made an all-or-nothhing pass on Taki Koga in the last turn to secure the final spot in the main event. Dylan Ferrandis has had a stellar day so far. He qualified first and won his heat race.

Christian Craig grabbed the holeshot and the early lead in 250 heat race number two, but it was defending Champion, Dylan Feerrandis who made a quick pass on him in the second turn to take over the top spot. Christian stayed close early in the race with Cameron McAdoo a little ways behind. The top three had a large gap on Brandon Hartranft who was fourth early. Towards the end of the heat, Cameron McAdoo put on a hard charge and caught up to the rear tire of Craig, but he wasn’t close enough to try for a pass. 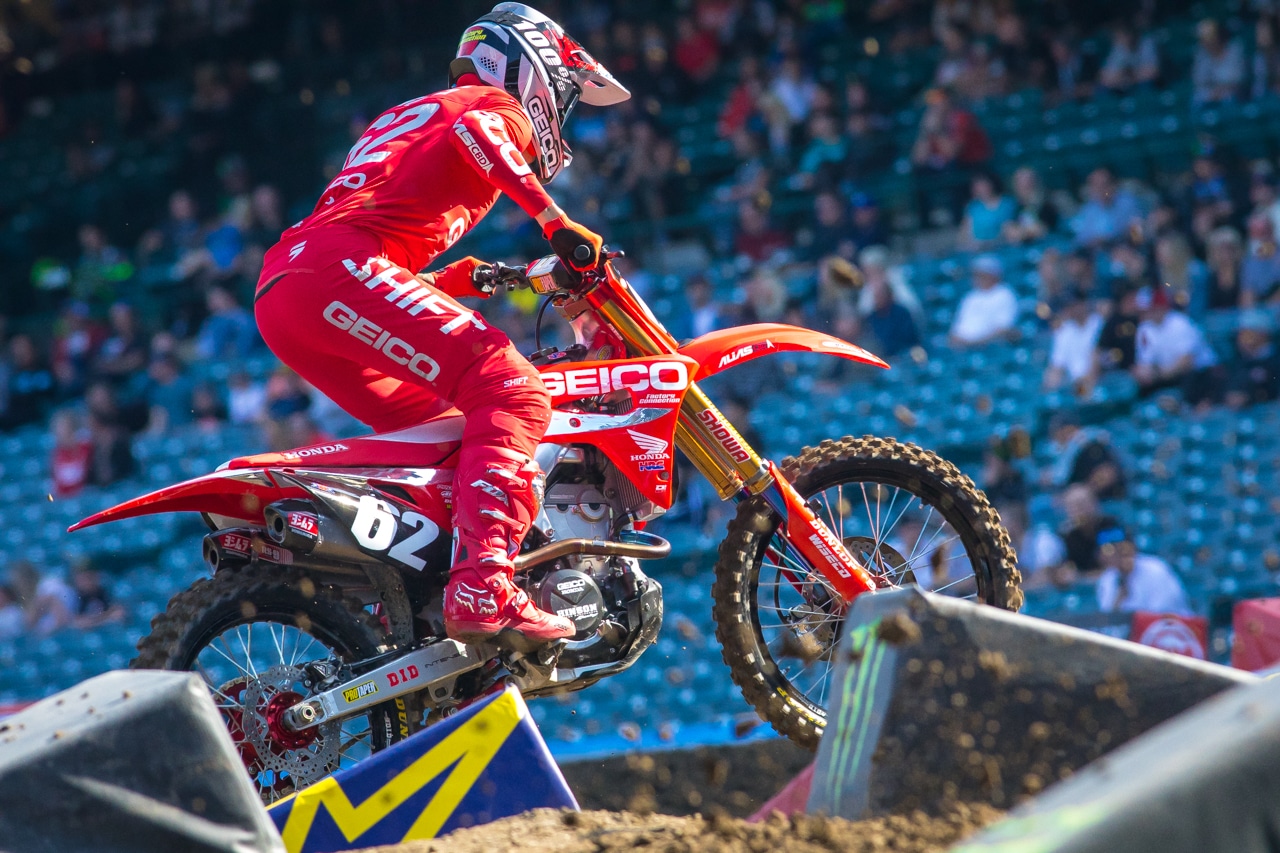 Austin Forkner was third in the first 250 heat race.