Anaheim 1 Supercross is officially here and all the stars of Supercross and motocross are primed and ready for the first gate drops of the 2020 Monster Energy Supercross season. It’s a nice, sunny day in Anaheim, California, and the track is looking good as the riders checked it out during the first official track walk of the 2020 season. Some riders look intensely at all the details of the track while others take a glance at each section slowly, knowing that it always looks scarier on track walk than it is on the bike. The track walk can also be a little fashion show for some riders as they wear expensive sun glasses, fancy hair-doos (see Jett Lawrence above) and nice shoes, while other riders go with the “official pit shirt” approach. Either way, we are excited for the Supercross season to be here and we took the chance we had on track walk to snag some photos of the stars of Supercross. Trey Canard and Chad Reed catching up during track walk. Austin Forkner is racing the west coast 250 class this year. Dylan Ferrandis will be racing on the West Coast and running the number 1W to defend his 2019 Supercross title. Dylan wasn’t 100% sure which coast he wanted to race on until the last minute. Shane McElrath was on call to compete on the West coast if Dylan decided that he wanted to ride East. Shane even rode the press day at Anaheim 1, but he confirmed, Saturday morning of Anaheim 1 via instagram that he will compete on the East Coast. Mike Brown has joined the Baker’s Factory crew as one of the trainers. He works mostly with the Troy Lee Designs Red Bull KTM team. The Champ, Cooper Webb is excited for the new season with the #1 plate. 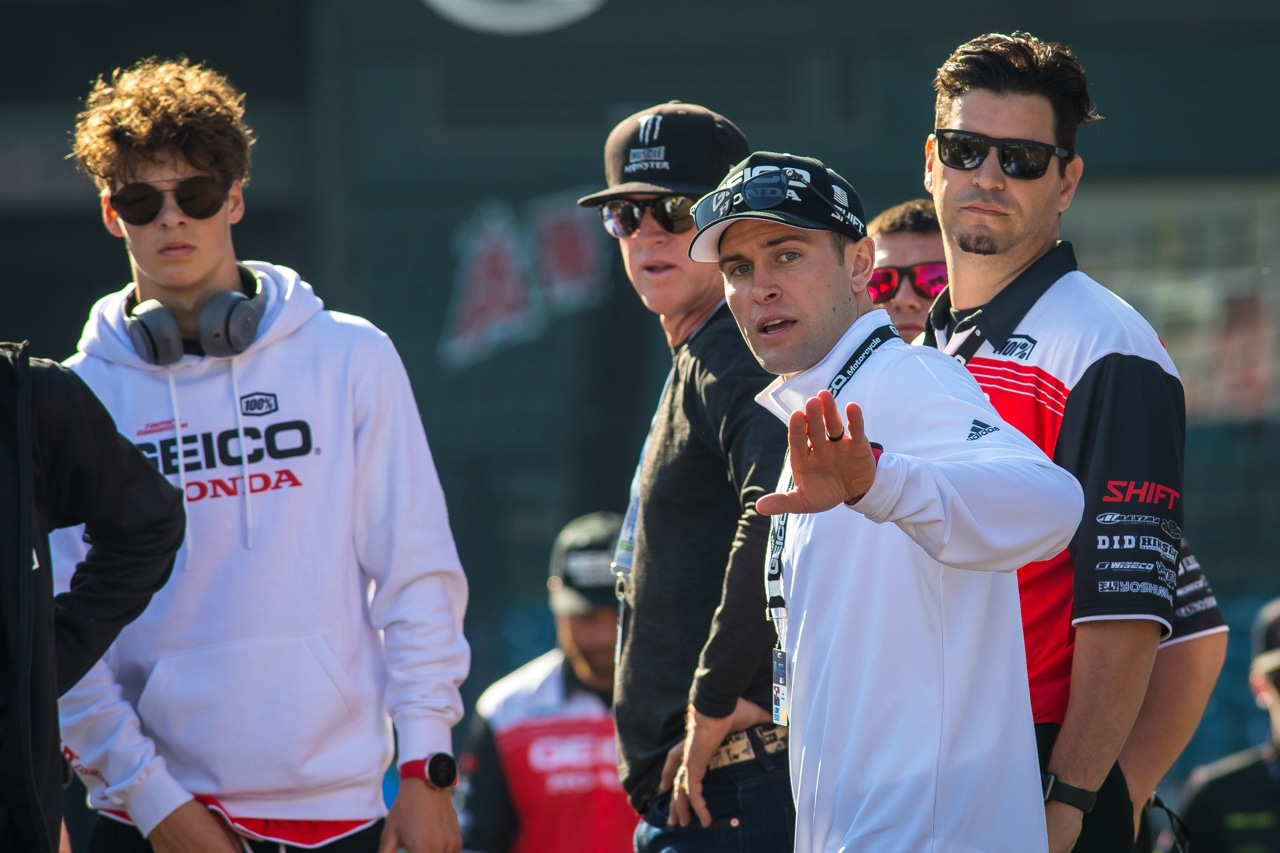 Ryan Dungey giving Jett Lawrence and the Geico Honda guys some tips about the track. Red Bull KTM’s Supercross rookie, Derek Drake. Derek will be running the #57 this year. Derek is from Paso Robles, California, and he has a close relationship with former TLD KTM rider, Jessy Nelson who also grew up in Central California. Jake Vanada, the Supercross and motocross Chaplain gave a short message after the riders meeting for any riders or team members who wanted to stay. He used these 100% sunglasses as a prop for his message about gaining 2020 vision this year. Nick Wey was on the track to help out Adam Cianciarulo. Nick has been helping Adam as a riding coach and trainer for the last few years. Jimmy Decotis will be racing the 450 class this weekend at A1. 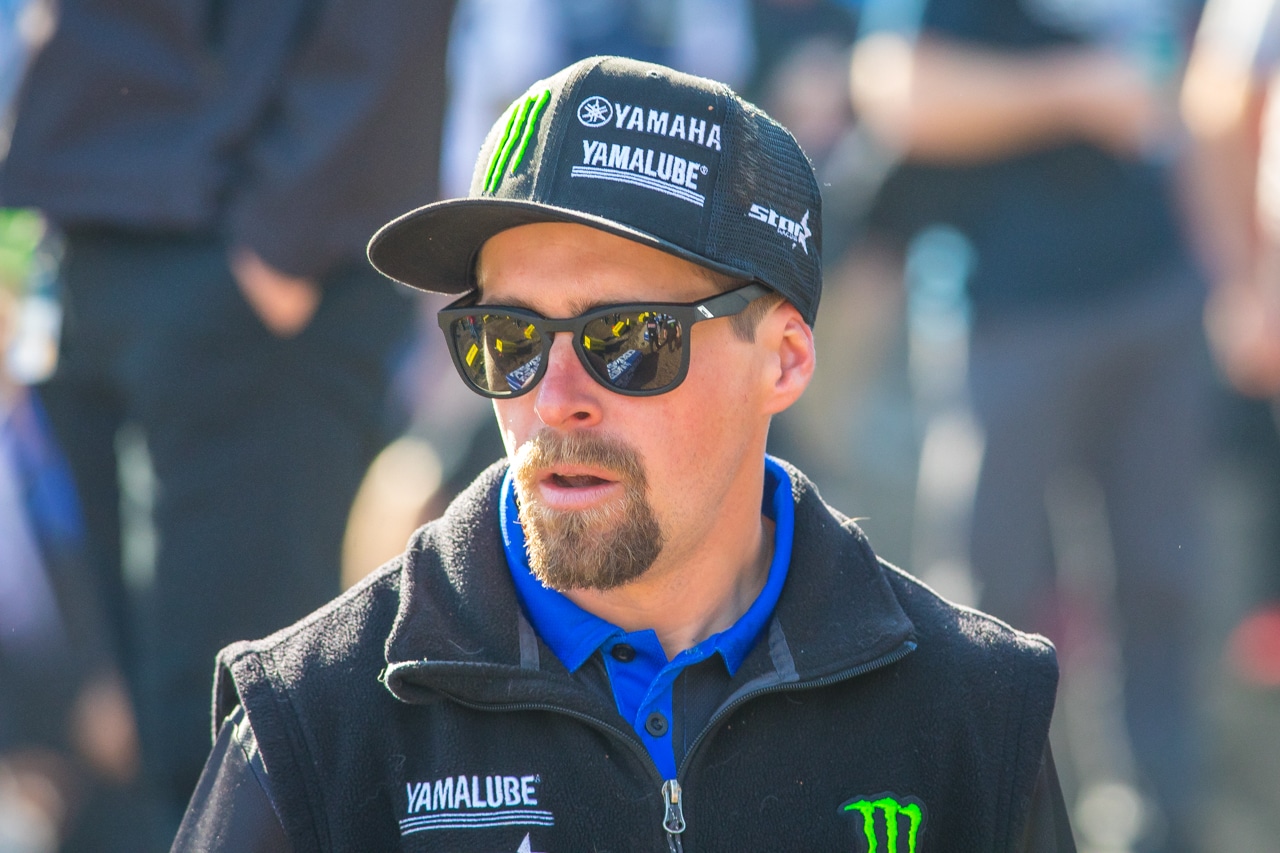 Martin Davalos found a 450 ride for 2020 on the Team Tedder Monster Energy squad. Martin will be riding a blacked out KTM 450SXF. Kyle Lewis and his rider he’s been training, Cade Autenrieth. Jacob Hayes rode for the Cycle Trader Yamaha team last year and he did well in the 250 West class. This season he has joined the AJE Husqvarna team. Carson Brown is a good friend of the MXA crew. His Dad and uncle own the famous pit bike company  “Brown Brother’s Racing,” better known as BBR. Carson is once again racing the 250 class and he’s riding for the JMC Husqvarna team. The entire industry is hoping to see a healthy Ken Roczen for the 2020 season. He mentioned during the press conference that the illness he has been struggling with is EBV or Epstein Barr Virus. Geico Honda amateur rider, Carson Mumford got out on the track to check out what it’s all about. We expect Carson to make the jump into the Pro ranks in 2021. Jacob Hayes chats with the Australian, Luke Clout (right) about the track. Jacob was recently racing in the Australian Supercross series during the offseason.