Anaheim 1 press day was an emotional one fro Chad Reed talking about his last year racing Supercross in 2020.

The Friday before the 2020 Anaheim 1 Supercross, Press Day was held. It is generally always the same. Crowed, busy and a ridiculous hype around the season opener. However, this year was a bit different. They brought up all the team managers in front of the media as we got to ask them questions. It was nice have a different perspective coming into a new year of racing instead of the usual rider comments.

This press day was also an emotional one. This year will be Chad Reed‘s 18th season racing professionally on U.S. turf.  It will also be his last. After Ricky Carmichael praised Chad for his amazing, long career, Ricky asked him a simple question that opened up a lot of emotions for Chad. Ricky asked ,”what’s going through your head right now.” Not long into his answer Chad’s eyes started filling up with tears. He had as an amazing ride, although he said it was time to move on to something different. He now has a passion for racing cars, which will be his next endeavor in life.

The rest of the day was business as usual. The top 450 SX riders talked about training in the off season, how they liked their bikes and what their goals were for 2020. Duh guys, to win of course. After all the riders talked, they got out onto the track to spin some laps for the media. These three (Leigh Diffey, Will Christien, Ricky Carmichael) will be brining you all the Supercross action and entertainment when you are on the couch. The Supercross team managers were the first ones in front of the press to ask questions. Eli Tomac was pretty quite. He seems to be under the radar for 2020. The reigning Supercross champion Cooper Webb will be wearing the red plate for Anaheim 1. Malcolm Stewart is fast but he needs to stay healthy to be in the championship race. After the interviews were over the riders put some laps in for the media. Ken Roczen does a practice start to get used to the tacky Anaheim SX dirt. Everyone is excited to see where Adam Cianciarulo fits into the mix throughout the season. Justin Barcia won last year at Anaheim 1 in the mud. Can he do it again? It will be interesting to see if Cooper Webb can turn the pressure into motivation for this 2020 SX season. Eli Tomac is always a force to reckon with. However his inconsistence seems to always get in the way of a championship. The sand section looks like something you would find at an outdoor National. It looks a bit strange that Tomac is wearing his googles without his helmet. What he is doing is figuring out what color tint lens he wants to use for practice. Zach Osborne should be turning heads this year. 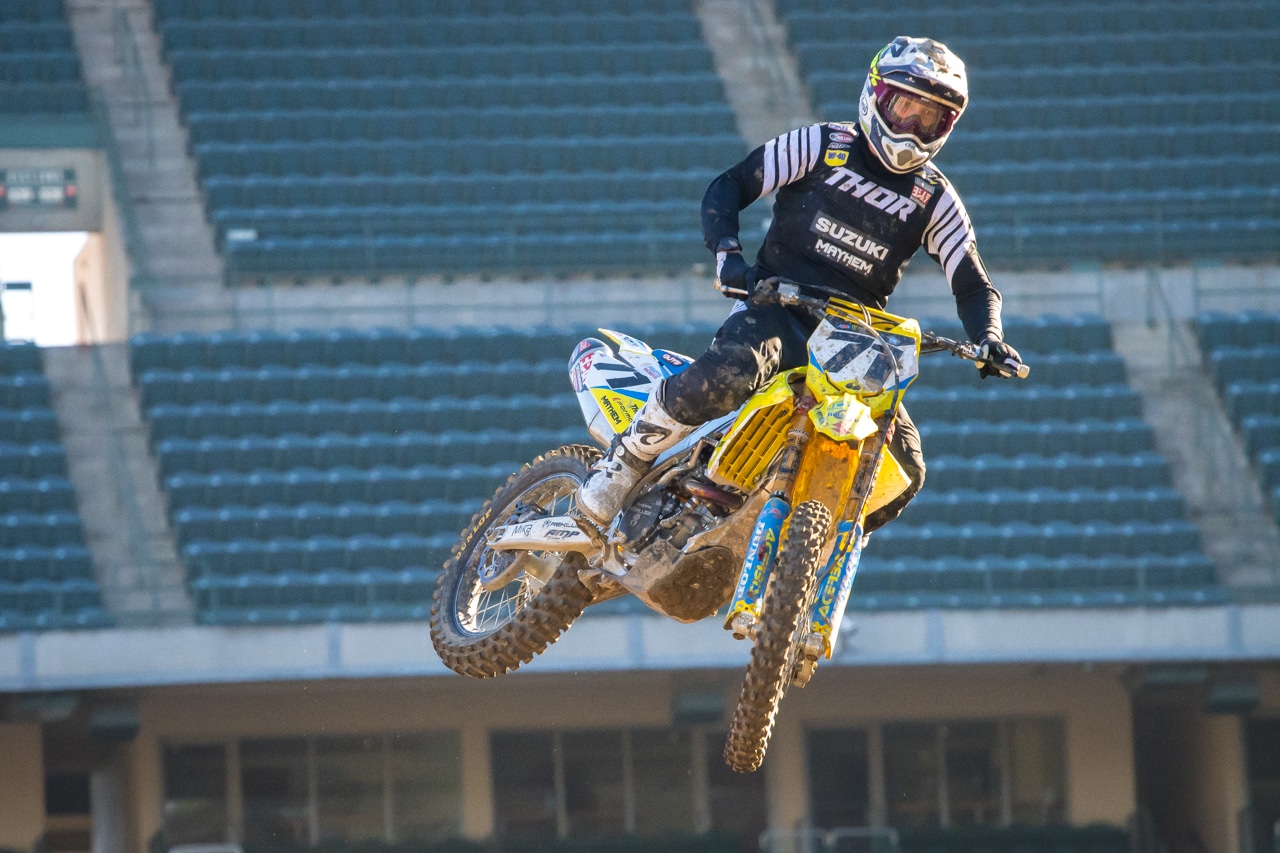