Isak Gifting is making the most of his fill-in ride at GasGas. He went 5-5 for fourth overall in only his fifth GP. Ben Watson is working his way up in the standings. He was second in Lommel. Jago Geerts won the first moto, but was seventh in the second 250 moto. The Yamaha factory rider is 61 points behind with four races left. Jeremy Seewer (91) wheelies off the line, while Tony Cairoli keeps it on the straight and level. 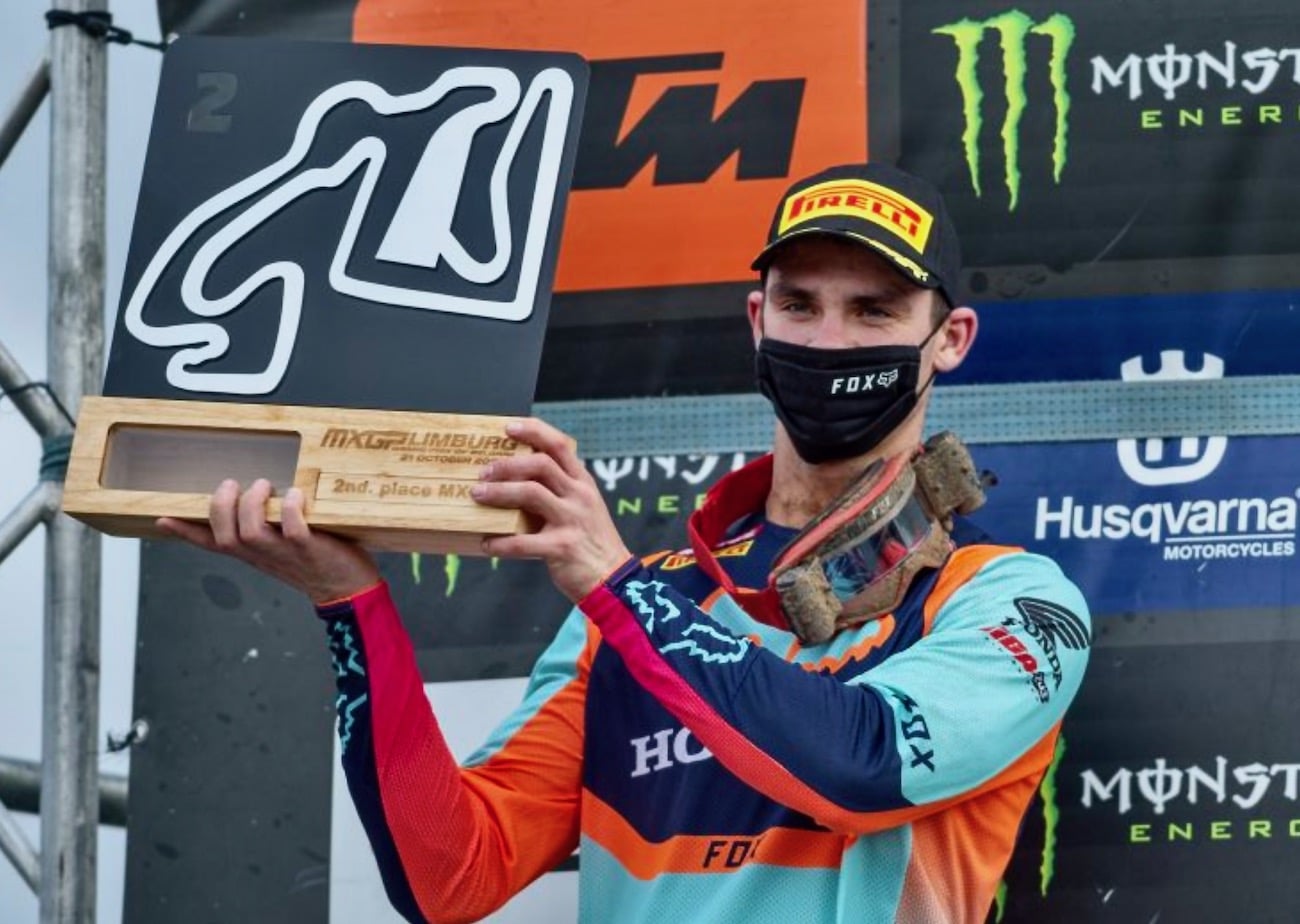 Tim Gajser won the first moto, but his third in moto two handed the overall to Jorge Prado at the second round of three at the Lommel sand track in Belgium. This is Gajser’s second place trophy. Romain Febvre was fourth on the day and is fifth in he standings.

Conrad Mewse fell sick with what the Hitachi KTM team is tonsilitis and sat out this week’s race to be ready for Sunday’s race at Lommel.

Mathys Boisrame started to suffer from the effects of a concussion he got over a month ago, and even though he was in the top ten in 250 points he elected to take the rest of the season off.

Glenn Coldenhoff fractured his T3 and T4 vertebrae a week ago and will not return until the 2021 season.

Jeffrey Herlings was leading the 450 World Championship when fell in free practice at Faenza and broke his C1, C6 and T3. Jeffrey says his back has healed, but since he missed so many races he was goiNg to take the time to have a nagging foot injury fixed.

2017 250 World Champion Pauls Jonass crashed during the coronavirus delay breaking some ribs, several spinAL processes and other injuries. He is out until 2021.

Shaun Simpson crashed in Latvia and was beat up, but he then had a practice crash and suffered a spinal injury. He didn’t need surgery, but he won’t be back this season.

Arminas Jasikonis crashed in Lombardia and was placed in a medically induced coma. He has since improved and is recovering.

Henry Jacobi crashed last week in timed practice qualifying at Lommel and dislocated shoulder. He will sit out the rest of 2020.

Alessandro Lupino tore a ligament in his knee in the second moto at the Grand Prix of Lombardia. He is having it repaired to be ready for next year.

Thomas Covington is the lucky one on this list because he isn’t injured at all. He just decided to quit at mid-season. He says that he will pursue other interests—but not motocross.