Round 12 of the 2020 Monster Energy Supercross season is back in Salt Lake City, Utah, and Eli Tomac is looking to extend his 8-point lead while Ken Roczen and Cooper Webb are doing everything they can to finish ahead of the Monster Energy Kawasaki rider. After the 85-day break, the 450SX riders resumed their season last Sunday in Salt Lake City and kicked off a 22-day, 7-race, hurry-up schedule to finish the 2020 Supercross season. The first race in Salt Lake City was held during the heat of the day and with high temperatures and the elevation, multiple riders struggled with fatigue and the track conditions suffered as well by turning into an extremely dry and dusty course. Check below for Heat race, LCQ and Main Event Results being updated throughout the night. Cooper Webb wins at Round 12 in Salt Lake City.

Ken Roczen and Eli Tomac were buried in the back of the pack around the first turn while Zach Osborne grabbed the holeshot and early lead. Cooper Webb was up front and moved into second on the opening lap while Eli and Ken were battling back in eight and ninth. Ken was able to get by Tomac and get into sixth and then after a few sketchy runs through the whoops, Ken was able to pass Dean Wilson and get into fifth. The pressure was on for both Ken and Eli as they fought through the field, but luckily the track wasn’t as dry so the riders didn’t have to worry about dust like they did on Sunday. Meanwhile, with 15-minutes left Osborne still had the lead with Webb and Anderson behind. Ken and Eli both passed Barcia and then they were putting pressure on Anderson for third. With just over 11-minutes left, Ken Roczen was jumping through the whoops while Eli skimmed right behind and slid up the inside to make the pass on Roczen for fourth place. On the next lap, Eli Tomac made the same move on Anderson to get into third and it looked like the rest of the pack was getting tired while Eli was staying steady. Zach Osborne held on strong in the lead for over 75% of the race, but after pressing on Osborne lap after lap, Cooper Webb was able to block pass him and gain the lead. Meanwhile, Tomac also closed up on the leaders and he passed Osborne just a lap later to get close behind Webb in second. Tomac pushed hard, but he wasn’t able to close the gap. Cooper Webb won the race, Tomac finished second and his rival in the points, Ken Roczen looked tired during the last half of the race and finished fifth. Zach Osborne held strong in the lead for a majority of the race. Ryan Breece grabbed the holeshot in the 450 LCQ and Smartop Honda rider Justin Hill was in second. Freddie Noren was around the top five when he slid out in the slick turn next to the mechanics area. Freddie was back in 12th but fought all the way up to sixth quickly. Justin Hill also made his way around Ryan Breece to grab the lead. Carlen Gardner ran in third on his BWR Honda. Carlen then made his way passed Breece to get into second and Adam Enticknap got around Breece as well, but Ryan would still transfer into the Main Event with a fourth place. Carlen Gardner finished second in the 450 LCQ and made it to the Main Event in his second race back from injury. Ken Roczen grabbed the holeshot while Eli Tomac was buried in about seventh on the start of the second 450 Heat race. Ken cruised out front and pulled away while the battle happened behind him. Benny Bloss was making ground up in the whoop second and dove inside of his teammate Blake Baggett and took him out in the turn after the whoops. Blake seemed like he didn’t expect to see his teammate there and we are wondering how the Rocky Mountain team was feeling when their fill-in rider took out their star rider. Zach Osborne was second and Eli Tomac passed his way through the pack to get by him with two laps to go. The whoops are long and brutal and they are playing a huge role in the outcome of each race tonight. Eli Tomac fought through the pack to finish second. The whoops are gnarly today… Benny Bloss is the tallest rider at the race and his strong point is the whoop section. 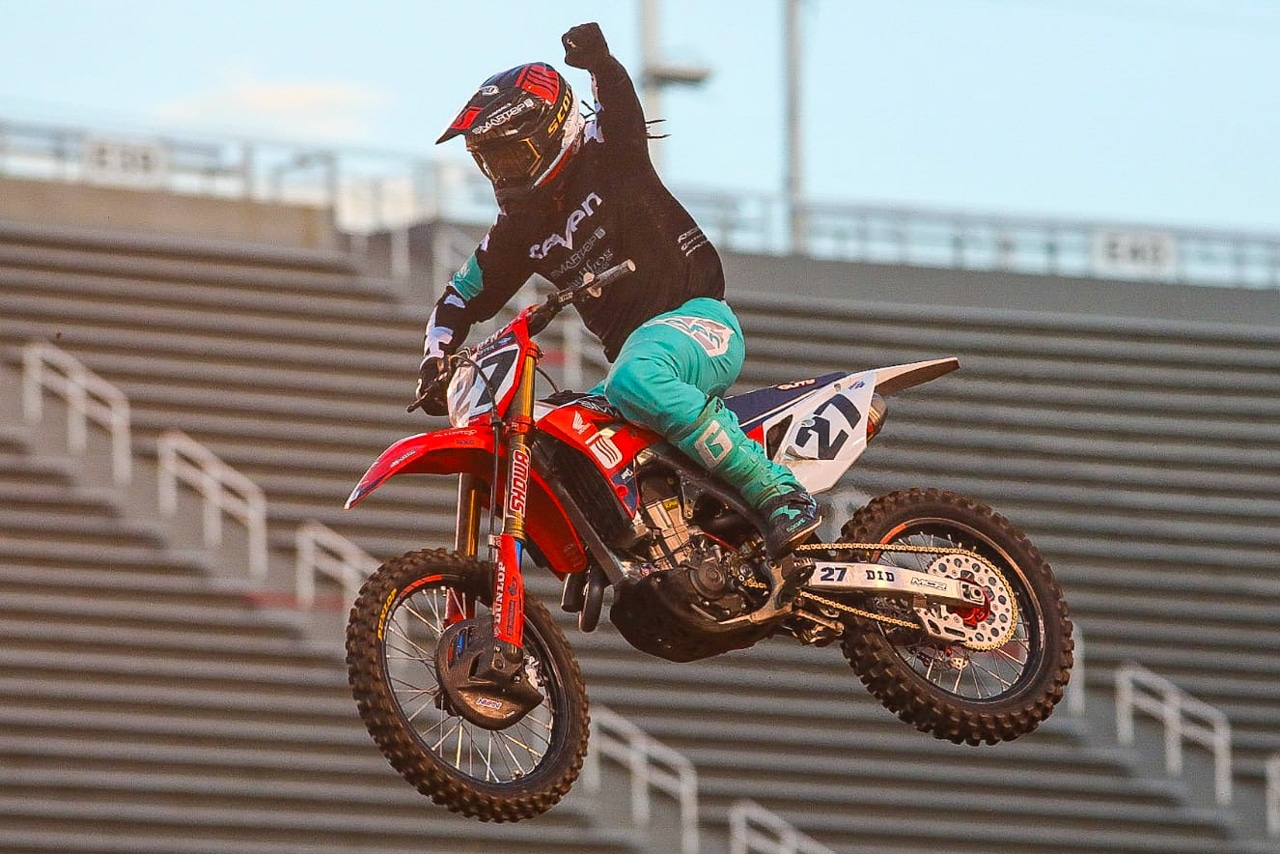 Cooper Webb grabbed the holeshot in 450 Heat race number two with Supercross legend, Chad Reed in second and Malcolm Stewart third. Stewart was able to get by Reed quickly and then Jason Anderson got around him on lap two. Malcolm Stewart was riding really good and was keeping pace with Cooper Webb at the beginning of the Heat. Malcolm was especially catching Webb in the long and steep whoop section. The track conditions are also much better tonight in SLC and everyone is happy to see that. Malcolm Stewart continued to make up time and eventually pass Cooper in the whoop section. Cooper tried everything he could on the last lap to get back into the lead, but he couldn’t get around Stewart and Jason Anderson even caught Webb at the finish line. Cooper Webb battled hard, but finished second in the Heat. MXA’S WEEKEND NEWS ROUND-UP: 2020 AMA NATIONAL SCHEDULE — WE KNOW WHERE IT STARTS, EVERYTHING ELSE IS FUZZY