The 2020 San Diego Supercross is here and the 250SX West class are ready to go for round six of the 2020 Monster Energy Supercross season. The San Diego SX is the last round for the West Coast 250 riders before they take a break and the 250 East division kicks off. Dylan Ferrandis, Austin Forkner, Justin Cooper and the rest of the 250 class are all looking to make a statement before their series takes a break. Once again, Dylan Ferrandis was the fastest rider in qualifying and he’s looking to carry that momentum into the Main Event to extend his points lead and retain the red plate. MXA is in San Diego for the military appreciation round and we’ve been doing our best to capture all the action and bring our viewers rapid results throughout the day. Stay tuned for heat race, LCQ and Main Event results from the San Diego Supercross. Dylan Ferrandis wins his third Main Event of the season in San Diego.

Michael Mosiman grabbed the holeshot in the 250SX Main Event and he held a steady lead for four laps with Austin Forkner and Dylan Ferrandis battling behind him. Austin Forkner was gaining time on Mosiman and eventually block passed him in the corner before the first whoop section. Then, Dylan Ferrandis passed Mosiman shortly after and the race was on for the lead. Austin started pulling, but Ferrandis was fast through the second whoop section and he was making up time on the Pro Circuit Kawasaki rider. As the race dwindled down, Dylan continued to close and after a few failed attempts, he eventually made the move and pushed Forkner off the track to grab the lead and eventually the Main Event win. Austin Forkner now sits 13 points behind Ferrandis in the point standings. Click here for the 450 and 250 points after San Diego. Robbie Wageman battled hard, but unfortunately he missed the 250SX Main Event by one spot.

Martin Castelo grabbed the holeshot and went on to win the 250 LCQ, but the real battle was all behind him for the top four positions. Cheyenne Harmon finished second, Ludovic Macler passed from fifth into a third on the final lap, bumping Robbie Wageman out of the Main Event and Lorenzo Camporese back to fourth. The impressive part is that Ludovic is riding on a bored KTM 250SXF after his Kawasaki KX250 broke this week. The second 250 Heat race started with Dylan Ferrandis out front, Justin Cooper in second and Michael Mosiman in third. Luke Clout battled with Mosiman in the first turns, but eventually Mosiman would inherit third. From there, Dylan Ferrandis stayed right in front of Cooper and Mosiman, but on the final laps he started to pull away. Justin Cooper got caught behind some lappers on the final lap and Mosiman had been catching him slowly. Michael Mosiman dove inside of Cooper in the off camber corner to make the pass into second on the last lap. Austin Forkner won the first 250 heat race of the night.

Austin Forkner grabbed the holeshot but JMC Husqvarna rider, Carson Brown was able to get by him and lead for a few corners before Cameron McAdoo took over the lead. Then Austin got around Brown as well and went to work on his teammate. Eventually Austin was able to get by McAdoo in the whoops and pull away. Derek Drake was going fast on his Troy Lee Designs KTM and he would pass Brown and catch up to McAdoo. 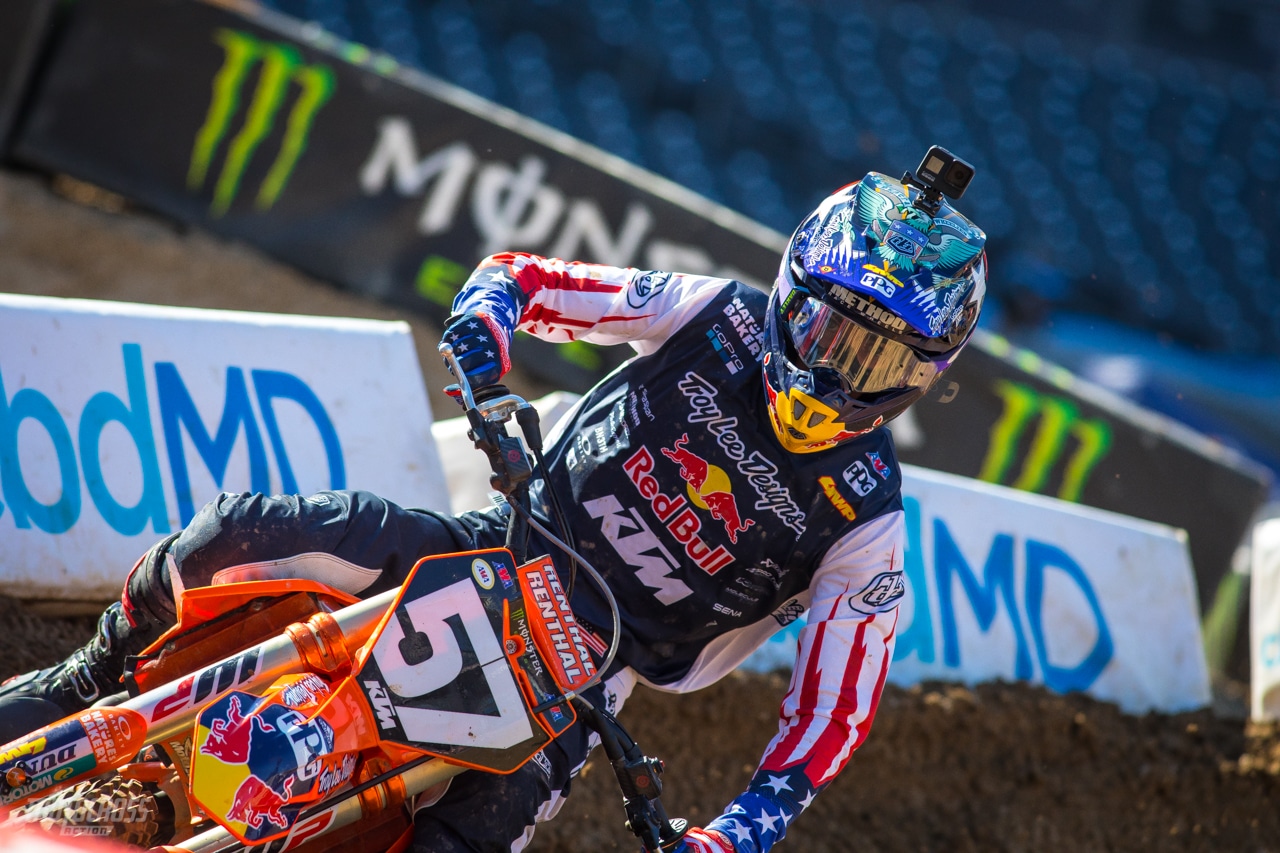 Cameron McAdoo is looking fast in San Diego. He finished second in the first 250 Heat race.