The St. Louis Supercross is here and the 250SX West Coast regional championship is set to go inside of “The Dome” for round two of the 2020 Monster Energy Sueprcross season. Usually when we talk about the 250 West class, St. Louis isn’t mentioned on the schedule since it’s 1,800 miles East of California where four of the West rounds are located, but this year is the schedule is unique. The factory riders aren’t complaining about the trip, it seems like all of the riders who made it to Missouri are loving the soft but tacky midwestern soil. Coming into round two, Star Racing Yamaha’s Justin Cooper has the red plate after he won his first ever 250 Main Event last Saturday at Anaheim 1. Dylan Ferrandis got a bad start and fought his way to second, but he wasn’t too happy to get beat by his teammate. Austin Forkner finished third, but then was penalized for cutting the track. He will also be looking for redemption tonight at his hometown race. Austin Forkner grabbed the holeshot while Dylan Ferrandis was mid pack. Coming into the first rhythm section Alex Martin ran into Jacob Hayes and then shot across the track to hit Michael Mosiman out and send Michael into Dylan Ferrandis’ landing zone. Alex and Jacob rode away while Mosiman and Ferrandis got up slowly. Austin Forkner lead early with Jett Lawrence second and Christian Craig third. Justin Cooper didn’t have the greatest start, he passed into fourth with ten and a half minutes to go. Justin Cooper quickly caught up to Craig and passed him and also was logging in faster lap times than Austin Forkner at the midway point. With three minutes and 45 seconds to go, Justin Cooper made a sneaky pass around Jett Lawrence after Jett made a big mistake to get into second. Jett caught his foot peg on a tough block and he pulled into the mechanics area to fix his foot peg afterwards. Shortly after while running fourth, Christian Craig had a hard get off in the rhythm section. Brandon Hartranft gained the third spot after Lawrence pulled off and he went on to finish third. Justin Cooper caught up to Forkner at the end of the race, but he wasn’t close enough and Austin Forkner grabbed the win. Justin Cooper came from behind to finish second in St. Louis. 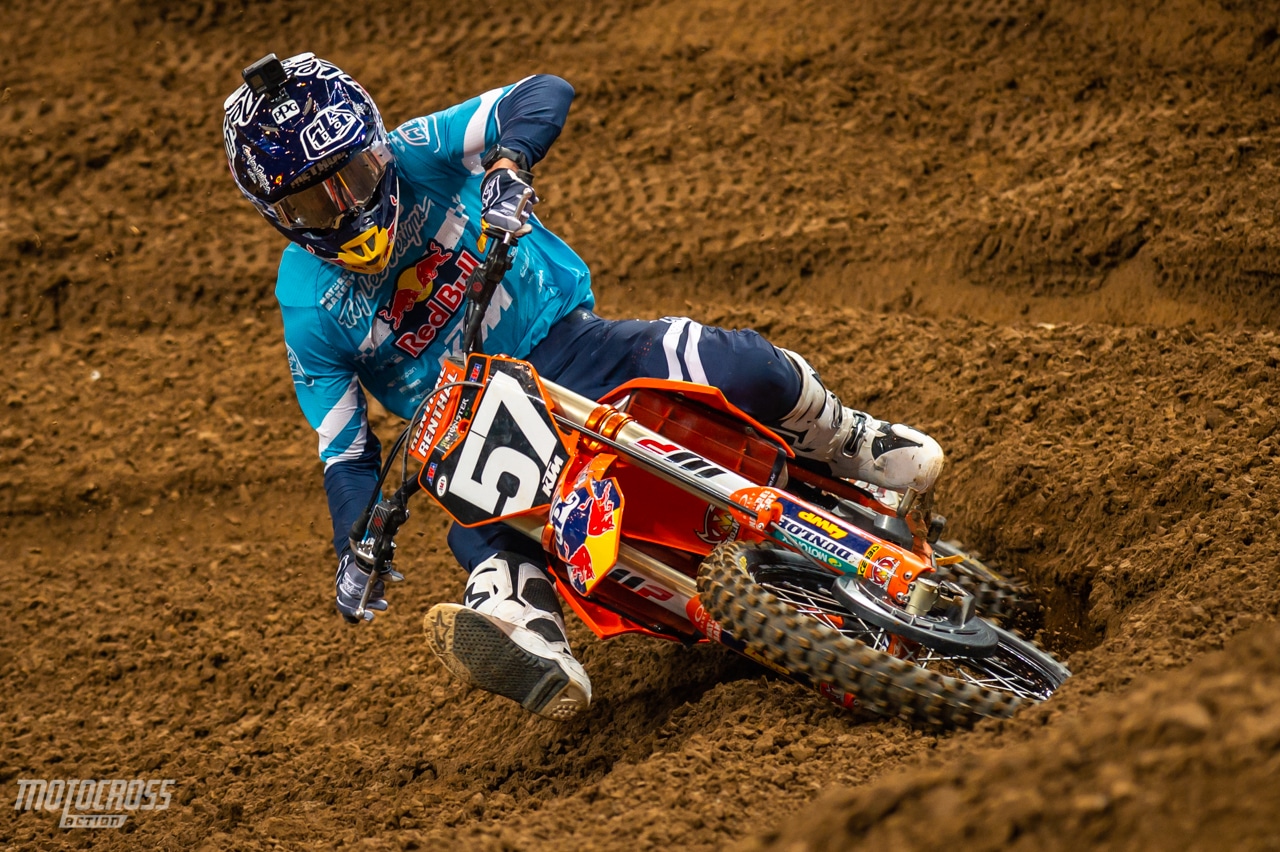 Derek Drake was in the LCQ after crashing on the start in the first Heat race.

Derek Drake grabbed the holeshot again, but this time he was a little smoother around the first turn. Aaron Tanti and Mitchell Falk were second and third early. Derek enjoyed some extra track time and he used it to get some more racing experience in front of the big Supercross crowd. Derek went on to win by over ten second on Aaron Tanti and Mitchell Falk finished close behind him in third. Austin Forkner grabbed the holeshot in 250 Heat race number two but it was Mitchell Oldenburg who made a quick pass to get into the lead. Mitchell led for about a lap before Forkner pushed him out of the way. Dylan Ferrandis had a bobble on the start and he almost went down, but he kept it on two wheels. Jett Lawrence also made a big mistake and took out Taiki Koga in the process. 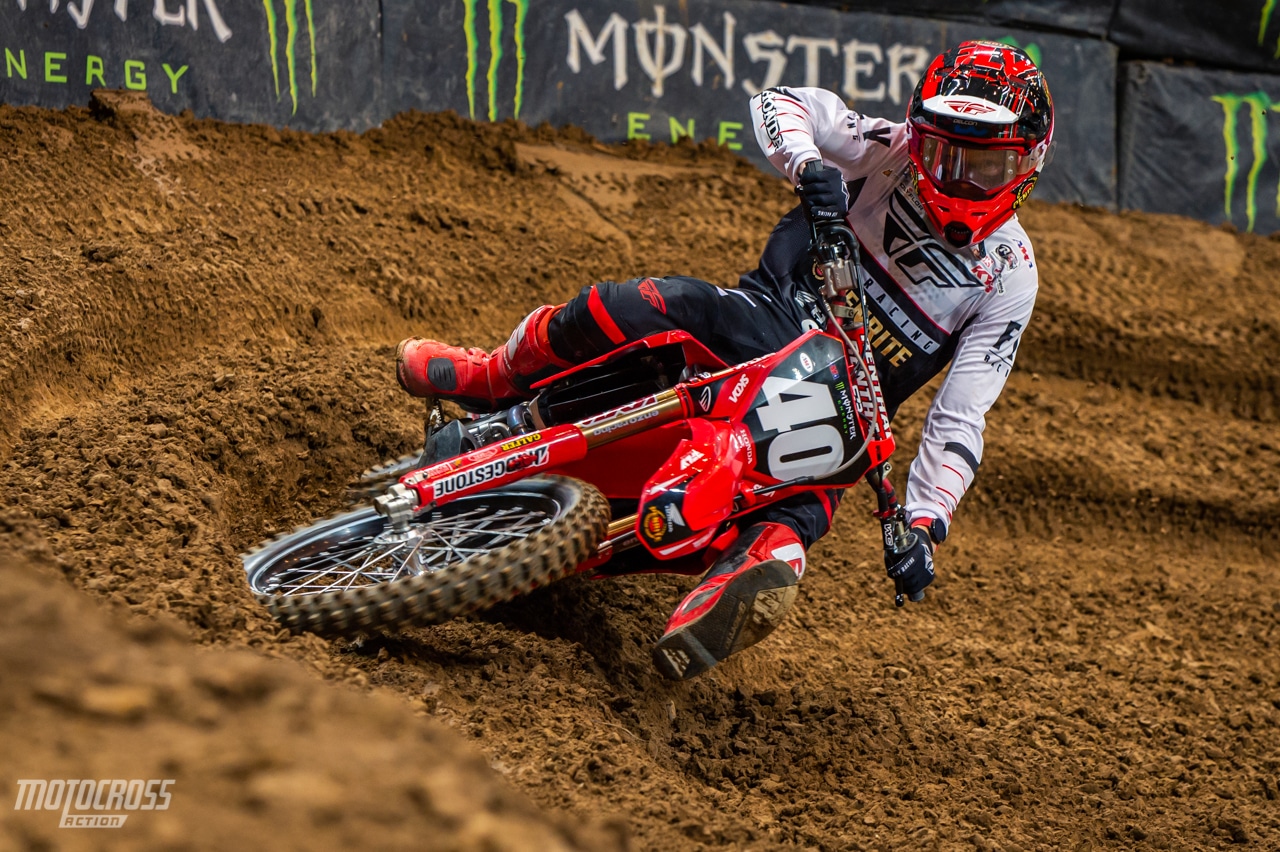 Mitchell Oldenburg passed Austin Forkner early on the first lap of the heat race and he held the lead for a lap. 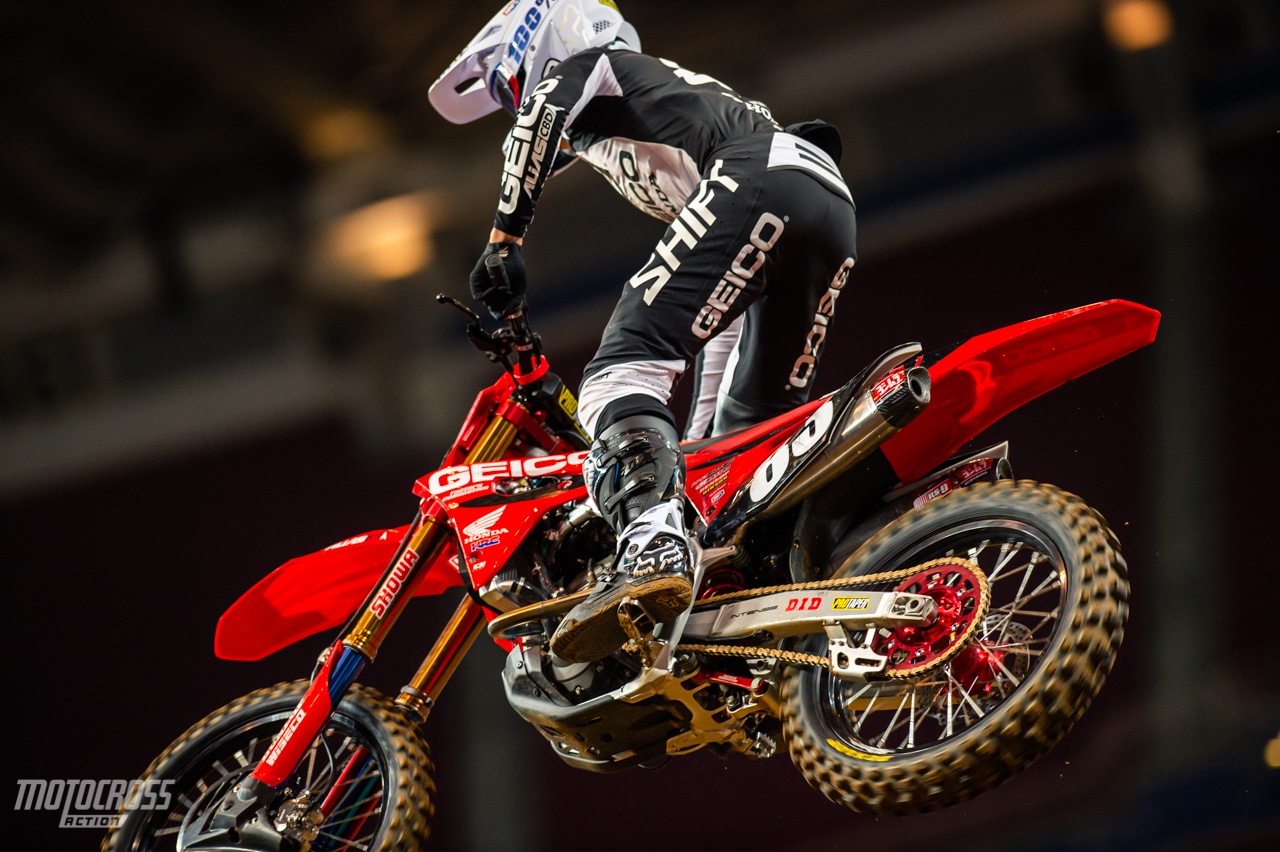 Jett Lawrence made a big mistake and took himself and Taiki Koga out in their Heat race. Jett was able to get up and qualify for the Main Event but Taiki Koga was slower to get up and he didn’t finish the race. Christian Craig won the first 250 Heat race of the night.

Justin Cooper, Christian Craig and the rookie, Derek Drake had the first three gate picks coming into the first heat race of the night. Derek Drake had a great start going into the first turn but he made a wild mistake and slid out and ended up pointing backwards, raising up his front wheel and running into another two other riders. Michael Mosiman grabbed the holeshot and had the lead until Christian Craig passed him on the first lap in the whoops. Justin Cooper was caught up in the first turn crash and he fought his way through the pack to get third place and a good gate pick for the main. WATCH THE ST. LOUIS SUPERCROSS IN UNDER TWO MINUTES: TROUBLES FOR EVERYONE, BUT FORKNER