2020 SUPERCROSS SEASON POINT STANDINGS AFTER ROUND 8 IN ARLINGTON (DALLAS) Eli Tomac gets to keep his red plate going into the next round.

The 2020 Arlington Supercross is officially over with and the points have been updated after the 8th round. This track proved to really take the toll on riders. Both Adam Cianciarulo and Cooper Webb got bit by the same dragons back with Cianciarulo breaking his collarbone and we are unsure the damage to Webb’s body. The Triple Crown posed some interesting racing as usual. The short main events  and extremely long whoops section made it challenging on riders. Below are the current point standing for the 450 class as well as the 250 West and East coast classes. Eli Tomac wins the overall in Arlington and extends his points lead.

Eli Tomac was the most consistant 450 rider in the class by going 5-1-1 for the overall in Arlington. With Adam Cianciarulo breaking his collarbone in qualifying and Cooper Webb going down hard in the same section it left riders like Tomac and Roczen to capitalize on making points. Eli Tomac now has a seven point lead over Roczen with Webb in third. However, we are unsure how bad Webb is hurt. Cianciarulo will drop down significantly in points as he will miss more than a few races to get back healthy. 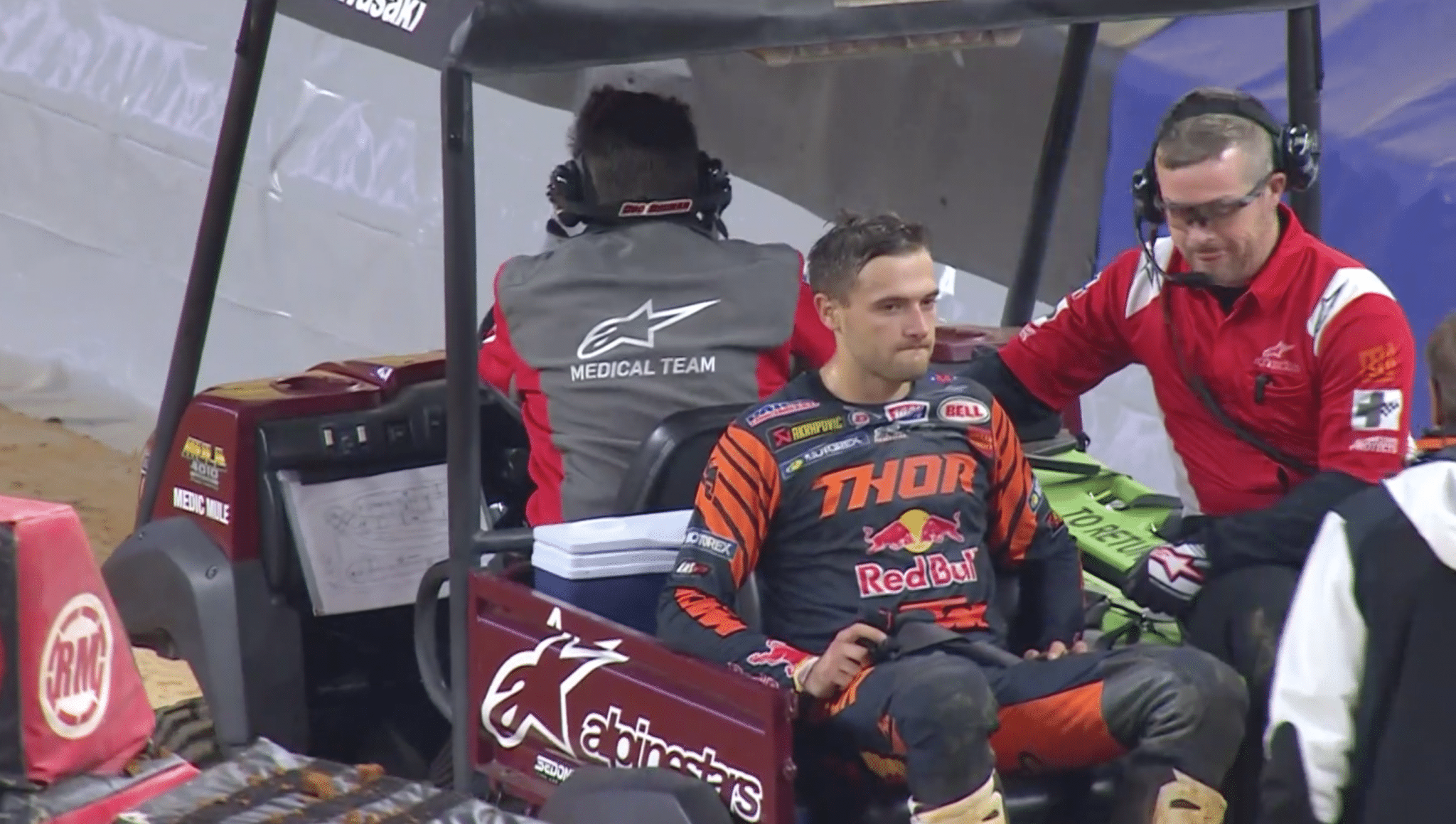 Cooper Webb getting carted off after his big crash.

250 EAST COAST POINTS STANDING AFTER ROUND 2 Chase Sexton and Shane McElrath are tied in points and will both have the red plate coming into the next round of the 250 East.

In the 250 class Chase Sexton was the most consistent on the night going 2-1-2 and last weeks 250 winner Shane McElath went 3-2-1 on the night in Arlington. These two are battling it out for the championship. With both Chase and Shane tied with 49 points that means that both riders will have the red plate at the next round. Dylan Ferrandis won in Oakland and took over the points lead in the 250 West division.

Coming into Oakland, Justin Cooper had the points lead in the 250 class. But after a rough night in Glendale at round four, and a third place in Oakland, Cooper’s teammate, Dylan Ferrandis has taken over the points lead. Dylan looked strong all day in Oakland, he passed his way up to the front on the first few laps and eventually found himself stalking Austin Forkner for the lead. Austin got caught up with some lapped riders and Dylan was able to gain on Austin and come up the inside of him to take over the lead. Now Dylan Ferrandis has a two-point lead over Justin Cooper and Austin Forkner sits only ten points behind Ferrandis in third. Alex Martin placed fourth in Oakland and he sits fifth in the 250 West Coast Championship standings. Austin Forkner is ten points behind Ferrandis in the standings.

VIDEO OF ADAM CIANCIARULO BREAKING HIS COLLARBONE AT ARLINGTON SUPERCROSS

JASON ANDERSON CRASHES INTO A MEDIC AT THE ARLINGTON SUPERCROSS