March 20th was the last time we’ve witnessed the spectacle that is indoor motorcycle racing. No not Arenacross, Supercross! The three-rounds mini-series in AT&T Stadium was one for the books as we saw new point leaders emerge in both the 450 class and 250 West Coast class. Cooper Webb became immensely victorious in Arlington, winning all three rounds, making it the third residency sweep held by one racer (Ken Roczen won all three race at Indianapolis, Cooper Webb won both races in Orlando and then all three races at Arlington). Justin Cooper rose to the occasion at the last of the three Arlington rounds walking out with red plate in hand towards his three week, two-weekend, Supercross break. While some of the riders got some very much needed relaxation, many of the West Coast riders took advantage of the time that they were given to prepare for the Great Outdoors. We saw the likes of many preparing for the 2021 Pro Motocross season, from Malcolm Stewart, Cooper Webb, all the way to Justin Barcia, we captured the Star Yamaha Team, Pro Circuit, and even a handful of premier class riders practicing at Glen Helen here.

Now the teams and riders finally have a chance to stretch their legs at Atlanta Motor Speedway, located in Hampton, Georgia. Unlike the previous Atlanta rounds from years prior, Supercross will not be held in Mercedes Benz Stadium, and instead it’ll be at one of the most popular Speedways in the United States, Atlanta Motor Speedway. Similar to Daytona, the track is going to located on the infield of a NASCAR track. Will we see another exceptional performance by Eli Tomac as he did at Daytona? Or will Cooper Webb extend his lead on Ken Roczen even more? Scroll down below to find out what there is to know for the first of three rounds at Atlanta Supercross.

The Atlanta rounds will be the little sister of the behemoth that is Daytona, but for us, we couldn’t be any more excited. The track is filled with interesting sections, giant straightaways, and it even goes on the tarmac. Click here to see the track map video. Another view at this Saturday’s track. Here’s a build progress update from Supercross as of Monday morning. Photo credit: @Supercrosslive on Instagram

CAN ELI TOMAC GET SOME MOMENTUM BACK? We all know Eli Tomac is the King of Daytona; Now, with three more outdoor Supercross races on the schedule, can Eli grab some wins and get some momentum back on his side?

In his the post race interviews after Arlington, Eli Tomac expressed that he basically out of the 450 Championship fight, unless Cooper and Kenny ran into some serious point-costing issues. But, he did find a lot of hope knowing that the three races in Atlanta would be similar to Daytona. He thinks that these races will be more “Supercross-style” than Daytona, meaning they’d have more rhythms and less sandy/loamy sections. But, Eli still expected his riding style and bike setup to excel at Atlanta. 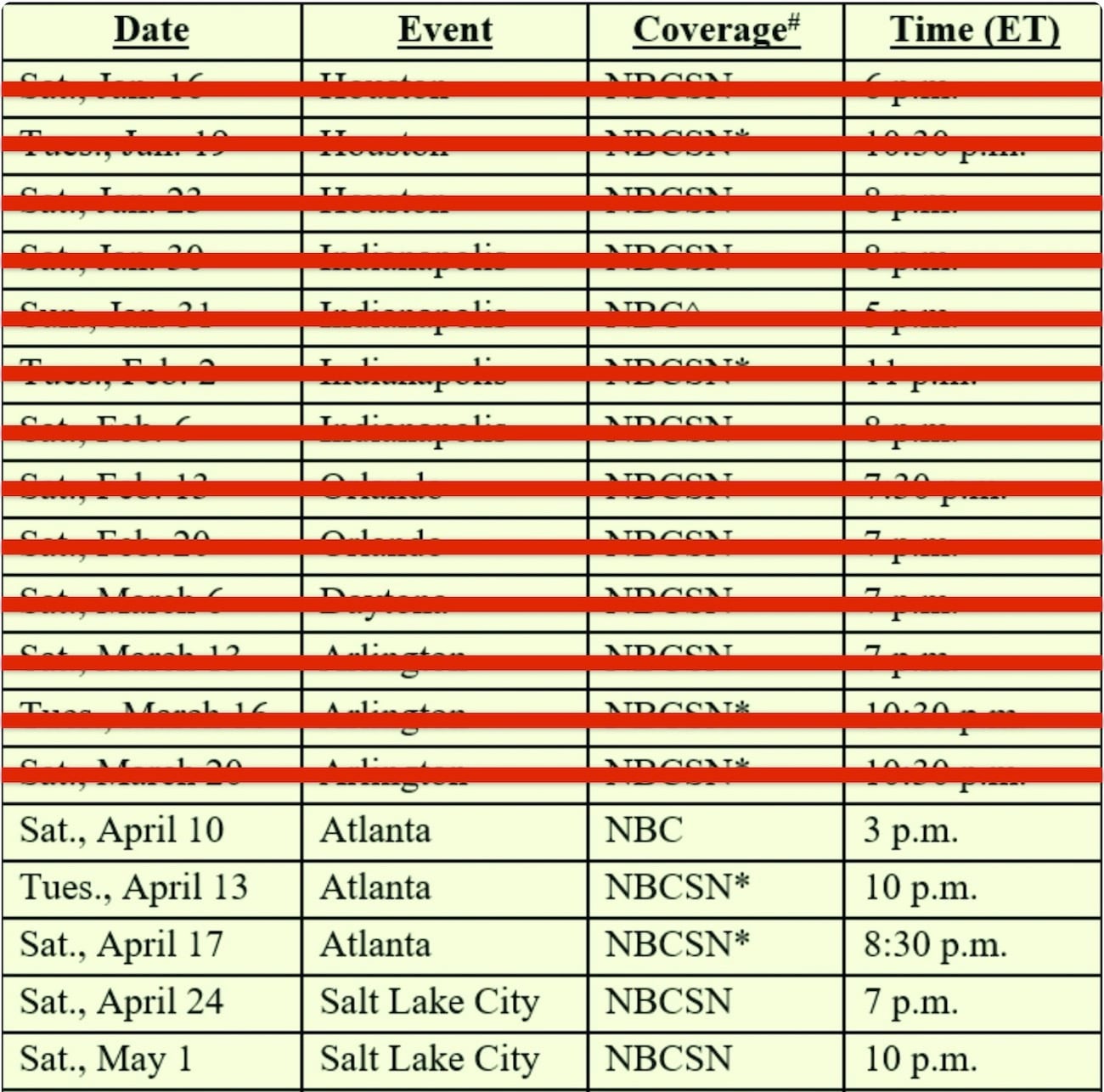 The first of the three Atlanta rounds will be aired earlier than previous rounds in the season.

PEACOCK PREMIUM LIVE STREAMING:
If you don’t have the NBC Sports Channel or you’d prefer to watch the races without any commercials, the weekend races will be aired LIVE on the Peacock Premium streaming service at 12:00 PM Pacific Time, 3:00 PM Eastern Time, the same time as it’s aired on TV. Qualifying practice will also be shown LIVE on Peacock Premium starting at 6:00 AM Pacific Time, 9:00 AM Eastern Time. Cooper Webb reigned supreme in Arlington and he now has a 15-point lead on Roczen and a 41-point gap on Tomac. Eli Tomac was incredibly strong at Daytona. Will the outdoors-inspired Supercross tracks in Atlanta payoff in his favor?

250 WEST SUPERCROSS POINT STANDINGS (AFTER ROUND 5 OF 9) Justin Cooper regained control of the points lead after struggling to get in front of the pack in the races for four rounds. The points chase in between the top three is still incredibly close and it’s exciting to witness the 250 West championship.