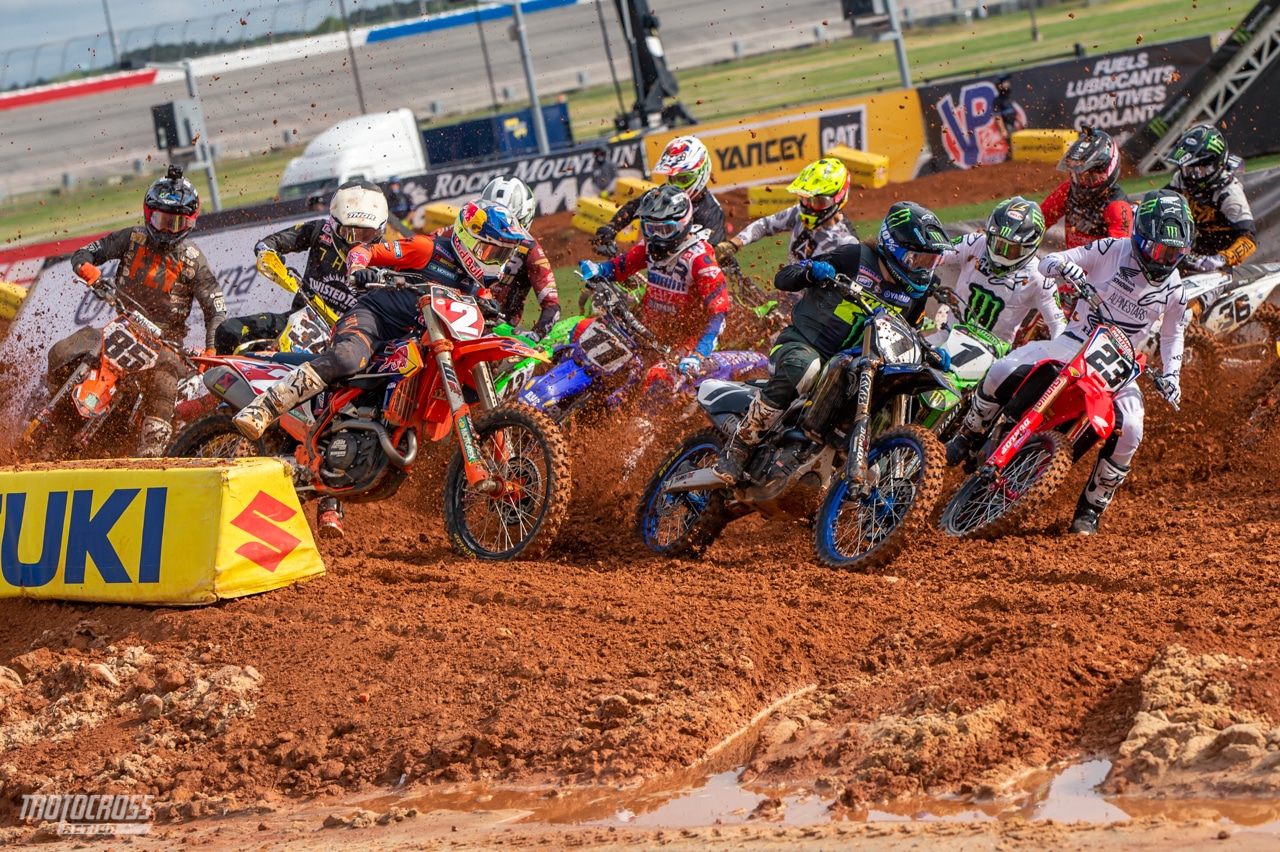 Round 13 of the 2021 Monster Energy Supercross season was an exciting one as the riders came back from their nice two weekend long break from racing and lined back up on the gate. The track was barraged with poor weather leading to a different track conditions each riding session, from dry and dusty at the beginning of qualifying to a soupy mess during the Heats. The track layout was also extremely interesting as it provided both very fast and technical sections throughout the entirety of the track. Looking ahead to round 14 of the 2021 Monster Energy Supercross season, the track layout is similar in style following almost the same route, but the rhythm is completely different. This time around the track will have a massive straight away that stretches from one side of the track all the way to the other, resembling a straight rhythm drag strip if it didn’t have a couple kinks in it. Luckily for the riders, there is no imminent weather on the radar that will turn this massive track into a massive undertaking so hopefully the ground can still a little bit drier than the round prior. Scroll down below to find out what is to be expected of the next outdoors-inspired Supercross track and round 14 of the 2021 Monster Energy Supercross season.

Epic in proportions and scale, will we see another rider like Eli Tomac, Chase Sexton, or even Aaron Plessinger take advantage of the motocross-inspired Supercross track? So far, the first rider to win at a residency (two or three races in-a-row at one location), has usually gone on to win each one.

The chances are, well, unlikely with how tough the competition is. But we’d like to think that if Atlanta 1 would have had the full 20 minute moto, it would have been a very close battle to the checkers between Eli Tomac and Chase Sexton. Now, this to not brush off Aaron’s amazing performance at the beginning of the Main Event either, as Aaron Plessinger led the race until making a mistake that cost him the lead. Jason Anderson also had an incredibly fast qualifying time but due to a poor start would only finish in fourth. Also, don’t forget about another impressive ride from Dylan Ferrandis. He would start in dead last, yet finish in fifth. There are a handful of competitors that would make the racing exciting to see them up front in the pack but either way, it is going to be tough to beat Eli after he’s won both of the outdoor speedway races already. So who do you think will grab the win on Tuesday? Will Eli show us his true strengths or will another competitor outside of the previous two race leaders, Chase Sexton and Aaron Plessinger join the fray?

THE CHAMPIONSHIP CLOCK IS TICKING FOR KEN ROCZEN 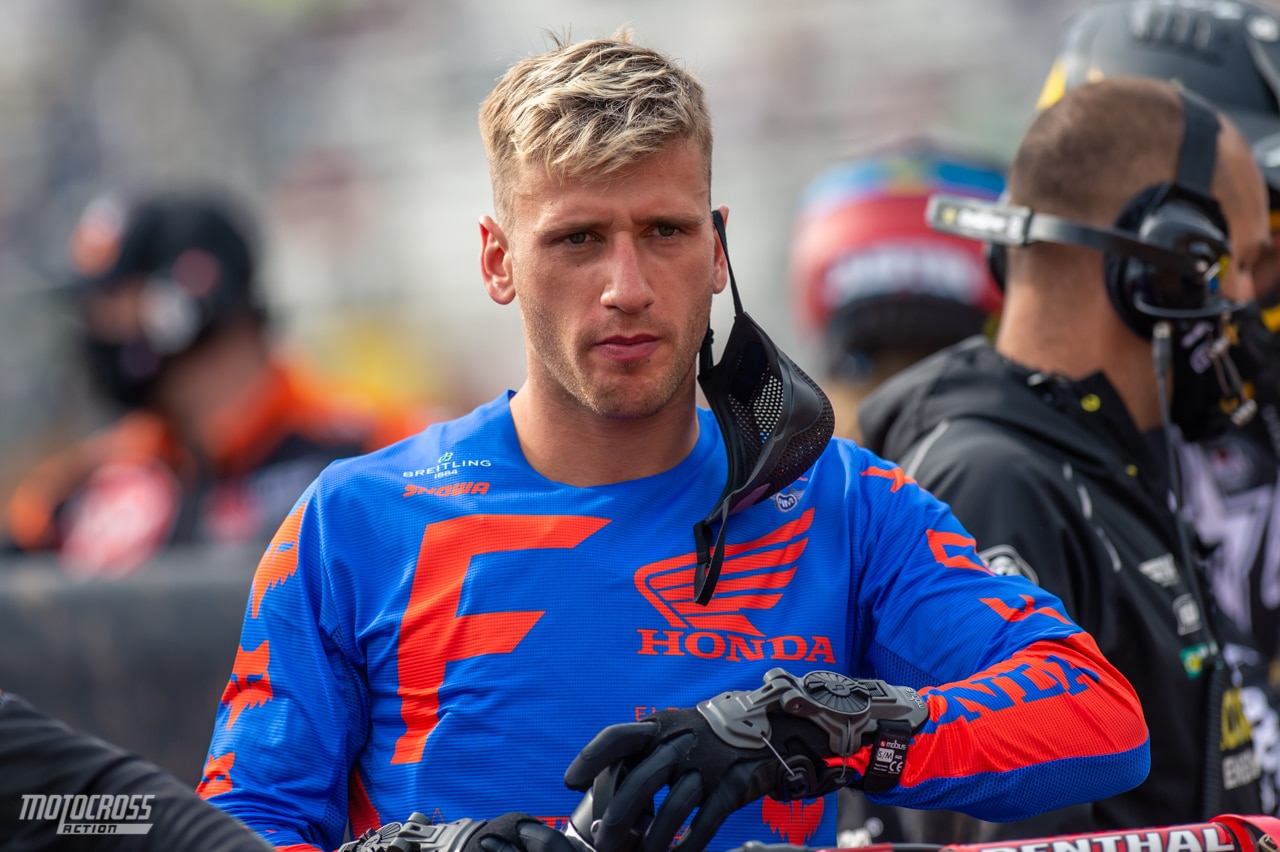 Time is running out for Ken Roczen to catch up to Cooper Webb’s lead.

When racing commenced again, we anticipated Ken Roczen to attack the Atlanta track and put on the last charge towards the championship. We weren’t expecting to see the 94 back in 20th place at the start of the 450 Main Event. His rival Cooper Webb on the other hand, got the start he needed, and knowing where his opponent sat in the race, even let Chase Sexton and Eli Tomac make the pass as he continued to grow his lead on the Honda rider. Ken now sits 22 points behind Cooper Webb and with only four races left in the season, Ken Roczen will have to pull a rabbit out of his hat or win some races in order to earn the 2021 championship title. If he doesn’t, we may see Eli Tomac come from the far left field and take away his second place position because now, Eli’s gap has shrunken to only 14 points behind. Two more Atlanta rounds may definitely pay off in the Colorado native’s favor.

WEATHER REPORT: THANKFULLY NO UMBRELLAS WILL BE INVOLVED, HOPEFULLY The weather on Tuesday is looking a lot more promising than that of the race prior.

The forecast tells us that on Tuesday, there will be a low chance of precipitation and luckily for the riders and everybody else, a lot higher chance of having dry clothes by the end of the motos. It will be slightly chilly in the early morning but as the day progresses, the sun will come out and warm up to a very nice 80 degrees. But if you are sitting from home, you’re probably already enjoying the comfort of your own couch and the room temperature air conditioning. Another upside for the track resembling a normal Supercross track rather than an ice rink means that we’ll see a lot more exciting racing. It’s hard to count just how many times the leader in one of the Heats or Main Events had their fate chosen by the track sending the unfortunate soul flying across the infield of Atlanta Motor Speedway. So, you can say we’re looking forward to seeing the bikes get some actual traction tomorrow. The NBC Sports Network TV broadcast will be shown at a three-hour delay. This isn’t a huge deal for people on the West Coast because they’ll be getting off work in time for the race to start. It’s worse for East Coasters who have to wait until 10:00pm for the races to start. If you want to watch it live, you’ll need Peacock Premium.

NBC SPORTS LIVE TV BROADCAST:
The racing will NOT be shown LIVE on NBCSN. It will be shown three hours later at 7:00 PM Pacific Time, 10:00 PM Eastern Time. If you want to watch it LIVE, you’ll need the peacock premium streaming app. See below: Cooper Webb may not have won Atlanta 2, but finishing in third increases the gap on his points rival Ken Roczen. The 94 finished all the way back ninth. Now, there is a smaller gap in points between Eli Tomac and Kenny than there is between Kenny and Cooper. Ken Roczen now has four races to make up 22 points.

250 WEST SUPERCROSS POINT STANDINGS (AFTER ROUND 6 of 9) Justin Cooper finished in second after having a scary get-off in his Heat Race. He also extended his two point lead to a four point lead. The 250 West Coast class has been nothing exciting this year as we’ve seen rookies top the podium for the first time.

THE BEST OF JODY’S BOX: THE EFFECTS OF SELECTIVE MEMORY ON A RACER’S EGO

REM RACE REPORT: EVER WISH YOU COULD GO BACK TO THE SADDLEBACK DAYS? THIS IS THE PLACE