The original 2021 Monster Energy Supercross schedule was released back in October and it forecasted a 17-round season, but it didn’t include the dates or locations for round 13 through 16. Now, the original schedule has been changed and the empty dates have been filled in. In 2021, Supercross will complete a full 17-round season in five different states and seven different venue. The series will stop in Texas, Indiana, Florida, Georgia and Utah. Texas and Florida will both host rounds at two different venues. Florida will feature one stop in Daytona and two stops at in Orlando and Texas will host races in Houston and Alrington. See below for the official schedule and for more information about the 2021 Supercross season: The 2021 season features double-headers, triple-headers and races on Tuesdays and Saturdays. Ken Roczen seems to have adapted well to his new 2021 Honda CRF450 this season.

Yes, fans will be allowed at a reduced capacity. Supercross has implemented enhanced health measures to help ensure the highest standards of wellness when it comes to today’s live experience. Seating capacity will be reduced at each stadium with a Pod Seating structure, which will allow family and friends to safely enjoy all the action while social distancing from other groups in attendance. More information about each stadium’s safety protocols can be found on their individual websites – NRG Stadium, Lucas Oil Stadium, AT&T Stadium.

Supercross was the first sport to complete its season and championship in a bubble environment in 2020 due to the pandemic. Bubbles are now widely popular and being used by the NBA, NHL, WNBA, and MLB to great success. The NFL was one of the first sports to welcome fans back to stadiums and Supercross is excited to follow their lead while also using some of their own bubble-environment tactics in the 2021 season by hosting multiple races in a single location.

One of the unexpected surprises of racing in the bubble in Salt Lake City was the creation of mid-week races due to the condensed nature of the schedule. Racing every Wednesday during the three-week stretch became a fan-favorite while also boosting television ratings in an otherwise non-traditional broadcast window for Supercross. With that in mind, Supercross will host four SuperTuesday races, one in each of the host cities – Houston, Indianapolis, Glendale, and Arlington, a first in the sport’s 48-year history.

Talking to Dave Prater of Feld Entertainment, we were able to confirm that extensive track changes will be made to adjust the tracks in between rounds at the double and triple header events. They said that they’ve gotten comfortable with changing the tracks over just a few short days and they plan to change the track even more drastically than they did at Salt Lake City during the 2020 season. Daytona is back for 2021 and, so far, it is the only race that will not be a double or triple header. 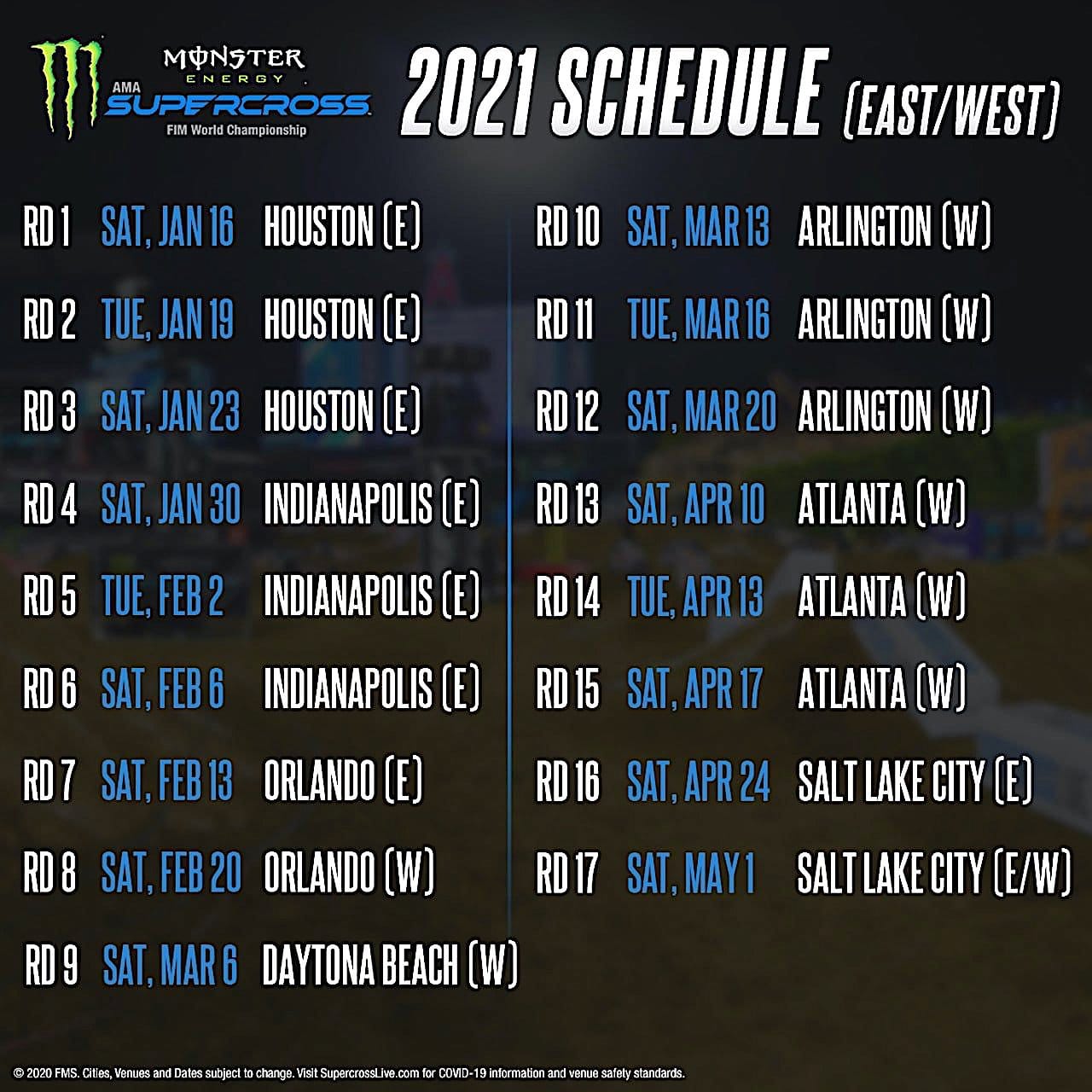 Cut this out and paste it on your fridge.