2021 SUPERCROSS SEASON POINT STANDINGS AFTER ROUND 11

The 2021 Arlington Supercross 2 has just finished up and it turned out to be another exciting Tuesday night of racing. The second of three Rounds in Arlington, Texas, featured a fairly hard packed and slick track. In the 450 Main Event, it was Cooper Webb who couldn’t be stopped. Usually Cooper comes through the pack and battles for the win late in the race, kind of like Eli Tomac. This time, both Cooper and Eli were up front on the start in first and second, and Ken Roczen was right there in third. Surprisingly, Ken Roczen wasn’t able to keep up with the first two and Cooper Webb was able to shake off Eli Tomac in the later stages of the race. There was some drama in the 450 class with Jason Anderson accelerating big time going around the whoops, he would later be docked one position; moving him from seventh to eighth place. Also, in the 450 LCQ we saw another penalty with Brandon Hartranft and Cade Clason battling for the final transfer spot. Cade pushed Hartranft off the track, without making contact, only blocking his line, and then Brandon went around the jump and got back on the track in front of Clason and scored the final transfer spot. Luckily, the AMA caught it fairly quickly and corrected it, allowing Clason to race while Hartranft had to wait until Saturday.

But, the big news came from the 250 Main Event. Once again we saw lots of carnage and, surprisingly, we saw the fourth new winner of the season at the fourth race of the 250 West series and it was the third “first time winner” in a row. Hunter Lawrence, older brother to the young star Jett Lawrence, was able to grab his first win and somehow the Championship points lead after Justin Cooper went down early in the race and finished fifth, and Cameron McAdoo went down in the whoops and then got penalized for cutting the track instead of getting back on the track where he crashed. Cameron’s penalty moved him from 7th place to 10th place in the 250 Main and handed the points lead to Hunter Lawrence.

*250 Update: Cameron McAdoo was penalized three positions (from 7th to 10th) in 250 Main Event for cutting the track. Hunter Lawrence is the new 250 West Points leader

*450 Update: Jason Anderson was docked one position for cutting the track. Cooper Webb won the Main Event, extending his lead on Ken Roczen in the points chase.

Cooper Webb grabbed the holeshot and would be untouchable throughout the entire race. The only one who got close was Eli Tomac through the whoops section. However, right before the whoops, Eli would slide the rear end of his bike out, almost crash, and lose touch with Webb. Ken Roczen ran with the two leaders through the beginning of the race but ran out of steam a little before halfway. Webb now has won two Mains in Arlington, with a potential third on the horizon this Saturday. Can Cooper go 3 for 3 in Arlington? We will have to wait and see. 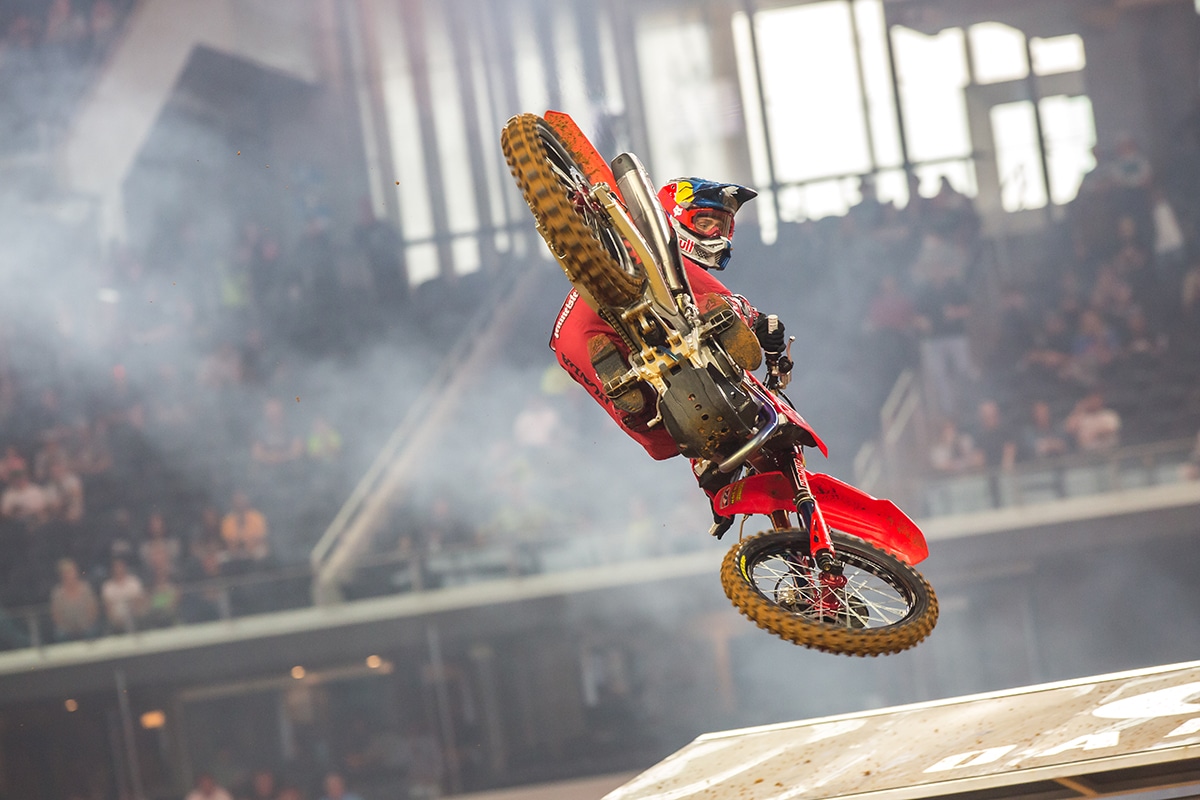 Ken Roczen went from 7- to 12-points back in one race. Hopefully he can get some momentum back and tighten up the points on Saturday at Arlington 3.

250 WEST COAST SUPERCROSS POINTS AFTER ROUND 4 of 9 Hunter Lawrence wins his first 250 Main Event and takes over the points lead after Cameron McAdoo is docked three positions.

In Arlington 2, it would be Mitchell Harrison that grabbed the holeshot, and with him, a levy of riders that we have not seen in the front very often. Jalek Swoll, Kyle Peters, and Hunter Lawrence charged in second through fourth while the points leaders were back in the pack. The top five would flip back and forth, letting Hunter Lawrence eventually make a double pass on both Jalek Swoll and Mitchell Harrison. It was Hunter’s night as he took the lead and ran away with it, finishing almost four seconds ahead of the rest of the 250s. Cameron McAdoo had a get-off, however, would rejoin onto the course, skipping a turn and a portion of the track. Justin Cooper salvaged a huge amount of points after getting a terrible start finishing in fifth. However, Hunter Lawrence’s victory bump him to second in points and then, after the AMA reviewed Cameron McAdoo’s course cutting incident, they docked him three positions and bumped Hunter to the points lead. Cameron and Justin’s gap narrows as Justin salvaged a handful of points at Arlington 2.