The tripleheader held at AT&T Stadium is finally over as the riders and teams finish off their residency and get prepared for the Atlanta rounds. Heading into the twelfth round, we noticed that the track was around the typical length of a normal Supercross track with normal rhythm sections. However, there were a few riders that discovered several jump opportunities that could possibly be time savers. In qualifying, Justin Cooper was once again the fastest qualifier amongst the West 250s. Ken Roczen was the fastest qualifier in the premier class, riding almost half a second faster than second place.

In the first Heat Race for the 250s, Jarrett Frye would grab the holeshot avoiding a massive pileup between Mitchell Harrison, Jordon Smith, and Garrett Marchbanks. However, it was Cameron McAdoo who would get by the Star Yamaha rider and win the first Heat Race. In the second Heat Race, Justin Cooper grabbed the holeshot and would lead the entirety of the race, taking the win. For the 450 class, it was Justin Barcia who grabbed the holeshot but not for long as Eli Tomac would make the pass a few laps later, winning the race. In the second 450 Heat, Cooper Webb grabbed the holeshot with teammates Ken Roczen and Chase Sexton just behind. Ken made the pass on Cooper through one of the rhythm sections with Chase following the 94 on the last lap, knocking over Cooper Webb in the process. Everything turned up on high as the Main Event gate dropped and the racing took off. Scroll down below to find out what happened and where everyone sits in the points hunt. It was insanely close between Ken Roczen and Cooper Webb.

It was Ken Roczen who took the lead in the 450 Main Event and would lead the entirety of the race until about 6 laps remaining. Cooper Webb would put the heat on high, making passing attempts on Ken Roczen and eventually, squeezing by the rival. The two went back and forth but Ken’s small mistakes would let Cooper get the win. In the Main, both Eli Tomac and Justin Barcia went back and forth but it was Eli who made it past the checkers first. Now Cooper leads the points chase by 15 points. If Ken wants to get back in the points lead, he only has 5 races left. Ken Roczen only has five races to regain the points lead.

250 WEST COAST SUPERCROSS POINTS AFTER ROUND 5 of 9 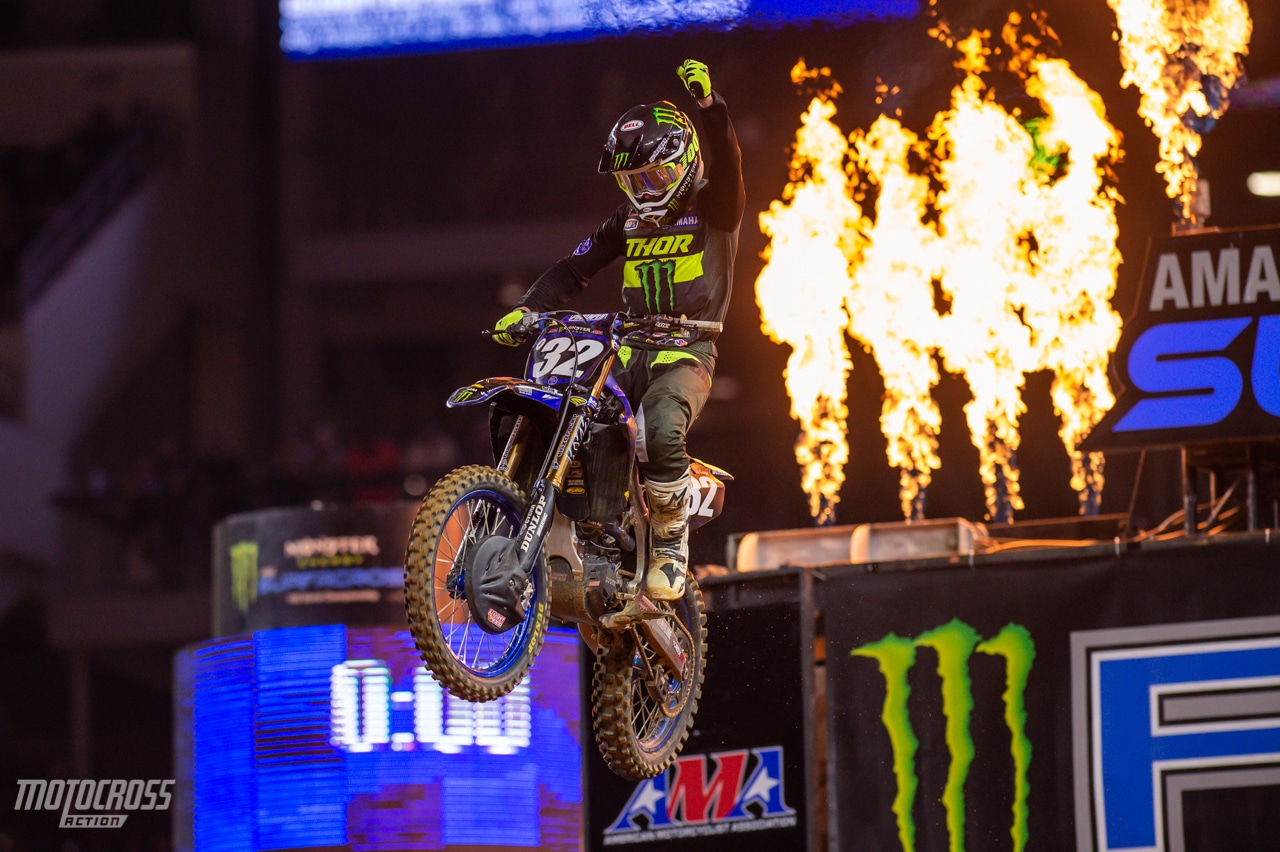 Justin Cooper now leads the 250s by only two points.

It was Justin Cooper who finally grabbed the holeshot and lead the entirety of the race. Coty Schock got a great start but Cameron McAdoo and Hunter Lawrence made the pass shortly after. Unfortunately for Coty, he who hit the rear end of Seth Hammaker, falling over and sit at the back of the pack. Not much happened in the race except for Garrett Marchbanks sliding off the track and making up several positions in the race. Hunter Lawrence flew off the side of the track and into one of the safety nets. Thankfully for Hunter, his position in the race would play in his favor as he got back up and only dropped down to fifth place. Justin Cooper would win the race and points lead, leading the pack by two points over Cameron McAdoo. Cameron McAdoo now only sits a couple of points behind the leader.