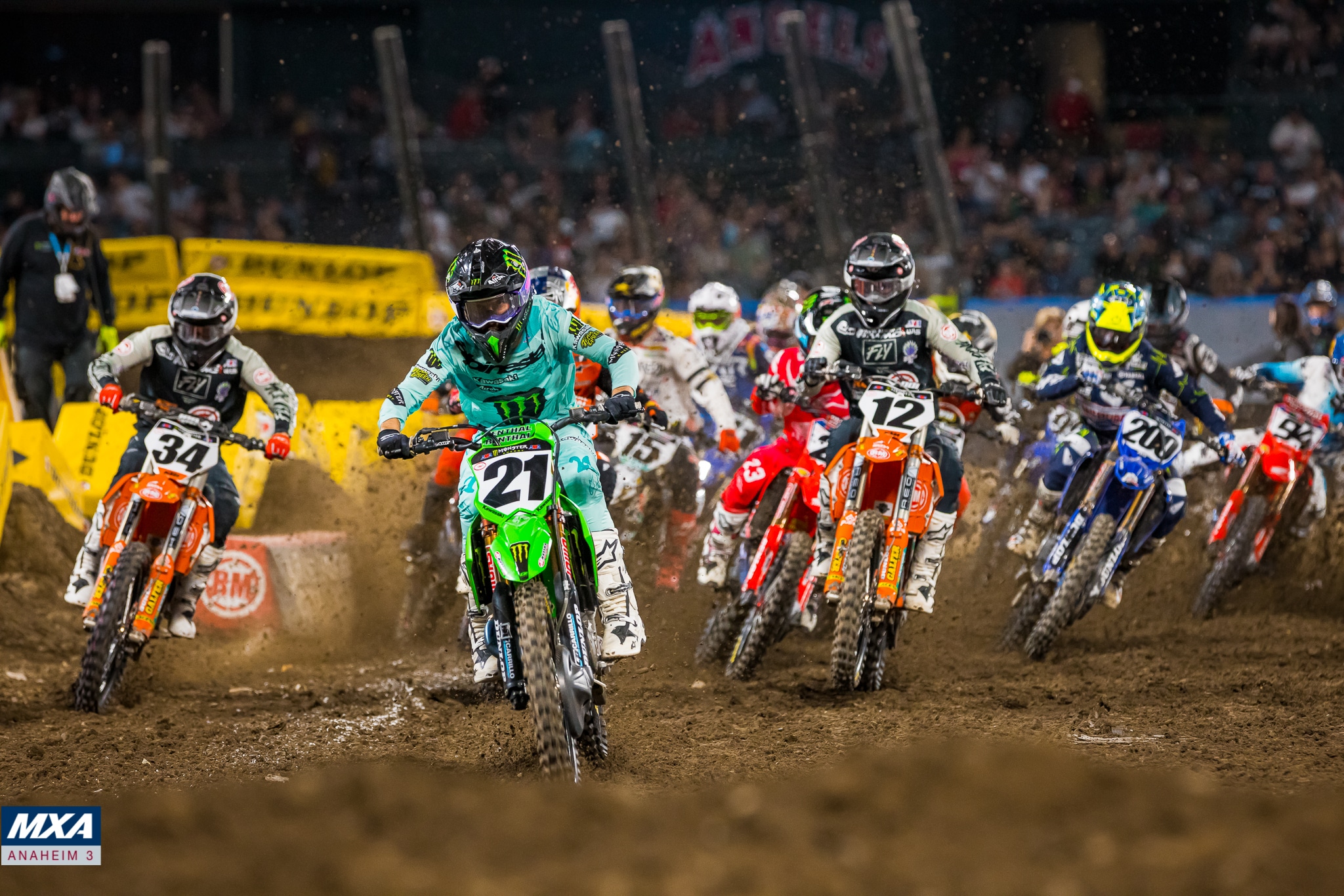 The Anaheim 3 Supercross is the sixth Round of the 2022 Supercross season and coming into A3 it’s Eli Tomac with the momentum and an 11-point lead. However, Chase Sexton has three podiums in a row (one of them being a win at San Diego) and he is hungry to get another win and close the points gap. Jason Anderson is third in the point standings with Malcolm Stewart, Justin Barcia, Cooper Webb, Ken Roczen and Marvin Musquin behind him in points.

Unfortunately, the Anaheim 3 Supercross is not on LIVE TV, the race will be aired on CNBC Sunday morning (2/12) at 9:00 A.M. pacific time. However, the race is LIVE on the Peacock Premium online streaming service for just $4.99 per month. Jason Anderson wins his second 450 Main Event of the season!

Jason Anderson and Eli Tomac, two of the fastest riders thus far in 2022, got out front early and began to pull away from the pack. Marvin Musquin was up front early in third, but about halfway into the race, he ran into lapped rider Cade Clason in the sand section and went down, losing four positions to Barcia, Stewart, Ferrandis and Sexton. This put Marvin in front of Cooper Webb and Aaron Plessinger, his teammates. Both Aaron and Cooper lost a lot of time to the front runners and it seemed like they were losing the most time in the whoop sections. Earlier in the race, Tomac made a brief pass on Anderson, but Jason was able to get back by him right away and towards the end of the moto, Jason had a 2.5-second lead. Justin Brayton was riding smoothly in 10th and was actually pressuring Plessinger and Webb. Then, Marvin Musquin got by Chase Sexton to take over sixth. Where was Ken Roczen? He had issues on the start and was dead last. He was in 11th with two laps left. 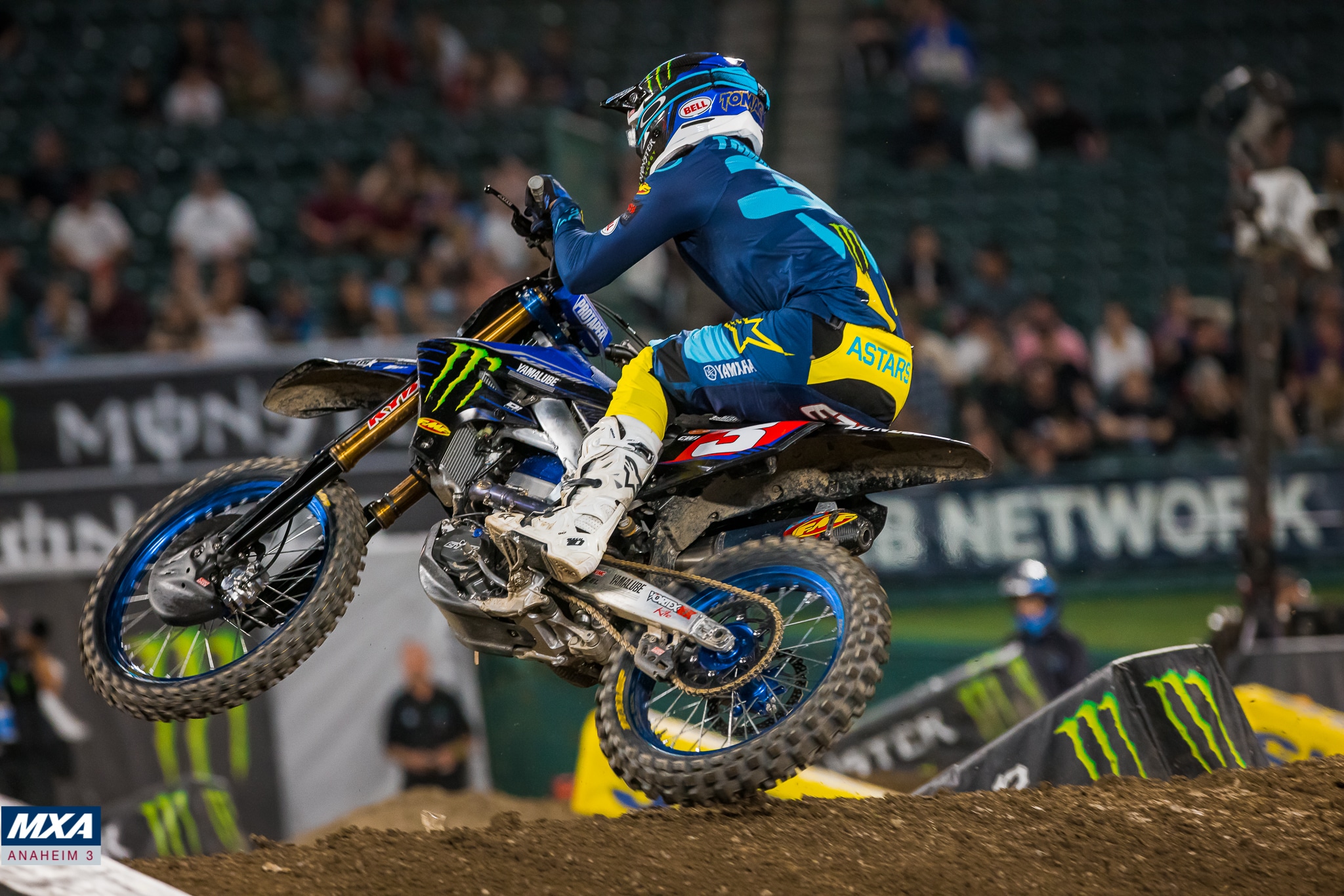 Eli Tomac secures second place an a 12-point lead over Anderson who moved to second in points. 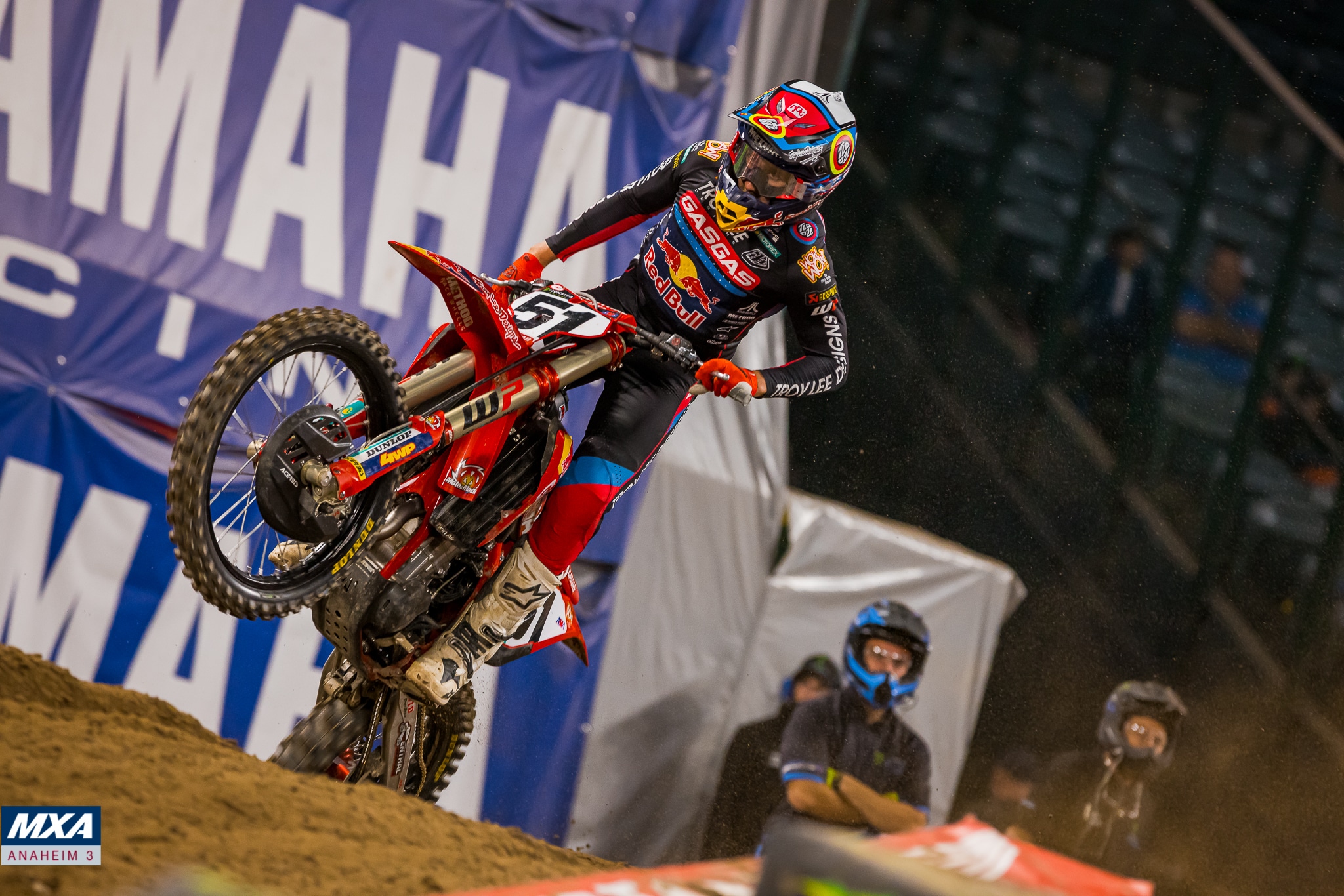 Justin Barcia earns his second podium of the season. He’s other podium was at Oakland. 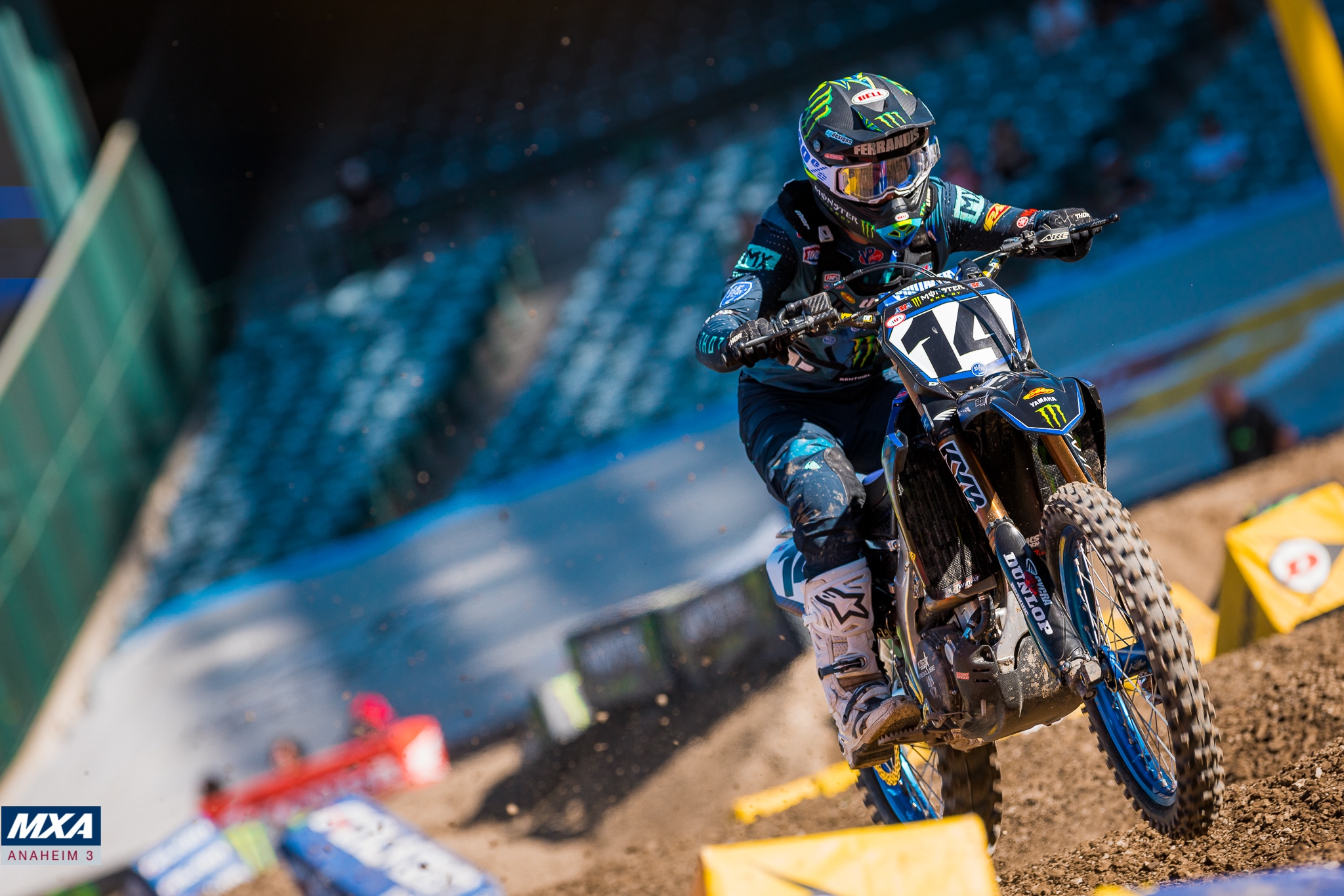 Freddie Noren grabbed the holeshot in the 450 LCQ, but it was Dylan Ferrandis who quickly made the pass in the first whoop section. Freddie got passed by Dean Wilson and Kevin Moranz, but then he got back by Moranz. Then, Adam Enticknap and Ryan Breece both passed Moranz. Finally, on the last lap, Freddie Noren was holding third place with Enticknap and Breece charging hard, battling behind him for the final transfer. Freddie then made a mistake before the whoops and lost his momentum. This allowed Enticknap and Breece to catch him at the end of the whoops. Then, Freddie crashed hard and his bike took out Ryan Breece. This allowed Moranz to get into fourth, but he was passed by Joan Cros on the last lap. Then, with two turns to go, Moranz ran into Cros mid-corner, hit him off the track, and took the final transfer position. 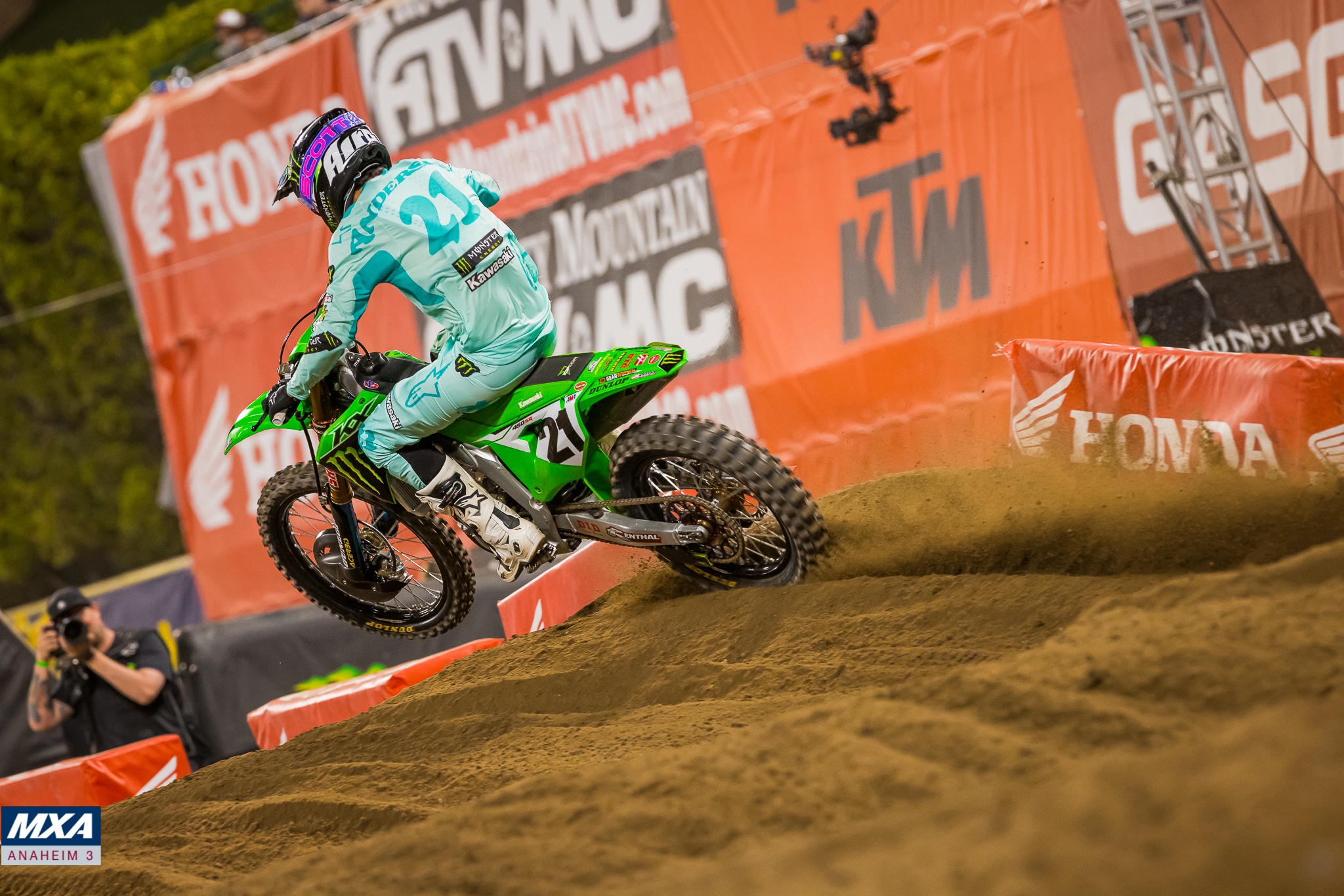 Jason Anderson got out front early with Shane McElrath second. Chase Sexton was able to get by Shane while Malcolm Stewart was buried in the pack, making lots of passes in the whoop section. Eventually, Malcolm caught Ken Roczen and passed him. He got beside the Honda rider in the rhythm section after the whoops and then beat him to the inside of the sand turn to take fifth place away. In the end, it was Jason Anderson who won 450 Heat two. Aaron Plessinger finished second, Chase Sexton third and Shan McElrath was fourth. 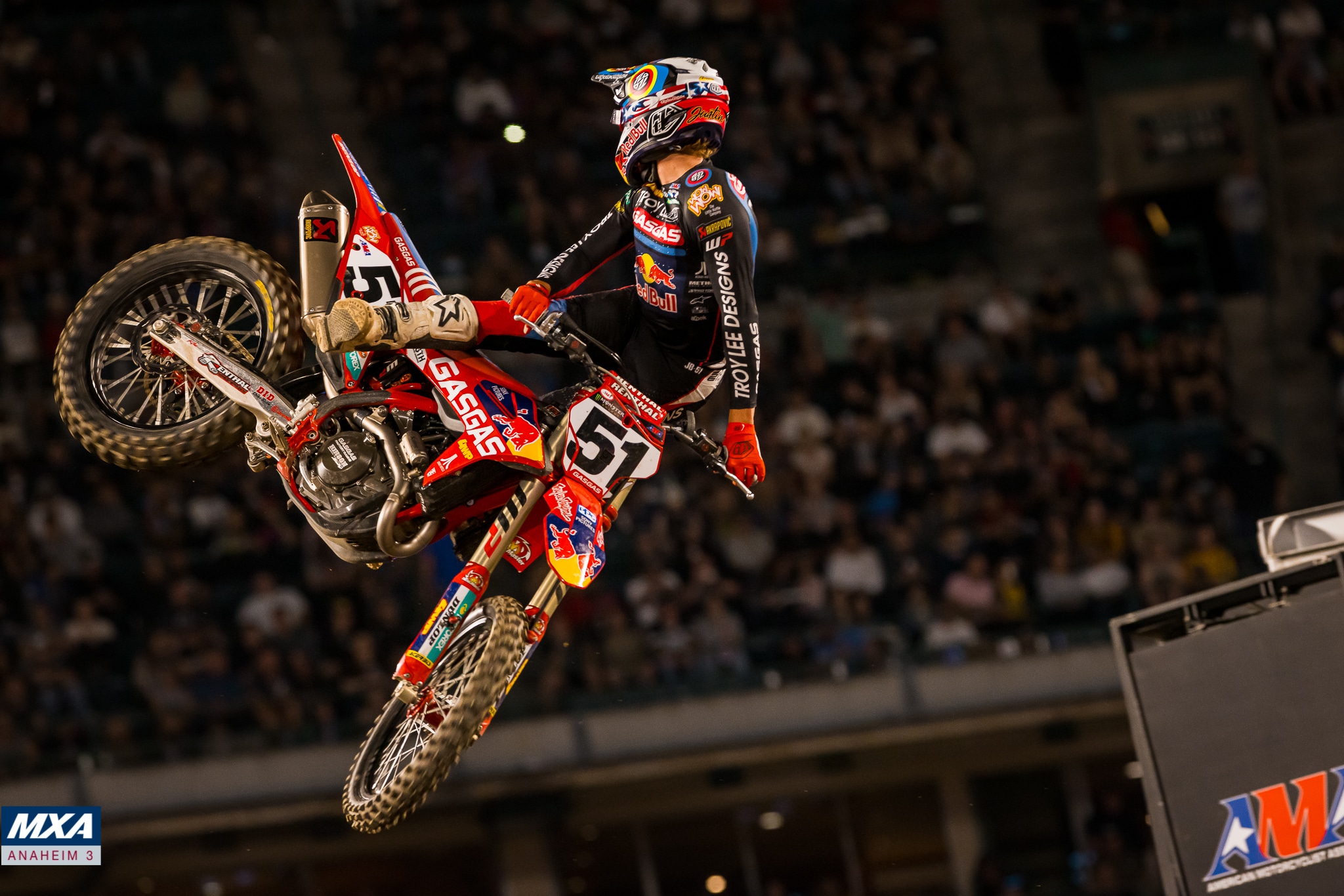 Justin Brayton got out front early in 450SX Heat race #1 and unfortunately, Dylan Ferrandis had a big crash in the first turn that kept him on the ground for a few seconds, but he rejoined the race. Justin Barcia got around Brayton on lap two and went on to win his first Heat race of the season. Cooper Webb was passed by Tomac in the whoops, then it seemed like Tomac almost let Cooper by in the next straight away as Webb dived to the inside. Then, on the next lap, Eli Tomac made the same pass on Webb in the whoops, almost like he was taunting him. 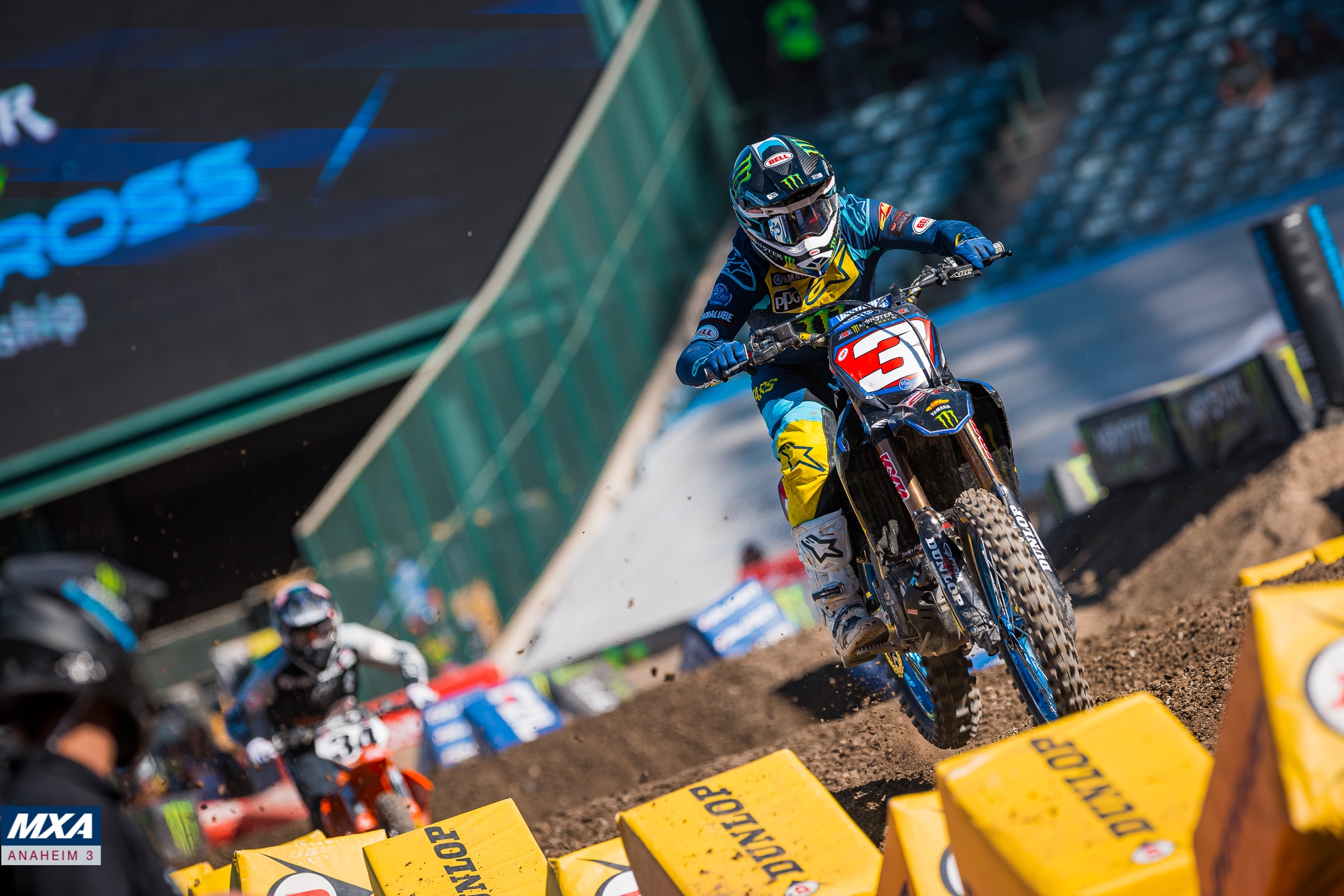 Eli Tomac was third in his Heat race.

WATCH THE 2022 ATLANTA SUPERCROSS: BOTH CLASSES & ALL…