The Monster Energy Cup is one of the most unique Supercross events of the year and it always provides for an interesting and exciting night of racing. So far Adam Cianciarulo has impressed us in his 450 Supercross debut when he qualified second overall in timed-qualifying behind his teammate Eli Tomac. The track tonight will feature three different layouts for the 450 Cup class riders, plus a joker lane, two sand sections and more. To learn more about the 2019 Monster Energy Cup click the link below. 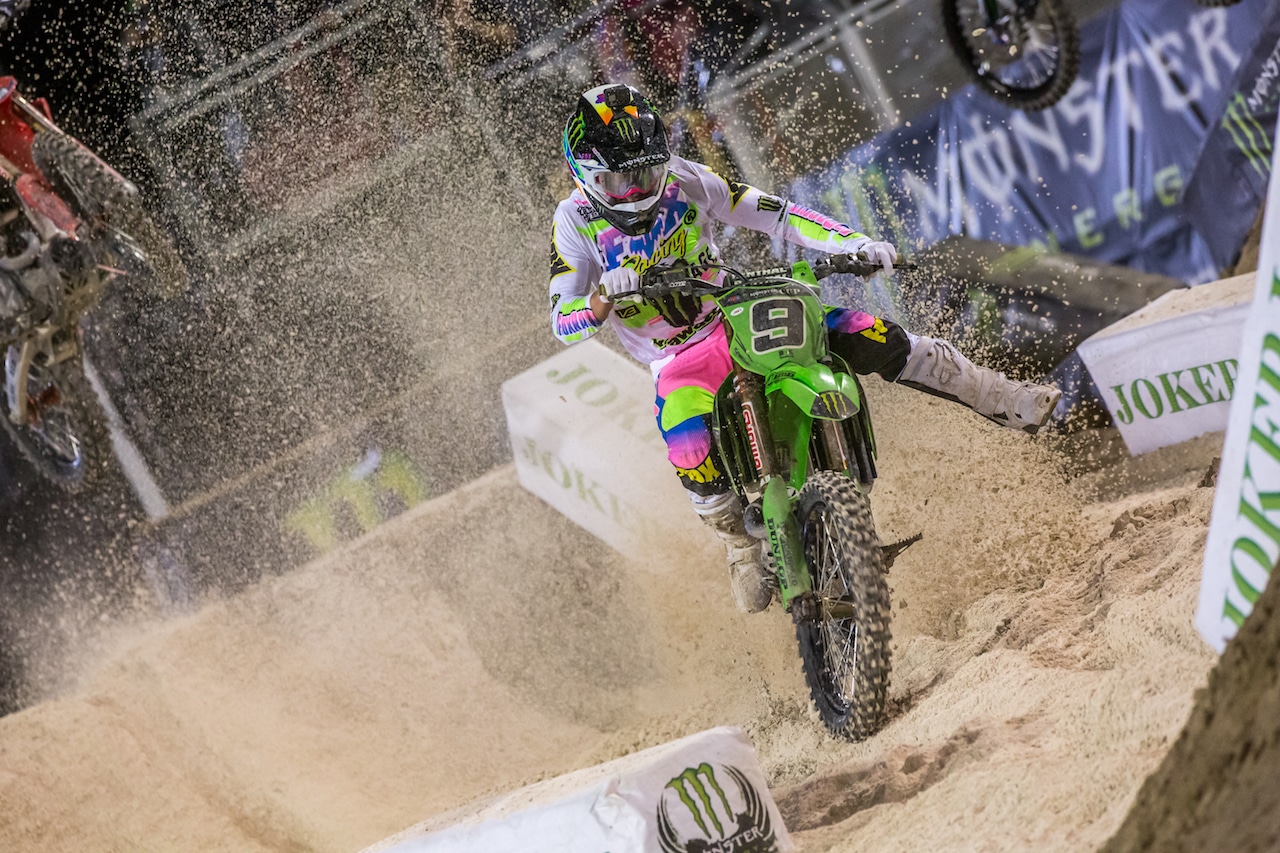 Adam Cianciarulo wins Main Event #3 and the overall and $100,000 at the Monster Cup in his 450 Supercross debut!

Adam Cianciarulo started right next to his teammate Eli Tomac in the third Main Event. Going into the third Main Event Adam was tied with Eli Tomac and Malcolm Stewart in points for the overall win. Adam grabbed the holeshot and the early lead while Eli Tomac found himself in third behind Tim Gajser. Adam made a big mistake on the opening lap going over the finish line and he had to single single while Tim and Eli almost landed on him. But Adam was able to maintain the lead. Adam held off Eli for the entire race, although Eli was pressuring him hard to make the pass. With two laps to go Eli took the joker lane, hoping to make up time on Adam and pass him, but Cianciarulo would not be denied. He hit the joker lane on the final lap and came out just in front of Eli. He held on for the final few corners to take the win at his first ever 450 Supercross. The second Main Event of the night started off similar to the first, Jeremy Martin had the holeshot but it was Vince Friese who made the quick pass in turn number two to grab the lead. Adam Cianciarulo was buried back in the pack and Eli Tomac was around the five spot early. Eli caught fire early in the race and made his way up to second place, but a small mistake would cause Eli to high side after landing off the roller single outside of the stadium. Eli went down hard, but he got up quickly and seemed to be uninjured. He was around the ten spot when he re-entered the track and his million dollar winning chances were slim. Malcolm Stewart would pass his teammate Vince Friese to grab the lead and eventually take the win. Adam Cianciarulo made his way around Jeremy Martin and Vince Friese to grab second and Eli Tomac took the joker lane a few laps before the finish hoping that it would help him pass Justin Barcia, Vince Friese, Tim Gajser and Jeremy Martin. Well it worked out for him and while they were stuck in the joker lane on the last lap, Eli was able to sneak back into third. Going into the final Main Event Eli Tomac, Malcolm Stewart and Adam Cianciarulo are tied for the overall win. Eli Tomac wins the first main event of the night.

The first Main Event at the Monster Cup was a very exciting one! 450 rookie, Adam Cianciaulo grabbed the holeshot and the early lead with Jeremy Martin in second. Adam led for a brief moment until he tucked his front end in a slick corner and dropped back to fourth. Eli Tomac had a mid-pack start but he made passes quick to get to the front. After Adam’s crash Vince Friese led for a few laps with his Smartop Bull Frog Spas MotoConcept Honda teammate Malcolm Stewart was close behind. Aaron Plessinger was right behind Jeremy Martin and Tim Gajser when he landed in a soft spot in the sand. The bike whipped him around and he’s sore, but he will be back for the next race. After a few laps of battle Eli Tomac was able to get to the front and Adam Cianciarulo found his way passed Friese and Stewart to finish second right behind his teammate. Eli Tomac is now the only rider in contention for the one-million dollar prize. Malcolm Stewart has competed recently at the Montreal Supercross when he finished second behind Dean Wilson. But the Monster Cup will be Malcolm’s first race stateside since his crash earlier this year at the Glendale Supercross.

HEAR WHAT CIANCIARULO, TOMAC AND STEWART HAVE TO SAY POST-RACE