The 2020 Loretta Lynn Pro Motocross National #2 is in the books and coming into it, riders like Eli Tomac, Jason Anderson, Marvin Msuquin, Adam Cianciarulo, Justin Barcia, Chase Sexton and more were looking forward to a second chance at racing on the famous Loretta Lynn track to get some redemption at round two of the 2020 AMA Pro Motocross season and overtake Zach Osborne in the point standings. Surprisingly, there was drama before the gate even dropped for Moto 1. Headlining the qualifying sessions were the issues that current 450 class points leader, Zach Osborne suffered at the beginning of the only 450 Group A Qualifying session of the day. Hot off his first win at the season opener, Zach Osborne’s bike wouldn’t start when it was time to fire it up for the practice. Luckily, the AMA allowed Zach to ride in the Group B practice session and his team was able to fix the bike just in time for it. Zach was still late to the practice, but he managed to lay down a fast lap and score 10th gate pick for the first moto today. In other news, Hurricane Mills, Tennessee, experienced heavy rain over the last few days which created muddy conditions for the riders to deal with. Luckily, the track crew was able to manage the weather in the best way possible. The track was muddy for qualifying, but not too bad. Unfortunately, rain before the motos began made it even tougher for the riders. See below for the 450 results the the Loretta Lynn National #2. Marvin Musquin grabbed the holeshot with Max Anstie and Adam Cianciarulo right behind him. The rider from Great Britain, Max Anstie, took the lead from Musquin and led the first lap of his second ever AMA National. Eli Tomac was taken out by his teammate Adam Cianciarulo on the start and he had his work cut out for him. Somehow, after only 9-minutes of racing Eli Tomac made his way to 8th place. Cianciarulo was third until Zach Osborne passed him with 15-minutes to go. Then, 3-minutes later, Osborne’s teammate Jason Anderson was able to get around Cianicarulo as well. Meanwhile, Max Anstie continued to lead on his H.E.P. Suzuki. Eli Tomac was up to 6th behind his teammate and Christian Craig was behind him. With 7-minutes to go, Zach Osborne passed Marvin Musquin to inherit second place while Eli Tomac made a mistake and was passed by Craig and Savatgy. With 2-minutes plus 2-laps to go, Max Anstie got stuck behind another rider that went down and Zach Osborne made the pass on him to take over the lead. With two laps to go, Eli Tomac once again had bike issues as he came to a stop while Max Anstie kept pressure on Osborne for the win. On the last lap, Marvin Musquin actually passed Max Anstie and almost passed Osborne in the final stretch of the race. He finished second in the race and earned second overall behind Osborne who went 5-1 for his second win in a row. 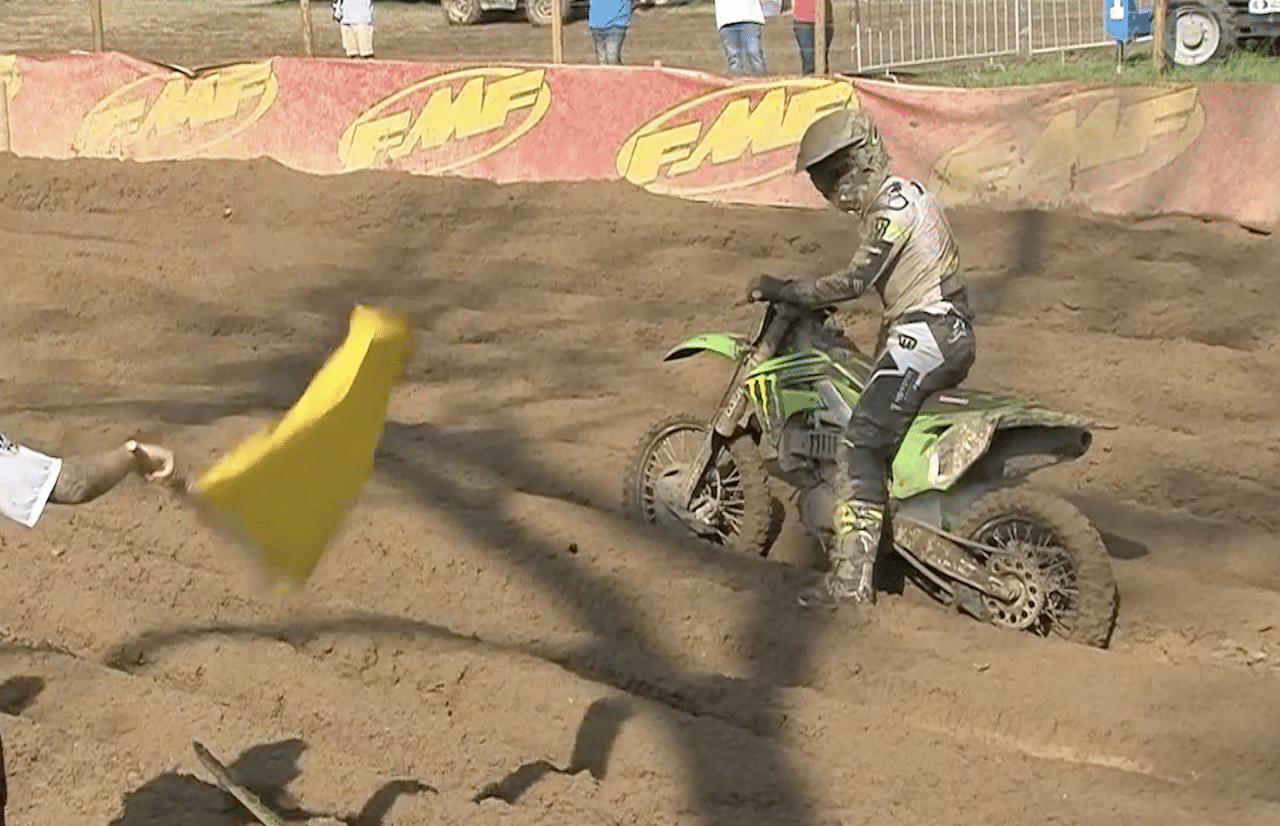 Marvin Musquin came from seemingly nowhere to pressure Zach Osborne for the win at the finish line. He would finish second in the moto and third overall. Max Anstie led for a majority of the race, but ended in third after Osborne and Musquin got around him. Justin Barcia grabbed the holeshot and won the first 450 moto.

Justin Barcia grabbed the holeshot with Freddie Noren and Chase Sexton behind him. With mud flying everywhere, Chase actually stopped in the middle of a rut in the third turn to pull a tear off and a few riders got around him. Justin was the only rider with a clean track while Freddie Noren was riding strong and stuck with Barcia for the first three laps until he went down in the Ten Commandments. Freddie was able to get up and rejoin the race in 7th place. Eli Tomac battled his was through to pass Sexton and Broc Tickle to get himself into second. With 18-minutes left to go, Eli Tomac was second, but he was already 28-seconds behind Barcia. Jason Anderson went down on the start and was running in 14th as we get closer to the halfway point.

With 15-minutes to go, Justin Barcia extended his lead to 30-seconds while Christian Craig was gaining ground on Eli Tomac for the third position. Tickle was 4th, Musquin 5th, Sexton 6th, Noren 7th, Cianciarulo 8th and Jake Masterpool was 9th. Then, Chase Sexton went down while at the same time Freddie Noren passed Marvin Musquin and Sexton to get into 5th. With just over 5-minutes to go, Christian Craig went down and dropped to 6th which moved Tickle and Noren to 3rd and 4th. With two laps to go, Eli Tomac went down and dropped to 5th while Jake Masterpool and Zach Osborne moved to 6th and 7th. Justin Barcia went on to win the moto, while Eli Tomac’s bike failed him on the last lap and although he didn’t finish the race, he still scored 9th in the moto since Justin Barcia lapped all the way to 10th place. Eli Tomac’s bike failed him on the last lap. Luckily, with Justin Barcia lapping all the way to 10th place, Eli was still able to finish 9th place in moto 1.