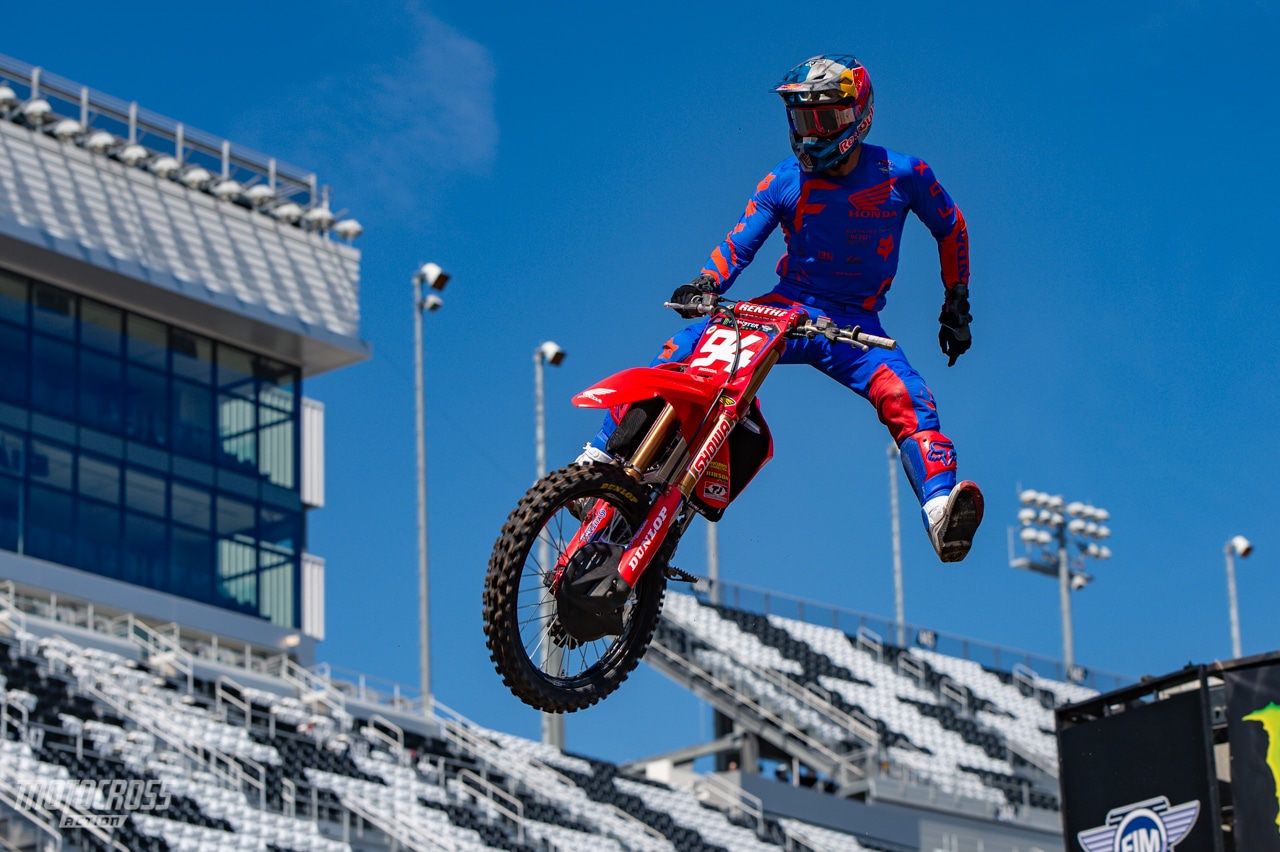 The 2021 Monster Energy Supercross season lands in Daytona International Speedway for the ninth round in the series. Heading into the weekend, the weather was nearly perfect the day before for Press Day. The morning of race day, not so much. Similar to Orlando, the track was plagued with rain, except the racecourse has yet to see the light of the sun. It is difficult to say whether or not the rain will make a return for the racing but for now, the teams prepped the bikes for the worst of conditions. Scroll down below to find out who are the fastest riders in Daytona and follow Motocross Action as we report LIVE from Daytona International Speedway with all the race coverage. 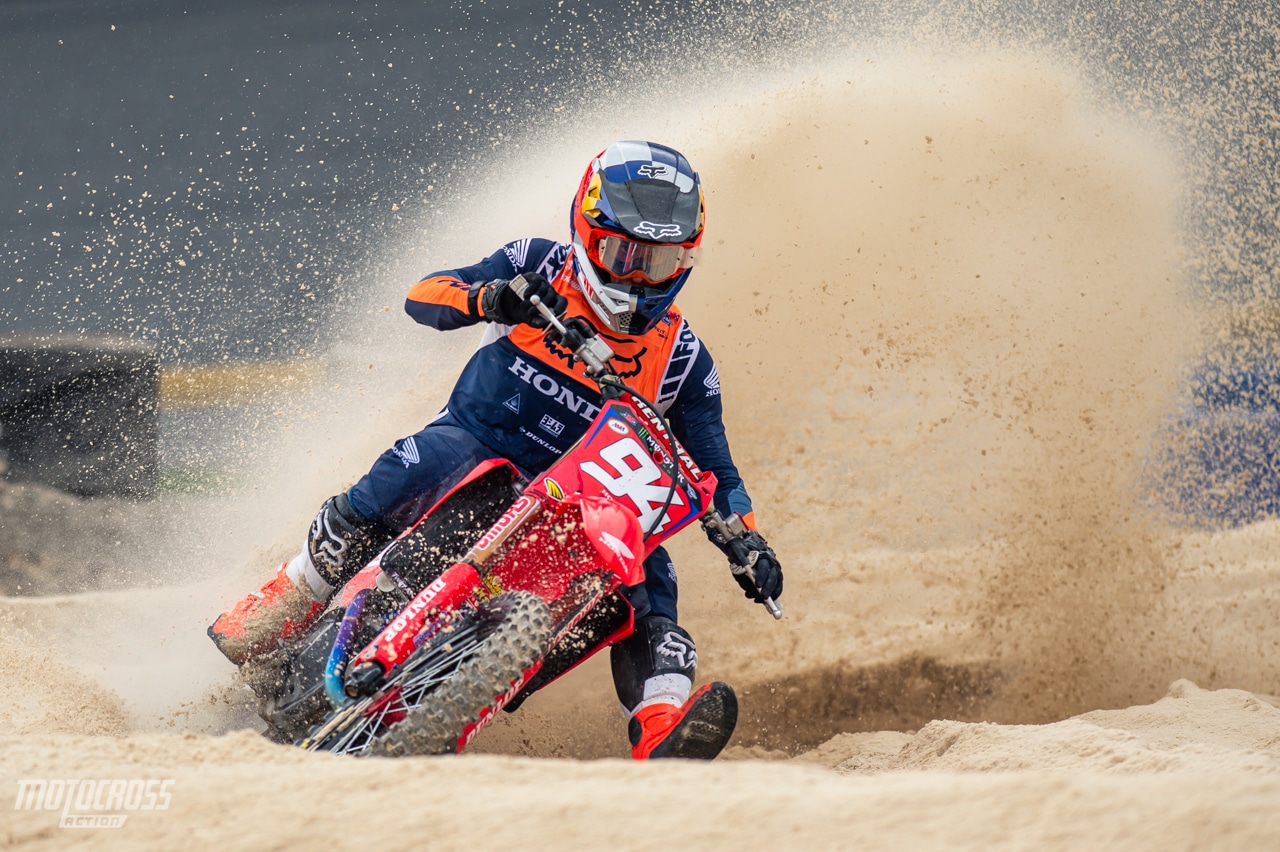 Ken Roczen did not hesitate to get upfront in the second qualifying session. The 94 jumped to the front of the premier class to get some fresh air and set a very fast lap time. Marvin Musquin looked very fast in the first qualifying session and proved to be very fast again in the second session by jumping up to second just behind Ken Roczen. Dylan Ferrandis ran in third followed by Aaron Plessinger and Chase Sexton in fourth and fifth. Dylan Ferrandis squeezed past Marvin Musquin for the second place position. Jason Anderson moved up into fifth place, passing Eli Tomac but a few laps later, Eli took his spot back. Eli put down a fast lap, putting the number 1 in third place. Only two seconds separated first and 20th. Ken set the fastest lap time of the day.

TOP 40 MOVE ON TO THE RACES Eli Tomac set the fastest lap time in the first qualifying session but Ken Roczen stole the thunder in the second session. 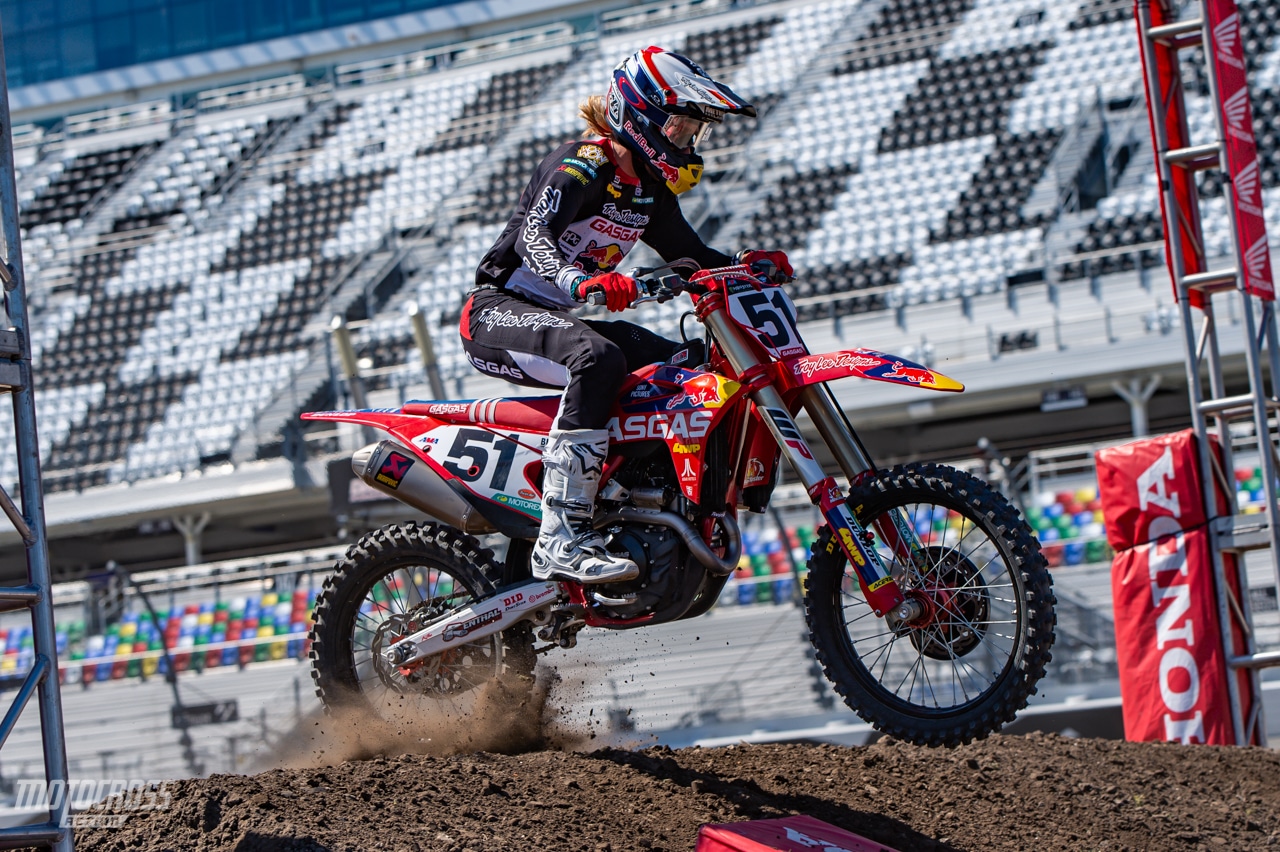 Justin slamming the brakes on the wall jump. Hopefully, we see someone send it into the next single.

Right at the beginning of qualifying, Justin Barcia slid out in the grass and proceeded to make his way to the mechanics to get a quick alignment on the front end. Marvin Musquin set the fastest lap time but didn’t hold onto it for long until Eli Tomac snuck past. Malcolm Stweart ran in third place followed by Justin Bogle and Dylan Ferrandis. The rain drizzled but one thing the riders weren’t prepared for was a huge gust of wind that approached the stadium. Ken Roczen moved up into third place just passing Malcolm Stewart. From first to 20th, the pack was separated by six seconds. The drizzle became heavier and the riders proceeded to burn through their tear-offs. Riders headed into the mechanic’s area to get fresh sets of goggles. Eli Tomac held onto the fastest lap time followed by Dylan Ferrandis and Marvin Musquin. The KTM RedBull helmets are always kitted out with some amazing paint. Which one do you like more?