The 2023 San Diego Supercross is set to go inside of the brand new SnapDragon Stadium, just a few miles north of downtown San Diego, California. If you know you’re Supercross history, you might remember the now demolished Qualcomm Stadium which was erected in 1967 and was demolished in December of 2020. Supercross raced in the Qualcomm Stadium a total of 31 times (from 1980-2014) before the series moved it’s San Diego venue downtown to Petco Park for the 2015 through 2022 seasons. Now, the brand new SnapDragon stadium is ready to host Supercross and it’s actually located on the other end of the parking lot from where Qualcomm previously sat. The 2023 race marks the 40th time that Supercross races in San Diego and coming into today, it’s Eli Tomac with the red plate and points lead after winning Round 1 at Anaheim.

Scroll below to see the qualifying results, presented by FXR Racing, from the 450 class at San Diego as they are updated throughout the day. Malcolm Stewart scores the fastest qualifying time in the 450 class.

The riders did a practice start to get into the second 450 qualifying session and Jason Anderson was up front, but the way the turn is laid out, it rises over the backside of a berm and then drops the riders straight into a rhythm section. Jason slid out going up the berm and caused him and Cooper Webb to brake and go to the back of the pack. The good thing about practice starts during qualifying is that it gets the riders prepared for the night show so hopefully they won’t make the same mistakes.

The track was much faster for the second qualifying session after the Dirt Wurx crew groomed it between sessions. Cooper Webb sat quickest with 1:30 left on the clock, but everyone else was still charging hard. It was Chase Sexton, with just over 1-minute to go, who knocked Webb off the top spot. Then, with less than a minute to go, it was Malcolm Stewart who put in a heater lap, catching Eli Tomac, to get the fastest time of the day! 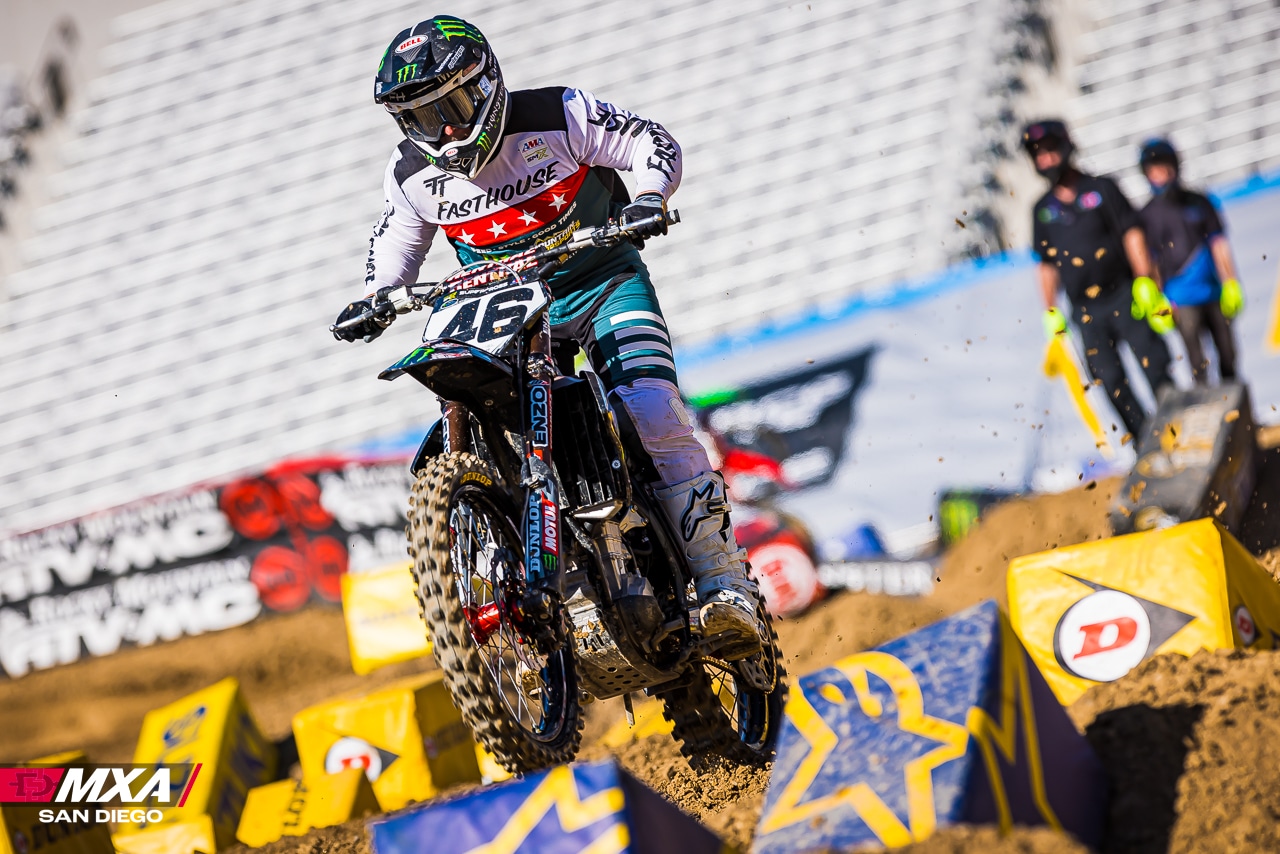 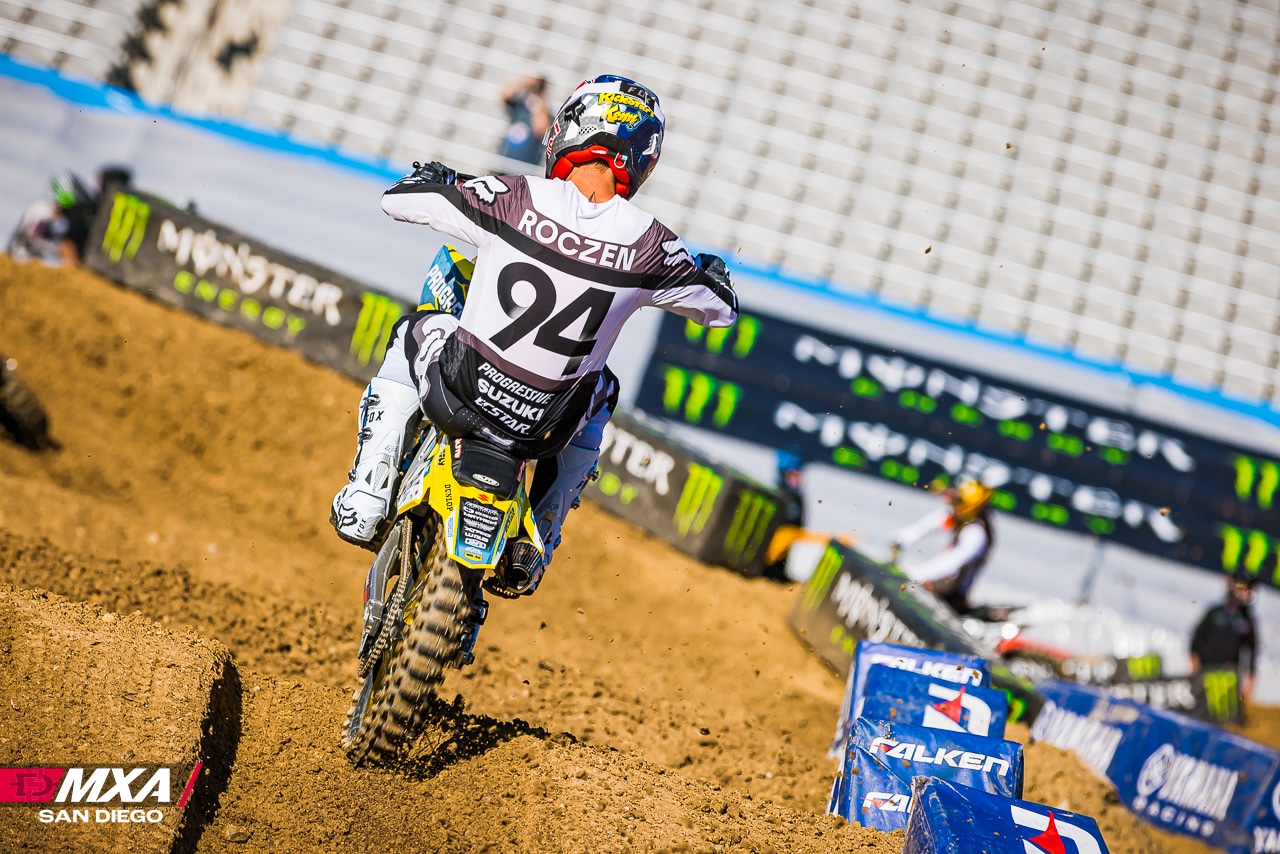 Ken Roczen goes into the night show ninth fastest. He was 1-second off Malcolm Stewart. 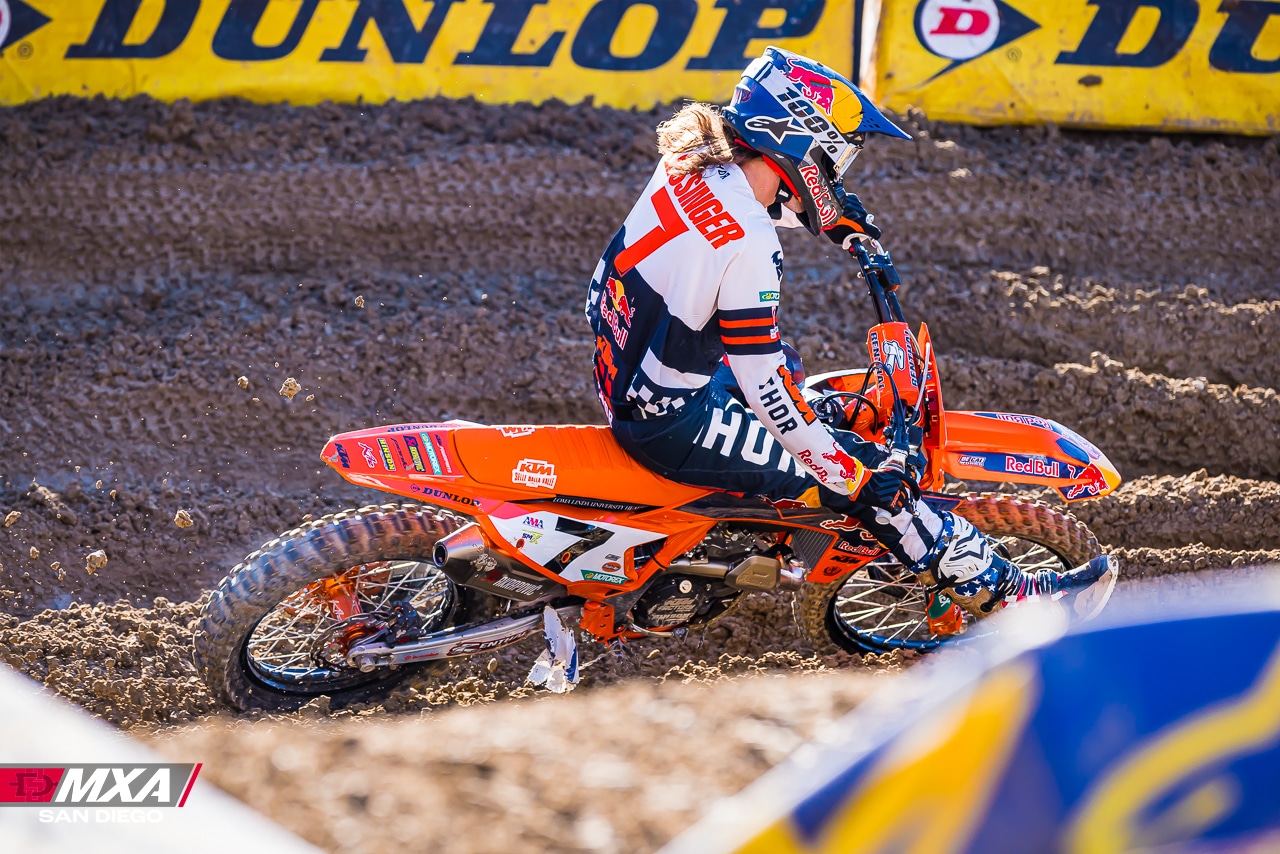 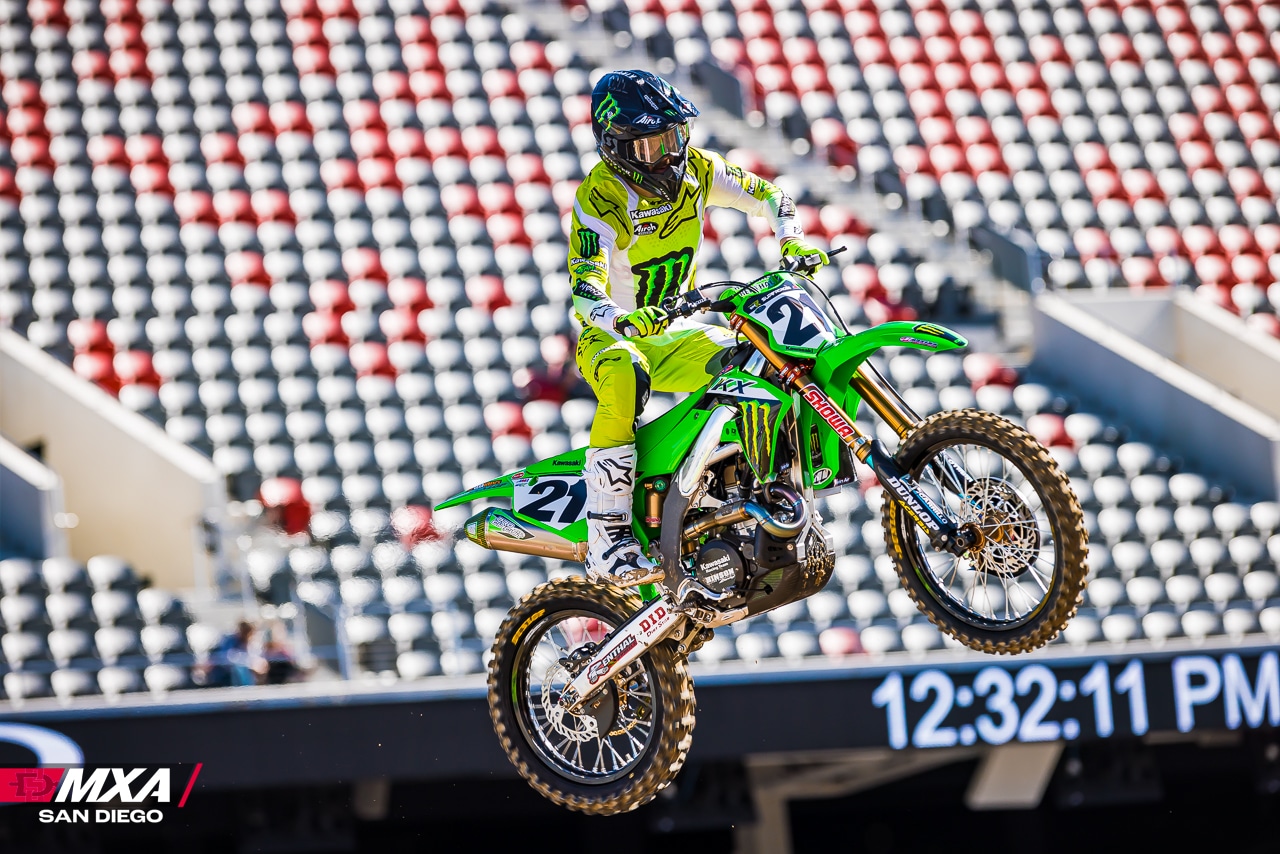 Jason Anderson was the fastest rider in the first 450 qualifying session.

The 2023 San Diego Supercross wasn’t an easy track build for the Dirt Wurx crew. It started out wet and muddy inside of the Snapdragon Stadium early in the week and they worked hard to build a dry race track for FELD Entertainment. They also decided to cancel press day to give the track more time to “air out.” Now, the conditions look great, the traction is plentiful and there are ruts in each turn, which makes for a challenging and technical track.

With 5-mins on the clock, Cooper Webb laid down a heater lap, moving to the top of the leaderboard. Ken Roczen has been testing different suspension settings this past week, going between factory Showa and Factory Connection-built suspension. He sat 9th quickest with 3-mins left. Aaron Plessinger was lucky to ride away from a sketchy incident on the north end of the stadium when he landed on a tough block and both Dean Wilson and Joey Savatgy made mistakes in the same rhythm lane. 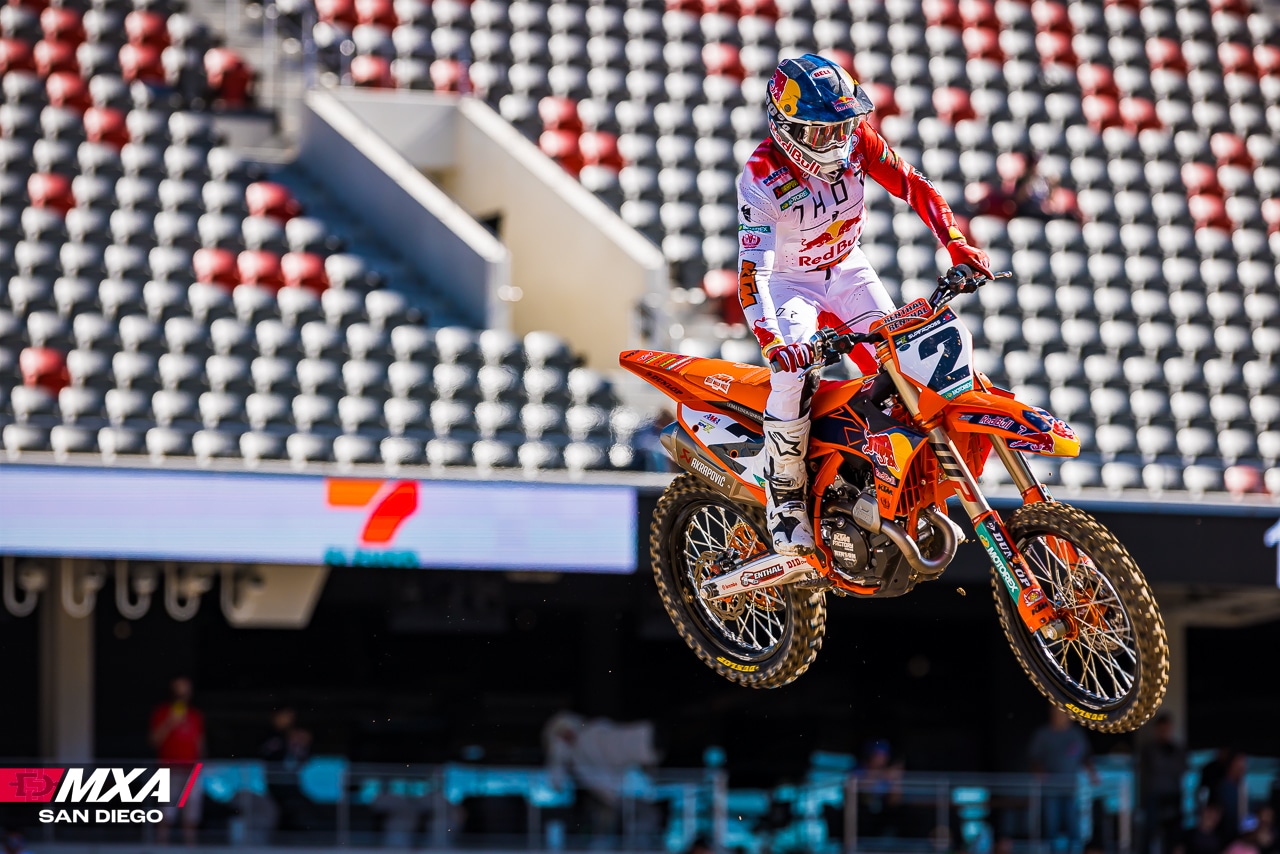 Cooper Webb looks sharp and motivated today at San Diego. He was charging hard in the first qualifying session. Eli Tomac is also looking spunky on the bike today. It’s going to be hard to beat him tonight. 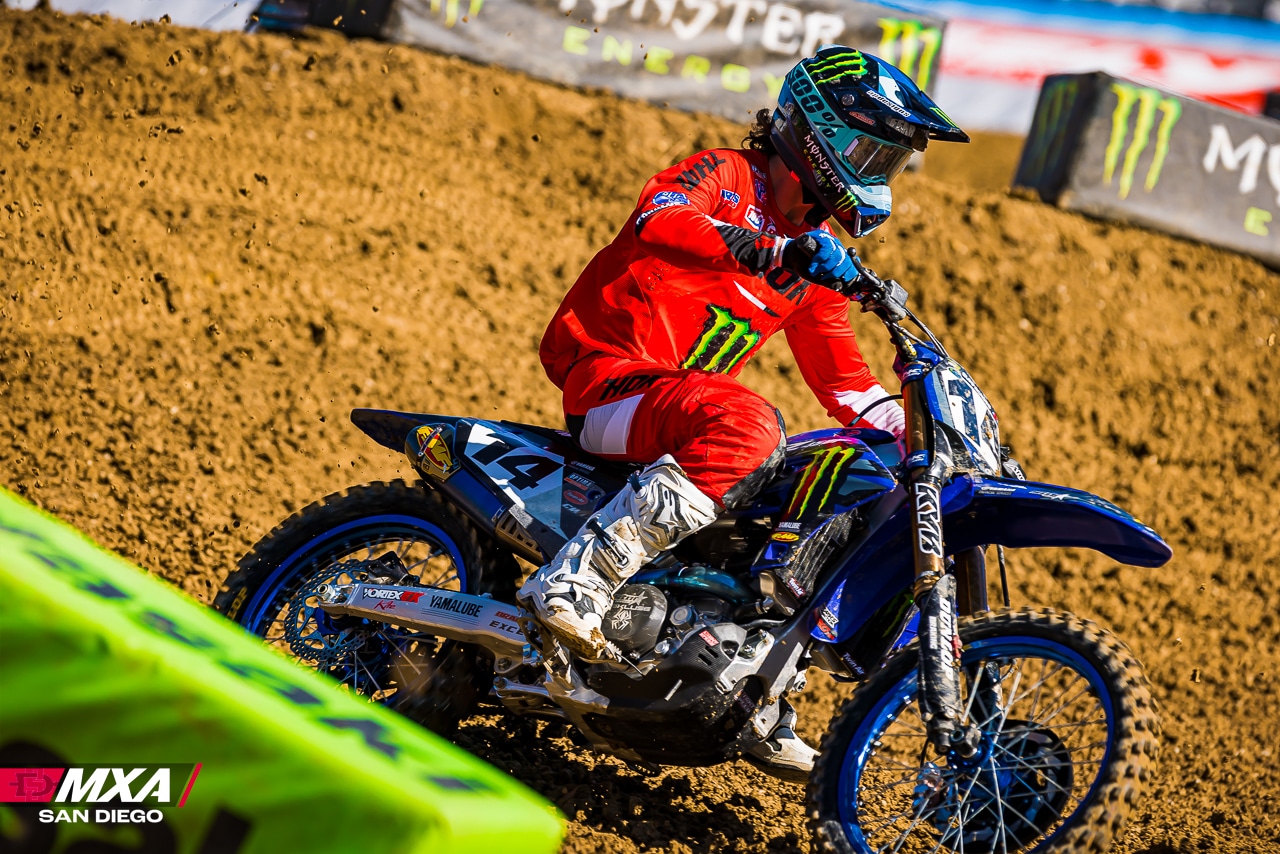 Dylan Ferrandis finished fourth in the Anaheim 1 Main Event and he was fourth quickest in the first qualifying session. 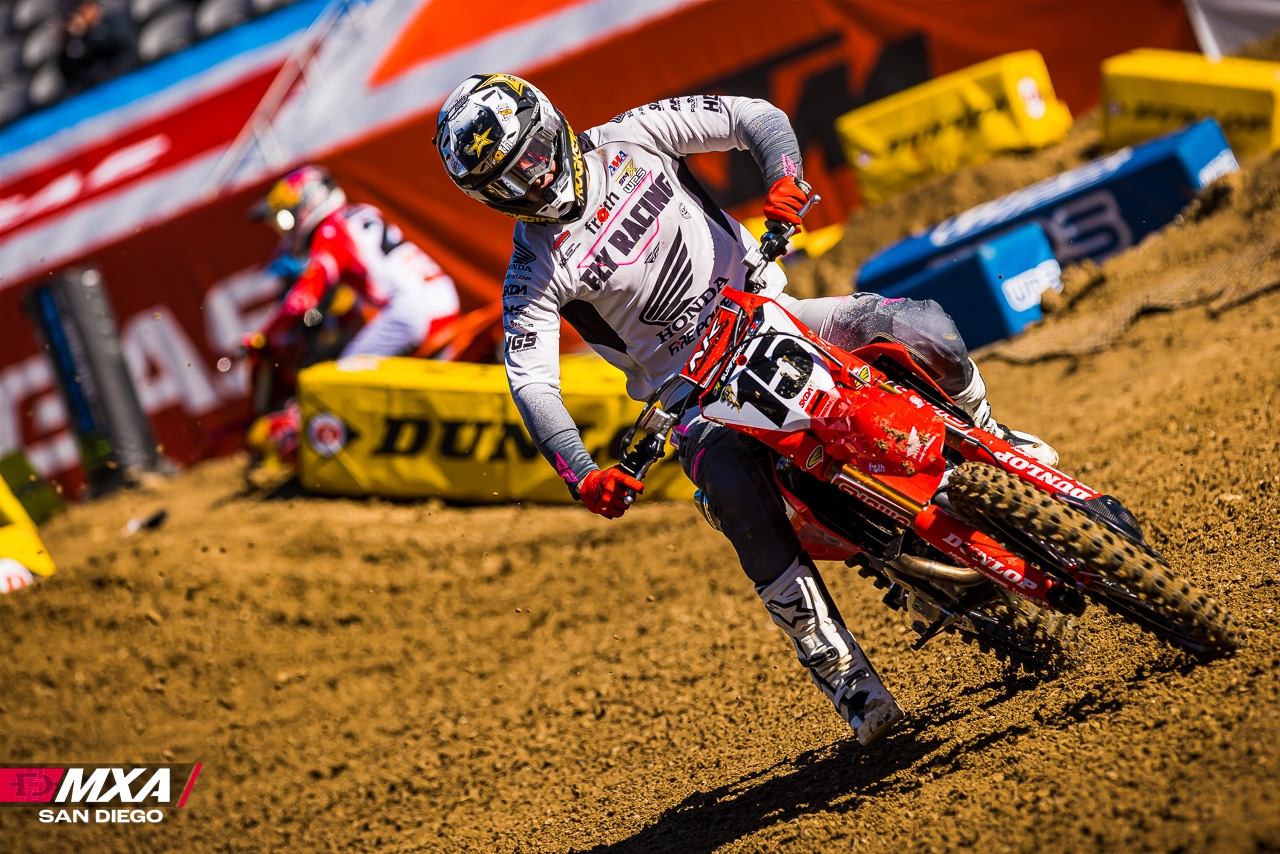 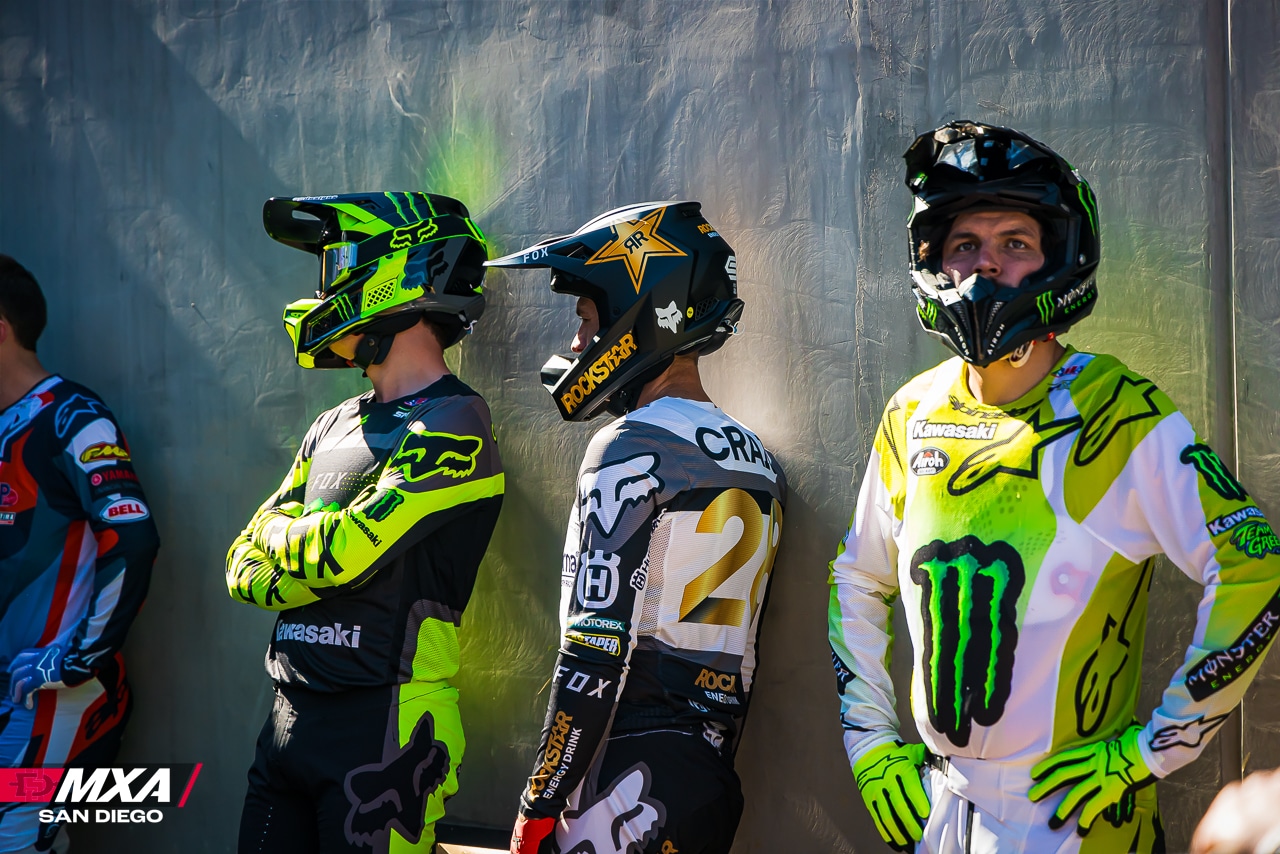 Jason Anderson, Christian Craig and Adam Cianciarulo waiting for their turn to ride.