The premier class stayed in Florida for the ninth round of the 2021 Monster Energy Supercross season. The riders got a week off before battling once again and many took the opportunity to freshen up their motocross skills at their local facilities before making their way to Daytona International Speedway. Riders like Jason Anderson, the Star Yamaha team, and many more spent a whole week training on sandy moto tracks just for this one race. However, their training would pay off in the long run as more Daytona-styled courses are on the 2021 circuit. The three rounds held at Atlanta Motor Speedway will be longer in length and feature Motocross-inspired sections. With qualifying wrapped up, we saw Ken Roczen at the top of the leaderboard being chased by Dylan Ferrandis and Eli Tomac. Will this finally be the year we see the German rider win a Daytona Main Event after getting incredibly close the year prior? Scroll down below to find out as we report LIVE from Daytona International Speedway bringing you all the coverage from the races. The premier class walked to the Main Event with only second separating the fastest qualifier, Ken Roczen, from the last place qualifier.

The Main Event for the premier class took and Eli Tomac took the holeshot with Cooper Webb and Aaron Plessinger just behind. Cooper saw the opportunity to drive Ken all the way to the edge of the track in the second turn and took it, pushing Ken to seventh. In fourth sat Chase Sexton with Marvin Musquin and Malcolm Stewart in fourth and fifth. Soon Ken made the pass on Malcolm and was right behind Marvin Musquin. Ken made the pass on Marvin a turn after the finish line and put the charge on the leaders. Ken then sat behind Chase in fifth place and a couple turns later, would make the pass on his teammate. Aaron was not backing down in third place as he nearly made the pass on Cooper Webb and made the pass through the sand for second place. The crowd roared as we saw the number 7 perform the best we have ever seen of him in the 450 class. Eli remained in control of the race and the lead grew to three seconds. In sixth place, Justin Barcia began to make progress on Chase Sexton. Malcolm Stewart made the pass on Marvin Musquin for fifth place with eleven minutes remaining. Jason Anderson also made the pass on Chase Sexton. With nine minutes remaining, Ken knew where Cooper’s strengths lie and proceeded to make passing attempts. It seemed like Aaron was the only one holding onto Eli as Aaron still sat three seconds behind the leader while Cooper and Ken both sat more than ten seconds behind. Malcolm joined the party in the battle for third with five minutes remaining. Ken made a mistake casing the jump before the finish, giving the position to Malcolm Stewart. Ken eventually made the pass on Malcolm with a minute in a half remaining. The leaders were deep into lap traffic and Cooper started to gain on Aaron Plessinger. Cooper made the pass on Aaron and Eli would win the race for his fifth time. Eli Tomac won for the fifth time in Daytona. Marvin Musquin and the rest of the top 5 qualified insanely close.

Ken Roczen grabbed the holeshot followed by Mitchell Oldenburg and Malcolm Stewart. In the sand section, a few mistakes occurred between Mitchell Oldenburg and Shane McElrath. No one was hurt and they continue racing. Eli Tomac then moved into third place with Marvin Musquin on his tail. The sand section became incredibly deep and technical as the 450s navigated the large ruts that formed. Malcolm Stewart held onto Ken’s pace as he raced in second. Jason Anderson tipped over in the grass after the start but had already made his way back to tenth place and eventually into the transfer position. A medical flag flew after the whoops section with a rider down on the side of the track, appearing to be Austin Politelli. Ken Roczen would win the second Heat Race. Dylan was an absolute animal in the 250 class during the 2020 outdoors season. Will his riding style pay off on the moto-themed Supercross track?

Cooper Webb grabbed the holeshot. Justin Barcia wasn’t playing games in this Heat Race as he made a rough pass on both Chase Sexton and Aaron Plessinger. Cooper Webb led the race with Justin Barcia and Aaron Plessinger following close behind. Aaron made the pass on Justin through the long sand straight away and started to pull away from the GasGas rider. Chase Sexton sat in fourth place being followed by SmartTop Bullfrogs Spas riders Vince Friese and Broc Tickle. Aaron made significant ground on the leader, Cooper Webb but when the checkers flew, Cooper Webb would remain in first place. 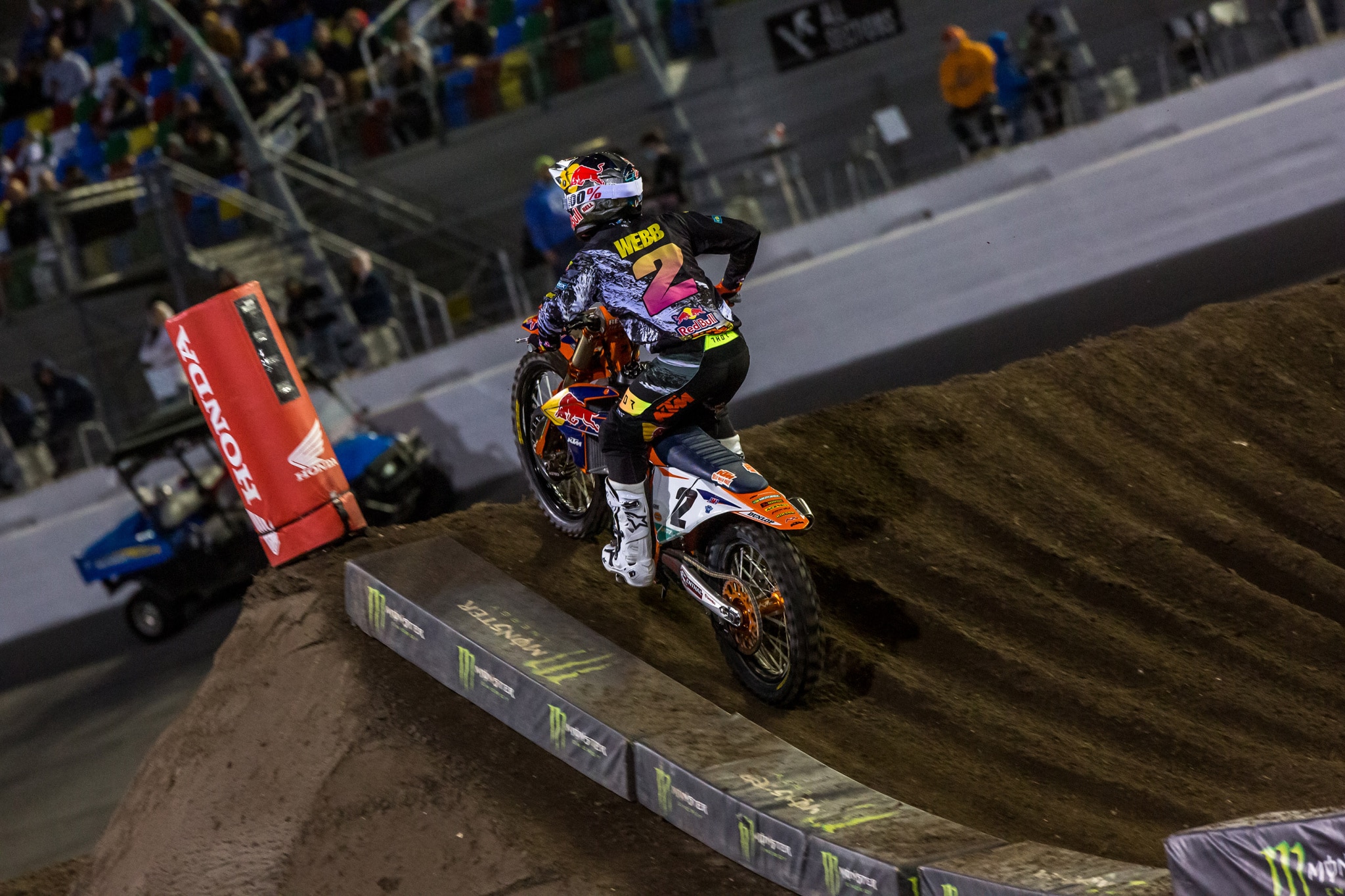 It is crucial for Cooper Webb to make an advance on Ken with only a few points separating the riders. A few big named riders such as Dean Wilson, Shane McElrath, and Mitchell Oldenburg were forced to race in the LCQ.

The 450 LCQ took off and Kenvin Moranz who we normally see on a 250 led the race. Cade Clason chased in second with Dean Wilson in third. Dean made a mistake in the sand section losing several positions. Cade then led the race after Kevin made a mistake. Kyle Chisholm sat in the transfer position after making the pass on Moranz. Mitchell Oldenburg made the pass for the lead and Dean Wilson followed suit, moving up to second. On the final lap, Dean made the pass on Mitchell, winning the LCQ.