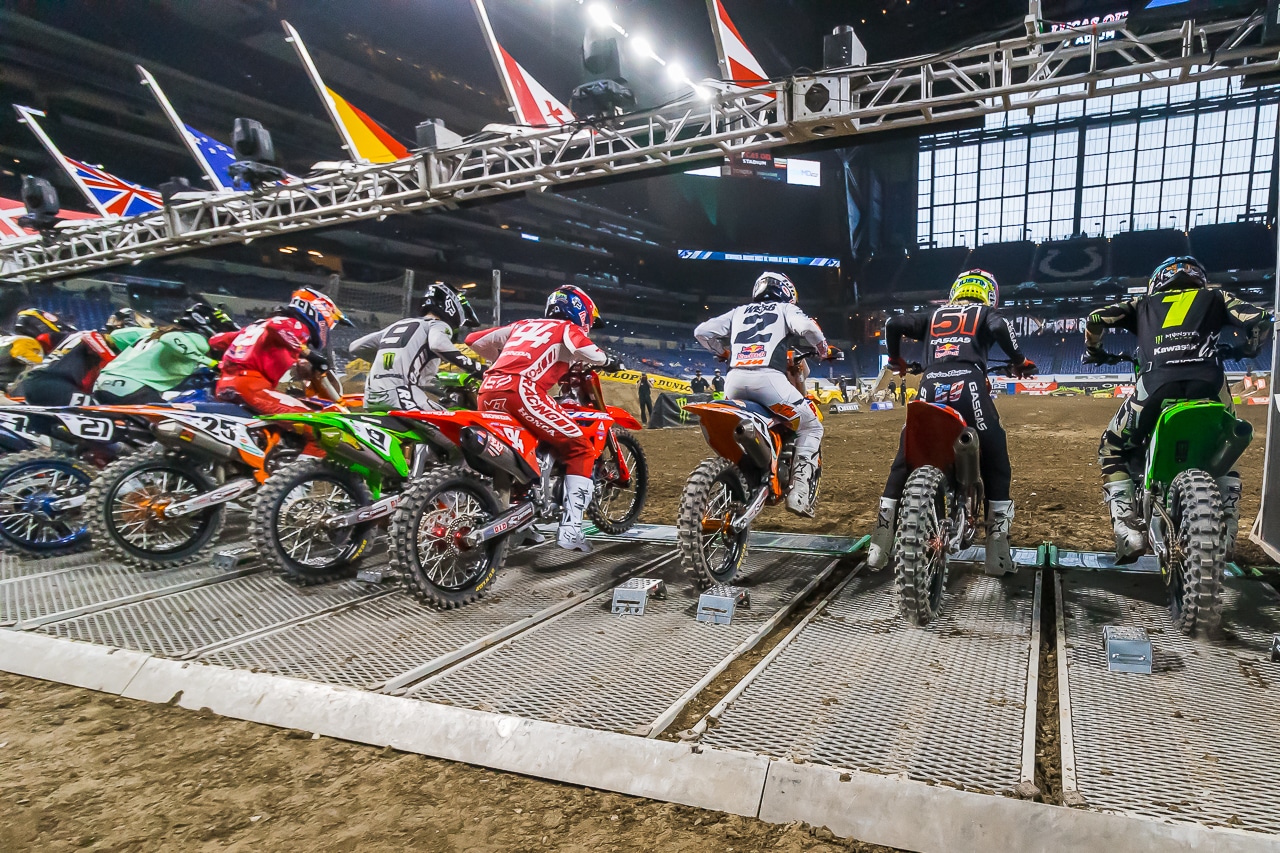 The fifth round of the 2021 Monster Energy Supercross series is in Indianapolis, Indiana, for the second time. The Tuesday night race comes as Round 5 of the Supercross season and it’s the second of three events to be held in the Lucas Oil Stadium. So far, the 450 class has had a different winner each and every Round with Justin Barcia, Eli Tomac, Cooper Webb and Ken Roczen all grabbing wins so far and they’ve made for some very exciting racing. Coming into Round 5, Ken Roczen leads the series by 6-points over Cooper Webb and 9-points over Eli Tomac. Here’s see below for the 450SX results from Round 5 in Indy. 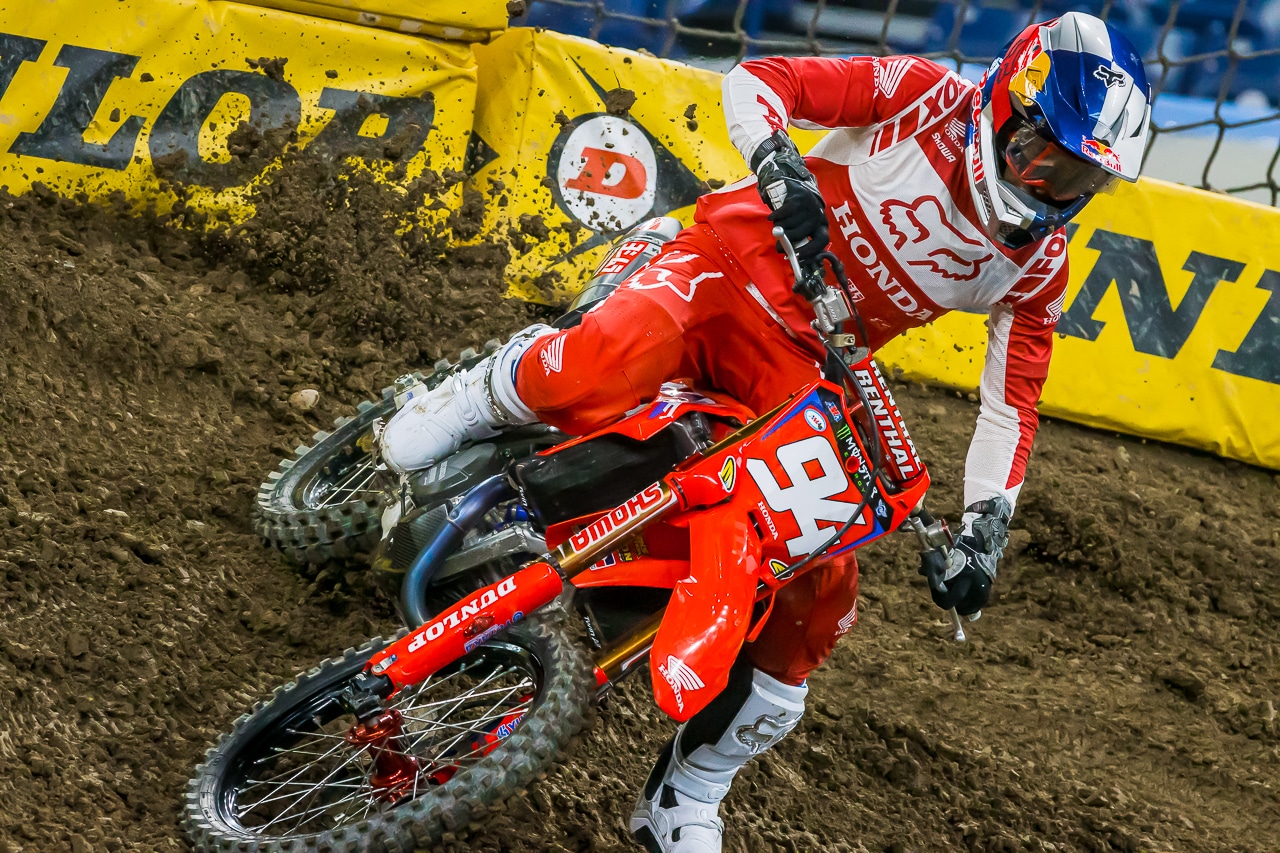 Ken Roczen breaks the streak of having a new winner at each race, he becomes the first repeat winner of the season.

Justin Barcia grabbed the holeshot with Ken Roczen in second and Adam Cianciarulo in third. It looked like we might see Barcia style out front and get back to his winning form that we saw at Houston Supercross #1, but Ken Roczen wasn’t having it. Ken made a quick pass on Barcia right away and the two riders quickly pulled a gap on the rest of the pack. Eli Tomac was eighth early, but he moved up to fourth quickly after passing Martin Davalos, Vince Friese and Aaron Plessinger. The Tuesday night track is considerably different from Saturday’s track. Saturday was slower, softer and more rutted while the Tuesday track has a faster layout with less ruts and slicker conditions in the flat corners especially. 8-minutes into the race Tomac moved up to the rear end of his teammate Adam Cianciarulo while Ken Roczen held a 7-second lead on Barcia who was 3-seconds ahead of the Kawasaki riders. Eli Tomac then made a very aggressive pass on his teammate in the hairpin corner after the triple. With 6-minutes left, Eli Tomac was able to reel his way up to the back tire of Justin Barcia to pressure him for second. Towards the end of the race, after sitting in third for a majority of the race, Adam Cianciarulo was passed by Aaron Plessinger, Malcolm Stewart and Cooper Webb all in the matter of two laps. Cooper then passed his way through the pack to finish fourth while Justin Barcia held off Eli Tomac for second and Ken Roczen checked out for the win. 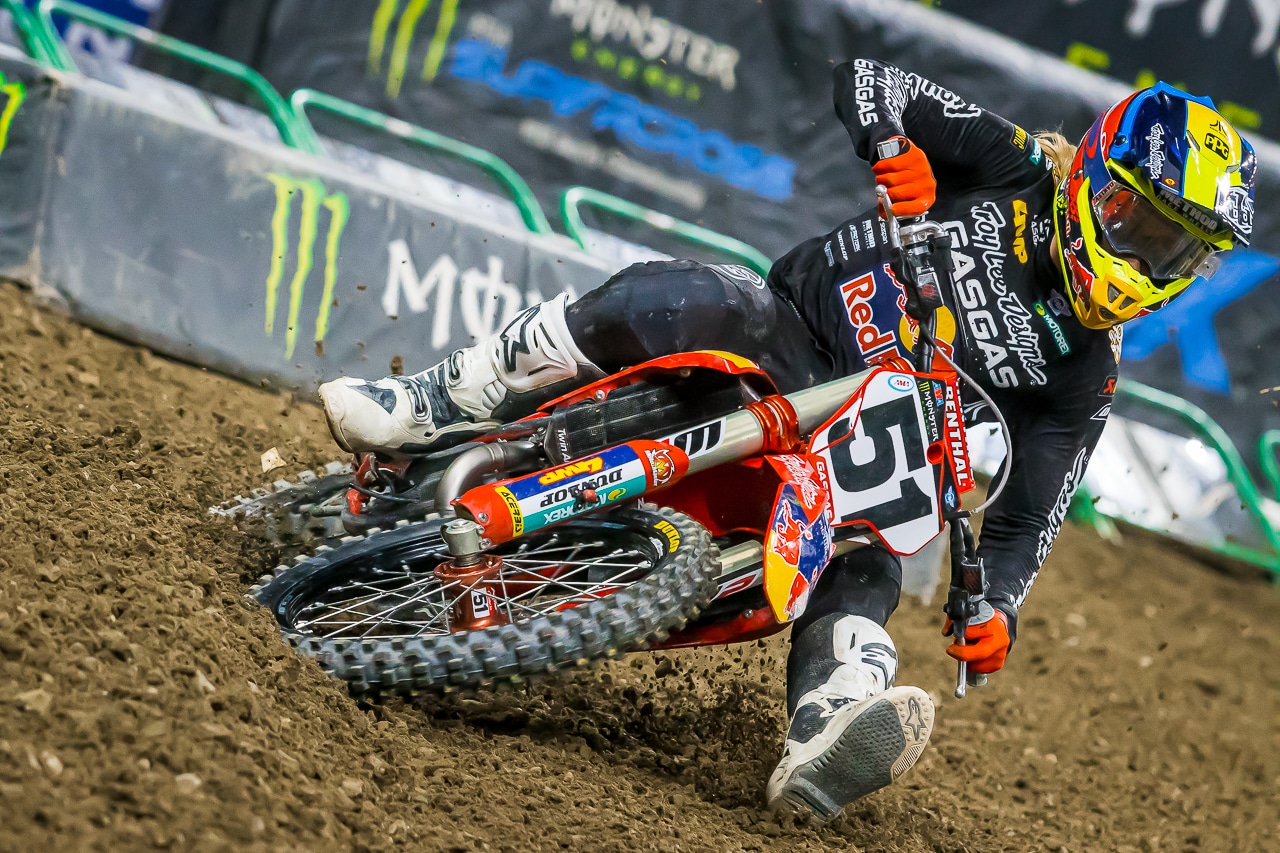 Justin Barcia held off a hard charge from Eli Tomac to finish second at Indy #2. 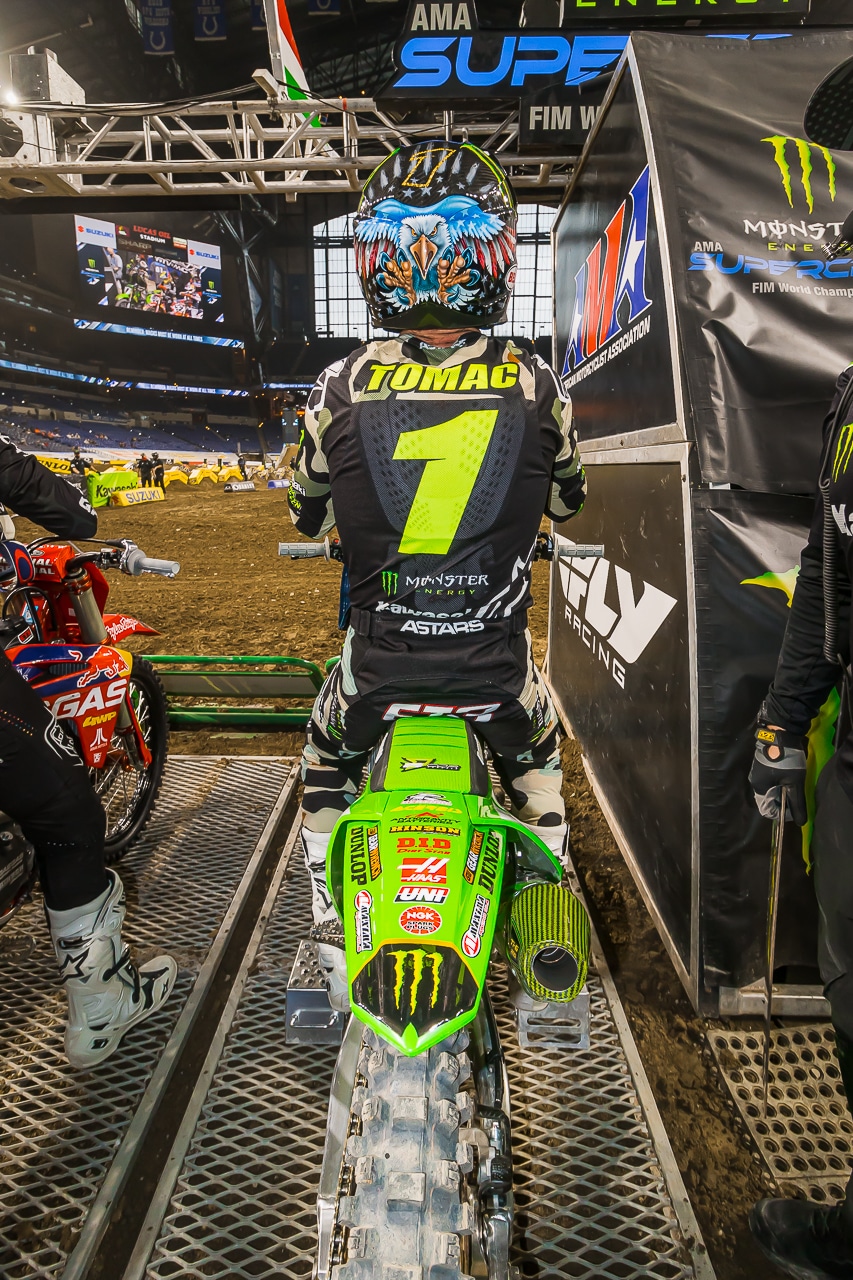 Eli Tomac came from behind to score third. It looked like he would pass Barcia for second, but Justin wouldn’t let him get by. 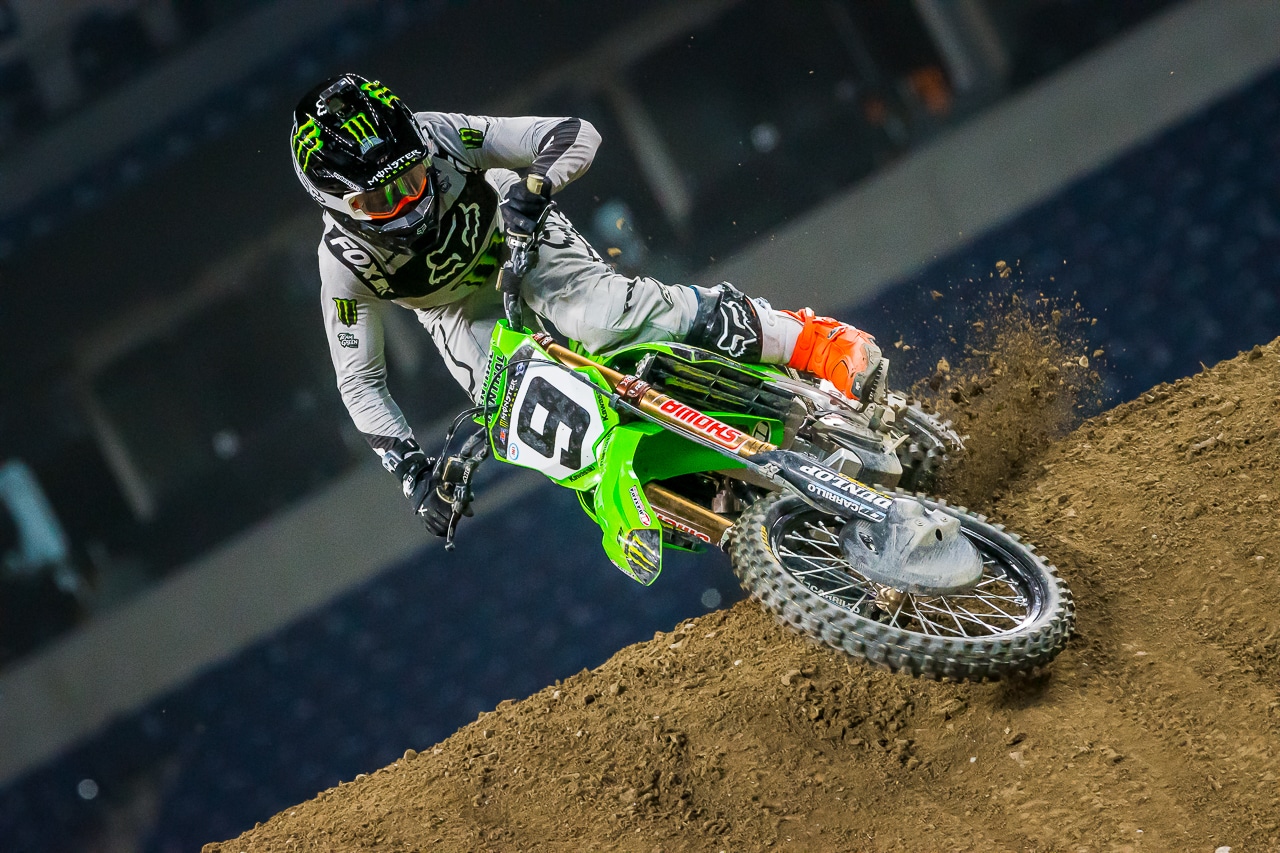 Adam Cianciarulo ran third for most of the race, but after his teammate passed him, he was then passed by Plessinger, Stewart and Webb. 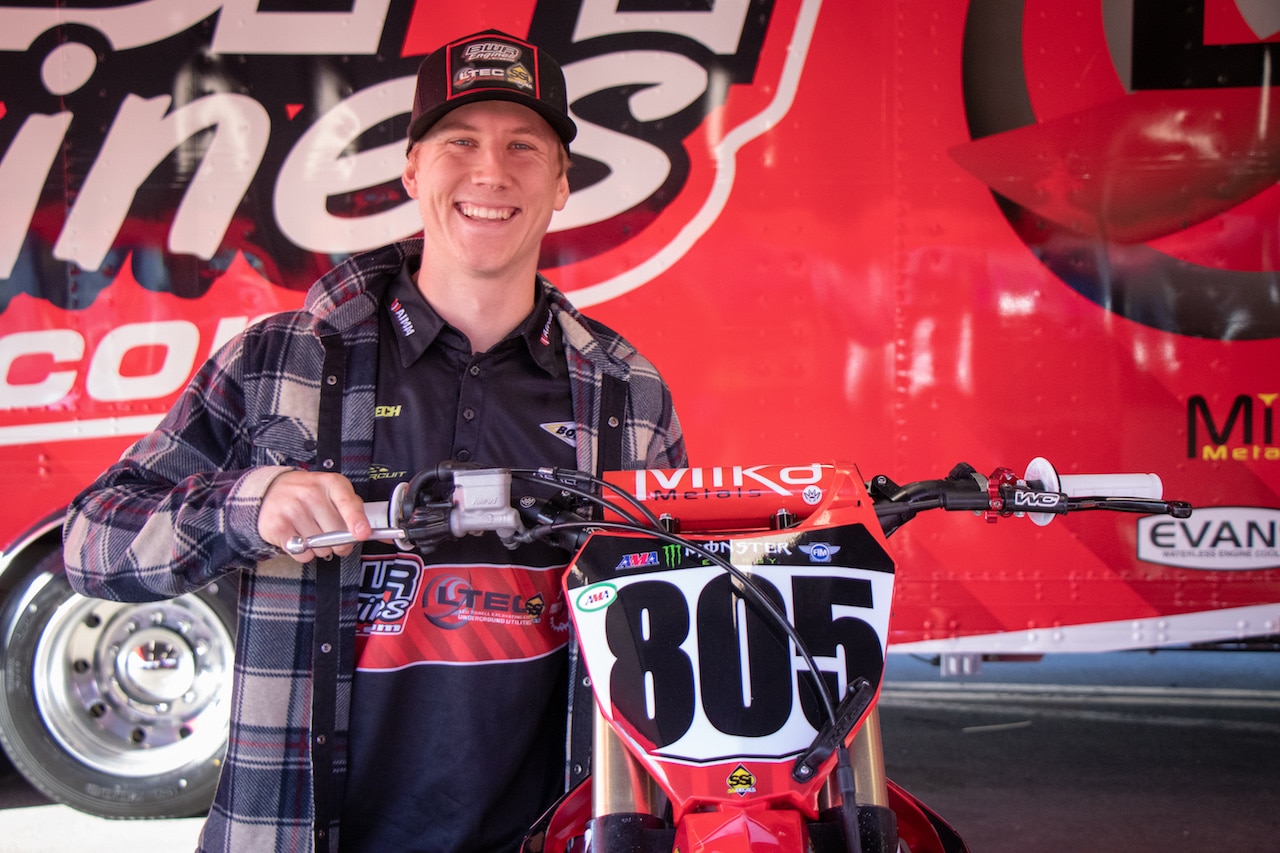 Carlen Gardner grabbed the holeshot on his BWR Honda and rode smoothly to win the 450 LCQ with Alex Ray, Brandon Hartranft and Cade Clason grabbing the finally qualifying positions. Unfortunately, Jason Anderson will not line up for the 450SX Main Event. He dislocated his finger during qualifying. 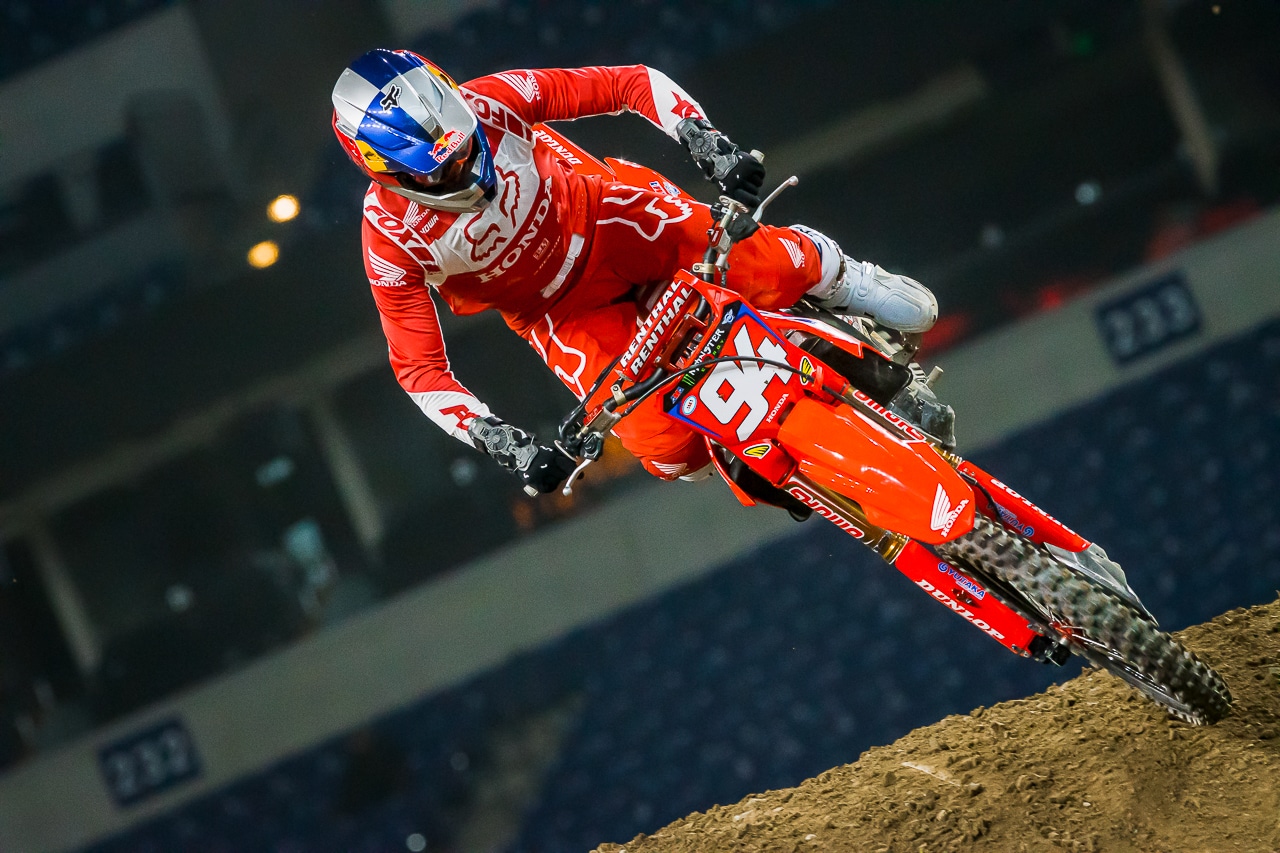 It was the factory KTM rider of Cooper Webb who got the holeshot with Ken Rcozen and Adam CIancairulo hot on his tail. Dylan Ferradis and Zach Osborne joined the front pack in the early laps. Ken and Cooper started going back and forth for the lead. Cooper went too far to the inside on a tight left-handed corner and got his footpeg caught on a tuff block dropping him into 6th putting Roczen into the lead. On the final lap, Malcolm Stewart made the pass on his teammate for third place. Roczen would end up winning his heat was ease. 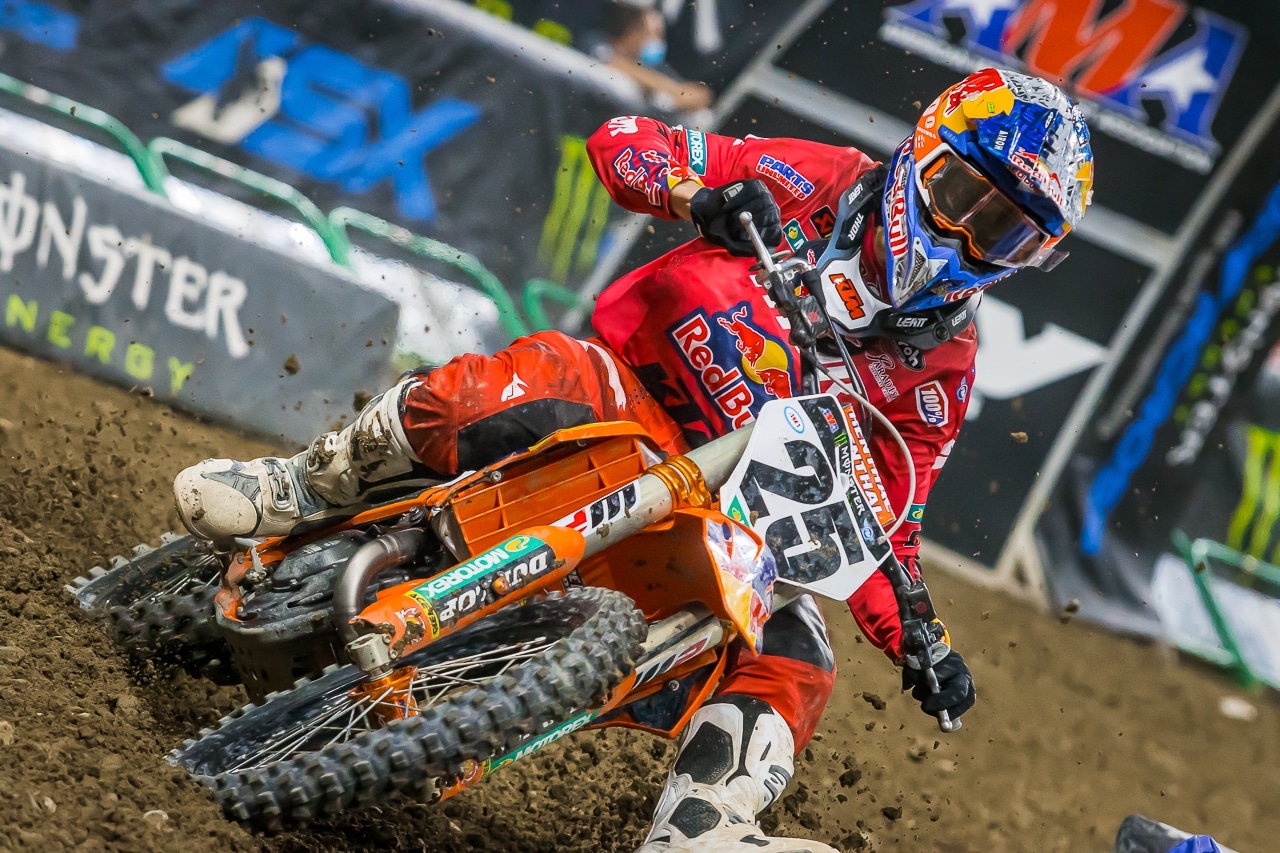 Marvin Musquin won the first 450 heat of the night in Indy.