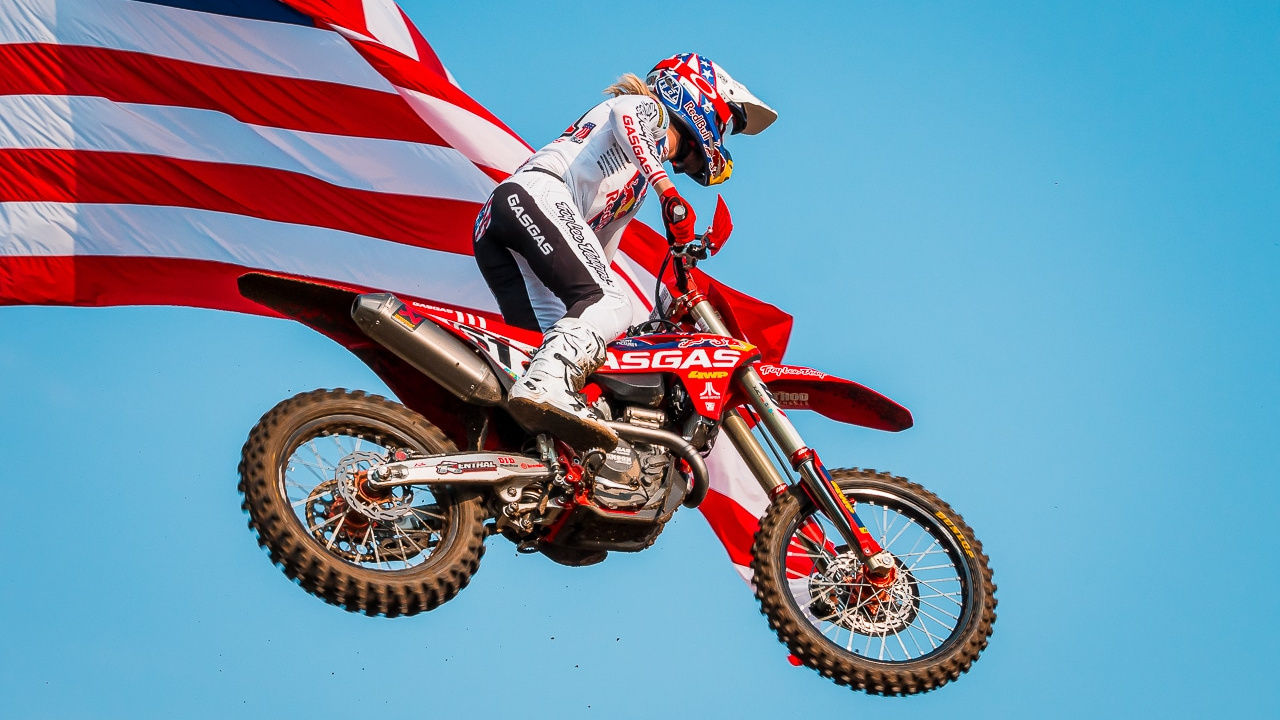 Everyone’s favorite America-themed race has finally arrived as we head to the fourth round of the 2021 Pro Motocross season at RedBud MX. The excitement from the crowd was on an all-time high as the fans were in full force wearing red, white, and blue. In qualifying, we saw Adam Cianciarulo putting on some very fast lap times. However, it was Dylan Ferrandis who put on a late heater during qualifying, setting a lap time almost a second faster than Adam’s. The 450 class is one of the most fun and exciting classes in recent memory and we’re itching to see the gate drop. So scroll down below to see where your favorite places at one of the most highly anticipated races of the year and stay tuned to Motocross Action as report LIVE from RedBud MX. Aaron Plessinger grabbed his second holeshot of the day with Eli Tomac in second. Adam Cianciarulo made his way to second place but crashed hard in the fourth turn dropping to last place. Dylan Ferrandis chased in third with Ken Roczen in fourth place. Ken Roczen made a hard charge through the whoops passing Dylan Ferrandis. Eli Tomac made a pass for the lead following the first turn after the first lap and Aaron Plessinger wasn’t going to allow him to have it easily.

Christian Craig and Chase Sexton battled for fifth place and Chase would be successful on the inside of a turn. On the second lap, Ken Roczen cased the Leap big time, bouncing about 15 feet after making the landing but holding his place in the race. At 24 minutes, Ken began to make passing attempts on Aaron Plessinger. At 15 minutes Ken Roczen went down getting ejected from his bike following Larocco’s Leap, dropping to sixth place. How about Eli’s kit though? Dean Wilson taking a small soil sample in flight. Unfortunately, Dean would go down hard just before the race finished.

The first 450 moto took off and a big pileup ensued in the first turn. Chase Sexton went down and Aaron Plessinger grabbed the holeshot. The top five were insanely sketchy as the riders rode incredibly close and on the verge of crashing. Cooper Webb ran in second until getting passed by Ken Roczen and Adam Cianciarulo. The riders were quick to hit Larocco’s Leap on the first lap and the crowd roared. Cooper Webb began to fall through the pack letting Tomac and Ferrandis make the pass.

At 20 minutes remaining, third through fifth began to duke it out as Ferrandis, Tomac, and Cianciarulo had a three-way battle. Ken Roczen made that pass on Plessinger for the lead and Aaron somehow lost his vizor. Ferrandis made his way around Tomac and started knocking on Adam Ciancirulo’s door and four turns later, sat in third. With 13 minutes left, Eli Tomac also made his way around Adam Cianciarulo and Christian Craig chased in sixth place.

Aaron Plessinger began to close the gap on Ken Roczen at 12 minutes and Dylan Ferrandis wasn’t far behind. While the top three battled, Eli Tomac crept into the picture and Christian Craig made his around Cianciarulo. Plessinger and Ferrandis went back and forth with less than six minutes remaining. Lap traffic started to play a factor in the race as Ferrandis got past Plessinger and Ken Roczen would continue to lead the race with a 2 second gap. With a minute remaining, Ferrandis made the pass on Roczen. Dean Wilson went down hard on the table just before Larocco’s Leap. Ferrandis would win the race after putting on an insane ride. Because of the two leaders jumping while Dean Wilson was on the ground and a red flag was waved, both would be docked points, Dylan Ferrandis 1 and Ken Roczen 2. Adam Cianciarulo rode well but for an unknown reason, would slowly fall through the pack.

WANT JUNIOR TO BE A SUPERCROSS STAR? REGISTRATION IS OPEN…