The 450 class remains to be one of the most stacked classes we’ve seen in a while and it’s all thanks to the amount of past and future champions continuing to race. With the class being so stacked, we can expect of the top 15 in any given day to have the chance of grabbing a moto win. In timed qualifying, it was Ken Roczen who grabbed the fastest overall time, just .200 of a second faster than the 250 class’s Justin Cooper. The track is proving to be extremely dry as the sun scorches the Colorado landscape and the technical track conditions have already proven to be challenging for the racers.

So who will grab the win in the premier class? Will the fastest qualifier Ken Roczen grab a moto win or will another of the many 450 riders steal a victory? Find out down below as we report all the action LIVE from Lakewood, Colorado. 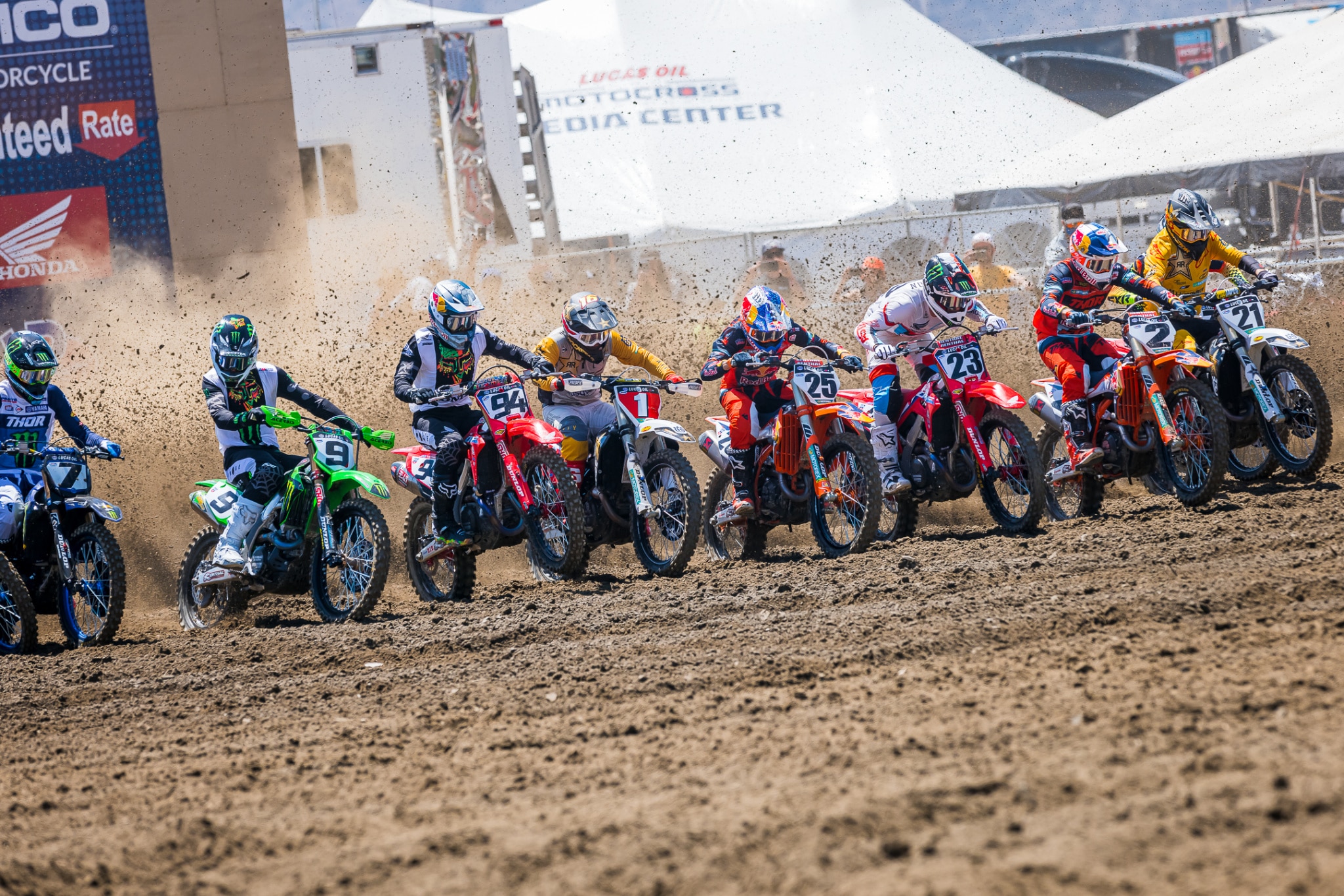 The 450 class is one of the most exciting we’ve seen in a while.

Cooper Webb was first to the holeshot but Kenny Roczen was aggressive several turns later, passing his Supercross rival. Adam Cianciarulo ran in third but a tip over in front of the mechanics would lead him to lose several positions. Ken Roczen was quick to get out of the danger zone, setting a 3.5 second gap on Cooper Webb. The top 10 was extremely close however as the riders could all be seen on the same part of the track at the same time. Cooper Webb made a mistake dropping several positions. Justin Barcia moved up to second place with Aaron Plessinger in third place. The battle for fifth place ensued as Dylan Ferrandis fought for Marvin Musquin’s spot in the race.

Joey Savatgy made a mistake losing several positions in the race with 22 minutes remaining. Ken Roczen’s lead grew to over eight seconds on second place at the 20 minute mark. Dylan Ferrandis made the pass on Marvin Musquin. Cooper Webb continued to fall through the pack, getting passed by Chase Sexton and Christian Craig. At 12 minutes remaining, Adam Cianciarulo began to feel the pressure from Dylan Ferrandis as the Frenchman started to play aggressively. Dylan passed Adam right before the finish line turn on the inside and immediately started to charge towards his teammate.

Dylan made his way around Aaron Plessinger and with three laps remaining, found himself knocking on Justin Barcia’s back door. Dylan became successful on the second to last lap. Ken Roczen would grab the overall. How about that A Stars kit? Adam Cianciarulo grabbed the holeshot with three riders wide. Ken Roczen made an insane amount of passes within the first few turns, just squeezing by numerous riders for first place. Adam Cianciarulo chased in second with Dylan Ferrandis in third. The top 10 were remarkably close to each other as the fastest in the premier class battled it out. Chase Sexton made the pass on Cooper Webb for fifth place. The battle for sixth place grew tighter in between Cooper Webb and Eli Tomac and eventually, Eli would come out on top. Aaron Plessinger followed Eli’s pace, passing Cooper Webb as well. Christian Craig also made progress on the 2021 Supercross champion. With a little over nine minutes passed, Adam began to close the gap on Roczen while Ferrandis pushed towards third place.

At 18 minutes remaining, Adam pushed Ken Roczen wide, making a close pass on the 94. Ferrandis made more progress on Ken Roczen with half the race remaining but the two also began to make progress on Adam. The three began to close even more at nine minutes remaining, and Dylan made the pass on Roczen. Dylan eventually squeezed past Adam for first at the six and a half minute mark. The two went back and forth allowing Ken Roczen to catch up and make the pass on Adam. With only two laps remaining, Dylan flew off the track after Ken closed the door. Ken won the first moto. These hillsides lead to some pretty speedy sections.

THIS WEEK IN MXA: MITCH PAYTON & THE LAWRENCE BROS…

THIS WEEK IN MXA: RYAN DUNGEY ON THE RISE & TREY CANARD…