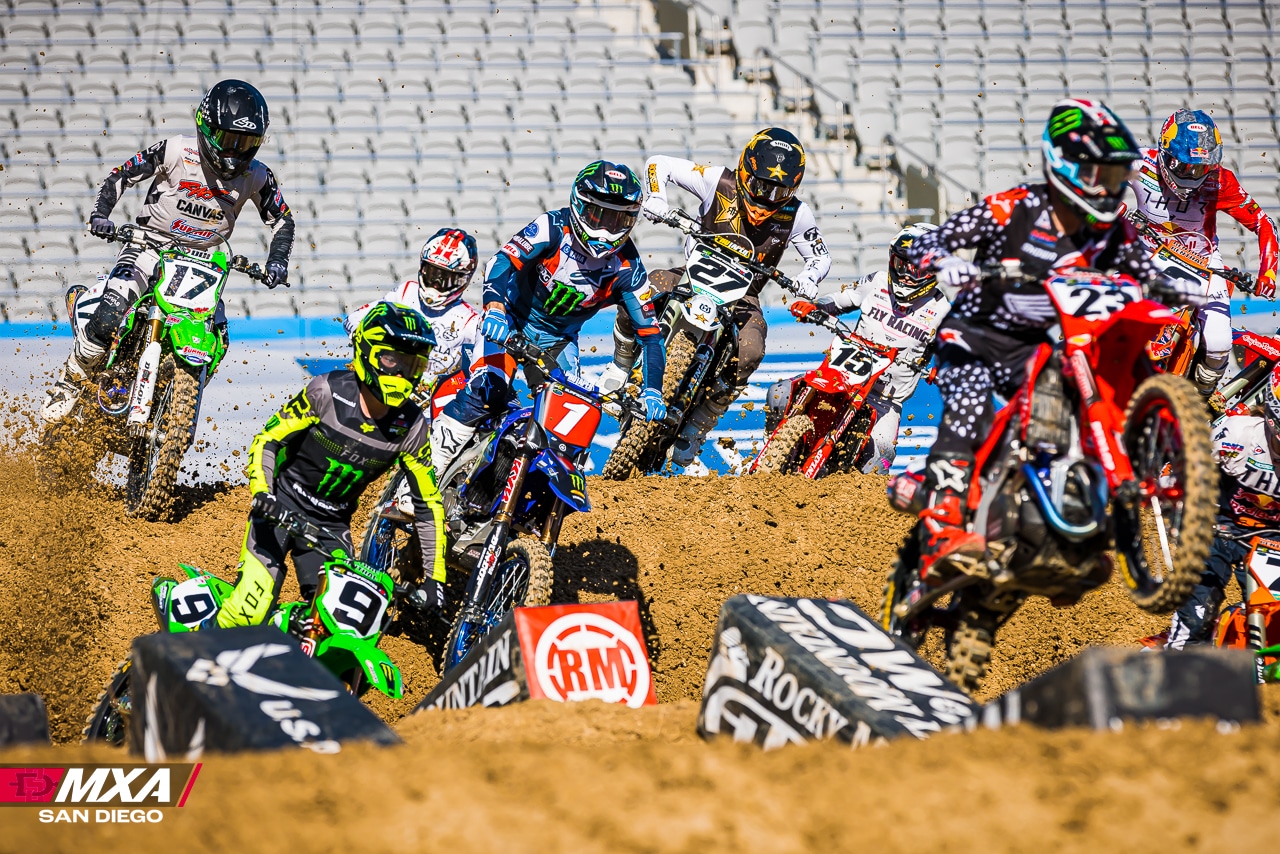 The 2023 San Diego Supercross is in the brand new SnapDragon stadium and although the temps are brisk, the stadium is heating up from all of the action on the track. Crowd favorite Malcolm Stewart scored the fastest qualifying time of the day and many race fans are hoping he can carry that momentum into the Main Event to grab his first career 450SX Main Event win. Scroll below to see the 450 Heat race, LCQ and Main Event results, presented by FXR Racing, as they come in from the SD SX. 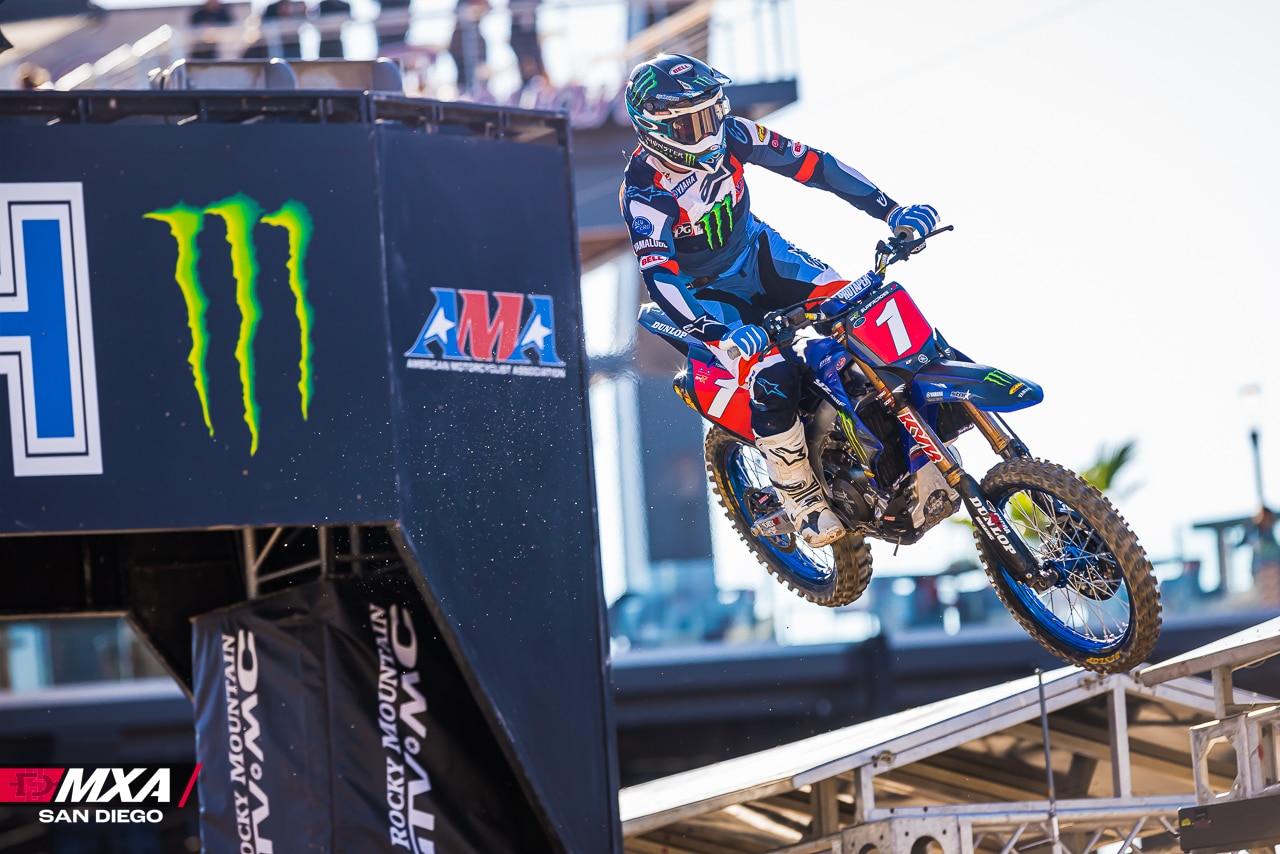 Eli Tomac on the charge.

Off the start it was Adam Cianciarulo with the holeshot. He held the lead briefly before his old arch nemesis, Cooper Webb, passed him for the lead. Eli Tomac was fifth off the start and he made quick moves to get into second behind Webb and then to take the lead. Malcolm Stewart unfortunately went down twice in the Main, the second time he lost his front fender and front number plate. Cooper Webb is new and improved for 2023, but so is Eli Tomac on his new 2023 YZ450F. Tomac got into the lead and started marching, while Webb did everything he could to keep Eli honest. Meanwhile, Jason Anderson who was third, slid out and dropped back. This put Barcia into third with Roczen and Sexton hot on his heals. In the end, it was Eli Tomac who held off Cooper Webb, even though Webb put on a hard charge late in the race. Colt Nichols almost had the holeshot in Heat 1.

The first 450SX Heat race started with Eli Tomac rocketing out of the gate into the lead. Colt Nichols was right there in second with Chase Sexton  close behind. Right away, Justin Barcia squeezed his way into second and Chase Sexton went down at the end of the whoop section, taking Aaron Plessinger with him. Both were ok, but it looked like radiator fluid was coming out of Chase’s bike and it wouldn’t restart, causing a DNF. Jason Anderson trailed Barcia and Tomac in third, with Colt Nichols in a distant fourth.

On the last lap, Jason Anderson dove to the inside of Justin Barcia on the bowl turn after the triple and took our Barcia’s front wheel. It was a slow speed take-out that didn’t hurt Barcia or his bike, but after the race the two riders exchanged a few words. Then, Barcia rode straight to the AMA official, maybe to file a complaint with the HR department? 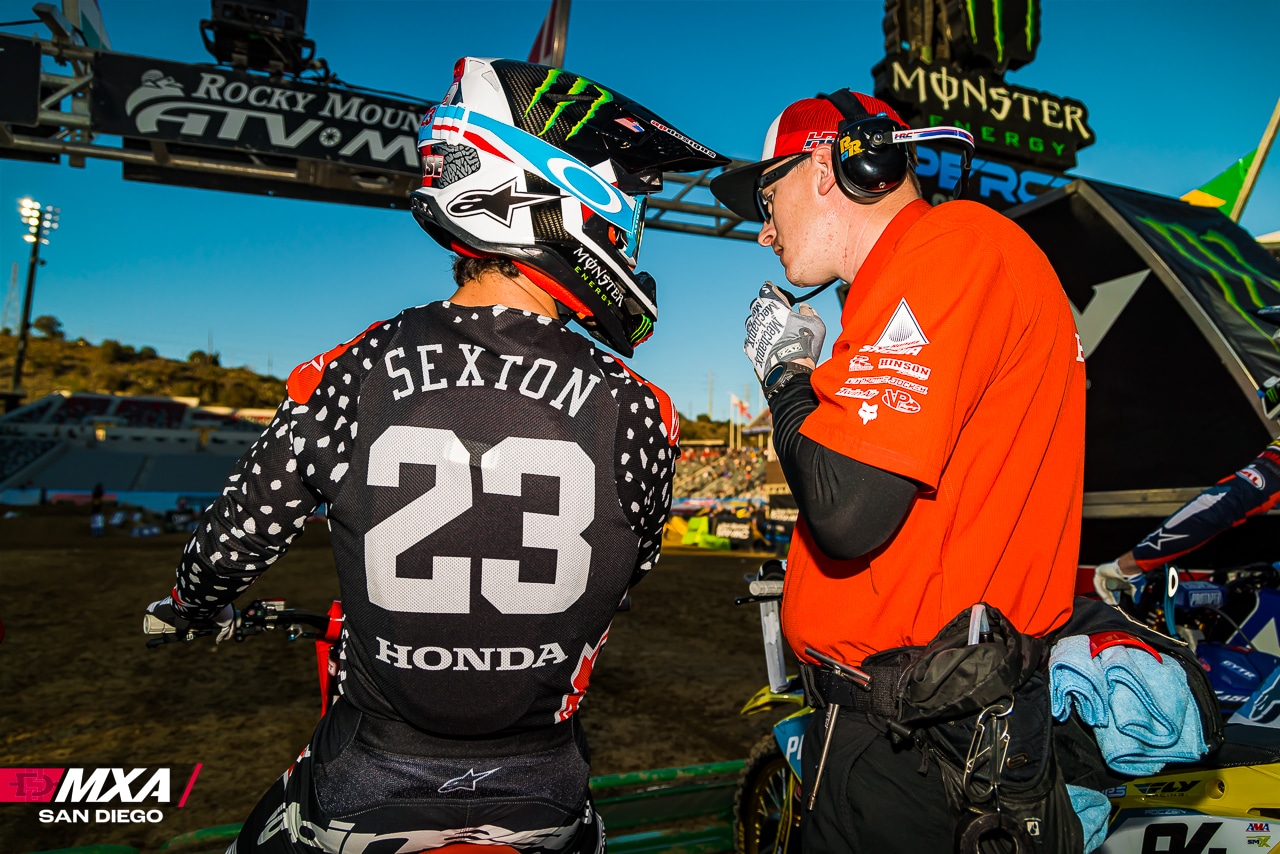 Chase Sexton went down on the first lap. He was ok, but his bike wouldn’t start. 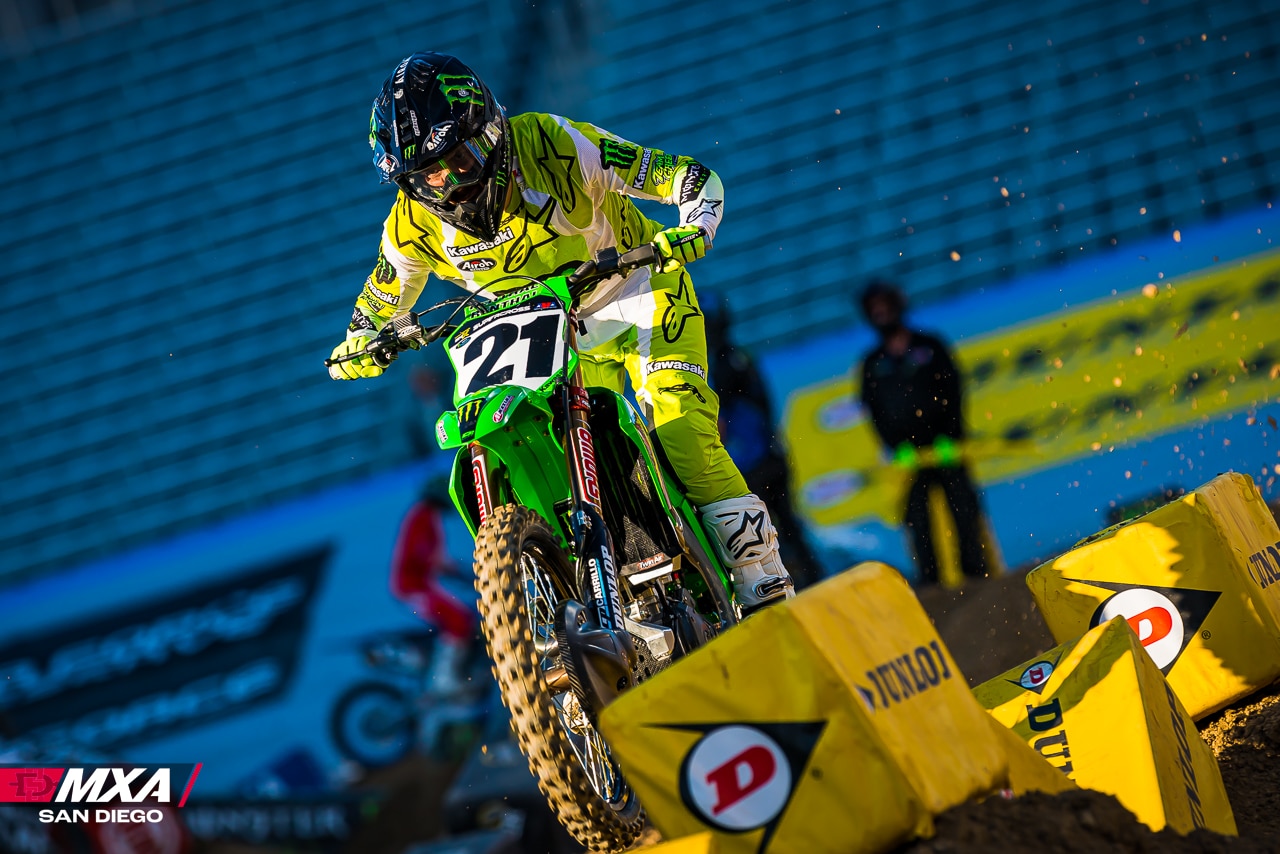 Jason Anderson was on the charge working to catch Justin Barcia and Eli Tomac in 450 Heat 1. Ken Roczen grabbed the holeshot in 450SX Heat two with Adam Cianciarulo and Dylan Ferrandis in tow. Malcolm Stewart, the fastest qualifier, was buried in the pack. On the first lap, Henry Miller went down hard on the dragon’s back. Malcolm made quick moves to get into fourth with Savatgy, Hill and Webb behind. Then, Malcolm Stewart hit the afterburners. He caught up to Dylan Ferrandis, and despite a valiant effort from the Frenchman, Stewart got by him. Then, he closed the gap on Cianciarulo, who in the meantime, was closing the gap on Ken Roczen. Malcolm made the pass on Cianciarulo with two laps to go, and then he passed Ken Roczen on the phase of the triple on the last lap. Very impressive! The crowd went wild to see Malcolm Stewart win. 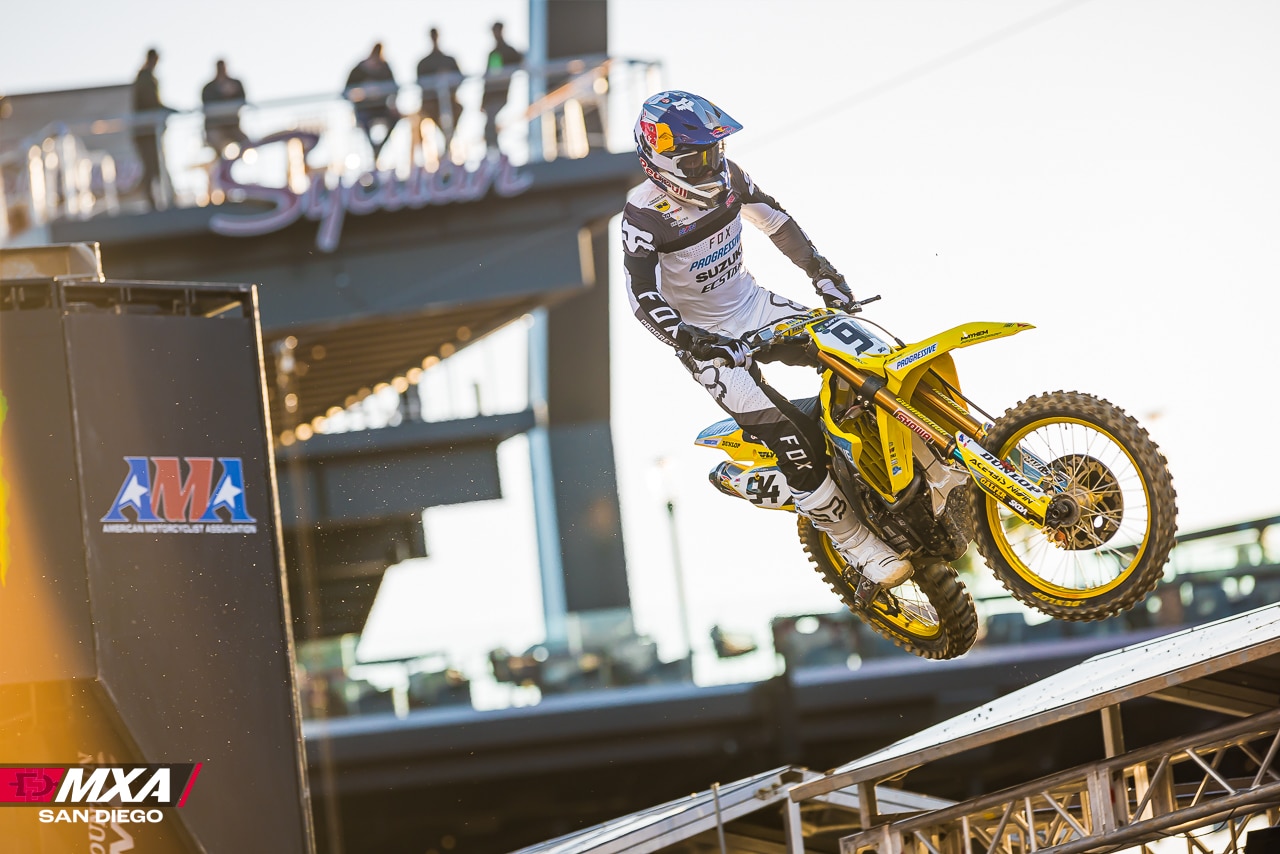 Ken Roczen led up until the last lap. Malcolm pass looked clean from the grandstands, but Ken wasn’t happy after the race and didn’t reciprocate the “good job” nod.

The 450 LCQ was an exciting one, featuring Chase Sexton, Shane McElrath, Josh Hill, Justin Starling, John Short and Cade Clason, it was stacked with good riders. Chase Sexton got to the first turn first, but he swung too wide and John Short snuck underneath. Short led for a lap and a half before the HRC rider passed by. John hung on for second place with Starling third, and Shane McElrath fourth after some hard battles with Josh Hill for the final transfer. Cade Clason was also in the battle, but he crashed in the turn after the whoops.

ROB ANDREWS “THE INSIDE LINE: RACING THE 500cc WORLD…