The 250 Pro class blasts off in Sellindge, England.

British two-stroke championships in four different classes were decided in the sun-kissed Apico Two-Stroke Festival at Sellindge in Kent on Sunday – but there were five winners! James Cottrell won the 125c British championship two-stroke title, Bradley Wheeler the 250 and George Gough the Evo crown. The Aprico Two-Stroke Festival saw veteran GP riders, enduro stars of today, a MotoGP road racer—plus clubmen and kids who all love two-strokes thrash around the hard-packed track in Kent.

The action was fast and hotly contested. None more so than in the fastest class, the British 250 Two-Stroke category— KTM’s Mel Pocock led after day one, riding a 2018 KTM 250SX owned by the team and usually ridden by Jack Brunnell. Having his first ride on a two-stroke since he quit schoolboy racing many years ago, Pocock soon came to grips with the bike and took victory in the first two motos. But in the final clash of the day, he fell and had to pull through the pack while factory enduro rider Nathan Watson, mounted on a KTM 150SX, which was at an obvious power disadvantage, cleared off to take the win. Pocock came back through the pack to claim third at the finish and end the first day as the top points scorer—leading Watson by six points, with a moto win paying 45 points. Watson had only managed fourth in the opener, won by Pocock from fast-starting Steve Bixby and World Enduro champ Billy Bolt having his first-ever motocross race. 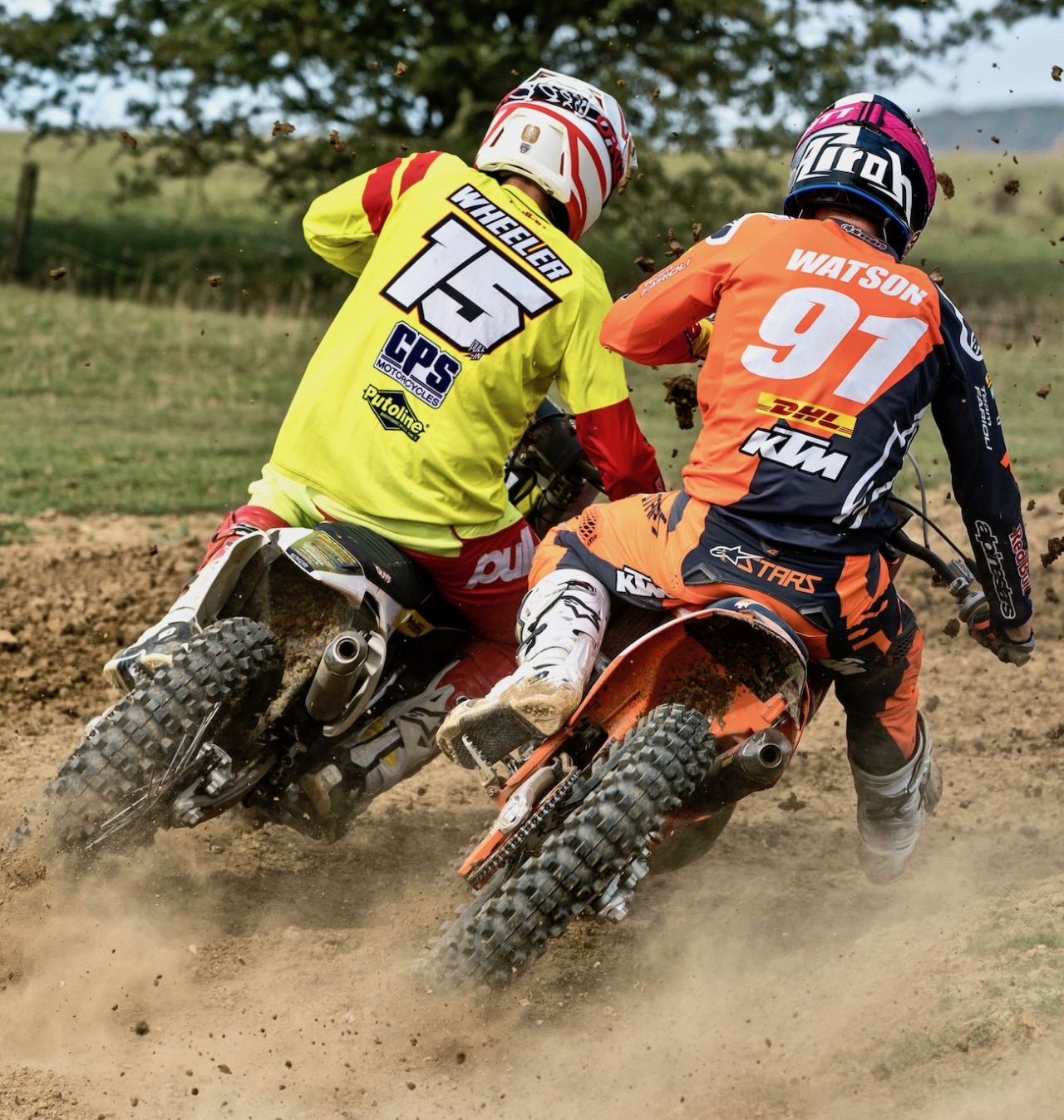 Brad Wheeler (15) took the overall British 250 Two-Stroke Championship because the riders who beat him at Sellindge, like Nathan Watson (91), missed the first of the two-round series.

In the second moto Watson followed Pocock over the line, with Brad Wheeler third from factory Husqvarna rider Billy Bolt out on a borrowed stock bike. Wheeler held on for a fine second place in the last moto behind winner Nathan Watson, with Pocock blasting by Bolt for third. Steve Bixby was fifth and Matt Burrows, who ran near the front in every moto, sixth. Nathan Watson’s current job is racing the World Enduro Championship, but he was a motocrossers before he became an enduro star.

On day two Watson really got the bike and the track nailed and was in unbeatable form. He won both motos to take the overall for the weekend, while Pocock battled through from less than ideal starts to take second overall. But it was Brad Wheeler, son of British motocross icon Brian Wheeler, who kept his head to win the championship. With neither Watson, Pocock or fast-starting Apico Husky man Matt Burrows contesting the the first round of the two-race Aprico Two-Stroke Championhsip series, the overall title chase was down to a clash between Wheeler and Steve Bixby for the title. If you follow the most extreme off-road events in the world, you’ve heard of Billy Bolt.

Bixby ran towards the front of the field several times, battling Pocock and Watson. But when it counted Wheeler made sure of the title and a second place in the final moto of the weekend hammered home that he was British 250 Two-Stroke Champion. The Super Evo class was jointly won by Billy Mackenzie and Mark Eastwood, who made a gentleman’s agreement to share the spoils in one of the most unusual decisions in racing.

Mackenzie dominated the first round of the Aprico Two-Stroke series, winning all five motos on his Honda CR500, but just weeks before the second and final round, he broke his back and underwent surgery. Eastwood didn’t race the opening round, but won all five Super Evo races in the second round – so both men ended up tied on points with five wins each. Billy Mackenzie brought his CR500 to the event, saying he could probably risk riding a single moto to score enough points to clinch the title even if old rival Mark Eastwood won all five. “The bike’s in the back of the van ready to go,” said former British MX1 champ and HRC factory rider Mackenzie. “I reckon I have got one moto in me!” But instead of risking further injury, both men sportingly agreed before the race to share the title if Mark Eastwood won all his motos – which is exactly what he did. The SuperEvo and Evo classes were mixed together on the day, and Eastwood ran at the sharp end of the pack in every moto, putting his CR250 against the faster 500s as George Gough, Brian Wheeler and Lewis Trickett all scrapped for the win. There was drama right through the day in the Evo and SuperEvo class as former Pro rider Lewis Trickett, on a borrowed CR500, had awful luck. He ran away with the opening moto, then his bike wouldn’t start for race two. The pack had done half a lap before Lewis got it going and he put on a stunning charge until the bike broke. Third time out he led only to retire with a rear puncture and a destroyed rear wheel. Day two started with Trickett missing practice as he struggled to fit a borrowed rear wheel, but he made amends by winning both motos. With three wins and two DNFs from five starts, he ended the weekend ninth overall. Brian Wheeler (1)  and George Gough (112) battled over the Evo Championships—and that included a little actual battling.

The real drama was for the Evo championship, contested right down to the wire between Kawasaki’s George Gough and former Grand Prix rider Brian Wheeler. Trickett won the opener from Wheeler and Gough, but went out of moto two leaving the the veteran riders to scrap for the lead. On the last lap, Wheeler dove inside of Gough and the pair clashed. Wheeler took the win but Gough was not pleased. In the final moto once Trickett had gone out on day one, Wheeler and Gough again battled but then Wheeler’s Honda CR500 stalled and wouldn’t start for a half a lap. He got going for sixth, but it seemed terminal.

On day two Wheeler switched to his old Kawasaki KX500 and said: “It’s so slow compared to the Honda. But I’ll give it everything I can.” Gough got the better of Wheeler on day two, following Trickett home in both motos to clinch the title by just seven points from Wheeler who was second overall. Matt Coles took third from former Grand Prix rider Jon Barfoot, having a rare race on his CR250. In the British 125 Two-Stroke Championship class, former GP rider James Cottrell was in a league of his own as he cleared off to five unchallenged wins – just as he had done at the opening round of the Apico series. He is the only rider to be undefeated in the British championship class and have a perfect two-stroke season. In the main 125 British championship class, TM’s Chuck Davies ended the weekend second overall with two seconds, two thirds and a fourth place finish. Davies spent much of the weekend chasing Cottrell and scrapping with Jordan Divall. Divall took third overall, and came close to catching Cottrell several times. Divall was just one point behind Davies. And fourth overall was MotoGP star Bradley Smith, making his return to the dirt for the first time in a decade. The former KTM factory MotoGP rider and current Aprilia MotoGP racer and tester was shockingly fast all weekend, and got better as his confidence grew. As a former youth motocross prodigy before turning to road racing, Smith had spent just six days earlier racing at over 150mph in the British MotoGP road race championship at Silverstone. At Sellindge, he was third in the opener then a strong second in moto two, hounding down Davies to take the place right near the end of the moto. But in the third moto he went down on lap one and carved through the field from last to take fifth place and third overall on the first day. But his dreams of a podium in the British 125 Pro Championship were dashed by poor starts on day two when he had a fourth then third place finishes. He ended fourth overall, and a creditable eighth in the series. 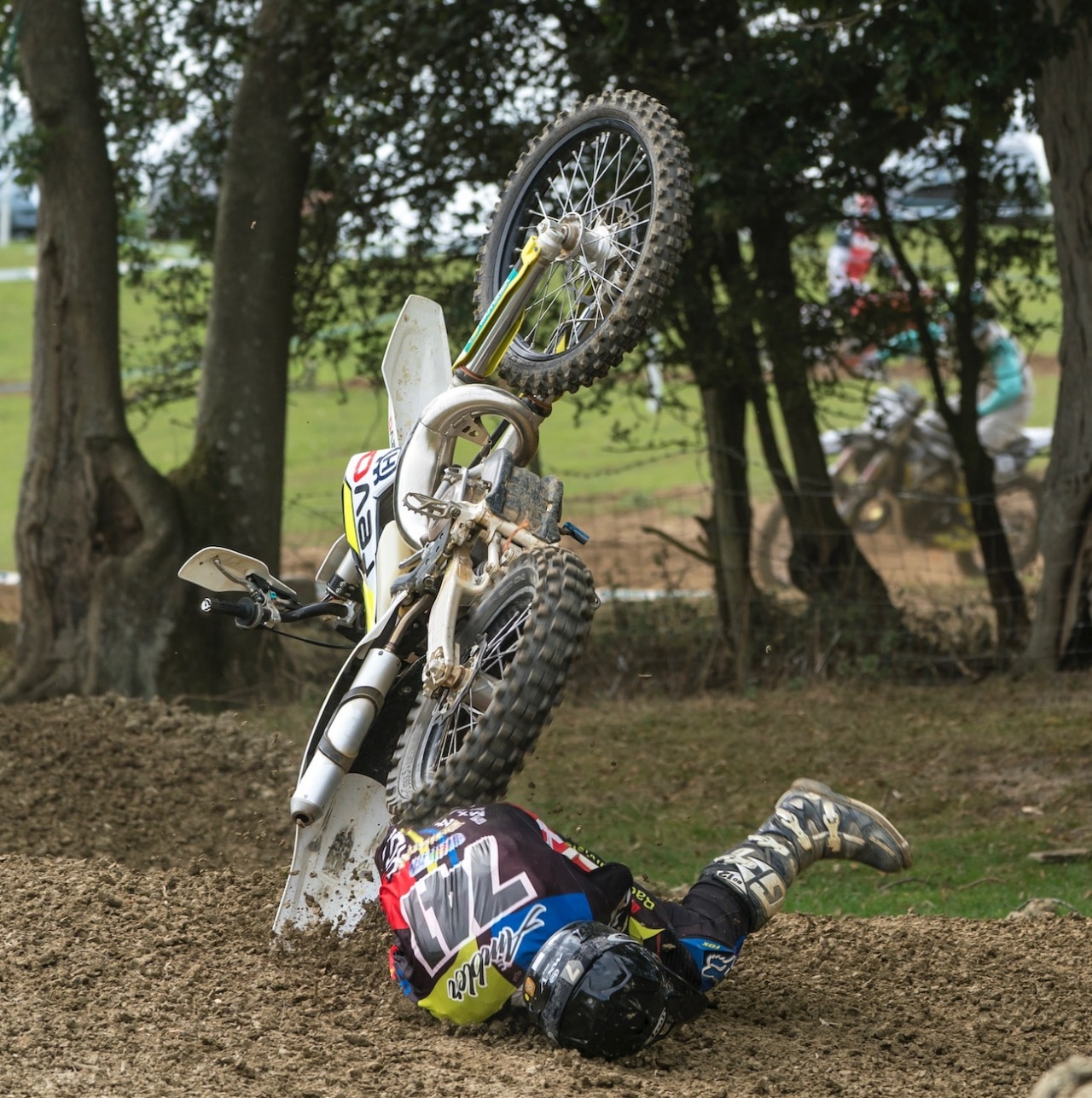 Along with its other sensors, the Husqvarna TC125 also has one that finds the best spot for optimum traction. Jordan Ambler had the perfect spot available at this exact moment.

The 125 Rookie class was run alongside the British 125 Championship class and last year’s Apico Festival 85cc winner Jack Grayshon was credited with wins in all his five motos, as he had done at the opening round.Even more impressive was that the 125 Rookie winner chased 125 Pro Champion James Cottell hard and even led the overall race at times. Grayshon had two seconds and a third in the overall races in day one then, then a fifth – thanks to coming through the pack from a spill — and a second in the final moto on day two. He was clearly the winner of the rookies, with Harrison Forde second overall. 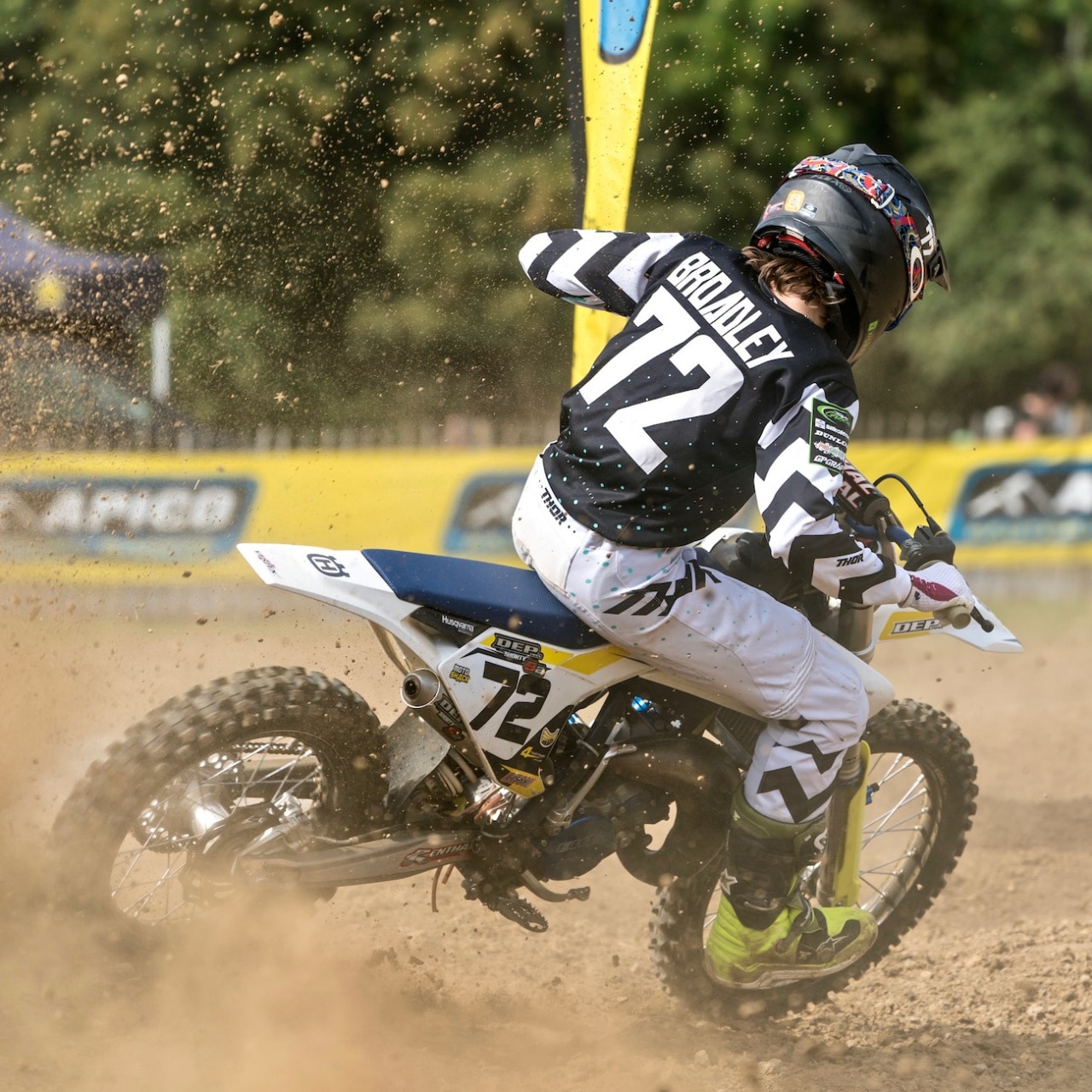 The 85cc Two-Stroke class had a £5000 ($6000) sponsorship package up for grabs from sponsor Apico. The 85 Big-Wheel class was won by Raife Broadley but only after he raced hard and fast with Ollie Colmer. Kyron Carron won the 85cc Small Wheel class with three moto wins and two seconds.

In the 65cc class it was Alfie Osborne who dominated, winning four of the five motos backed up by a third. He beat Archy Atkinson and Marley Ray Tupper. But Atkinson was crowned champion from Tupper and Lawson Peedle who finished ninth at the weekend. The 50cc autos were run alongside the 65s where Ryan Clift battled with Chase Panter, Tyler Rogers and Stanley Tupper. Clift won three of the motos from Panter, the only rider to beat him all weekend. Rogers took third overall which gave him the championship from Clift and Panter.

THIS WEEK AT GLEN HELEN: WORCS IN IN TOWN FROM FRIDAY THROUGH SUNDAY