The brass screw with the square hole in it allows you to fine tune the opening and closing of the KTM 250SX power valve.

KTM, in its infinite wisdom, realized that two-stroke owners come in a wide variety of shapes and riding styles, thus the engineers made the 250SX engine tunable via the power valve. The power valve is a movable flap located on the cylinder’s exhaust port where burnt gases are flushed out of the cylinder. At low rpm, the flap is held partially closed to make the exhaust port smaller. This helps the engine generate torque at low speeds. As revs build, the flap gradually opens, expanding the size of the exhaust outlet for greater top-end power. The ability to vary the size of the exhaust port gives your two-stroke engine broad, usable power. How you tune your KTM 250SX and which method you choose depends on whether you are using the bike for woods, desert, trail, play or racing applications. Here is MXA’s guide to living with KTM’s power valve with the help of Adam Kreft at KreftMoto.com.

Swapping ignition maps: KTM 250SXscomes from the factory with two different ignition maps. All you have to do to access the KTM ignition maps is to plug and unplug one wire. Located under the fuel tank is a wire that is fitted with a white male/female plastic connector. Since it is the only white connector under the frame, it is easily identified. The two ignition maps embedded into the KTM’s black box are Soft and Performance.

The map switch: The current Husqvarna TC250 two-strokes have a map switch on the handlebars—#1 is mellow and #2 is aggressive—and they can be swapped back and forth with ease. For some unknown reason, there are KTM 250SXs with the map switch, but none of our test bikes have ever had the switch. However, the switch off the Husky works on the KTM.

Soft map: To activate the Soft map, which refers to the fact that the power delivery will be smoothed out for ease of use, all you have to do is unplug the white connector. For most motocross racers, the Soft map would only be used on rockhard or slippery surfaces, because it takes bark out of the engine; however, because of the massive midrange hit of the late-model 250SXs, unplugging the wire is more common than you would think. 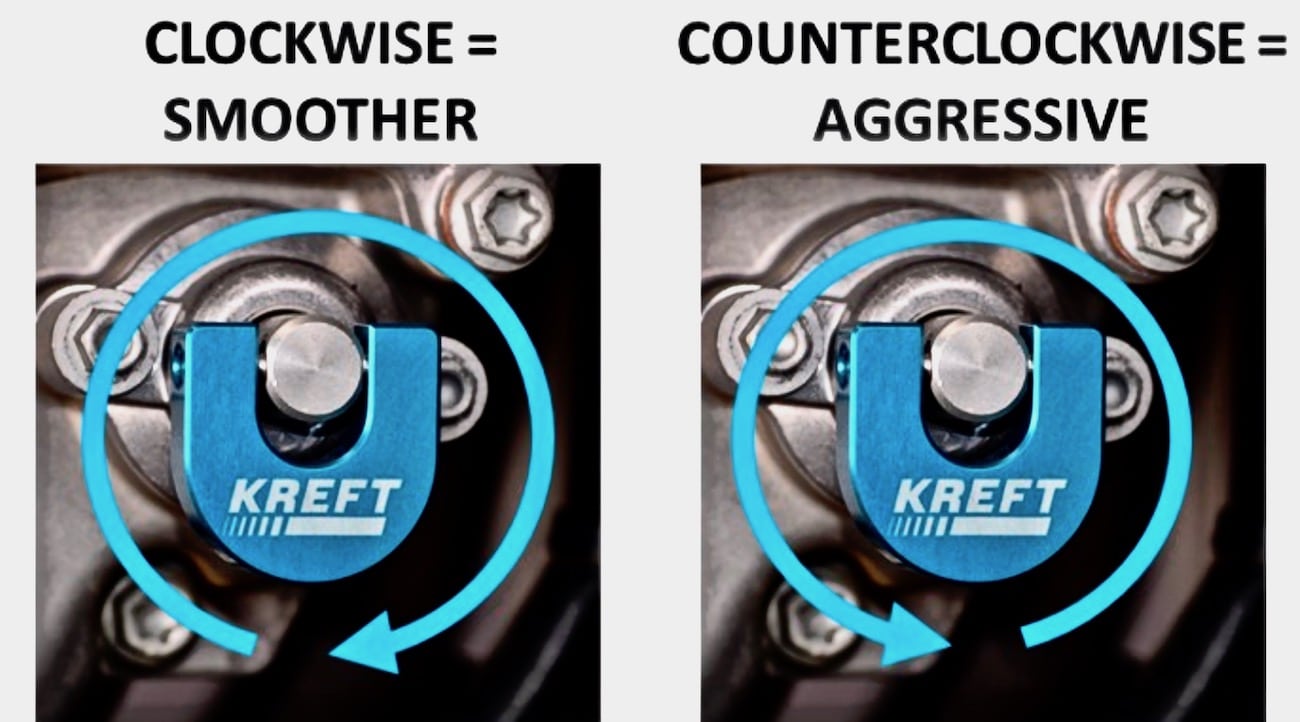 Did you notice the reference to a “Robertson head adjuster”? For some reason KTM’s engineer made the power valve preload adjuster operate with a Robertson screw. Sicne a Robertson  head is square, most riders don’t have this tool in there toolbox. In a pinch you can use a flat-bladed screwdriver that is the same size as the square adjuster; however, both KTM and Nihilo Concepts sell Robertson wrenches for the KTM power valve. Even better, Kreft Moto sells an adjustable power-valve adjuster called the Power Dial that allows you to make instantaneous adjustments (even on the side of the track). Go to www.kreftmoto.com, www.nihilo concepts.com or your local KTM dealer to get the proper tool. Power-valve springs: Your KTM comes with green, yellow and red auxiliary springs. Changing the spring can make your exhaust flap snap open quicker (red spring) or open slower (green spring). The yellow spring is the stock spring. While the larger-diameter main power-valve spring determines when the power-valve flapper begins to open, the smaller color-coded auxiliary spring determine how fast it opens and at what rpm it will be fully open.

Tips: As a rule, most MXA test riders prefer to run the yellow auxiliary spring with the white wire plugged in; however, we love to adjust the power valve by turning the adjuster. The power-valve adjustment is very sensitive. We turn it in 1/8-turn increments, always keeping track of which way we turned it. Be willing to turn it both clockwise and counterclockwise just to ensure that you are getting what you want. The full range of the KTM power-valve adjuster is six turns.