Antonio Cairoli dominated both 450 motos in the Belgian (Limburg) GP winning his fifth overall victory of the season. In the 250 class it was Ken Roczen who was victorious in his first Grand Prix win of the season. 450 KTM rider Max Nagl struggled a little bit on the Belgian track, but stood on the second step of the podium after his third and second place on today’s races. Third was Belgian rider Clement Desalle who finished third and fourth in the motos.

In the 250 class, Ken Roczen did not win both motos but his first and second was good enough. Second in the 250 class was moto two winner Jeffrey Herlings and third was current 250 Championship leader Marvin Musquin. 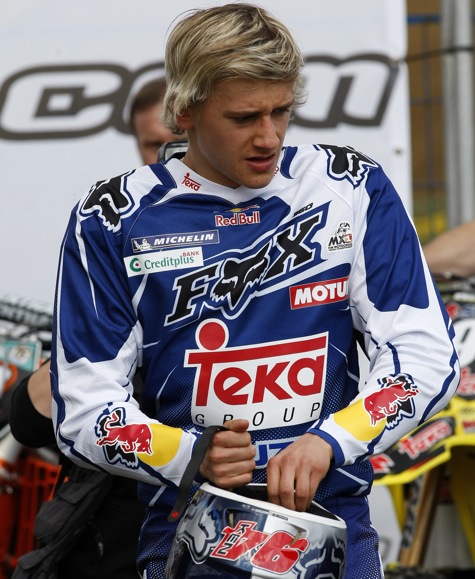 At 16-years-old, Ken Roczen wants to race the AMA 250 West Supercross series in 2011 and then return to the 250 GPs to win the World Championship before moving to the USA full-time in 2012.

Teka Suzuki Europe World MX2’s Ken Roczen won his first GP of the season in the sand of Lommel. He overtook five riders in the first motoe to take the lead and open a consistent gap from his pursuers. After the day’s first win, Roczen settled for second in the final moto. The German rider could not hide his happiness after winning the GP as he has been very close to the victory many times but misfortune has always been his biggest rival. At the moment he is still second in the Championship but he is 78 points behind red plate holder Musquin and 23 points ahead of Steve Frossard.

Jeffrey Herlings had a bittersweet ending at his favourite sand tracks. The Dutch rider led the first race for a couple of laps, but a mistake in one of the deep ruts in the Lommel track made him lose the lead and could only finish third. However, the second moto was dominated by the 15-year-old sand specialist, riding safely up to the checked flag.

The rostrum was completed by KTM’s Marvin Musquin who struggled more than expected, and despite his usual outstanding starts on his KTM machine, he could not keep the rhythm of the frontrunners. He is still on the top of the 250 World standings but he will have to focus on next weekend’s race in Loket, a track which has never brought him good results ?a broken foot in 2008 and a technical problem in 2009- if he wants to reinforce his leadership.

Joel Roelants finished fourth in his home Grand Prix with a fourth and fifth position in the races, which he got after two solid recoveries. Yamaha Monster Energy Motocross’ Gautier Paulin completed the top five with a seventh and a fourth place and moved up two positions in the standings of the Championship. Frossard finished eighth (after winning his first-ever GP in Sweden three weeks ago). The French rider knew that it would not be an easy weekend for him as he could not score any points in last year’s Lommel GP. 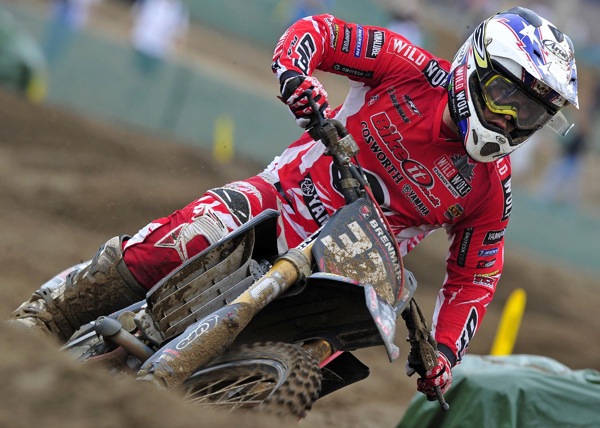 Zach Osborne had a very bad day in the sand, but is still sixth in the 250 points standings. Musquin didn’t win at Lommel, but he has a safe points lead with four GPs left in the season. Ray Archer photo Tony Cairoli is in total command of the 450 World Championships after his win in Belgium. The final four GPs are the Czech Republic, Brazil, Holland and Italy. Ray Archer photo

Red Bull KTM Factory Racing MX1’s Cairoli was back at the top of the podium and proved that Lommel is like his second home GP ? his butt patch said, “I also live in Lommel”. The Italian dominated both motos from beginning to end choosing the best lines of a track which is known as one the roughest of the Championship. Cairoli has now increased the advantage in the Championship over Clement Desalle.

The second step of the podium was for his Red Bull KTM Factory Racing MX1 teammate Nagl who recovered his confidence after a long time absence from the podium due to his collarbone injury at the French GP. The German took both holeshots of today’s races and although he managed to follow Cairoli’s lines and kept himself steady at the top, he admitted that he was riding on the edge.

For third place rider Clement Desalle it was not the weekend he had expected?he wanted to show his Belgian fans why he is second in the standings of the Championship. Once again the Belgian starred in a tight battle with Philippaerts both in moto one and two, with Desalle passing the Italian in both occasions to finish third and fourth.

Yamaha Monster Energy Motocross’ Philippaerts could not keep the rhythm of his rivals and after starting third in both motos he could only finish fourth and fifth. However, he could have had the possibility of being on the podium if he had not crashed during the second race, but he had to settle down for a fourth position overall. Fifth overall was LS Motors Honda’s Tanel Leok who missed the podium due to his numerous mistakes in moto one, where he could only be 13th. During the second moto he moved up from ninth to second showing everybody his speed and potential on the sand. Ken De Dycker won the GP at Lommel last year. This year he was sixth.

Belgian De Dycker was just sixth overall in his home GP, where last year succeeded in winning the race, and his compatriot Steve Ramon finished eighth in a race where he experienced many ups and downs. Ramon was fighting for the top three in both races, but Lommel’s ruts made him crash twice losing all his chances for being on his home GP podium.

Japanese rider Yu Hirata finished 31st, but he is looking forward to being back next weekend on the Bonver Grand Prix of Czech Republic in Loket. Kawasaki ?s Xavier Boog missed the Belgian GPs due to his left leg injury during Saturday’s qualifying race. 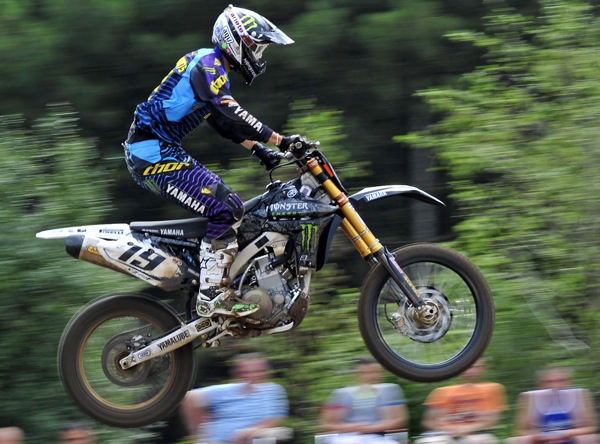 Clement Desalle is 79 points behind Cairoli, but he is 41 points ahead of third place rider David Philippaerts.