The 2019 Monster Energy Cup Supercross is here and we are getting ready for an exciting day of racing. The Monster Cup was starting to feel a little slim on riders when you think about guys like Cooper Webb, Jason Anderson Ken Roczen, Zach Osborne and Marvin Musquin not competing. But with riders like Chad Reed, Jeremy Martin and Malcolm Stewart coming back from injury, Adam Cianciarulo making his 450 Supercross debut, MXGP rider Tim Gajser coming back to race Monster Cup for the second time, Mike Alessi racing on a two-stroke, the unique track design, the joker lane, the Amateur All-Stars and Superminis, it’s shaping up to be one exciting night of racing. MXA’s Travis Fant is in Las Vegas at the Sam Boyd Stadium and he walked around the pits and grabbed these photos of the bikes while they still look nice and fresh before the gate drops. If you’d like to see our press day video, find out the LIVE TV Schedule or check out the track maps, click the link below. Dean Wilson is the only Rockstar Husqvarna 450 rider racing this weekend. Dean recently just resigned to stay with the team for 2020. To read our latest interview with Wilson click here. Although Dean is the only 450 rider, Jalek Swoll will also be racing this weekend, only Jalek is in the Amateur All-Stars class. 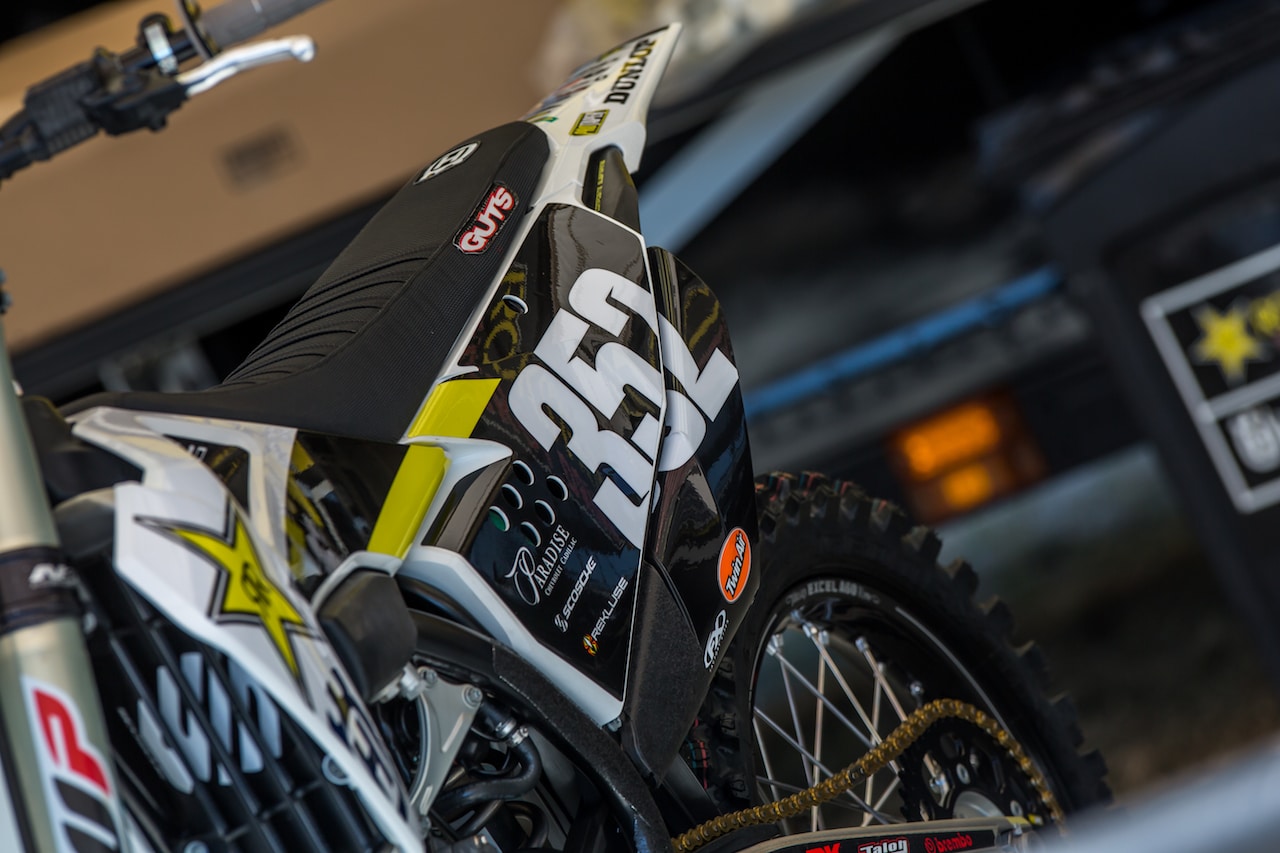 Even with the new optional ventilated airbox covers that come on new Husqvarna models, the factory team still drill holes in their airbox covers. Hey do you remember Tim Ferry? Well he has a son named Evan Ferry and he’s fast too. Evan just recently joined the Rockstar Husqvarna team and he will be competing under their tent for the first time at Monster Cup. It sure is nice to see the number 6 of Jeremy Martin back at the races! Adam Cianciarulo’s KX450 is looking green and ready for him to make his 450 Supercross debut. If you don’t recognize this face, that’s because he doesn’t usually race in America. Tim Gajser is a MXGP rider from Slovenia and he is the 2019 MXGP World Champion. He also raced at the 2017 Monster Cup and he was really fast in qualifying when he scored the sixth fastest time,  but unfortunately a big crash in the first Main Event took him out for the evening. Up close on Tim Gajser’s CRF. The other side of Tim Gajser’s CRF power plant. Although Tim Gajser is pitting under the American Honda HRC tent, he still is running the same sponsors and parts from the factory Honda team in Europe. Notice the Supersprox sprocket and Yutaka logos. Rockstar Husqvarna mechanic Jedidiah Rodriguez is excited for the gate to drop. Kyle Chisholm is in town for MEC. Mike Alessi is riding on an ESR built Yamaha 325 two-stroke. Mike is going out there to have fun and see what he can do on a two-stroke against the factory four-strokes. Up close on Mike Alessi’s two-stroke. Malcolm Stewart’s Smartop Bullfrog Spas MotoConcepts Honda. Notice the unique design on the white backgrounds. A few of the teams mix up their graphics for the one-off MEC event. Up close on the factory Yamaha engine.