One man, one bike, one Honda guru, two strokes and eighteen years of waiting for fruition We get the inside secrets from FMF, Pro Circuit, Factory Honda, Planet Honda and did our own R&D to make the 1999 CR250 as good as it could be Time has a way of blurring the rear-view vision of motocross fans. What’s better a 2004 Honda or 2004 Yamaha? We not surprised that you don’t know the correct answer ON THE RECORD: COMPLETE TEST OF THE PRO CIRCUIT-BUILT 2004 CR250

A scary fast bike that only the gifted could ride We take a look back to Honda’s 2004 CR250 two-stroke. It had the third generation aluminum frame and strange electronic powerband feel. Do you remember? Did you own any of these 125cc or 250cc winners throughout the two decades? Honda made five changes to the 2004 CR250 engine. They needed to make changes as the YZ, RM and KTM barked right by it. Unfortunately, Honda didn’t try hard enough The most talked about CR250 project bike This is more than just a bike; it’s an adventure We had to build it, because Honda wouldn’t Chocolate is a girl’s best friend — titanium is a motocrosser’s true love. Honda could build this CR250, but they won’t Aside from the sampling of aftermarket goodies, the Service Honda has the fit and finish of an OEM bike. It utilizes almost all stock parts and even the stock 2001 pipe will fit.   When four-strokes motocross bikes took over the motocross world—the second time, not the first time—only Yamaha and the European […] 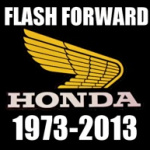 The MXA wrecking crew spends the majority of its test time racing and riding brand-new production motorcycles, but early on in each test session every bike gets its day on the dyno. It really isn?t all that revealing because by the time its strapped down it has already been ridden to break in the engine, seat the muffler packing and get a feel for where it rates. Test riders form their opinions in the saddle and rely on the dyno numbers to reinforce what they already know. When the dyno numbers are spit… Of all the major manufacturers, Honda can be forgiven for not throwing the full weight of their engineering prowess behind the 2006 CR250 two-stroke. After all, way back in 1972 Honda vowed that they weren’t interested in building two-strokes

ARE YOU GETTING THE MOST OUT OF YOUR 2004 BIKE? MXA’S SECRET JETTING SPECS, 2003 And Back

We can’t tell you how to jet your bike. It’s a big world out there (and we don’t know you all that well). However, we can tell you what jetting we run in the MXA test fleet. Take into account that we race in a Mediterranean climate, near sea level, within sight of palm trees and never far from a Double Latte. We also run fresh 92-octane gas, work on our bikes every week, clean the filters, change pistons and rings regularly, are alert to pinging and haven’t changed oil brands in over a decade. This is t…

Why are so many of the factory riders testing 20-inch front tires? Are they guinea pigs? What are the advantages and disadvantages of the new tire size? Is the 20-inch actually smaller than a 21-inch tire? Are consumers going to have to dig into their pockets to pony up for a 20-incher next year? What’s all the hype about?