1956 Gilera 500 Saturno Cross had a small skid plate bolted under the frame, which was necessary because of the engine’s large oil sump.

Giuseppe Gilera who was born in 1887 started at the age of 15 an apprenticeship with the Bianchi motorcycle company as a mechanic, he went on to further his skill with the Italian branch of the Swiss Moto Reve company including working at the factory in Geneva. At the age of 22 Giuseppe Gilera built the first motorcycle in his small shop in Milan. In 1911 he started a modest Gilera racing team and participated in many regional races. At this point in his career, Giuseppe met a man who was having trouble with his Harley-Davidson—Giuseppe Gilera fixed the problem and the man introduced Gisseppe to wealthy investors who financed the start up of the Gilera Motorcycle brand. On a side note, Gilera’s real name was Giuseppe Gellera, but he always called his motorcycles Gileras (and even had his name officially changed to Giuseppe Gilera in 1939). As always, the Italian craftsmanship in the castings, cases and construction were first-rate.

Gileras are best know in the racing world for Grand Prix road racing with Geoff Duke. Duke won winning six World Championships and six Isle of Man TTs. Three on Nortons and three on Gileras. Even with Gilera’s road racing success in the early 1950s, the best known and most successful large-capacity Gilera model of the 1950s was the Saturno. The 499cc, overhead-valve, four-stroke single entered production until 1946 as a street bike. In 1951 it got a revised engine, telescopic front fork and hydraulically damped rear shock absorbers and stayed in production with several variant for decades. 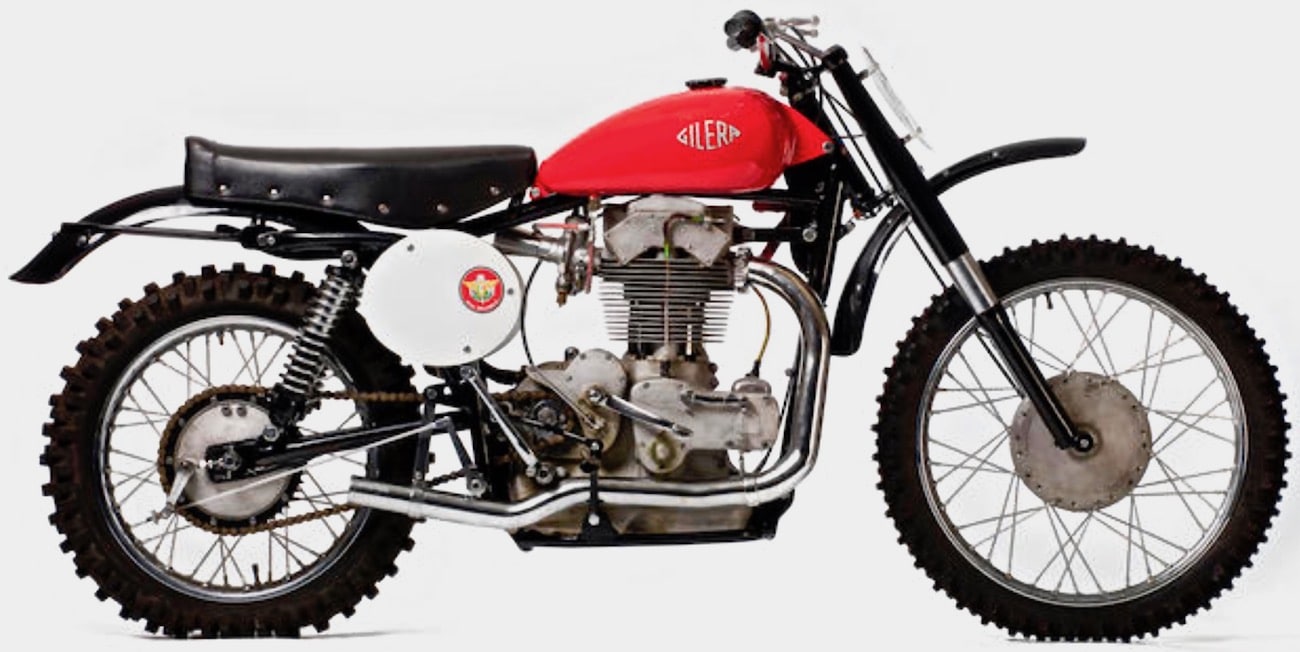 Following some successful ventures by motocross privateers on modified Saturnos, the factory introduced a motocross version of the Saturno in 1952. Based on the Corsa road-race version, the Saturno 500 Cross was basically the road race model with a 21″ front wheel, knobby tIres, straight-through exhaust; skid plate, leading-axle front forks, and smaller motocross tank, seat and mudguards.