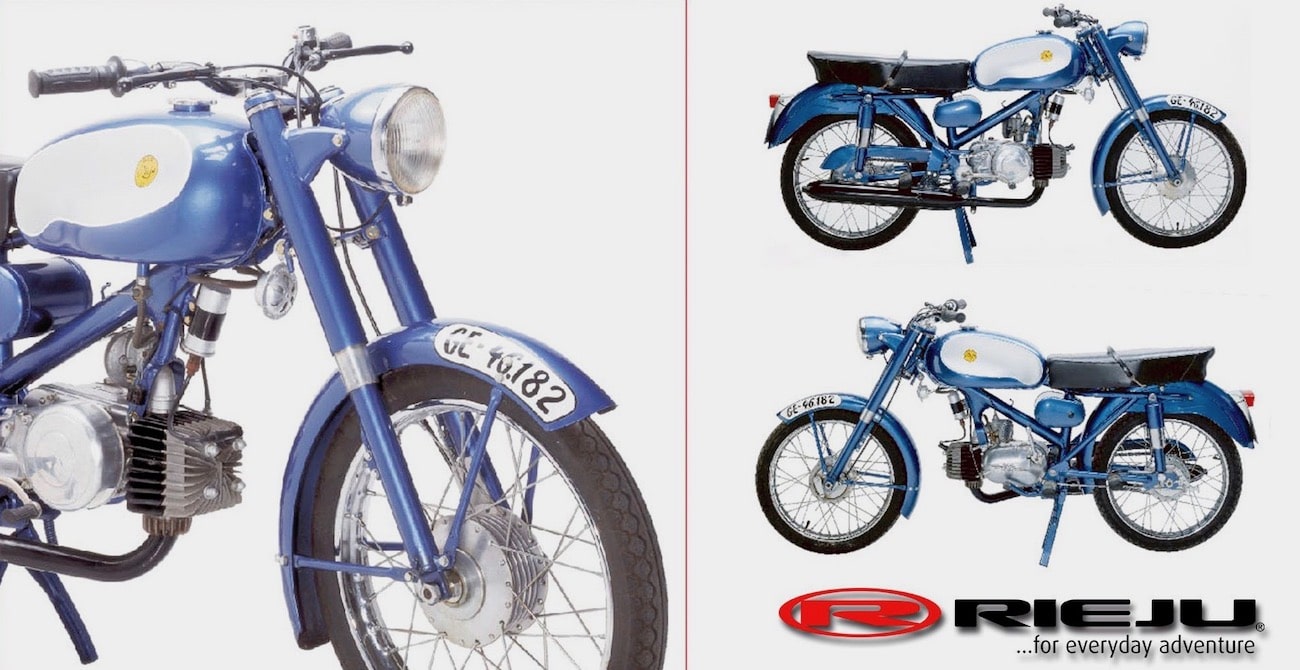 Originally founded as a bicycle accessories manufacturer, Rieju is best known as a motorcycle manufacturer. Rieju was started by Luis Riera Carré and Jaime Juanola Farrés, in 1934. The name Reiju comes from the founder’s names— the first three letters of Riera (RIE) and the first two letters of Juanloa (JU). Back in the formative years, growth of the Rieju brand was halted by the Spanish Civil War, but Rieju eventually got back to making motorcycles in 1947. It was a still a hard climb to find buyers for the first ten years, but then, in 1958, the 125cc Jaca Sport model rolled down the Rieju assembly line. It was exactly what young Spaniards were looking for. Easy transportation and some off-road fun. It seemed very modern with its aluminum rims, swept-back handlebars, two-tone paint and air-cooled front brake drum.

It may have been what young Spaniards wanted, but these added extras raised the price too high. Rieju decided to pull the Jaco 125 Sport model from the showrooms, but keep the more economical, street-oriented, no frills 125 going because it sold 3000 bikes in the first five years. It wasn’t until Rieju entered into an engine deal with Moto Minarelli to replace the original AMC engine with Minarelli 125 engines that 125 Jaco Sport that sales took off. The new Jaca produced 3.5 horsepower and had a top speed of 43 mph, but under Spanish moped regulations it was limited to 24 mph. The 125 Jaca Sport put Rieju on the map—not the same map as Bultaco, Montesa and Ossa, but the future looks bright since their prime Spanish competitor GasGas was taken over by KTM in 2020. Rieju’s production of the former 250cc and 300cc Gas Gas EC, XC and GP bikes will have Rieju-branded bikes filling the demand. Rieju currently manufactures 12,000 small motorcycles annually in its facilities in Figueres, near Barcelona, and exports 85% of its production to more than 40 countries. KTM owns the Gas Gas name and trials bikes, but Rieju will rebrand the former Gas Gas of-road bikes as Riejus. Adding the GasGas line to Rieju’s line of dual-sport and play bikes gives Rieju a solid line of full-size, off-road-ready, dirt bikes. The first sign that Rieju has jump-started is that they now have an American distributor. Central Powersports Distribution (CPD), located in Watertown, South Dakota, is helping Rieju make their first appearance in the USA.

THE BEST OF JODY’S BOX: SOME ARE BORN TO FAME AND SOME HAVE IT THRUST ON THEM