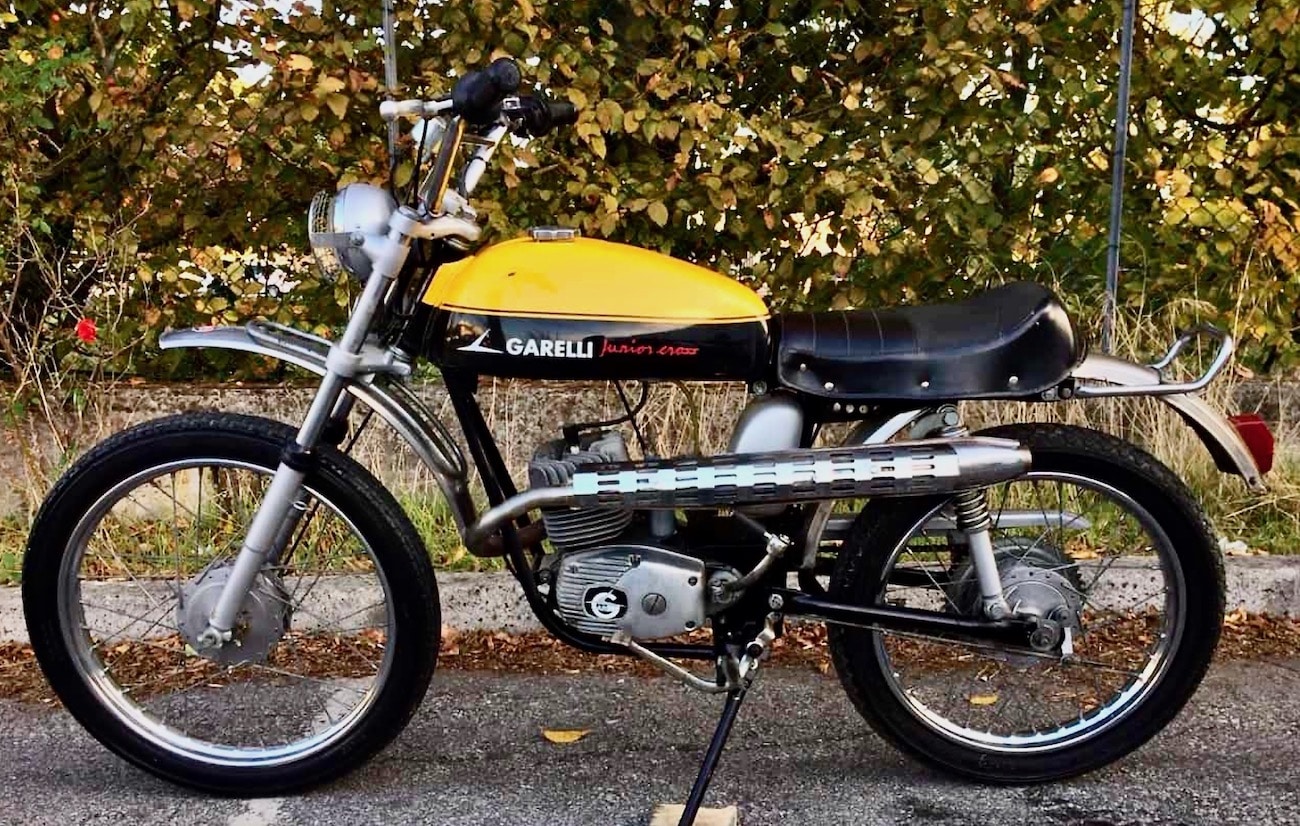 At age 22, Adalberto Garelli received a degree in engineering and dedicated his work to developing and perfecting the two-stroke engine for Fiat. Garelli quit in 1911 due to Fiat’s lack of enthusiasm for the two-stroke engine. He started his own engine company and after World War II he produced a bicycle attachment engine with roller drive to the tire called the Mosquito. In 1956 Garelli released the three-speed Mosquito moped, followed by motorcycles of with 50cc, 70cc, 98cc and 100cc engine. Over the 50 years that Garelli was in business it produce 1,500,000 machines.

The Garelli Tiger Cross started life as a moped, and it isn’t unusual to see the occasional Tiger Cross with fold-up moped pedals still attached. But to take advantage to the Italian fascination with motocross bikes in the 1970s, Garelli designed their own five-speed engine enabling them to fine tune the power output to their chassis and cycle parts. The engine is a 49cc two-stroke with a 40mm bore and 39mm stroke. Carburetion is via a 20mm Dell’orto. The Garelli engine is in a fairly high state of tune with aggressive porting, and a high compression ratio for a 50cc play racer, but it lacks the torque that would enable it to pull out of the hole found in the lower revs. It worked well in first through third gear, but had trouble pulling fourth and fifth. Tiger’s roadster brother, the Rekord, is often considered to be the faster of the two models and yet the final drive ratio (3.45:1 compared to 3.15:1 for the off-road-style machine) reveals the Tiger Cross to have a set of sprockets far better suited to speed, if the engine could only pull it. Unlike the Japanese machinery the gear shift is on the right hand side and can take some getting used to if all you have previously ridden is a conventional machine. It isn’t just the gearshift that causes familiarity problems however. The rear brake is difficult to us, but it is better than the front brake, which is not powerful enough to have any major impact upon the bike’s speed. Compared to similar drum-equipped machines of the era, the Garelli is woefully inadequate. Note the dual-sprocket with tall and low gearing on the same hub.

The first Tiger Cross machine were pedal equipped, off-road versions, of the Garelli Rekord moped. The Mark 1 Tiger is identifiable by its solid black stripe, which goes all the way to the bottom of the tank and also the polished aluminum engine casings. There is also an intermediate version, jokingly called the Mark 1.5, that saw an earlier paint scheme and engine casings married to the later forks. The Mark 2 version had black engine casings, a yellow stripe below the black one on the tank and a more stylish seat. A customized Garelli Tiger Cross with special paint, seat, shocks and a down pipe, but the basic frame and engine package. Note the large tool kit on the later model.

Later models also plastic fenders rather than the stainless steel items. Due to the crossover of parts from various models, it is hard to date the later version of the Tiger Cross, but they were still coming out with new versions as late as 1976. The late model Garelli Tiger Cross K had matte black and red paint job, high-rise front fender and black painted exhaust system.

The Garelli factory closed its doors in 1987, but was acquired by New Garelli S.p.A., owned by Paolo Berlusconi, brother to Italy’s former prime minister Silvio Berlusconi. Paulo was imprisoned for fraud in some other business dealings and Garelli closed, but was revived in 2018 to make electric bicycles and Ruckus-style electric motorcycles. You can see them at www.garelli.com.

HIGH POINT NATIONAL MOTOCROSS HIGHLIGHTS: WATCH IT IN UNDER 6 MINUTES