At first glance you don’t see anything unusual, but then you think you are seeing double.

Twin-cylinder motocross bikes are rare and successful ones are even rarer. The best known twin was the 1980 Gilera Bicilindrica. It was raced by Italian GP racer Franco Perfini and on occasion by Michele Rinaldi, but never won a Grand Prix and broke very often. Honda also made a 125 twin prototype, but it never saw the light of day. The Yankee 500Z was two Ossa 250 top-ends grafted onto special cases and mounted in an American made-frame. The last notable twin-cylinder motocross bike was made by Aprilia. It was a 450cc four-stroke twin that was raced by Manuel Priem and Josh Coppins in 2010. Ed Scheidler made a new ignition cover because the TA125 cover stuck out too far.

Scheidler wrenched for Tim Hart, Pierre Karsmakers, Danny Turner and Broc Glover in his glory days as a Yamaha factory mechanic.  He even spent a year on the Grand Prix circuit, but eventually decided to come off the road and run Yamaha’s testing and R&D department for the next 25 years. Ed was the perfect man for the job of sheparding a prototype through the rigors of testing. He was motorcycle racer, navy veteran, steel worker and welder who nurse-maided every YZ from 1979 to 2003. For a one-off Yamaha project bike, it is incredibly tidy and neat. It looks like it could have been put on the production line the next week. But it had some component conflicts.

Yamaha was interested in building a 125 twin, but they didn’t want it to come from the Japanese R&D department—they wanted it built for American racing. Ed Scheidler headed up the project at Yamaha’s old headquarters in Buena Park. Ed started with a 1975 Yamaha YZ125 monoshock frame and a 1974 Yamaha TA125 air-cooled, five-speed, twin-cylinder, road race engine. Ed made a new engine cradle, from the footpegs up to the steerer tube, and artfully curved the down tubes to make room for the twin exhaust ports and pipes. He calculated the position of the engine in the frame and welded on new motor mounts. The suspension was borrowed from the factory race team with a monoshock and turned down fork legs. 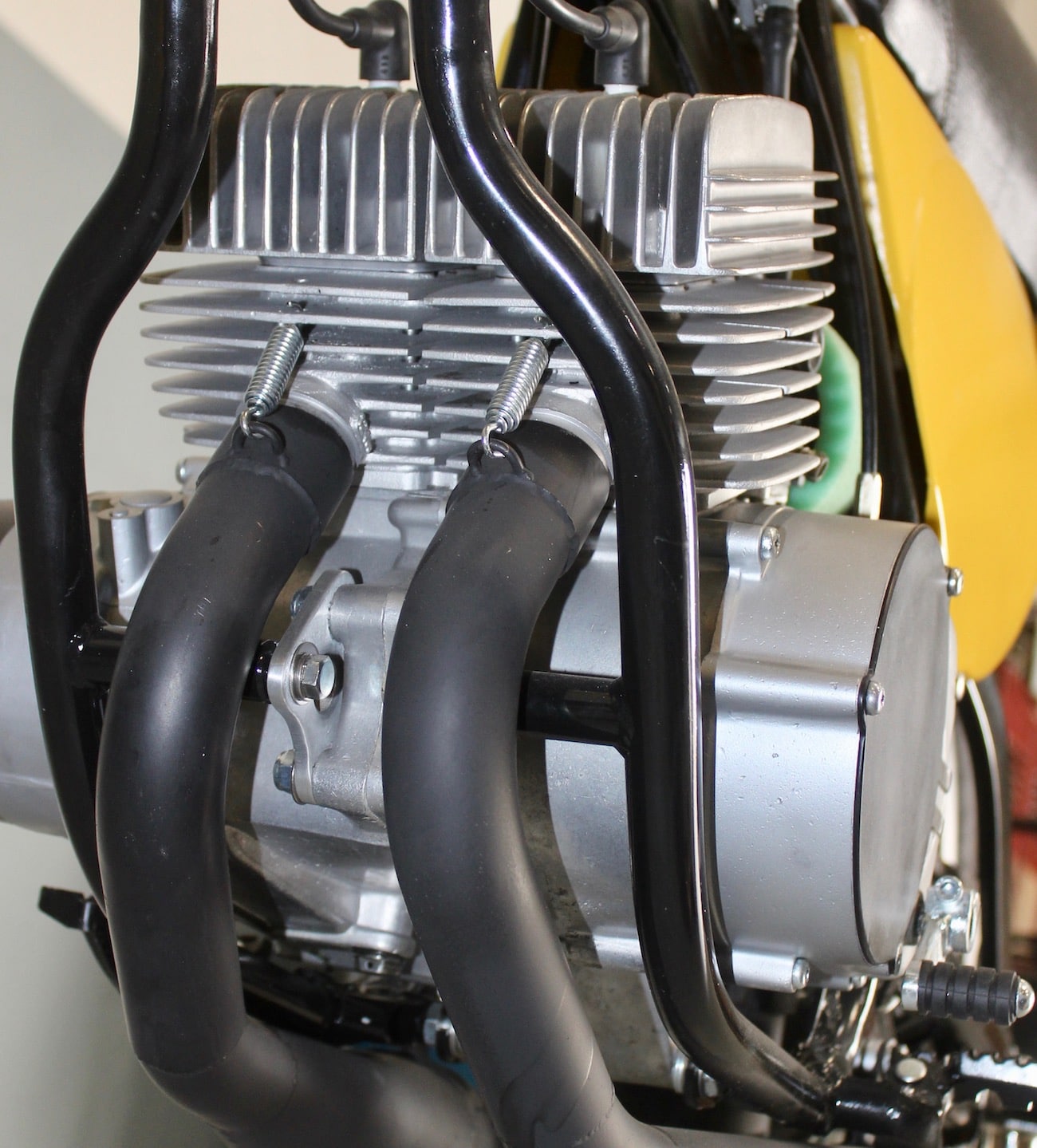 The down tubes had to make some artistic bends to go around the twice pipes.

In testing there were issues with the twin-cylinder engine. The five most notable problems were: (1) There was no room for an airbox (largely because the TA125 road race bikes didn’t run air filters or an air box). Ed used clamp-on foam filters for motocross. (2) The TA125 shift lever was designed to mount on rear-set footpegs with a linkage to the small shift shaft—the only shift lever that would fit on the TA125 engine was very short. The test riders struggled with the lack of leverage. (3) There were two gearbox choices, the six-speeder from the production RD125 street bike or the five-speed from the TA125 road racer. The street and road race gearing was very tall and Ed had to run a very large rear sprocket to get the YZ125 twin to move at low rpm. (4) The redline was at 12,500 rpm, very high for 1975, but as with most high-strung road race engines there was very little bottom-end power. The test riders had to maintain momentum and launch out of corners. The TA125 engine didn’t come with a kickstarter or electric starter. It could be started by bump starting it or spinning the rear wheel by hand with the bike on the stand.

Ed Scheidler signed up hot shot 125 Pros John Atwood and Mark “Mad Man” Lawrence to do the test riding on the YZ125 twin. The bike was awesome on fast straights, so fast that it could blow by every bike in its way as it shrieked down the straights, but it couldn’t get out of a corner with any drive. Everything it gained on the straights, it gave up on corner exit. It needed a new transmission, but Yamaha wasn’t interested in that expense and the tight maintenance schedule of the road race engine meant that it needed new cranks at regular intervals—luckily, the cranks were inexpensive in 1975 dollars. But two of everything meant increased ownership costs (and that included the two down pipes that got crushed in berms constantly).

Scheidler felt that the project had potential, but the limitation of the TA125 powerband and transmission meant that the next step in the prototype stage would be new components—and there were no readily available engines or transmissions capable of doing the job. The YZ125 twin was pushed to the back of the race shop for a couple years and then moved around until it was a forgotten piece of motocross history. Mike Bell on the Franks YZ125 twin at Irwindale Raceway in 1976.

In 1976 Kelvin Franks started working on an identical project, using a Franks Honda CR125 frame with a Yamaha TA125 twin engine. Mike Bell was the man assigned to race it. Mike said about racing the twin, “It was an experimental Franks Yamaha TA125 twin that Kelvin Franks had me race at Irwindale Raceway in 1976. The engine snapped a rod heading for the biggest jump on the track, throwing me over the bars in a hurry! It was tough to get that thing out of a corner, but when it hit the sweet spot of the powerband it was a rocket ship. Fun and scary!”

Mike raced it only that one time at Irwindale and it to got pushed to the back of the race shop and forgotten.

BEST OF JODY’S BOX: AUSTRIAN BIKES WERE NOT RICE BURNERS, BUT DON’T TELL THAT TO A TEXAN

THIS WEEK IN MXA: AVERAGE RIDERS SHARE THE EXPERIENCE OF RIDING A…