Cecil Pearson is in his 70s and is crazy about two things: (1) Motocross and (2) JAP engines. As a young man he raced JAP scramblers in 1960s, where he specialized in Irish grasstrack racing. After retiring and thinking about it for a long time, Cecil decided to build his his own brand of scrambles motorcycles. He started with a JAP engine and a Rickman Metisse frame from Adrian Moss. It took some modifications, but Cecil was able to get the JAP engine and the AMC gearbox wedged in. The Pearson/Rickman JAP 600 runs on methanol and has total loss oil system. It weighs 275 pounds and has run off a limited production run of machine to be used by the JAP Racing team—the project is being helped by irish frame builder Harry Stitt. The JAP engine is named after John Alfred Prestwich who began manufacturing motorcycle engines just after the turn of the century to be used by many different motorcycle brands. 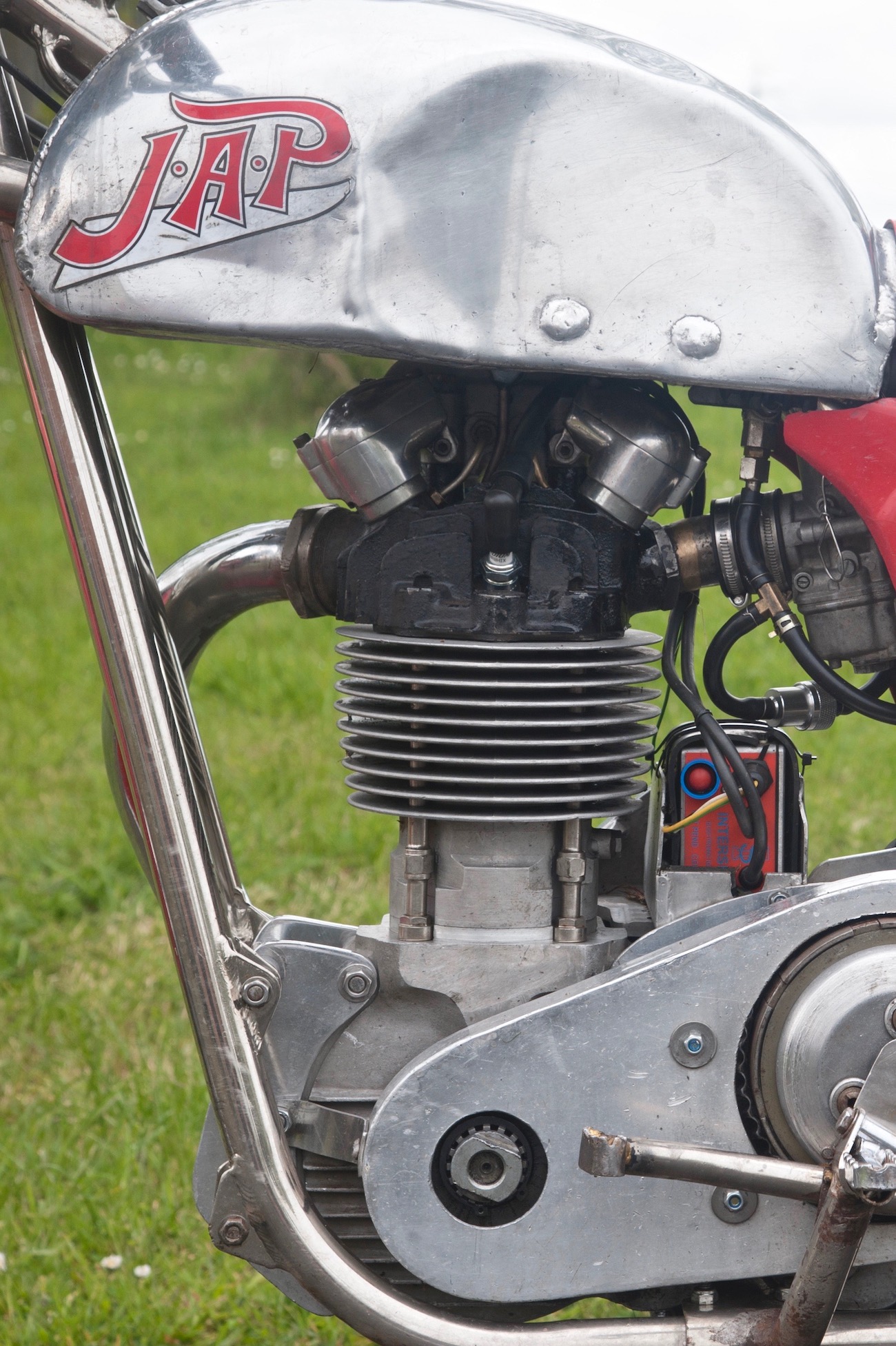 The JAP enginess don’t have a gearbox. It has to be added later.

The JAP engine became associated with speedway and grass track bikes in the 1960s—and at that time the John Albert Prestwich company had been acquired by Villiers Engineering Company (of Villiers Starmaker fame). The JAP engines (under Villiers ownership) were developed for grass track, speedway and long track use. These four-stroke engines were popular because of their four-valve heads, twin spark plugs and early electronic ignition systems. Later in the 1970s, competing engines from Jawa, ESO and GM offered better performance. But, Cecil lives and breathes JAP. Since com­ing back into mo­tor­cy­cling af­ter a long lay-off Ce­cil Pear­son has formed Team JAP in Northern Ireland to race with Rickman Metisse or custom-built BSA Victor replica frames (by Harry Stitt) housing 1930s JAP speed­way en­gines mated to an AMC gear­box, Nor­ton clutch, Dellorto carb and specially made electronic ignition. The JAPs are a big hit at vintage races all around the continent. Although production is limited, Cecil Pearson is willing to make as many bikes as he can to spread the JAP name. Luckily the supply of JAP engines isn’t as limited as you would think since they were in production for 40 years and then abandoned when better engines became available for Speedway. Twin shocks and a KTM rear wheel and chain guide. The forks are by Marzocchi. The straigh-pull front hub is of unknown origin and the drum brake shoes don’t have a lot of room to work with.