REM GLEN HELEN: TEST DAY FOR THE LUCKY FEW… MAKE THAT MANY If you are looking for the most competitive class at Glen Helen, look no further than the Over-50 Experts. Every race is hand-to-hand combat. Here, Over-50 Expert winner Luther French uses a holeshot to break away from a pack that includes Bryan Friday (43), Dave Eropkin (811), Ron Shuler (33) and Randy Skinner (192). Photo by Debbi Tamietti

We don’t know how they run the motocross races at your local track, but Frank and Myra Thomason have found the key to keeping SoCal racers happy. First, REM races on Saturdays instead of Sundays. They don’t start practice at oh-dark-30, but instead hold it at around 9:00 a.m. to give the racers time to navigate the California freeway system. REM has long motos so that no rider is ever left wishing for one more lap — more than likely they are praying that the white flag will come out soon. There are not a million races at REM, on the average weekend all of the classes are combined into 6 races (enhanced by multiple gate starts). The track is situated high above the Glen Helen National racetrack on the exact spot of the old 1970’s Arroyo Cycle Park. Although there are jumps, the REM track is old school in that it winds its way through the hills and canyons…and is best known for how rough it gets. And, as the icing on the cake, the races are normally over by 2:00 p.m. so that the racer have time to go home and prep their bikes or bodies for Sunday plans. Australian Jacob Blomfield (24) was a fast starter, but the long motos at REM were just too long for his fitness level as he got caught in both motos by 450 Pro winner Jeff Loop and, here, by 250 Pro winner Preston Tilford (774). Photo by Dan Alamangos

This is how to have fun races. REM doesn’t have 36 different classes. They don’t run 4 lap motos. They don’t have doubles, triples or death defying feats of derring-do. They get you in, challenge you, give you all you could possibly want and get you out. Plus, if you are over 40 years old—they have the biggest Over-40, Over-50 and Over-60 classes of any weekly race in America. And, REM races 40 weekends out of the year. REM races again next Saturday, July 4th, on the AMA National track. For more info go to www.remsatmx.com Cody Johnston was third in the 250 Intermediates behind Gordon Keller and Jon Ames.. Photo by Dan Alamangos Preston Tilford (22) raced MXA’s 2016 KTM 250SXF straight out of the crate to victory in the 250 Pro class. Photo by Dan Alamangos Dan Alamangos (192) is shown on MXA’s 2015 KTM 350SXF, which he raced in one moto before racing the second moto on the 2016 350SXF. Dan sacrificed his first moto to stop and help the fallen Ron Lawson. Photo by Debbi Tamietti MXA’s Jody Weisel (52) is sandwiched between Brian Martin (65) and Bill Seifert. This is the 350SXF, but Jody also raced the 450SXF. Photo by Debbi Tamietti Although the weather was predicted to be in the 90s, it turned out to be in the high 80s with a chance of roost. Photo by Debbi Tamietti REM promoter Frank Thomason (551) likes to sample the product along with his customers. Photo by Debbi Tamietti We never question what Scalvini importer Pete Vetrano does. We have faith that he knows which way to lean to go around a right-hand corner. Photo by Debbi Tamietti Michelle Horton (357) obviously went to the Pete Vetrano School of Motocross. This balancing act was good enough for 2nd in the Over-50 Intermediate class behind Jerry Jetton. Photo by Dan Alamangos Pasha Afshar (L7) signed up for two classes. He made it halfway through one moto before jamming his back in a G-out and sitting out the rest of the day. He say’s he’ll be back for next Saturday’s 4th of July race on the AMA National track. Photo by Dan Alamangos As if they were not old enough already, the Over-60 Experts were the last race of the day. Here, third place Mike Marion (3) leads 6th place Tom Holmes (510). Photo by Dan Alamangos 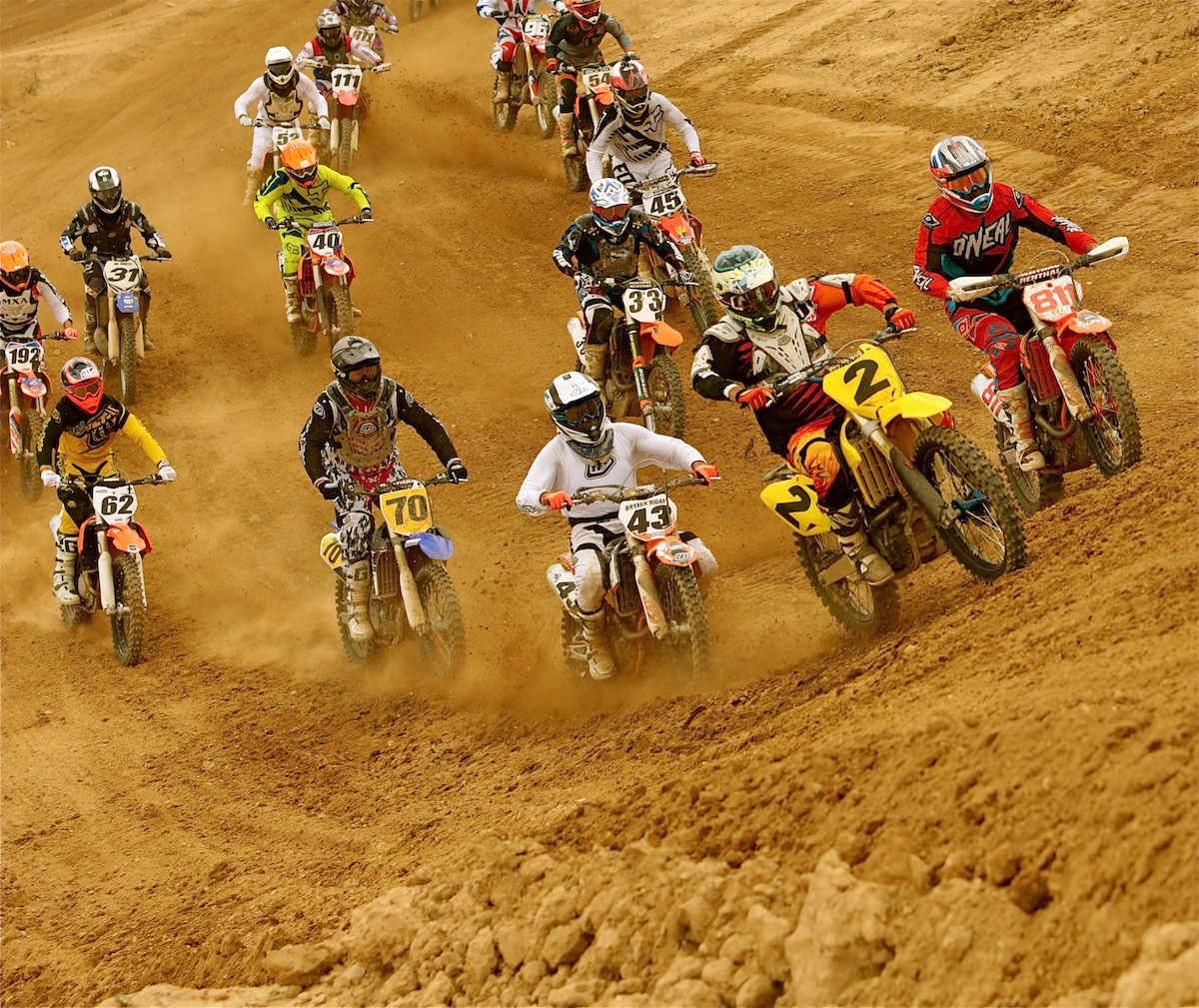 The Over-50 Experts come through the gulley on the first lap. Photo by Rich Stuelke