BRANDON HARTRANFT TALKS ABOUT HIS FIRST EVER PODUIM IN SUPERCROSS BRANDON HARTRANFT TALKS ABOUT HIS FIRST EVER PODUIM IN SUPERCROSS

This past weekend’s Supercross in St. Louis was huge for New Jersey native Brandon Hartranft as he took his first Pro podium by finishing third in the 250 West Coast Supercross results. Its not a shocker, as the 21-year-old was so close last year as a member of the Rock River Yamaha team. But now with the Factory KTM backing that he has with his Troy Lee Designs KTM team, Brandon knows its his time. With his sixth overall in the 250 East Coast Supercross Championship in 2019, and now in his third year as a Pro, Brandon is ready. We caught up with Hartranft just after the St. Louis press conference ended.

BRANDON, CONGRATULATIONS ON YOUR FIRST PODIUM. Thank you, it is an amazing feeling! It is funny because I qualified around twelfth, and only took sixth in my heat. So, it is amazing what a good start can do. I started the main in third, and then actually dropped back two positions. But then the two guys in front of me made a mistake, and I capitalized on that. I told myself when I was in third that I have to do this for myself and my team. I surely wanted to be on the podium, so it is awesome. WERE THE NERVES GETTING TO YOU AT ALL OR NO? Honestly, I think it was the best that I have ridden in my life. I was just really smooth and hit my marks. I was skimming the whoops every lap. Towards the end, I got a little tight because I was thinking too much, but that is all part of it.

Honestly, I think it was the best that I have ridden in my life. I was just really smooth and hit my marks.

WHEN YOU WERE ON THE ROCK RIVER YAMAHA TEAM LAST YEAR YOU HAD SOME GREAT RIDES. I THOUGHT YOU HAD A PODIUM FINISH IN YOU LAST YEAR. I really wanted to get a podium for them. I was on Rock River for two years and I really wanted to get a podium for them, but things just did not go our way. But I always believed in myself that I could be a podium guy. It was just a matter of doing it. I am actually third in points right now, so that is pretty sweet! Hopefully, I can just have a couple more good weeks, and be back up here where I belong. Brandon in 2019 in the Cycle Trader Yamaha team.

EVERYBODY ALWAYS SAYS THAT ONCE YOU GET YOUR FIRST PODIUM, OR YOUR FIRST WIN, THAT THEY BECOME EASIER. That is what a lot of people say, but I don’t want to get too over excited. I just want to use this podium to make the week a lot better and enjoy what I am doing. It is definitely good for the confidence. I think this week I will enjoy all the training much more. I am trying to have a great race next weekend, and the rest of the season.

FINISHING UP, ITS ONLY A COUPLE RACES IN, AND YOU FINISHED ON THE PODIUM, AND ARE THIRD IN POINTS; ARE YOU FEELING GOOD? To be on the podium is good. Obviously, everybody wants to win. Our team (TLD/KTM) is all young kids. I am the oldest kid at 21. Our team did not have too good of a season last year, so they went with some younger kids this year. I feel like I am the top guy on the team, so I wanted to do it obviously for them, but I wanted to do it for myself too. I feel this is a big steppingstone for everybody on the team. I’m really believing in myself now. 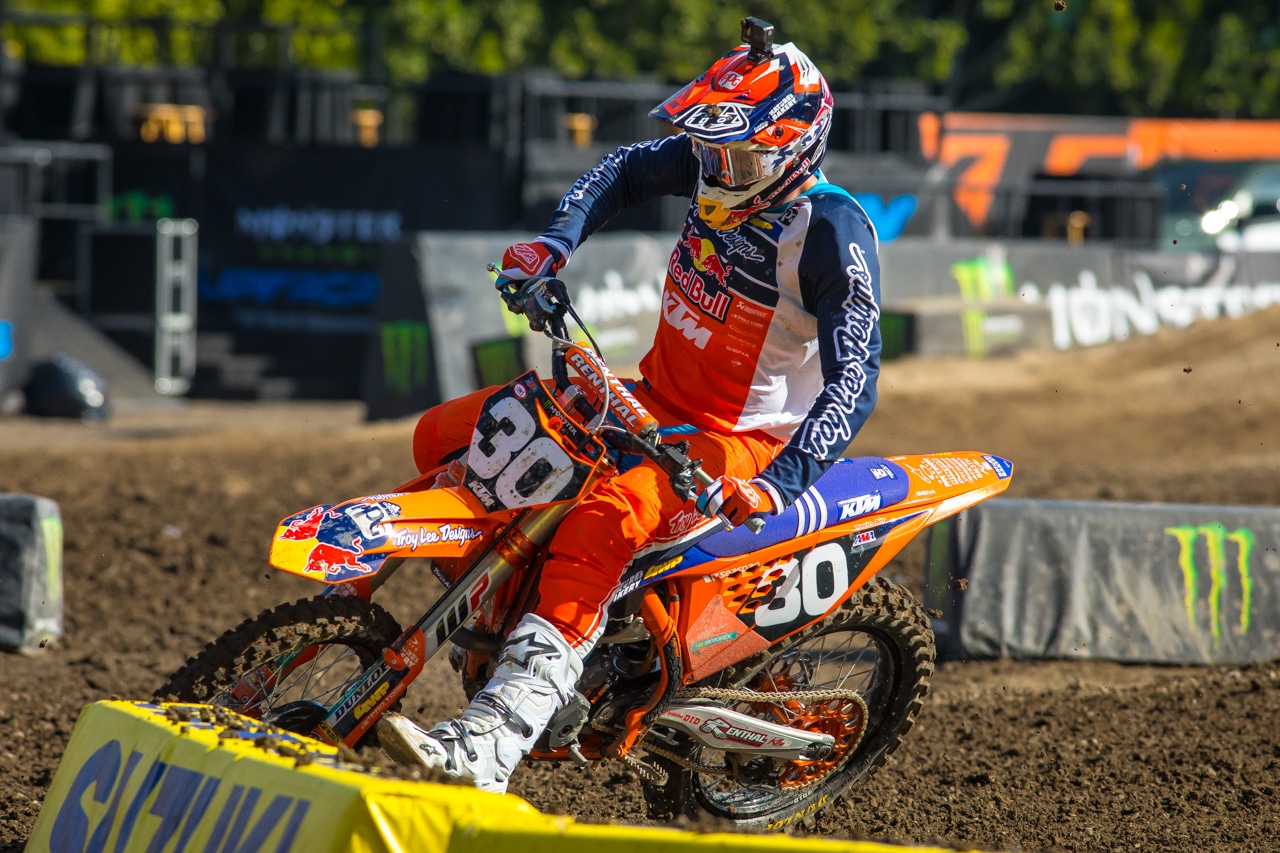